Blazing Saddles opened in theaters more than 40 years ago and it has secured a place on many lists of the best comedy movies of all time. It also happens to be one of the most offensive.

Included in our fascinating facts tribute are the truth behind Mongo’s horse punch and the one joke director and co-writer Mel Brooks thought was a bit too risque for audiences at the time.

It’s hard to imagine that a film as politically incorrect as Blazing Saddles would have a chance at being released by a studio as big as Warner Brothers today but it’s even harder to imagine the world of comedy without this gem.

1. The film had several titles. When Brooks was first approached about the film by CMA executive David Begelman the treatment by Richard Zanuck and David Brown was known as Tex X. The movie would then be changed to Black Bart before finally being called Blazing Saddles. The poster for Black Bart was posted in the background when Hedley Lamarr is on location at Grauman’s Chinese Theater.

2. Hedy Lamarr sued because of Hedley Lamarr. Actress Hedy Lamarr wasn’t happy with the character’s name similarity and sued Mel Brooks over the use of her name. The dispute was settled out of court and Brooks was able to keep Hedley in the film.

3. First time farts. According to the movie’s DVD commentary, Blazing Saddles marks the first time a fart recording had been used in cinema. Mel Brooks came up with the idea after noticing that cowboys in westerns were always consuming lots of black coffee and baked beans. A deadly combination around the campfire if there ever was one.

Those fart noises were made by using a little soap and the old stand-by of putting one’s hand under their armpit.

4. Governor LePetomane was named after a “flatulence artist.” The character of Governor LePetomane was named after 19th century French performer, Joseph Pujol, whose stage name was “Le Pétomane.” Famous for his abdominal muscles, his stage name combines the French verb péter, “to fart” with the -mane suffix, meaning “-maniac,” thus giving us “fartomaniac”. Supposedly he could blow out candles from two feet away.

5. Bart drawing his gun upon himself stemmed from Brooks’ childhood. The scene was based upon an childhood incident where Brooks had stolen some gum and a toy water pistol from a drugstore. Upon being caught by the store clerk, Brooks pulled his stolen water pistol on the clerk in an attempt to back out of the store.

6. Brooks only gave the studio one of the cuts they wanted. The studio pushed for many cuts because of offensive language, but in the end Brooks only cut one scene from the film: Lily and Bart are in a dark room and Bart says, “You’re sucking on my arm.”

7. The movie didn’t test well with the studio. Not surprisingly, the stiff WB suits didn’t warm up to the movie during a test screening, in fact, nobody laughed. It wasn’t until Brooks set up a screening for the blue collar Warner Brothers lot employees that the studio agreed to release the film after seeing the audience’s enjoyment of the movie. 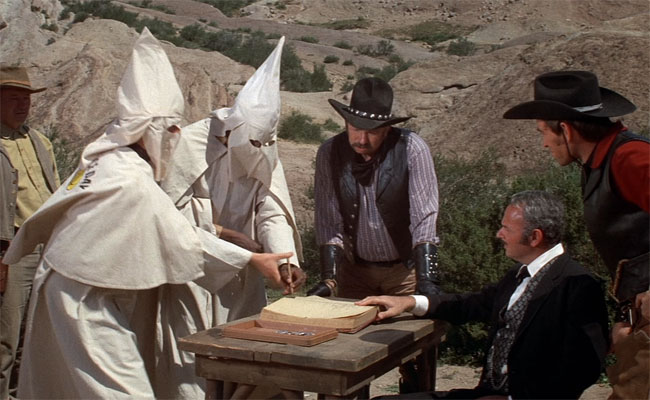 8. Burton Gilliam had hesitation at first about using the N-word. Understandably, Gilliam was uncomfortable about using the N-word to refer to Cleavon Little. To ease tensions, Little pulled Gilliam aside and assured him that it was okay before jokingly adding, “If I thought you would say those words to me in any other situation we’d go to fist city but this all fun. Don’t worry about it.”

9. Mel Brooks offered John Wayne a role in the film. According to IMDB, Wayne and Brooks crossed paths on the Warner Brothers lot and Wayne remarked to Brooks that he’d heard about the western parody. Brooks gave Wayne a copy of the script the following day and offered him a role, but Wayne turned it down saying, “Naw, I can’t do a movie like that, but I’ll be first in line to see it!”

10. The majority of the movie was written on the 6th floor of 666 Fifth Avenue in New York City. Brooks said that the movie cost about $2.5 million to make and at the end of the day he netted around $50k for writing and directing. He and the other writers were sure that the movie would be a bust because of the ominous location they worked out of, and would typically work until around midnight then go out for Chinese food.

11. Alfred Hitchcock was a fan of the film. In an interview with the A.V. Club in 2011, Brooks revealed how he had developed a friendship with the famous director and that Hitchock praised him for Blazing Saddles.

14. Brooks original choice for Bart was Richard Pryor. Originally Brooks wanted co-writer Richard Pryor to play the part of Sheriff Bart calling him “the most blessed with talent guy he’d ever seen in his life.” The studio was weary of casting him and suggested Cleavon Little much to Brooks’ satisfaction as he felt Little delivered the lines perfectly.

15. Richard Pryor and Mel Brooks became friends after meeting in New York. At the time Brooks was working on a show called Your Show Of Shows and approached Pryor after seeing him do stand-up at a club called The Vanguard. The two became fast friends and Pryor did most of the writing for Saddles’ character of Mongo.
16. Mongo’s horse punch was based on an actual event. Brooks worked with Sid Caesar on Your Show Of Shows and in Caesar’s 1982 biography, “Where Have I Been?” he details the story of how while riding on the trail with his wife their horse acted up and he slugged the horse between the eyes. He says it was this event that when told to Brooks was used in the film.

17. The horse punch, of course, came with some backlash. There were two horses on set that were trained to fall down, but that didn’t stop animal rights activists from sending Mel Brooks and the studio angry letters about the horse punch.

18. The director wasn’t shy about asking to see the goods. Brooks was a fan of Madeline Kahn from Paper Moon and in her audition asked her to pull up her skirt and show her legs. A nervous Kahn complied and Brooks explained that if she was going to play Dietrich she needed to have a nice set of legs and be okay with showing them off.

19. The first Waco Kid didn’t have to pretend to be drunk on set. Gig Young admitted at the time of the movie’s filming he had a drinking problem and the scene of Waco Kid hanging off a bunk and asking if Bart was back wasn’t acting. Young was really sloshed on the hooch. Brooks had to shut down production for a day and brought in Gene Wilder to take over the role.

20. Guests rode in horseback to the movie’s premiere. The film had its premiere at the now defunct Pickwick Drive-In Theater in Burbank, California where guests rode in on horseback for the event.