‘Anomalisa’ And ‘The Lobster’ Are Weird, Unmissable Movies About Love 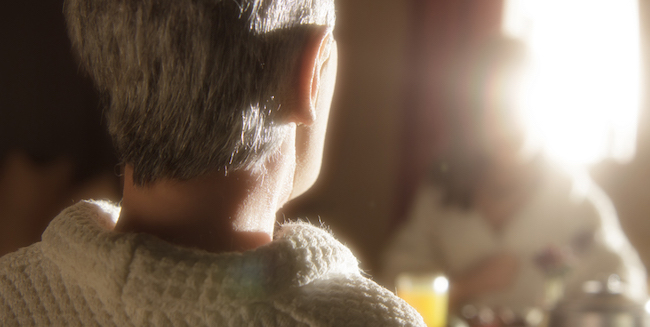 I don’t really say “hot damn” in normal life. I’m not sure I ever have except maybe ironically a few times. If I’ve said it, I don’t remember. I don’t want this to turn into an official inquiry. Regardless, I’ve been covering the Toronto International Film Festival for a full week now and I’ve had very little sleep. I’m not myself. But when I think of The Lobster and Charlie Kaufman’s animated Anomalisa, I think to myself, hot damn. So there it is now. In print. Hot damn.

Neither of these movies will be for everyone, even though I like to think that they are. Leaving The Lobster, a colleague and I joked, “That’s an old-fashioned throwback, the type of movie ol’ John Wayne would have done.” And, “A real meat and potatoes type movie — reeeeeaaaal salt of the Earth.” This made us laugh because we were low on sleep and they weren’t true. Both The Lobster and Anomalisa are weird movies in their own way. And both are about love and loneliness. And I can’t stop thinking about either of them.

Anomalisa — written by Charlie Kaufman and directed by Kaufman and Duke Johnson — is getting a lot of attention, sight unseen, for being a work of stop-motion animation starring puppets. There’s not a lot of imagery from the film out there — pretty much just the shot that runs at the top of this piece — so I wasn’t sure what to expect. Would this look like Thunderbirds? Or would it look more like Paranorman?

In truth, it resembles neither and it looks quite startling. The characters in Anomalisa appear both real and fake at the same time. They are obviously puppets, but they move like real people. When we see a wide shot of characters walking down a hallway, it’s spooky.

Michael Stone (voiced by David Thewlis) is a middle-aged man visiting Cincinnati on a business trip for the purpose of delivering a speech on providing good customer service. A good portion of this film is just Michael reacting to the mundane. We listen to him have a mundane conversation with a cab driver, watch him have a mundane experience with a hotel desk clerk, witness a mundane interaction with a bellhop named Dennis. We watch Michael take a piss. But, in Kaufman’s hands, the ordinary becomes fascinating.

Early in the movie it becomes apparent that everyone Michael meets kind of looks the same. And both the men and the women he meets  all sound the same. They’re all voiced by Tom Noonan, who doesn’t even try to differentiate his voice from character to character. When Michael’s wife calls, it’s still Noonan’s voice. To Michael, everyone has become the same. He’s trapped in his own personal hell in which nothing is interesting.

Michael meets Lisa (Jennifer Jason Leigh), a woman staying at his hotel who’s in town to see Michael’s speech. I hesitate to go much further here because A) watching this film knowing as little as possible is a great experience and B) of all things, Paramount just unexpectedly bought this movie and will be releasing it before the end of the year. You will get a chance to see it and you should. (Though, I am already imagining a child asking his or her parent, “Daddy, I want to see the movie with the puppets.” Then smash cut to that poor father’s reaction when one puppet is performing cunnilingus on another puppet. Charlie Kaufman, everybody.)

Parts of Anomalisa reminded me of Lost in Translation — an older man and a younger woman, connecting while both are away from home. The connections aren’t the same, but the deft way the characters are treated – the empathy we feel for everyone – is truly remarkable.

(As an aside, I got a serious case of the giggles during the movie when Michael passes two characters in the hallway having an argument – their argument only consisting of each character saying “fuck you” to each other over and over.)

Yorgos Lanthimos’ The Lobster is a different beast. The film begins with a man named David (Colin Farrell) being dumped by his wife. It takes a little bit of time to figure this out, because it’s never really explained, but it seems that in whatever world David lives, a human must be paired with another human by law. Those who aren’t paired are sent to a special hotel in which they have 45 days to find a partner. Those who don’t are then changed into an animal of his or her choice and sent off alone into the wild. David chooses to be a lobster.

The Lobster is a metaphor. I separated this sentence from the paragraph above in order to emphasize my obvious statement.

Again, I’m starting to feel on the edge of not wanting to say any more. Rachel Weisz plays a woman David meets, but I don’t even want to mention how because it would give too much away.

(As a second aside, my next biggest laugh at this festival came during The Lobster.)

This might be Colin Farrell’s best work. He’s an actor I admire but one who’s been bogged down for a while in crap like the Total Recall reboot or nonsense like the second season of True Detective. Here, Farrell is the most passive I’ve ever seen him. He has a real humanity to him and I want to see more of this out of him in the future.

Anomalisa and The Lobster are two of the best movies I’ve seen about love and loneliness and I just happened to see them within a few days of each other. In Anomalisa, Michael is punished internally because he feels alone. In The Lobster, David is literally punished for being alone. Both of these movies are about all of us, really, and both of these movies need to be seen.