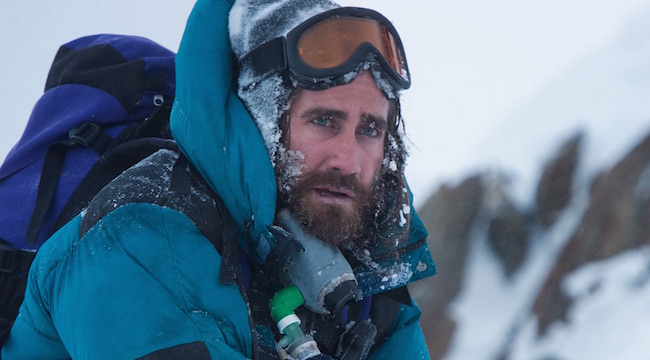 Mount Everest is fascinating, even though I have no desire to ever climb a mountain. (It’s hard not to be fascinated by something that uses the term “Death Zone” in such a willy nilly way.) Yes, I get that it must be exhilarating to stand on the highest point on Earth, but I’ve been in a plane, I think I get the gist – plus, it’s much less expensive and my chances of dying are considerably lower. Unless there’s treasure buried at the top of these mountains, I really don’t understand why anyone would want to climb to the top of them. The odds of dying while climbing Everest differ based on how it’s calculated, but seems to break down at about one for every 61 attempts — and people pay thousands of dollars to take this risk. It’s so dangerous that, if you die, they just leave your body there. It’s like riding Space Mountain and seeing a trail of dead bodies from the people who didn’t finish Space Mountain.

This is something that a viewer will have to wrap his or her head around while watching people fight for their lives in Everest (in theaters September 25). This isn’t a plane crash; no one forced these people to climb the tallest mountain in the world… their fight for survival was completely their own doing.

I have a friend who I will refer to as “Kirk” (because that’s his name). He likes to climb mountains. For the life of me, I will never completely understand his obsession, yet, as I said before, I find it fascinating. He once told me about a time that he was a few hundred meters from summiting, but had to turn around because he started to go blind. Nothing about that sentence sounded appealing. But when he talks about climbing mountains, it’s with the same kind of passion that’s in my voice when I talk about things that I like. (Most of the things I like are indoors.) To fully embrace what we are seeing in Everest, it helps to have a friend like Kirk. It helps to understand, just a little, why these people are doing what they’re doing.

Everest takes us back to 1996 to what was, at the time, the deadliest day on the mountain. It can be a frustrating movie to watch because so many mistakes are made by the climbers and their guides – mistakes that even I know are cardinal sins just from talking to Kirk. For instance: A character starts to go blind, which is huge red flag, and that person should be sent down the mountain immediately. In Everest, this character is told to just hang out for awhile, and if he’s feeling better to keep climbing. This kind of thing happens a lot in Everest: Mistakes and risks that we know will result in doom. At times, it’s hard not to yell at the screen, “Oh, c’mon!”

One of the problems is that there were a lot of climbers on that day, which means there are a lot of characters in this movie – a lot of characters wearing similar-looking coats with their faces covered. (Everest has a lot of scenes in which characters will remove their hoods or oxygen masks or face masks for the camera in a, “hey, it’s me!” kind of way.) The main group we follow is led by a joint effort between Rob Hall (Jason Clarke) and Scott Fischer (Jake Gyllenhaal, who has a much smaller role than you would expect), two owners of competing Everest hiking companies who happened to combine forces on this day. With them is Beck Weathers (Josh Brolin), Doug Hansen (John Hawkes) and journalist Jon Krakauer (Michael Kelly), who is there to write an article on the experience of climbing Everest. (Pretty much everyone who survived on this day wrote a book about their experiences, Krakauer’s Into Thin Air is the most well-known.)

Again, many mistakes are made. Remember that ominous sounding “Death Zone?” This is the height that humans can no longer survive because the air pressure is too low. The peak of Everest, which extends into Earth’s stratosphere – so high that the jet stream hits it – has to be summited by a specific time so that there’s enough time to get back down before a human being dies. These rules are pretty much ignored, then one of the fiercest storms on record hits the mountain, stranding the climbers.

It’s at this point that your brain starts telling you, “Oh, yeah, they didn’t just volunteer for this, they all paid thousands of dollars to do this. They knew the risks.” Everest is immensely thrilling and is beautifully shot (and it’s one of the few times I’d recommend watching a movie in 3D). And not knowing who survives and who doesn’t beforehand, I did find myself rooting for the characters — you know, real people — but there really is that nagging feeling of, “They put themselves in a position where they knew they might die, and now they might die.” Even so, it doesn’t diminish just how tense Everest is… and, boy, is it ever tense.

I do wonder if anyone will watch Everest and think to themselves, You know, I want to give this a shot. I would guess “no,” but people who climb mountains are wired differently than I am. Even when things are going well, before disaster hits, there’s no part of me thinking, This looks great. I now want to climb a mountain. Watching Everest is all the experience with Mount Everest I will ever need.