Richard Linklater’s ‘Everybody Wants Some!!’ Is Every Bit As Good As ‘Dazed And Confused’

Everybody Wants Some!!, the new film by Richard Linklater, is being billed as Linklater’s “spiritual sequel” to his 1993 classic, Dazed and Confused. As it turns out, this is an accurate description. None of the characters are the same, but it’s the same thing: kids hangin’ out. In Dazed and Confused, it was a bunch of high school kids over the course of one day; in Everybody Wants Some!!, it’s a bunch of college kids over the course of three days.

Everybody Wants Some!! has no plot. I couldn’t spoil this movie for you if I tried. There are no great revelations or any twists and turns. Plot is overrated. Have you ever watched a movie and really enjoyed the first few minutes when it’s just the characters hanging out and you really like these characters and you just want to watch them hang out – then the plot starts? (When’s the last time you watched Weekend at Bernie’s? The whole first act takes place in New York City and it’s great because not much is happening, but the characters are fun. Then the plot kicks in.) Everybody Wants Some is a lot like one of those types of movies, only the plot never kicks in. (Yes, a lot like Dazed and Confused.)

I think I can sum up the plot in one sentence, so let’s try: It’s the Friday before classes start on Monday at a Texas college in 1980 and the school’s baseball team moves into their campus housing and wants to have some fun before Sunday practice. I did it. That’s it. It’s fantastic. I could watch another 10 hours of these people hanging out.

Everybody Wants Some!! is a weird movie to watch for the first time, because you know you’re going to be watching it dozens of more times over the course of your life and you will be immensely familiar with all of these characters. But, this first time, you are not. So, instead of trying to weave in all the characters’ names into narrative paragraphs that you won’t understand anyway, let’s just break down some of the major characters (but not all because neither of us have all day) one by one. Consider this your prep guide before seeing the film: 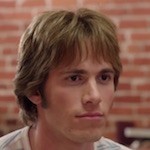 Jake is basically our main character, he’s a freshman pitcher who is just meeting his new teammates for the first time. He’s also keen on a girl he meets, Beverly. He’s the “nice guy” heart of the movie. 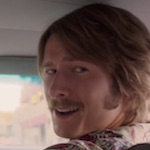 You will want to be friends with Finnegan by the end of the movie. He’s cool without being pretentiously cool. He’s the guy who knows just how to react in every possible situation – well, at least in college. He’s one of the team’s leaders and will probably be President of the United States some day. Rocks an awesome mustache. 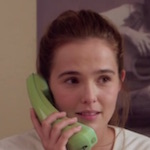 Beverly is a freshman performing arts major, so basically the opposite of anyone who plays on the baseball team. Well, except for one thing: She, like, Jake, was the best at her high school, now she’s competing with a bunch of people who were all the best at their high schools. 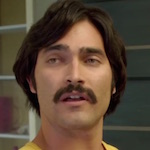 McReynolds is the Alpha Dog of the team. He plays center field, is a pro prospect, is by far the best player, and he can swing an axe for a bat and cut a pitched baseball in half. McReynolds is so competitive, he won’t even befriend the pitchers on the team just in case he ever has to face them in the pros. He would never want to give them “an edge.” 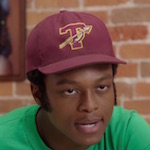 The team’s second baseman and another relative big shot – but he’s also someone who feels sorry enough for the freshmen that he will often try to give them advice. He also wears a cowboy hat really well when they all go to a local honky tonk.

He’s kind of somewhere in-between McReynolds and Finnegan in how he treats incoming freshman. He’ll play Alpha Dog when McReynolds is around, but at heart he’s just a nice guy. He also loves rapping along to The Sugar Hill Gang. 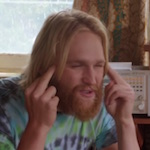 He’s kind of the Wooderson of this movie in that he pops in and out just to say some weird yet memorable things, plus he’s the oldest player on the team. (It’s his first year on this team; he a pitcher who transferred from a California school.) He’s also the team’s resident stoner. 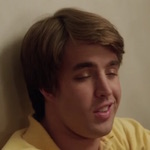 Another incoming freshman and the team’s new catcher. He’s kind of the resident “dumb guy” (but also responsible for the biggest laugh I had in the entire movie). 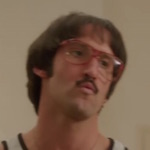 A perhaps legitimate crazy person who transferred to the team from Detroit. The rumors are he can hit 95 on the radar gun, at least when he’s not getting into fights at bars or into fights with teammates. Every scene he is in is fascinating.

There are many more interesting characters, but this will have to get you though for now. Frankly, there just aren’t enough photos from the movie available to go into the rest yet — like Billy Autrey, a good ol’ boy who is the butt of everyone’s jokes, basically because no one knows him very well because he leaves to spend the weekend with his girlfriend. And you know what, that’s the way these things work in college: whoever isn’t around is the odd person out. And when you’re watching Everybody Wants Some!!, yeah, you’re going to sort of feel like you’re in college again. Only it’s 1980 and you’re listening to a lot of The Knack and a lot of Sniff ‘n’ the Tears. Again, if you liked Dazed, you will probably watch Everybody Wants Some!! 100 times before you die… and it’s just as good.