‘Fantastic Four’ Is Not The Worst Superhero Movie Ever, So There’s That 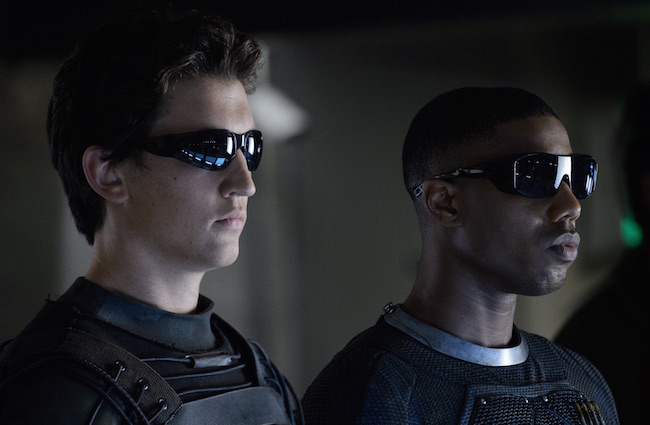 The overwhelming majority of Fantastic Four takes place inside a building. While watching a movie about a team of superheroes with quirky superpowers, this proves to be both frustrating and inconceivable. At times, I wanted to yell at the screen, “Come on, please just go outside.” (Watching a person with the ability to set himself on fire and fly is best enjoyed against the backdrop of anywhere that’s not an underground bunker.) While watching Fantastic Four, I often found myself wishing we were watching the much-maligned 2005 version instead. I honestly never thought I’d feel that way in my lifetime. But, at least they went outside.

If you decide to see Fantastic Four, I hope that you are fascinated by interdimensional travel, because, boy, are you going to hear a lot about it. “Interdimensional” seems to be a popular fallback when filmmakers don’t want to use “outer space” for whatever reason. The same thing happened with Indiana Jones and the Kingdom of the Crystal Skull: George Lucas wanted aliens; Steven Spielberg and Harrison Ford didn’t want aliens; the compromise became “interdimensional beings.” It all works just about as well in Fantastic Four.

Fantastic Four begins in 2007, when we meet young Reed Richards (who will grow up to be played by Miles Teller) giving a speech about teleportation to his fifth-grade class. (Yes, in 2007, the real Miles Teller was 20; no age timeline that’s established here ever makes sense, so don’t even try.) Here, he meets young Ben Grimm (the future Jamie Bell), and the two conduct experiments in Reed’s step-father’s garage, sending matter to an unknown place. It’s fun. This is a fun scene. I wish the whole movie had been about these two kids doing conducting experiments out of a garage. It’s at this point in the movie you will be thinking, “Oh, this isn’t so bad.”

Reed is recruited by Dr. Franklin Storm (Reg E. Cathey) to build a teleportation machine on a large scale at the Baxter Institute. You see, Dr. Storm has also been working on interdimensional travel alongside his adopted daughter, Sue (Kate Mara), and a misanthrope named Victor von Doom (Toby Kebbell), who I’m sure is nice and will cause no problems later on in this movie.

I would have loved to have been in the writer’s room when the idea for interdimensional travel was pitched. I imagine it went something like this…

“I have a great idea. Instead of sending the Fantastic Four to space to get their powers, we send them to a planet in another dimension.”

“Oh, a planet in another dimension? What will be on this planet? Will we meet a new alien species?”

“OK, will there be some sort of interesting time-space problem or a big tidal wave?”

“So, what will be happening on this interdimensional planet?”

I suspect the interdimensional planet was named Planet Zero because there are zero things to do there. Regardless, everyone wants to go there really bad. So, after a night of drinking, Victor, Reed and Dr. Storm’s son who has been helping out, Johnny Storm (Michael B. Jordan), all get mad that they don’t get to be the first ones to use the interdimensional machine, so they decide to just go. Out of the blue, Reed invites Ben (who has really nothing to do with any of this), and off the four go to Planet Zero. So, yes, Doctor Doom literally gets everyone drunk, which sets off all the problems. Let that be a lesson, kids: If you drink alcohol, you will one day be Doctor Doom.

Speaking of Victor von Doom: In an early interview, Toby Kebbell said his character would be named Victor Domashev, a computer hacker who used “Doom” as his online name. None of that is in the movie. Fantastic Four underwent some pretty infamous re-shoots, and it’s apparent that the re-shoots scrapped any mention of “Victor Domashev.” It’s weird, because the first time we meet Victor, he has long hair and is wearing some sort of Google Glass-type device while sitting behind maybe five computer screens. The next time we see him, he’s clean cut and computers are never mentioned again. I bring this up because Victor is in a good portion of the second act, so this movie really did go through quite a few changes. (Another way to tell if it’s a scene from the re-shoots is watching Kate Mara’s hair, because she’s often wearing an obvious and very distracting wig.)

Anyway, poor Victor doesn’t make it back from the interdimensional planet (don’t worry, we’ll see him again; his last name is “Doom,” after all), while Reed, Johnny and Ben return, but now all have weird abilities. (Sue, who didn’t even go on the mission, gets hit with a bolt of something or other, so she gets powers, too.)

So, after all this, the movie finally seems like it’s about to get interesting. Of course, the story now jumps a year ahead, because who wants to get bogged down with all of these people learning about their powers? But that’s where we are: The first half of the movie takes place inside as they build the machine, and the last half takes place underground at Area 57 (as opposed to Area 51, I guess), where the government can keep an eye on everyone. I guess no wonder everyone wants to go to Planet Zero so bad; it’s the only opportunity to get some fresh air.

The ending of Fantastic Four kind of has to be seen to be believed. I don’t think it’s much of a spoiler to mention that Victor von Doom comes back as Doctor Doom. But it’s so late in the movie, the final showdown is strangely short. And Doctor Doom doesn’t have much of a plan other than to “destroy Earth,” but he never gives a reason why he’s doing this other than “I’m mad.” Honestly, I don’t think I could spoil the ending if I tried because it makes no sense and has nothing much to do with the rest of the movie. It feels like an ending tacked on because someone mentioned, “You know, we never really show any of the Fantastic Four using their powers, so maybe we should do that?”

So, yes, we get an ending where the Fantastic Four – four supposedly interesting people with cool powers – fight a battle in an underground bunker, then on a barren interdimensional planet.