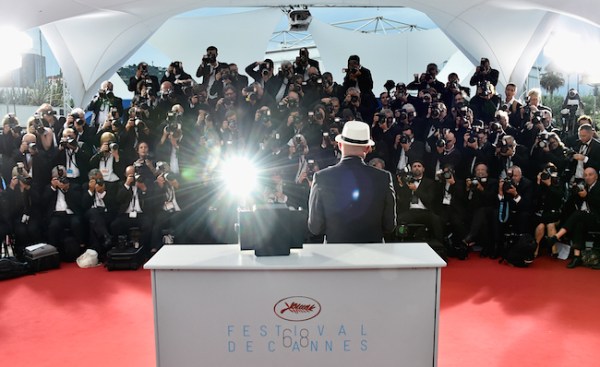 In a tidy, full-circle sort of conclusion to a long journey, the 2015 Palme d’Or winner Dheepan premieres in American theaters this Friday, a few short days before the 2016 proceedings are set to begin. It’s an excellent film, an uncompromising depiction of the struggles that immigrants to France face as seen through the life of a humble but violent Tamil refugee. Director Jacques Audiard conjures a brilliant performance of nuance and fury from leading man Antonythasan Jesuthasan, and the social themes couldn’t possibly be more timely as the U.S. prepares to nominate a xenophobic despot for the office of president. But even though it won the most prestigious award at the festival, this film has still been stuck with a relatively low profile, especially in comparison to other selections from last year’s slate such as the harrowing Holocaust drama Son of Saul or Todd Haynes’ lovingly wrought lesbian romance Carol.

Among the Cannes breakouts elevated to international acclaim by a Palme win — your Pulp Fictions, your Apocalypse Nows, your Taxi Drivers — are scores of fine films that fade from memory after their big night on the Croisette, either due to a lack of crossover appeal beyond cinephiles (the Romanian illegal-abortion drama may not be for everyone) or just the way the wind is blowing. Either way, we’ve singled out seven Palme d’Or recipients from across the years in need of rediscovering, whether that’s from young cinephiles or anyone looking for a little change of pace from Hollywood’s usual offerings. See you on the promenade.

Black Orpheus (1959)
The hectic gangster epic City of God has come to define Brazilian cinema for many audiences, its unsparing depiction of the violence in the impoverished favelas offering a searing street-level report on a harmful system breeding more harm. For a warmer vision of the streets of Rio, skip back a few decades to this bubbly musical translating the myth of Orpheus and Eurydice to Brazil in the midst of their annual carnival festivities. The bossa nova soundtrack from Antonio Carlos Jobim and Luiz Bonfa is a classic all its own, with Bonfa’s “Samba do Orfeu” achieving a semblance of popularity both at home and abroad. But in the breaks between fits of joyous dancing, viewers can drink in a gorgeous, painterly take on the exuberant local culture while exalting in an ages-old love story rejuvenated through the power of song.

The Umbrellas of Cherbourg (1964)
Another musical, this one steeped in melancholy beneath its infectiously catchy soundtrack. Michel Legrand’s feather-light pop compositions spell love at first sight, both for the listeners incapable of resisting his sprightly horns and decadent strings, and for the hopeless romantics muddling through the banality of life onscreen. A young Catherine Deneuve stars as a French teen suffering from an incurable infatuation with the hunky Nino Castelnuovo, but the vicissitudes of fate have other plans for the blossoming romance. A war, a pregnancy, and the darkness of mere being conspire to drive them apart, and the film rolls with this cold dose of reality, following them both as they accept that they’ll have to go on independently. Bittersweet and comforting all at once, Jacques Demy’s masterpiece is a burst of pure cinematic pleasure.

if…. (1969)
As America readied itself for Woodstock and continued chasing the summer of love, Lindsay Anderson channeled that same counterculture spirit into a blackhearted autumn of hate. The personification of toxic masculine energy, Malcolm McDowell portrays an angry young man fed up with the authoritarian regime at his draconian boarding school in the role that undoubtedly earned him a spot in Kubrick’s A Clockwork Orange one decade later. He goes the usual guy stuff — the ’60s British equivalent of bro-talk, sneaking nips of alcohol where he can find them, fantasizing about naked wrestling with cute girls at cafes — but the explosive, violent finale pushes this film into the ranks of the all-time greats. The blackly satirical orgy of gunfire set on a school campus has grown more sickening and discomfiting with every new spree, just as Anderson foretold.

The Mission (1986)
This reverent religious drama got lost in star Robert De Niro’s cavalcade of sterling work during the ’80s. But while it may not have the staying power of a Raging Bull or a The King of Comedy, there’s plenty to prize in Roland Joffe’s historical hymnal. De Niro, Jeremy Irons and Liam Neeson (talk about a holy trinity) play Jesuit missionaries tromping into the jungles of Argentina to convert the locals. While the shifting politics of the film have slightly undercut its morality — they may be imposing Western culture on the Guaraní people, but at least they’re not slave traders! — its interludes of breathtaking beauty have aged much better. A giant wooden crucifix toppling over a rushing waterfall, Irons casting a spell over the natives with his oboe music, and De Niro’s agonizing cycle of sin-penance-redemption can all stand comparison to any of Martin Scorsese’s ’80s output.

Taste of Cherry (1997)
A middle-aged man drives around Tehran. He’s looking for someone to help him die, an accomplice to throw the ceremonial dirt onto his corpse after he’s taken his own life in the grave he’s dug for himself. Director Abbas Kiarostami, a central pillar of the Iranian New Wave, never reveals why he’s decided to shuffle off his mortal coil, because that couldn’t be farther from the point. The interactions between our man and the characters that pass through his vehicle run the gamut from last-ditch empathy to disinterest to discomfort to religious objection, painting a sort of moral portrait surveying present-day Tehran. Ebert infamously savaged the film in his Cannes review, calling it a “bore,” and while the film is certainly slow, viewers willing to calibrate themselves to Kiarostami’s wavelength will be rewarded a moving and deeply complex experience.

Wild at Heart (1990)
Those in the know think of the paranormal-mystery classic Twin Peaks when they reflect back on David Lynch’s output during the ’90s, and even diehard Lynch fans tend to go to the Mulholland Dr. warm-up Lost Highway when pressed about the auteur’s finest work in the decade. But while it may not have the biggest fanbase, this meth-addled distortion of postwar Americana romance has Nicolas Cage, and that’s really all that matters. He’s the Sailor to Laura Dern’s Lula, a pair of lovesick rebels without a cause that raise the consternation of the parents who just don’t understand and send psycho-killer Willem Dafoe to retrieve them. It’s a surrealist’s recapitulation of teen angst from a man who seems to exist outside our human parameters of time, and it features one of Cage’s all-time great performances, from the glorious era when he was actually trying.

Elephant (2003)
This fall, Pureflix’s I’m Not Afraid will re-stage the horrifying events of the shooting at Columbine High School with a focus on one brave girl who wouldn’t let a gunman’s barrel pressure her into turning her back on the Lord. The high-water mark against which that film will be measured is Gus Van Sant’s Elephant, a quiet and sensitive chronicle of the hours leading up to a Columbine-modeled rampage at a fictitious Oregon high school. The title comes from the old parable about the three blind men touching different parts of an elephant and imagining three different animals; in the same way, Van Sant shoots the same scenes occurring during the same time spans from multiple characters’ perspectives, amounting to a surprisingly apolitical retelling of one nightmarish day. The suggestions of homosexuality between the shooters come out of nowhere and vanish just as quickly, just one more transfixing element in this clean, composed take on modern evil.