Joel Kinnaman On ‘Run All Night,’ ‘Suicide Squad,’ And What Went Wrong With The ‘RoboCop’ Reboot 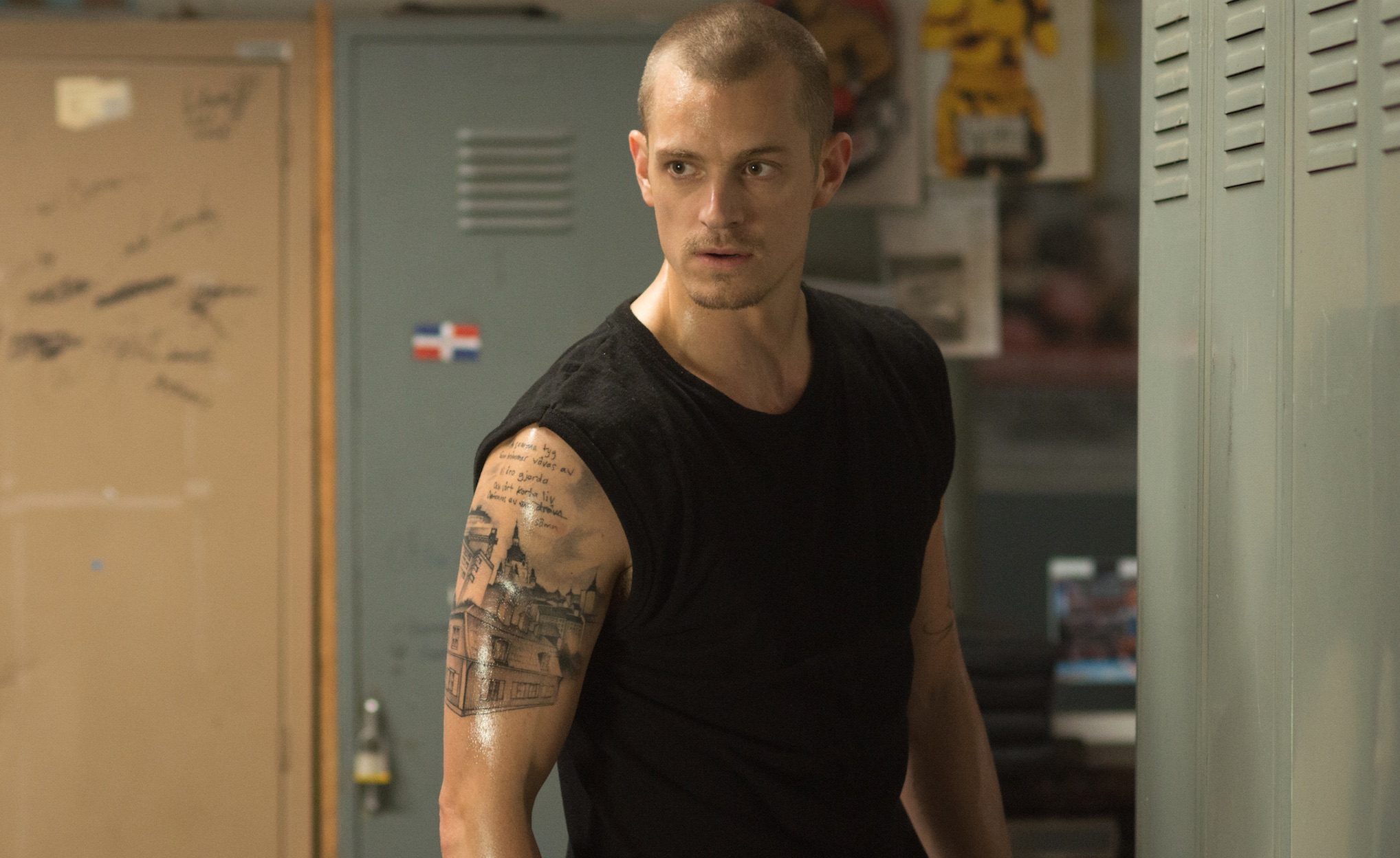 Joel Kinnaman wants you to know that he doesn’t get “taken” in this week’s new release co-starring Liam Neeson, Run All Night. Of course, it’s the Liam Neeson aspect of this equation that has people asking Kinnaman things like, “Oh, instead of his daughter, now it’s you that gets taken?,” which has been frustrating for the Swedish-born actor. (I can back Kinnaman up here, he does not get “taken” during Run All Night.)

Kinnaman became known to American audiences with his performance in the Americanized version of The Killing, playing the brooding detective Holder. Kinnaman parlayed his popularity as Holder into supporting roles in movies like David Fincher’s The Girl With the Dragoon Tattoo and the Denzel Washington vehicle, Safe House.

It was a big leap for Kinnaman to take on the starring role as Alex Murphy in the 2014 RoboCop reboot, a movie that still wound up grossing just under $250 million worldwide, but didn’t leave a huge impression on audiences or critics. Kinnaman looks back on RoboCop now and acknowledges there were mistakes – not being rated R is a big one – but certainly has no regrets.

Next year, he’s part of Warner Bros. and DC’s ambitious superhero slate of movies, co-starring with Will Smith in Suicide Squad, playing Rick Flag, a character that Kinnaman admits he didn’t know before he took the role. (To be fair, Flag isn’t exactly one of the more prominent characters in the DC universe.)

In Run All Night, Kinnaman plays Mike Conlon, a man who finds himself on the run from the mob and the police after witnessing a murder that he’s been framed for committing. Eventually, he accepts help from his estranged retired hitman father (Liam Neeson) as the two are basically now trying to avoid contact with pretty much everyone.

Ahead, Kinnaman reveals that he can do a pretty great Liam Neeson impression, discusses his upcoming role in Suicide Squad, speculates what went wrong with RoboCop, and he doesn’t seem upset in the least that he was cut out of Terrence Malick’s Knight of Cups. Oh, again, he swears he doesn’t get taken in Run All Night.

When you sign up for a movie with Liam Neeson, do you just assume you’re getting punched at some point?

[Laughs] I mean, I knew right off the bat that it’s a father-son story and that’s what very much drew me to the film. I’ve always gravitated toward father-son stories; I always find them moving and emotional, so I was stoked to play Liam’s son.

Why are you drawn to father-son movies?

Well, I don’t have any friends or any men that I know that haven’t had a complicated relationship to their father at some point in their life… It’s at the core of our emotional being and when we see stories about that, it connects with us.

I was worried Run All Night was going to be like Taken 3, which just came out a couple of months ago. This is not Taken 4.

That’s been a little frustrating talking to people before they’ve seen it, because that’s what everybody kind of expects and it’s like, “Oh, now it’s you instead of the daughter.” And I’m like, “Nah, not quite.”

You do not get taken.

But you are teamed up with Liam Neeson the whole movie, you guys get to run around and wreck havoc.

And I can tell you, it’s a lot of fun being on the run with Liam.

What are you guys talking about between takes?

We talk about everything; he’s actually really funny. And after we became friends, then we started messing with each other and doing little pranks and tripping each other up before scenes. I’d be like, “Okay, old man, don’t get a heart attack now because we have to move on this one.”

I’m guessing he doesn’t like being called “Old man.”

[Laughs] No. That’s why I call him that.

I embarrassed myself completely.

What did you do?

There’s this scene in which they’re arguing over the kitchen table. And Nick is leaning over and he’s screaming to Liam, “I’m talking to you!” and Liam grabs him by the collar, “And I’m listening!” And my character is supposed to walk out and leave him, and Liam turns and says, “Mike, don’t go.” But every time they were battling in the kitchen, I just stood and watched them. Then when Liam turns around, I’m just standing there looking at him, eating popcorn pretty much. And he’s like, “Joel!” And I’m like, “Oh, shit, sorry!” And then I did that three times in a row.

You could go on a one man tour doing your Nick Nolte and Liam Neeson impressions.

[Laughs] Yeah, I’ll take it on the road.

Last time we spoke was at Comic-Con before the new RoboCop came out. I know you were excited about that. Was it disappointing that it underperformed?

Hindsight is 20/20, but it’s a tricky thing when you do these remakes. Because if you’re going to do a remake, the only reason that you should do a remake is if you have a new idea. Otherwise, if you’re going to do a remake just to sort of do more special effects, than I think it’s a cynical… You know, there’s always going to be a cynical, moneymaking element when doing a remake, it’s got the built-in property and that’s the reason those get made. But, the filmmaker who actually does it has to come from a different place and wants to tell something more. And if you are a filmmaker and you want to do a remake, then you have to have sort of a new idea.

If we move this character to a different time – the 25 years that have passed – what can that tell us about society? And I thought that Jose Padilha had a really interesting vision for that. But, then, at the same time, when doing these kind of comic book, these beloved characters, you also have to be really aware of what about it the fans love so much. And you have to understand that and sort of build your new idea on that.

What we did wrong on RoboCop, we just did something new and didn’t really take into account what the fans really loved about the original. I think that we should have gone and found more humor and more charm in it. And it’s tricky doing a movie like RoboCop at PG-13. Maybe we shouldn’t have changed the suit and we should have done it rated R and do it with a smaller budget – I think people would have given it a much bigger chance. But, with all that said, as a film, I’m really proud of it. I think it’s a really good movie that has really interesting concepts.

You mention being aware of what the fans want, how does that play into what you want to do with Rick Flag in Suicide Squad? He’s not a super known character, so maybe you don’t have to worry about that as much and you can really own it.

Yeah, for sure. And you want the backstory of the character, but I think this is also a universe that David Ayer is going to create – there’s a lot more. Also, when you’re doing the first movie in a comic book, you always have the leeway of you’re going to move it from a comic book to a film and put it in real life – you’re always going to make a lot of changes and create a new universe. So you’re kind of setting a precedent. When you’re remaking a movie that’s already been made and a character that was made for the film, then it becomes a different thing and it’s more difficult to create something new without offending some people.

Were you familiar with the character of Rick Flag before this came up?

I know hardcore comic book fans who don’t know him that well.

I reached out to my guys, like Daniel Espinosa, who did Child 44 and Safe House and Easy Money. He’s a comic book authority; he’s read every Marvel comic since 1982. When he’s with Marvel people, he’s like, “No, that character had his golden age between 1984 and 1986 when so and so wrote that arc.” And even he wasn’t completely sure.

Maybe because he was too busy reading Marvel instead of DC.

Yeah, he’s more a Marvel guy, but he knows the DC stuff, too.

If nothing else, at least you didn’t have to get your hair cut on social media in front of the world.

You filmed scenes for Terrence Malick’s Knight of Cups, did you know before you saw it if you had been cut out or not? I know with Malick, an actor never knows…

I still haven’t seen it. I don’t think I’m in the movie.

No, no, not so sorry. I didn’t feel too comfortable.