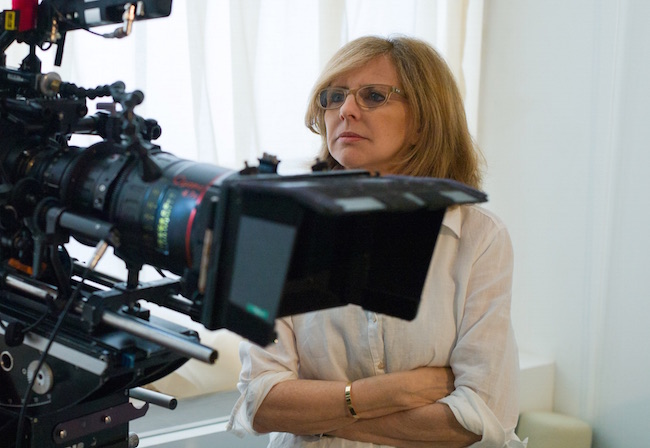 Even though Nancy Meyers is Nancy Meyers, it’s still a wonder to look at just how much she’s contributed to popular culture. Even looking further than immensely popular films that she’s directed — It’s Complicated, Something’s Gotta Give, What Women Want, to name a few – her imprint on culture also includes Father of the Bride, Baby Boom and Private Benjamin (Meyers is not a fan of the proposed possible remake starring Rebel Wilson) — all movies that have lived well beyond their release date.

Meyers’ The Intern stars Anne Hathaway as Jules, a successful owner of a popular online clothing store. Robert De Niro plays Ben, a retired widower looking for something to do, so he applies for Jules’ “senior intern” program. In lesser hands (Meyers kind of scolds me for using this term during this interview, but I’m going to use it again here anyway), The Intern could have easily fallen into the trap that Ben doesn’t understand technology because he’s older and Jules is mean. As Meyers explains, the “mean female boss” is a character that she finds offensive.

As an aside, a story Meyers told me in the middle of this interview made me laugh harder than I ever had before doing this job. In The Intern, there’s a scene where a group, led by Robert De Niro, breaks into Jules’ mother’s house to delete an email Jules had sent her mother by mistake. This scene is based on an experience Meyers had when she sent her own mother an errant email. When it’s revealed just who taught Meyers how to hack into her mother’s account, well, I lost it.

When I was a little kid, Private Benjamin was one of my favorite movies. A big reason is it was rated R and I felt like I was getting away with something.

Yeah, yeah, because they smoke pot. And there’s a scene at the beginning with Albert Brooks that got us the R.

Absolutely not. It’s Complicated got an R because they smoke weed. I called the ratings board and I said, “Seriously? In 2009, you get an R-rating because two functioning adults smoke their first joint in 30 years, which is part of the dialogue, neither one of them had done it in 30 years? You’re going to give me an R for this?” And the woman at the ratings board said, “If there were a line or a scene that followed that said they wished they hadn’t done that, you’d get a PG-13.”

That’s the way it works?

There was no remorse.

So you can just call the ratings board? It’s that easy?

I thought it was a more formal process.

Well, we did have a more formal process of going in front of them to plead our case. But either we called before that or when we got turned down again, I can’t remember when I made the call. I just wanted it explained to me. What’s the problem?

I can’t believe it came down to remorse.

We trust these two people! And that’s what she said to me, that if you had a line or a scene that said they shouldn’t have done that.

I’m fascinated by this.

Well, now you have your whole piece. And lesson learned, by the way. So, for other writers…

Very much. I don’t want to limit the people that feel they can see the movie. And I think a lot of people take the ratings very seriously and they say, “That wouldn’t be for us.”

And there are less rated R movies now. It used to be more common.

I think The Hangover was a big turn that proved an R-rated comedy could still perform well, and a few others have followed its lead.

I’m sure Trainwreck was an R.

But should Trainwreck and It’s Complicated have the same rating?

In lesser hands, The Intern could have devolved into just “Ben doesn’t get new technology” and “Jules is mean,” which isn’t the case.

Isn’t this true of every movie? In lesser hands, it would have been a different movie?

But it’s true of every movie, though.

But I like that everyone is nice in this movie.

I feel that’s a criticism disguised as a compliment.

It’s not a criticism at all. It would have been easier to make Jules into something like Meryl Streep in The Devil Wears Prada.

Well, I’m the last person to make the female boss the villain. I’m never going to do that. Everyone else does it.

Everyone else does do that. So, my brain is trying to prepare me that something like that might happen, even though I knew you wouldn’t.

Right, but it’s a character that I find really offensive. And I see it, not so much right now, but for the last 10 years, movie after movie – well, often the male bosses are buffoons or evil, too – but the women bosses, they tend to dress them like Cruella de Vil. Very pointed clothes and pointy hair and they want to have sex with you. They’re horrible. So, you know what I mean? They are after you in every kind of way. And what am I going to do that for? It’s not real.

So, I want to reiterate, when I say “everyone is nice,” I mean that as a huge compliment. It’s what you just said, we don’t see that a lot.

But not in movies.

Yeah, but I feel my job is to try to be as authentic as I can.

Should I use that word instead? That everyone seems authentic?

Thank you. You know what? When you’re in my job, you’re sort of used to people in your job sort of coming at me. So, I’m perceiving a compliment as a negative thing.

Like I said earlier, I’ve admired your movies since I was 6 years old.

I’m trying to make them sound like real people.

There’s a scene in The Intern that feels like it’s out of a heist movie, when a group breaks into a house to delete an email off of a computer. I was not expecting that.

Well, something like that almost happened to me. I didn’t have to do that because I got into someone’s email – I figured out their password and deleted it.

It was my mom.

You committed a crime.

And now everyone is going to know.

Yeah, well that’s fine. It was my mom. I didn’t write anything mean. I was actually worried about her a little bit, and I had written to my sister about her that I was worried about being too fragile.

And you sent that to your mom instead.

I sent it to my mom.

Well, I called her and said, “I wrote an email to you and I think it has a virus and I want to delete it.”

No, I was trying to protect her.

I know, but that’s a good excuse.

Well, someone gave me that idea.

It may have been Alec Baldwin. It happened on the set of It’s Complicated and he was helping me figure out what to do. And it may have been him telling me, “Say you have a virus.”

So, if someone gets a phone call from Alec Baldwin and he’s telling that person he sent a virus, he’s probably lying.

[Laughs] Oh yeah, that’s true. It may have been him; he was helping me figure out what to do… that was a super fun scene to shoot. We’re all in the same zone; me and Bob [De Niro] and the boys. And it was Brooklyn last summer and, honest to God, it was 90 percent humidity. We were out of our minds, we were all so hot. He was in this wool suit and he never broke a sweat.

Because he’s a pro.

Exactly. Jason Orley, one of the boys, after they run to the car and go back for the next take, everyone is sitting in the director’s chairs back there. And the boys had makeup people around them and little portable fans, and Bob is just reading the paper. And Jason said to him, “Why are you not sweating? You are in a wool suit. I’m in a t-shirt.” Bob says, “Years of practice.”

Do you think something like Private Benjamin could get made today?

They are trying to remake it with Rebel Wilson.

That would be very different, though.

I assure you, if they are remaking it, it is not going to be the same story with Rebel Wilson. I hope they don’t do it.

Father of the Bride.

And I remade The Parent Trap. But with great respect.

I almost said there’s such a long gap between the two Father of the Bride movies that it’s different, but it’s almost as long a gap now for Private Benjamin.

The original Father of the Bride was 1950.

Oh my God, that makes me feel… Because when we did Father of the Bride, in my mind, it felt like 100 years. You’re kind of, probably right. Wow.

But culturally, we are much closer to your Private Benjamin than the Father of the Bride movies were, despite the amount of years being similar.

And it’s also your world-ish.

If I walked into a toy store right now, kids are playing with the same toys I played with in 1984: Star Wars, Transformers, and superhero stuff. Back to the Future is still as popular today as it was back then. The differences between 1991 and 1950 are much greater.

And people still talk about Private Benjamin and a lot of your other movies, so they don’t seem like “old movies.”

That’s an interesting point. I mean, I’ll never see it. Why would I?

If I were you, I’d be curious.

Then you can tell me. But it’s been a year or so and I haven’t heard anything, so I’m not sure it’s happening.

I can live my life with just your version.

The Private Benjamin people might be thinking the same thing.

So, I can understand what they are going through.

Is it weird to be on the other side of it?

Does it make you reassess your remakes?

Well, no. Because I know the intent with both Father of the Bride and The Parent Trap were to honor those movies. What we did with Father of the Bride was make it more of a comedy than the original. But, it was also a Steve Martin project. He came to us with it and he wanted us to do it. But it was an honor to have Steve want to make a movie with us, so we wanted to make it as funny as possible. And with The Parent Trap, it’s very close to the original in ways. It is. We did not reinvent the movie; we just modernized it.

But I’m on your side with Private Benjamin.

That one I don’t get. And, also, women in the military, it’s not such a funny thing now.

There’s nothing funny about that.

It’s not funny at all.