Did You Know That Robert Downey, Jr. Quietly Released An Adult Contemporary Album In 2004? 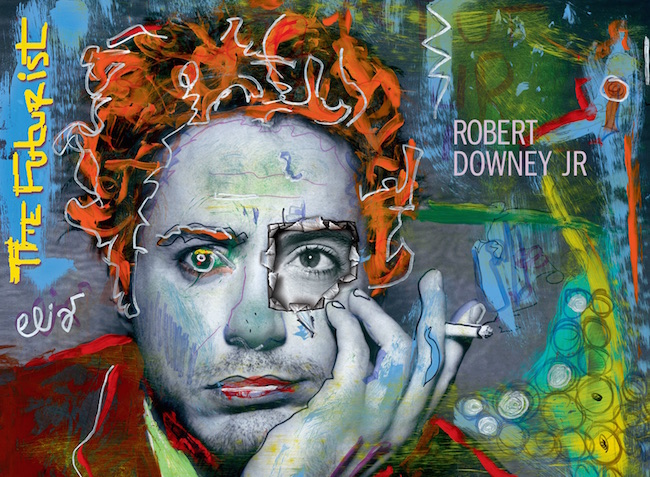 Sometimes, that little nagging voice inside your head wins. Sometimes, the desire to know what an album recorded by Robert Downey, Jr. sounds like is too overwhelming to ignore. It was a few days ago, when I had to look up a movie in Downey’s filmography, that I stumbled across the fact that in 2004, Downey had recorded an album of pop/adult contemporary tracks called The Futurist. Asking around, most people also didn’t seem aware that this existed. (Though, a few people faintly remember something about it.)

It’s always weird when a human being we know primarily as an actor decides to record music. The epitome of fame is being a “movie star,” so it always comes off a kind of arrogant when a famous actor decides, “Oh yeah, music, I bet I’m naturally talented at that, too.” It just seems kind of greedy. (For some reason, it never bothers me when a recording artist tries to act. I usually find myself rooting for him or her.) But, in Downey’s case, this wasn’t the “one of the most famous actors in the world” Downey we know in 2015.

In a 2004 New York Times Q&A about the album, Downey, Jr. said the following about the state of his career at that time…

Q. Your acting career seems to be rebounding. Are you getting as much work as you’d like?

Q. Don’t you need the money?

A. Oh, I need the money, but it’s not like the offers I’m getting are breathtaking epics.

No, this was a Downey who had not too long ago just lost his job on Ally McBeal; had just starred in The Singing Detective, which grossed under $350,000; was going through a divorce, and had just come off of one of the darkest periods that any public figure has experienced and survived. (One that Downey, kind of understandably, doesn’t really like talking about too much today.)

But even so, it’s hard to separate the Downey we know today from the one singing his way through ten tracks on The Futurist. The Downey we know today is very famous, very sarcastic, and very guarded. No matter how many interviews he does for Age of Ultron, he doesn’t really say a whole lot. This is by design. And “earnestness” is not an emotion that Downey really shares openly. And, boy, The Futurist is pretty much nothing but earnestness. I can’t help but think Downey looks back at The Futurist the same way we might look back at a sent tweet when we were feeling unusually vulnerable. Make no mistake, The Futurist isn’t good, but it is pretty fascinating.

“I think I’m more sensitive and introspective and filled with wonder at the universe because of what I’ve gone through than I care to admit,” Downey, Jr. said in the  aforementioned 2004 Times Q&A. “So, every one of the songs is influenced by my experience, but I hope it’s a little obscured.”

Not realizing The Futurist is available on both Spotify and YouTube, I paid for the album on iTunes. So, if Downey somehow gets a notification whenever his album has made money, well, that latest one was from me.

It’s a weird thing when someone we are this familiar with starts singing. When Downey starts singing on the opening track, “Man Like Me,” I instinctively started laughing because I didn’t know how else to react. I mean, Downey really is singing. Like, he’s really giving it is all. At first, I thought it was odd that a man that had experienced so much pain would try to express that with an adult contemporary album, but thinking more about it, I’m not really sure what genre would really have been better. The Futurist was released just five months after The Killers’ Hot Fuss. It would probably be much weirder if The Futurist included anything that sounded like “Mr. Brightside.”

The best way I can describe Downey’s singing voice is that it sounds like a cross between Peter Gabriel and Taylor Hicks. That’s not an attempt at humor, that’s legitimately what came to mind as I listened to every single track on The Futurist. In “Man Like Me,” Downey almost has a twang that seems to come and go as the song progresses with lyrics like, “She says you’re throwing life away to move with a man like me.”

A lot of the songs have lyrics like that, usually from the standpoint of a damaged man coping with the people around him. In “Broken,” Downey croons, “You fell in love with a broken heart,” before flailing into more nonsensical lyrics like, “You’ll feel my medicine side effect/think I’ll grab some magazines.” Then, finally, singing, “God grant me the strength to accept the things I can change, change them.” In “Kimberly Glide,” this trope continues with lyrics like, “You mistook me for a man who understands.”

There’s not a lot uplifting about The Futurist, despite its adult contemporary packaging. In “Little Clownz,” Downey laments, “All of my friends, all of my so-called brothers/We are dying, we are tired.” On “Details,” Downey sings, “I’ve come to believe if a man does his deeds while he’s missing wine/He’s already died, he’s already died a hundred times.”

In “Hannah,” probably the most on-the-nose track on the album (on an album filled with on the nose lyrics), Downey sings, “And now he’s stumblin’ in his buckskin/And we’re, we’re rootin’ for a suicide. He’s a boy-king, but he’s a bastard with a problem/She’s a stomping beast, and a dark demanding child.” Later, accompanied by background vocals, he adds, “No small wonder that this boy’s little war toys/Got him bombed on the carpet/ Brown-out in the townhouse.”

Amidst these tracks, Downey also covers the song “Your Move” by Yes, with Yes lead singer Jon Anderson singing backup vocals. At the end of the track, the song drifts into John Lennon’s “Give Peace a Chance.”

For a public figure like Downey, who is so known, but recently, calculatedly distant, listening to The Futurist is a fascinating look at someone who clearly wasn’t in a great place at the time it was recorded. It’s hard to recommend The Futurist to other people because the musical aspect of it just isn’t that good (which is probably the main reason that you most likely have never heard of The Futurist), but if you want to get a sense of where Downey is coming from in a way that no interview could possibly accomplish, The Futurist is, if nothing else, an interesting time capsule of the life of one of the most famous people on Earth.