Why You Should Be Reading Marvel’s ‘Secret Wars,’ Which Is The New ’Crisis On Infinite Earths’ 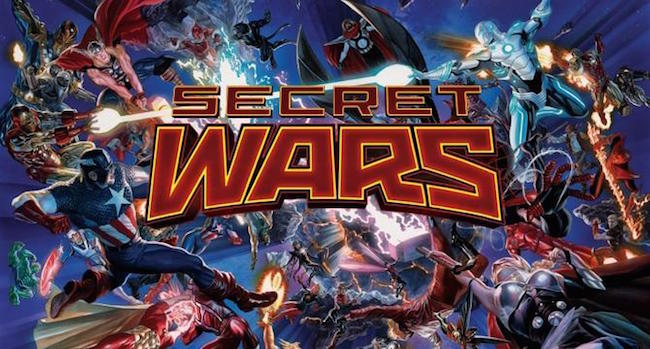 Crisis on Infinite Earths debuted in 1985 and, at the time, my 10-year-old self had never experienced anything quite like it. It was terribly important in a way that I had not experienced before – at least, it sure seemed important to all the characters that were experiencing the Crisis on Infinite Earths as they were slowly devoured by anti-matter. Through its 12 issues, it managed to kill off my favorite superhero at the time, The Flash, and completely reinvent the DC universe. Since then, both the DC and Marvel universes have been reinvented in some capacity numerous times. None of them seemed quite as important… at least until now with Marvel’s new Secret Wars series.

These Crisis-type events are basically internal housekeeping, a way to clean up messy continuity errors that have built up over time. It’s an easy way to wipe the slate clean by basically killing off unwanted characters, erasing character memories, and starting over. Batman made his first appearance in 1939, so how could Bruce Wayne still be a relatively young man in 1985? DC solved its passage of time problem by inventing multiple Earths. So, the 1985 Batman lived on Earth-2, while his 1939 counterpart lived on Earth-1. There were a lot of Earths, and DC wanted to bring them together into one, hence Crisis was created.

The year before Crisis, Marvel had success with its first Secret Wars series – a series that presented most of the major players from the Marvel Universe fighting on an alien planet, which most notably produced a successful toy line and Spider-Man’s new black costume (which later became Venom). But, as opposed to Secret Wars, which just felt like good fun, Crisis on Infinite Earths was changing everything I knew about the DC universe.

The actual plot of Crisis (explaining in the simplest way possible), involves The Monitor – a being who watches over the DC multiverse – being murdered, which leads to the Anti-Monitor trying to destroy everything in the form of a wall of white antimatter. (In 1985, had you have asked me what my greatest fears were, “eaten by a wall of white antimatter” would have ranked third or fourth.) The heroes of the multiple universes then band together to fight the Anti-Monitor.

(From a fictional character point of view, it would have been funny if the Anti-Monitor had succeeded; leaving the DC Comics staff with nothing to write about, except for the now probably mundane daily life of the Anti-Monitor. “This month, The Ant-Monitor eats a hamburger.”)

At the time, I remember trying to explain to my parents why this series was so “important,” which was usually met with indifferent shrugs.

“But they killed The Flash!” I cried.

“I thought he was done, anyway?” my mom answered.

“His comic book ended, but he was still alive, living in the future with his wife, Iris,” I said, which was met with another shrug. “This is important!”

Crisis on Infinite Earths felt less important when the Legends series came along just a year later. After that, it was Millennium. Eventually, we’d get to Infinite Crisis, then Final Crisis. I did a poor job of keeping up with all of the event crossover titles that would Change Everything after the original event crossover that would Change Everything. 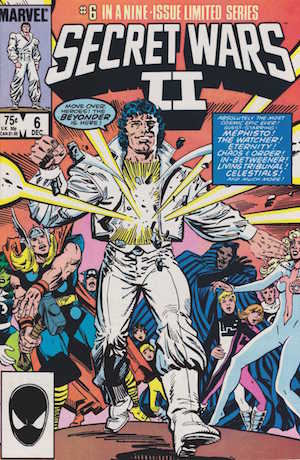 At one point, Beyonder buff Michael Landon develops a beer belly and uses his Beyonder powers to make it go away. None of this made me excited to read a new Secret Wars story.) But, I’ve been reading the new Marvel Star Wars titles and, while picking them up at a local Upper East Side comic book store (support your local comic book stores!), I decided, what the heck, I’ll read Secret Wars.

The new Secret Wars starts out incredibly confusing and kind of dull, but it’s building. By the third issue, I found myself making mental comparisons to Crisis on Infinite Earth. The Marvel Universe is gone, and all that remains is Battleworld, which is basically a few remnants of what used to be the Marvel Universe that were saved by Doctor Doom, who is now God. (This is slowly explained, which is why this series starts out so confusing — but we are all in the confusion together!) Many characters have been re-positioned in this new world and don’t seem to remember much about their past life, like Sue Storm, who is now at the side of Doom. Some characters – like Spider-Man and Ultimate Spider-Man – have their past memories intact and seem to be as confused as I am while reading. Also: Major characters die arbitrarily and often. Everything seems at stake on every page. It’s very exciting. (Also, it probably becomes more and more annoying for Doctor Doom fans because here he is at peak Doom, while currently at movie theaters exists his worst on-screen adaptation yet.)

The funny thing is, I don’t really consider myself a huge comic book reader anymore. I’m certainly not reading all of the Secret Wars tie-in titles, because there are just too many and I wouldn’t even know where to begin. But, while reading, I’m having that “this seems important” feeling again. But more now because comic books are much more a part of our culture than they were in 1985. When I was reading Crisis, it felt like some fringe thing. As I read Secret Wars, it feels like something I kind of almost have to know to properly keep up with even what’s happening in the Marvel Cinematic Universe.

In other words: This is your perfect jumping on point.

The new Secret Wars will Change Everything until whatever comes next that Changes Everything, but, right now, Marvel has actually captured that Crisis feeling that DC created way back in 1985. It’s not quite the same – it can’t be the same; being “the first thing” will always make Crisis special – but it sure is close.