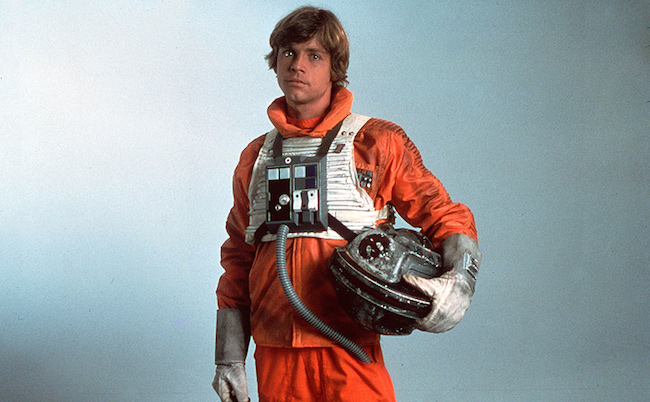 Also, more surprisingly, the title of the first Star Wars spin-off movie (which will be released in December of 2016, directed by Godzilla‘s Gareth Edwards) was announced, Star Wars: Rogue One. Now, if you just casually follow Star Wars or, maybe, don’t follow Star Wars at all and have no idea what that means and don’t want to be left out of party conversations because there’s a lot of Star Wars coming our way, here’s a brief history. (Warning: It’s a little nerdy.)

In the original Star Wars (or A New Hope, if we must) Luke Skywalker participates in the Battle of Yavin – Yavin is that big orange gas planet we see near the end of the movie. The Rebel base in Star Wars is on a moon that orbits Yavin and this is where the Rebels launch their attack on the Death Star. During this attack, the X-Wing fighter pilots were given the code name Red Squadron (in the Star Wars novelization, they were the Blue Squadron) and Luke’s call sign was Red Five.

Now, in the years between the original Star Wars and The Empire Strikes Back, Red Squadron is renamed Rogue Squadron, and Luke Skywalker is now Rogue Leader, or Rogue One, during the Battle of Hoth. The Star Wars expanded universe books to address this change, but, since Disney purchased Star Wars and Lucasfilm, all of the prior expanded universe material were deemed non-canon, so none of that matters anymore anyway.

In Return of the Jedi, during the assault on the second Death Star during the Battle of Endor (the moon where the Ewoks live), Wedge Antilles (who was Rogue Three in Empire) is now Rogue Leader, or, again, Rogue One. It’s never explained how Luke Skywalker lost his designation as Rogue Leader, but it’s most likely that Luke’s role in this particular battle did not have him flying an X-Wing, so Antilles was promoted.

So that brings up to the new Star Wars spin-off, Rogue One. Is it going to be a standalone movie about Luke Skywalker or Wedge Antilles? This seems very unlikely considering that Felicity Jones has signed on to star in the film. Now, there are a lot of rumors that the plot of the first spin-off film centers around the theft of the first Death Star’s plans – which places the action in-between Revenge of the Sith and the first Star Wars, which leads to the assault and destruction of the Death Star in the first Star Wars movie… which is an interesting premise and sounds like a Star Wars-themed heist movie. Could Rogue One still be that story? It sounds unlikely, but it still could. (Basically, insert the shrug emoticon here.)

Though! Out right now as we speak is the new Princess Leia Marvel comic book, which takes place between the first Star Wars and The Empire Strikes Back. Disney has been adamant that the new comic books are canon, so we are supposed to take what happens as gospel. In the first issue – which I enjoyed immensely – Leia teams up with a female Alderaanian (the same as Leia) X-Wing pilot named Evaan, and they set out on a mission to find and protect the last remaining people from Alderaan – the planet that was destroyed by the Death Star during the events of the first Star Wars. Could Evaan be the character that Felicity Jones will be playing? Probably not, but this is a new character who is (A) now canon and (B) an X-Wing pilot. And, as we covered before, the Rogue Squadron was formed between Star Wars and The Empire Strikes Back, which, again, is when the comic is set. 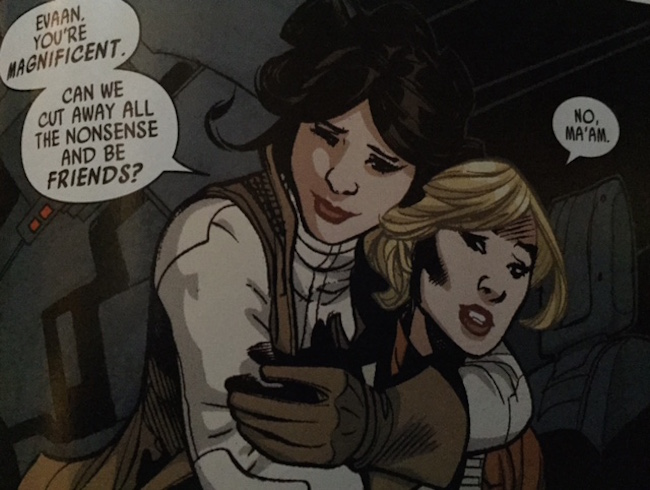 Anyway, regardless, this is a great development for Star Wars fans today because we now officially know that the director of Looper will be directing Episode VIII (OK, we knew that before, but, whatever) and we have the announcement of the first ever theatrical live action spin-off — and the first woman-led — Star Wars movie.