‘The Hunger Games: Mockingjay – Part 2’ Is A Fitting Conclusion To An Important Series 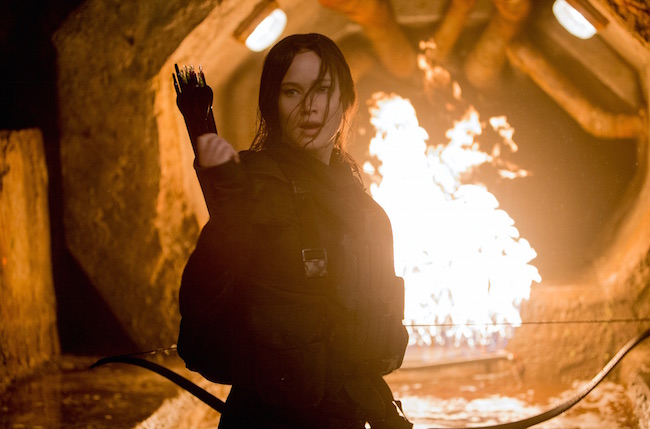 With Furious 7 earlier this year, it was a similar feeling: Even though an actor we liked was no longer with us, we’d still get a chance to see him one last time — to kind of say goodbye. In the case of The Hunger Games: Mockingjay – Part 2, it’s the last time we’ll see Philip Seymour Hoffman, who’s now been gone for over a year and a half. And even though I thought I had myself mentally prepared, it’s pretty shocking how quickly we see Hoffman’s Plutarch. But there he is, standing over Katniss Everdeen (Jennifer Lawrence), who’s tending to her injured neck after she was attacked by Peeta Mellark (Josh Hutcherson) in the closing moments of the first part of Mockingjay. Looking at Hoffman on screen, I couldn’t help but whisper to myself, “Man, I miss that guy.”

Sorry to start off on such a down note on one of the most highly anticipated movies of the year. Though, it’s a lot different than when Mockingjay Part 1 was released a year ago and all of this was so much more raw. Here, it feels almost nice – that we get to see Hoffman one last time. And there’s little computer wizardry used to complete his scenes. Once, it’s pretty evident he was inserted into a brief scene, cropped from someplace else. And in another — in a scene that was without a doubt supposed to be Hoffman’s (and I confirmed this with the film’s director, Francis Lawrence, in an interview that will publish closer to the film’s release) – Woody Harrelson’s Haymitch shows up to deliver a message from Plutarch. It’s all handled about as well as something like this can be handled. Again, I miss that guy.

If you haven’t seen The Hunger Games: Mockingjay – Part 1, there’s nothing here to catch you up on the events of the first half of this movie, or, for that matter, the first two movies. Part 2 takes the attitude of, “By now you either know what’s going on here, or you came to this movie with a friend and you don’t care anyway, so we’re moving on.” I mean, Part 2 picks up exactly where Part 1 left off, with absolutely no fanfare other than a “Lionsgate” logo.

There was a lot of criticism that the first Mockingjay movie was all setup and no payoff. There’s some truth to this. But I almost view these movies as episodic television at this point. Francis Lawrence has even said that the cliffhangers in the films are inspired by the cliffhangers from Breaking Bad. When a movie has a Part 1 tagged onto it, I kind of know that I’m not going to get a complete story out of what I’m going to see. Some people have a huge problem with this. As an extreme example: Joss Whedon doesn’t like The Empire Strikes Back because it’s not a complete story. I suppose I understand this line of thinking, I just don’t feel that way … especially when I’m warned in advance. My point: I liked Mockingjay – Part 1, mostly because it wasn’t yet another Hunger Games tournament.

In The Hunger Games: Mockingjay – Part 2, viewers do get their payoff. If you’ve read the book series, you know Mockingjay is the most polarizing of the three books. Its story doesn’t quite land the way most probably hope it will. And the love triangle between Katniss, Peeta, and Gale (Liam Hemsworth) ends abruptly and kind of vaguely. (Without getting into too much spoilery detail, you probably won’t get the closure on one of these three characters that you had most likely hoped for.) Anyway, Francis Lawrence is working with (at least compared to his first movie as director, Catching Fire), let’s say, shakier source material.

Having said that: in comparison to Part 1, Part 2 feels like almost non-stop action. Katniss, against the orders of the rebellion’s leader, President Coin (Julianne Moore), joins her fellow rebellion fighters on the streets of the Capitol. The rebellion has their mission to take back Panem; Katniss has her own personal mission, to kill President Snow (Donald Sutherland). What follows is well over two hours of pretty much just all that: action, driven by a subplot that not everything and everyone is quite as Katniss thought it and they were.

Halfway though The Hunger Games: Mockingjay – Part 2, there’s an elaborate underground sequence that almost feels like something out of a zombie movie, certainly not a Hunger Games movie — maybe something more out of Lawrence’s prior film, I am Legend. The sequence is a bit terrifying at times. (To be fair, I scare easily.) But I liked this sequence quite a bit, just because it is so different.

So, here we are, at the end of The Hunger Games movies – hey, we made it! –well, at least until the rumored spinoff movies. (This franchise will never truly be over.) I’ve, kind of unexpectedly, enjoyed all of them. I still think Catching Fire is the best, but I’d put The Hunger Games: Mockingjay – Part 2 right behind it. Katniss Everdeen is a good character and I felt myself caring about what happened to her. With blockbuster movies, that’s one of the few things that I ask: I want to care what happens to the main character. And I did. And I’m, for the most part, satisfied. (Except for the one point I alluded to earlier that I can’t really go into right now — but, again, this comes from the source material. And if you’ve read the books, you probably have a good idea what I’m talking about.)

The Hunger Games movies — just on their own, separate from the books — have been a true phenomenon. It’s almost weird that the four movies came out so quickly to each other – this sudden burst of popular culture that’s now (sort of) over. I honestly do think these movies are important. I do think it’s terrific that young women, and young men, have a strong “action hero-type” female character to call their own. And, yes, this movie lets us say goodbye to an actor we loved — and an actor that millions of kids will now never forget and, hopefully, inspire them to watch his other work someday.

I think all that is much more important than any minor plot quibbles that I might have with the second half of a two-part movie of a four-part series. These movies represent something good. (Not the plot of killing kids in an arena for sport, but I will just assume at this point you understand my point.) Maybe, for some young viewers who love Katniss — and, for that matter, Jennifer Lawrence herself, who has been very outspoken on women’s rights — a character (or actor) like that can put the odds a little more in her favor.