Prepare yourself for one of the strangest stories you’ll hear this week. Diplo has apparently been using a photo of another child and claiming it’s an old photo of himself.

According to Gawker writer Taylor Berman, the producer has posted a photo to Instagram several times as if it was a photo of him, but it’s actually a photo of Berman’s friend Kate McNeely. Check out the Instagram post above and a Facebook post from McNeely’s mother claiming that the photos aren’t of the producer. 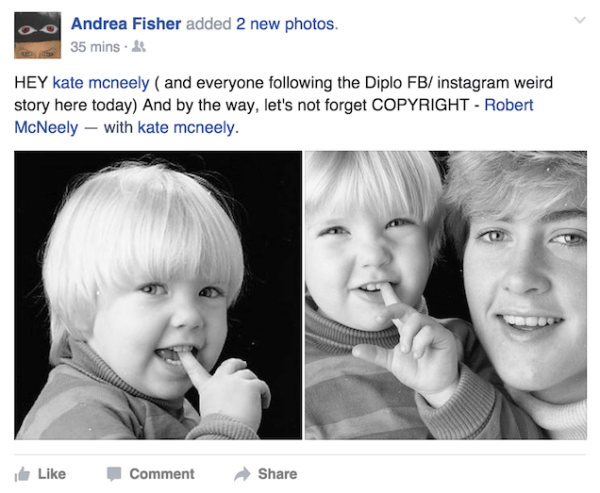 McNeely posted the photo to Instagram, and Diplo responded.

Maybe my whole life has been a lie? #thatsnotdiplo

“Maybe we were separated at birth and sent to different foster homes? Also, our mom is actually Princess Diana?”

Diplo said that he thinks someone gave the photo to him years ago, and he’s been operating under the assumption that it was a photo of him. A version of the photo is hanging in his son’s room.

“He thinks you are his dad, by the way.”

Diplo thought that maybe their families had crossed paths when they were children, but that led nowhere. McNeely is from D.C., and Diplo’s family is from Mississippi and Florida.

Of course, it’s entirely possible that Diplo is trolling. He’s been known to deliberately mislead and confuse fans for the fun of it.

For comparison, here’s an actual photo of Diplo as a child: