We brought you video on Thursday of Scott Weiland butchering the classic Stone Temple Pilots song “Vasoline” with his current backing band, The Wildabouts. Instead of being a blast from the past, the performance was a harsh reminder of how far Weiland has fallen. It’s been a tumultuous career for one of the most beloved rock vocalists of his era. Here’s a timeline of some of the lowlights in Weiland’s career, and life, to this point:

The exact date when Weiland’s excessive use of alcohol and drugs began is not known, but he’s said in interviews that he began drinking and using cocaine while performing in bands as a teenager. What we do know is that Stone Temple Pilots first rose to prominence with their first album, 1992’s Core.

In 1995, Weiland — who has been diagnosed as bipolar — was arrested for purchasing crack, but only received probation. At this point, his drug use actually got worse, and he holed himself into a hotel where he and Courtney Love spent most of their time engaged in drug use.

“[Chateau Marmont is] where I ran into another one of my dealer’s best customers, Courtney Love,” Weiland wrote in his memoir, Not Dead & Not For Sale. “She was with Amanda de Cadenet, the photographer/socialite. As fate would have it, their room was next to mine. That night, Courtney and I got high as she and Amanda dressed for dinner at the home of Jack Nicholson. For a while, Ms. Love inserted herself into my ever-more-erratic story. We were never lovers, but were rather close at the start.”

He also said in a separate interview, “We shot drugs the whole time. Most of the time, she just walked around in panties. There was never anything that went on between us… Dope was the most important thing.”

Weiland’s drug use began to have an impact on Stone Temple Pilots, as they had to cancel a bunch of dates in 1996 and 1997 around the release of their third album, Tiny Music… Songs From the Vatican Gift Shop, including having to pull out of a tour with KISS. Peter Criss even voiced his concern for the well-being of Weiland, saying, “I just pray for the guy and hope that he gets himself better because they really are a great band.”

The band went on hiatus, with the other members forming Talk Show while Weiland recorded a solo album. They reunited in 1998 and released an album in 1999 called, aptly, No. 4. It was also around this time that Weiland wound up spending five months in prison for possession. In 2000, Weiland and his first wife, Janina Castaneda, divorced. In May of that same year, Weiland married Mary Forsberg, and he was charged with domestic violence in 2001. The following year, Stone Temple Pilots came to an end for the second time, amidst many reported backstage altercations between Weiland and his bandmates. 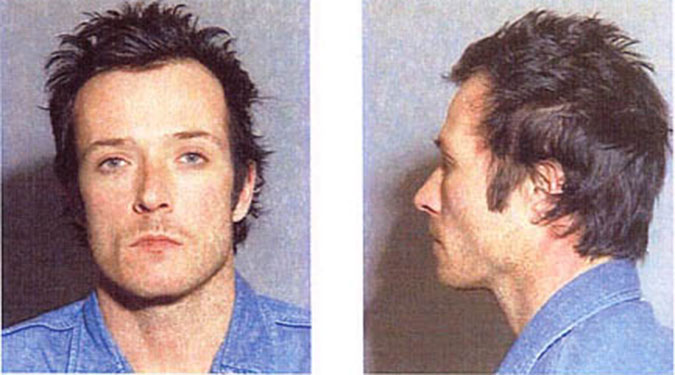 Soon after the dissolution of STP, Weiland joined up with a few guys from Guns N’ Roses to form Velvet Revolver. After years of dealing with a guy like Axl Rose, perhaps Weiland didn’t seem like much of a problem for the rest of Velvet Revolver, and the band stayed together for a few years, even winning a Grammy for the song “Slither.” In 2007, however, Weiland was arrested for DUI, and he checked into rehab in February 2008.

Another Stone Temple Pilots reunion was in the works, and Velvet Revolver replaced Weiland after a tumultuous tour. In an interview with MTV from around this time, Weiland indicated he had been off heroin since 2002, and he only dabbled in cocaine briefly in 2007. This new working relationship with his old band lasted until 2013, when the other members of Stone Temple Pilots released a statement on their website indicating they had “officially terminated” Weiland, replacing him with Chester Bennington from Linkin Park. The year before that, Weiland publicly talked about a Velvet Revolver reunion, indicating his interest in playing in both bands at the same time. Shortly after, Slash shot down Weiland’s comments.

If you don’t include the time a fake Scott Weiland got arrested for stealing razors and meth, this brings us up to speed on Weiland’s travails. He’s 47 now, but, as they say, it’s a hard 47. He’s a man without a country, watching Stone Temple Pilots continue on without him while he’s relegated to stumbling through the songs that made them famous together all alone.