Wrigley Field is in the midst of a large-scale renovation project that was not completed in time for the opening day game between the Cubs and Cardinals, and as a result, numerous bathrooms were out of service on Sunday and will continue to be for the foreseeable future.

For Cubs fans who were unfortunate enough to attend the game, things went from bad to worse when not only did they have to watch their team play piss-poor baseball (pun intended) in a 3-0 loss, but some resorted to peeing in cups due to 45-minute bathroom lines that stretched around the concourse.

The Cubs hope to alleviate the situation for future games by adding enough portable toilets to fill the back of a semi trailer. 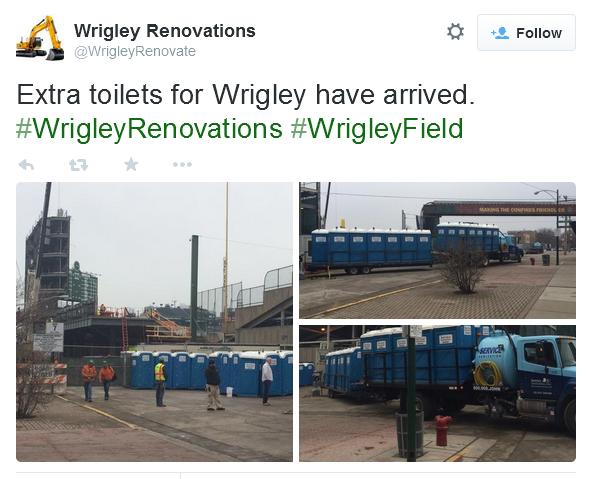 This is clearly not the start to the season the Cubs and their fans were hoping for. With higher goals expected of the team in 2015, hopefully this is just a small blip that’s quickly forgotten ahead of a fun year on Chicago’s north side. Although chances are it’s another metaphor for Cubs fandom that involves the awful stench of improperly disposed-of human waste.