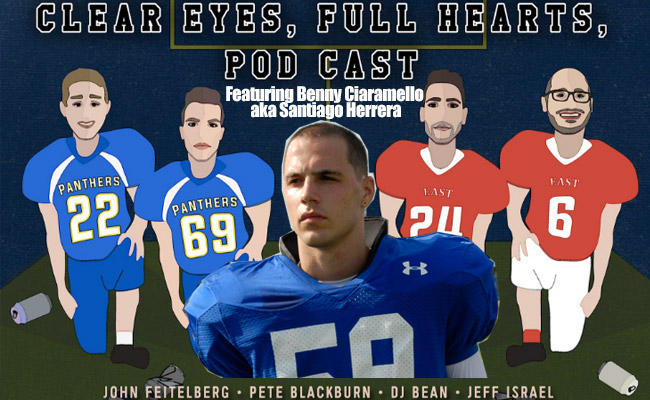 With the cast of Friday Night Lights getting ready to reunite at the ATX Television Festival in Austin this weekend, this is as good a time as any to take a look back at the series that chronicled Texas high school football like no other. We’re celebrating the show’s upcoming 10th anniversary by taking an in-depth look back at each season with a five-part podcast series this week.

Each episode will also feature an interview with a FNL cast member. Monday’s episode featured a breakdown of season one alongside a discussion with Zach Gilford, who played the role of Dillon Panthers quarterback Matt Saracen.

The roundtable continues Tuesday with a breakdown of season two, which is undoubtedly the strangest and most unpredictable of the show’s five seasons. A writers’ strike cut the season short by more than a handful of episodes and left the show in a sort of limbo.

We’re also joined by Benny Ciaramello, better known as Santiago Herrera — the troubled teen who moves in with Buddy Garrity and joins the Dillon Panthers after being released from juvie. Though a short-term stay on the show, Santiago was a strong central character during the second season. (Interview starts at 51:30.)

Ciaramello discusses his process and approach with Santiago, as well as how his own personal experiences and characteristics helped him transform into the character and immerse himself into the world of Friday Night Lights. We talk to him about his role on the show, which abruptly ended with an open storyline at the conclusion of season two, and he provides some insight into why his character was abandoned, as well as how he was able to come to grips with it as the show moved on.

Season three will be discussed on Wednesday with another special guest. You can subscribe to and review the podcast on iTunes or hit me up with feedback on Twitter (@PeteBlackburn), as well.