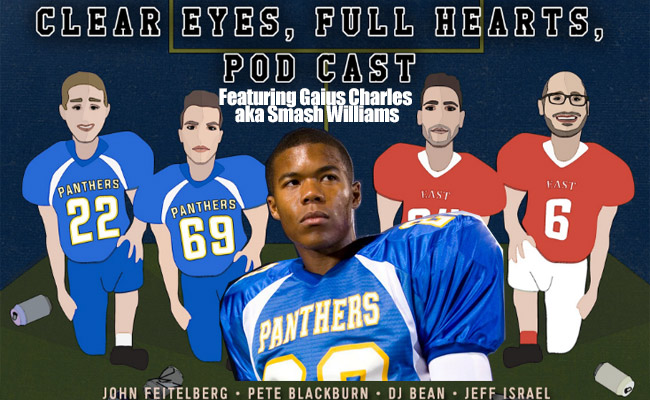 We’re continuing our obsessive appreciation of Friday Night Lights with a five-part podcast series this week. As the cast prepares for a 10th anniversary reunion at the ATX Television Festival in Austin this weekend, we’re celebrating by taking a deep dive into the show that followed the religion that is high school football in Texas.

The Clear Eyes, Full Hearts, Pod Cast series carries out an in-depth examination of FNL in a season-by-season format. Each episode features a roundtable discussion about key characters and plot points from that particular season, as well as an interview with a cast member from the show. From the beautiful, triumphant moments to the hilarious and infuriating imperfections, it’s all broken down by myself, DJ Bean (WEEI), John Feitelberg (Barstool Sports) and Jeff Israel (Funny Internet Man.)

Wednesday’s episode covers season three, which depicts the senior year of several core characters — including key Panthers players Matt Saracen and Tim Riggins — as they try to figure out their future. This is when we’re also introduced to the McCoy family, who essentially drive a divide between the tight Dillon community.

Season three guest is Gaius Charles, who played Dillon Panthers running back Smash Williams — one of the show’s most dynamic characters. A central force through the first three seasons of the show, Williams has arguably the most ups and downs of any character on Friday Night Lights. His transformation from anti-hero to one of the most beloved personalities of the series is fascinating, and we asked Charles about that journey. (Interview starts at 46:45.)

Season four will be discussed on Wednesday with another special guest. You can subscribe to and review the podcast on iTunes or hit me up with feedback on Twitter (@PeteBlackburn), as well.