[30 for 30 narrator voice] “What if I told you your entire childhood was a lie? That the greatest hockey play in Hollywood history was totally moronic and completely illegal? That no one can out-skate the truth? From ESPN Films: ‘The Flying V: Total Bullsh*t,’ presented by Levi’s.”

There’s a good chance that you already knew the infamous “Flying V” play from The Mighty Ducks trilogy was garbage. It wouldn’t fly in a real life hockey contest comprised of players with a shred of competency. After all, there’s a reason we don’t see NHL teams breaking out the duck-inspired formation when they desperately need a goal late in a game. It’s not only easy as hell to stop if you’ve got a single good defensive player, it’s also outrageously illegal for a variety of reasons.

Here, take a look at the first time we saw it in action.

There are some immediate notable takeaways here. First? Worst. Defense. Ever. Seriously though, even if you’re being attacked by a strange formation you’ve never seen before…why on earth would you line up like this on defense? 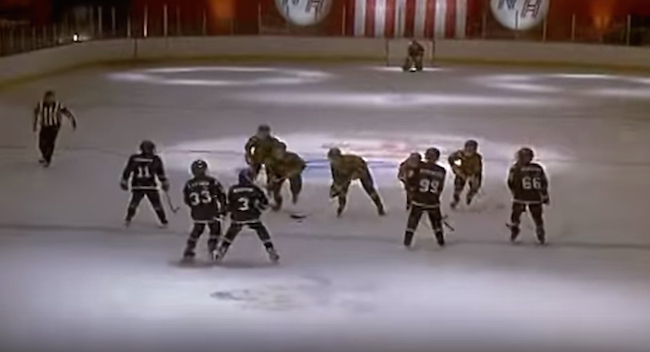 That coach needs to be fired and banned from teaching hockey ever again.

Second, how was interference not called on the Ducks? There were, like, at least three different guys who blatantly interfered on the play.

I know we’re talking about a Disney movie here, but teaching impressionable children they can just skate into the offensive zone and destroy the defensive players away from the puck is problematic. IT’S PROBLEMATIC, PEOPLE.

But make no mistake, the biggest travesty surrounding the Flying V comes in the sequel, D2: The Mighty Ducks.

First thing’s first, the chances of this play working in two consecutive films are hot garbage. It’s a bad play. If you want to tell me it’s got a chance working against a local youth team like the Hawks, fine…whatever. But having Team USA pull this crap in an international tournament against a team like Germany? Get the hell out of here.

But regardless of probability, the goal never should have counted anyway. We know this thanks to a series of three tweets from Twitter user @auquf, who exposes the play was clearly offside.

The Flying V was offside: Hall is not in possession of puck. Lit area in front is past the blue line. (1/3) pic.twitter.com/uYenWQM9sg

Hall is now entirely in the lit area, which is past the line (as is Germaine). He does not have possession yet (2/3) pic.twitter.com/z7Vbw4yQ2I

As Hall skates into the zone ahead of the puck without possession, the Flying V is offside. (3/3)

To be fair, it looks a lot closer to being onside in one of the shots than it does in another, so there was some sloppy editing done here. Either way, what we’re presented with leaves only one conclusion: The play was offside, the goal never should have counted, and Team USA may not have advanced as a result. Everything you know is a lie.

Considering this movie came out in 1994, you may be sarcastically thinking to yourself, “What a timely observation, Internet guy!” But consider this:

The implementation of a coach’s challenge in the NHL this season has led to a massive number of goals being erased off the board thanks to offside calls. Once a goal is scored, a coach with a challenge in his pocket can request that officials double-check to ensure the offensive players entered the zone legally.

And because there are plenty of replay angles and slo-mo, frame-by-frame viewing options, there’s a much better chance for officials to spot an early entry on the review. If referees find that a player was even a fraction offside, the goal comes off the board.

The only reason he coached the Ducks in the first place was because he was ordered to as community service after getting bopped with a DUI. He had sex with the mother of the captain of his team, then gave him preferential treatment as a result. And, again, kind of a racist.

Bombay was also a terrible coach. One of the first lessons he gave to his team of children was how to dive and flop.  He walked out on his team in the game against Germany and didn’t show up until the third period like the freakin’ hero he thinks he is.

When it boils down to it, basically the only thing Bombay was good for is The Flying V. That’s his legacy, his trademark. It was the only thing he had, and even that turned out to be a total crock.