The single-A affiliate of the Milwaukee Brewers apparently wants to give you a heart attack. The Wisconsin Timber Rattlers unveiled the horrifying things it put on its menu for the 2016 season, and the piece de resistance is this monstrosity known as the Big Mother Funnel Burger. It was on the team’s menu last year, and apparently it was such a success that it decided to bring it back for 2016.

But that’s not the only wild thing on the team’s menu. Here are a few other options that you’ll be able purchase and consume for the low price of 10,000 calories: 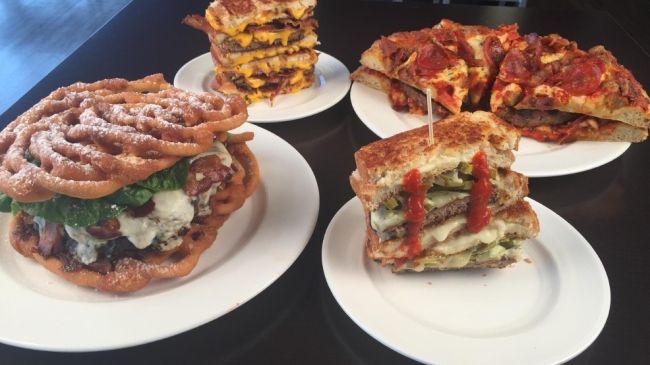 Going clockwise from the funnel cake burger, we next get to another thing that was on the menu last year, the Grilled Cheese Bacon Cheeseburger. This one isn’t too innovative, partly because it was on the menu last year, but mostly because using grilled cheese sandwiches as a bun for a burger is something that you can find in your average college town.

But then we get to the single craziest thing on the menu. It is a new item called a Meatlovers Pizza Burger, which is a burger that has pizza as its buns. According to Fox 11 News, the burger is made up of “four beef patties surrounded by a pepperoni and sausage DiGirono pizza.” I have no idea how no one thought of this before, but this is the definition of a thing that is a good and a bad idea at the same time.

Lastly, there is a spin on the tradition grilled cheese cheeseburger, the Grilled Cheese Venom Cheeseburger. It replaces regular bread with Texas Toast, uses pepper jack cheese, and for a big kick, it has jalapeños and sriracha on it.

All of these are nuts, and if you’ll excuse me, I’m gonna go buy tickets to their first home game now.