In July, while at Comic-Con, The Walking Dead showrunner Scott Gimple noted that he was working on an episode about Morgan’s backstory that would allow us to fill in the blanks on the character in between the third season and the present day. That episode, “Here’s Not Here,” arrived this week, and one wonders how much of Morgan’s backstory had been planned from the beginning, or if Scott Gimple had to work diligently to pick up a few of the Morgan crumbs he’s been leaving along the way over the past four seasons and work them into the backstory.

Much of the fun in “Here’s Not Here,” in fact, is in how Gimple figured out how to call back to some of the earlier moments we had with Morgan popping up in the occasional cold open or in the coda of an episode in seasons four and five.

We’ll dig deeper into the episode later, but quickly, here are seven callbacks to earlier moments in the series in this week’s episode.

1. Clear — We finally got a better understanding of what Morgan meant by “Clear,” in the third season episode of the same name, when he was rambling to Rick about it. Basically, to Morgan, “Clear” means to get everything clear of him. He believed that by killing everything around him — walkers and humans alike — he could be clear of the haunting thoughts of his zombified wife killing his son, Dwayne. “Everything that gets in my way, I ‘clear.’ That’s why I’m still here.”

2. The Letter “A” — The letter “A” pops up frequently on the show. It was on the railroad car in Terminus, Gareth marked Father Gabriel’s church with the letter “A,” and it was on the stamp in Alexandria that Sam applied to the hands of all its citizens. It showed up again in this episode: Morgan was scrawling the letter “A” into trees with the blood of walkers.

Aside from the fact that it’s the first letter in “Alexandria,” we still don’t have a clear understanding of what it means.

3. The Cheesemaker — Morgan told Father Gabriel that he learned to do what he does from a “cheesemaker” in “JSS,” and now we obviously know now that the cheesemaker is Eastman, who was a terrible cheesemaker, but a great forensic psychiatrist. Eastman taught Morgan Aikido and the art of peace and instilled in him a code that asks of him not to kill people.

4. The Gas Mask — The gas mask that we see Morgan wearing in the season five premiere is the same one he’s wearing when he leaves his home after it burned. 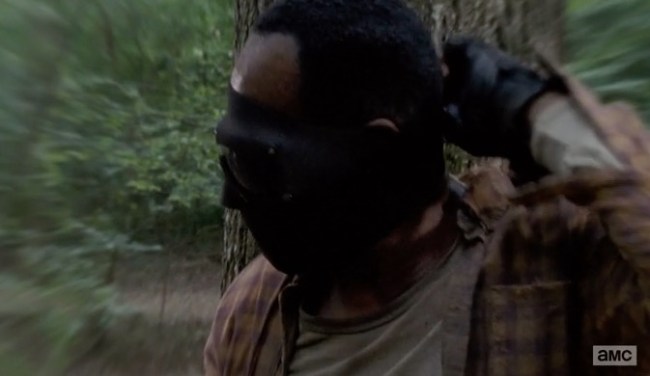 5. The Goo Goo Cluster, Bullet, and Rabbit’s Foot — In the coda of the fifth season mid-season finale, Morgan enters Father Gabriel’s church and prays, but before he does, he sets down a Goo Goo Cluster, a bullet, and a rabbit’s foot. We now know the significance of those items.

The Goo Goo Cluster was Eastman’s (a favorite food of his), the rabbit’s foot was given to Eastman by his daughter and then passed along to Morgan, and the bullet was given to Morgan by a stranger in the woods after he saved her and her companion from walkers.

The rabbit’s foot, however, was of a different color.

6. The Preciousness of Life — The reason that Morgan doesn’t kill is because Eastman revealed to him that he was never able to find peace until he decided never to kill anyone else again. Morgan honored Eastman — who saved his life — by also vowing never to kill again.

7. You’ll Hold a Baby Again — After Morgan told Eastman that he lost his wife and son, Eastman told him that he’d “hold a baby again” in his life. That would explain why Morgan’s face lit with acknowledgement when Rick offered to let him hold Judith in the season premiere.