A Breakdown Of The Completely Insane Ending Of The Series Premiere Of ‘CSI: Cyber’

Last night marked the season premiere of CBS’s latest CSI spin-off, CSI: Cyber. This is notable because, on paper, CSI: Cyber appeared to be the greatest show in the history of television. It stars Patricia Arquette as a cyberpsychologist named Avery Ryan whose team is “at the forefront of solving illegal activities that start in the mind, live online, and play out in the real world,” and it co-stars James Van Der Beek as an “action junkie” weapons savant named Elijah Mundo (ELIJAH MUNDO), and everything that was written about it leading up to last night made it sound completely ridiculous in the best possible way. I figured there was no way it could possibly live up to the image I had created in my mind. The bar was just too high.

Then I watched the premiere. It was amazing, and it featured one of the greatest and most hilarious endings to a television show I have ever seen. The video is embedded above. We need to talk about it. WE HAVE TO TALK ABOUT IT.

But before we get to that, we need to get you up to speed: Someone is stealing babies. And this isn’t just a smash ‘n grab crew, either. These are hackers. They are hacking baby monitors. At one point one of the agents says, I swear to God, “They were casing the baby remotely.” Casing the baby. Incredible. Point being: Enter Special Agent Avery Ryan and her cyber team, who jump headfirst into the case of the stolen babies.

There’s no way to do the next 30 minutes of the episode justice in one single run-on sentence, but here’s a shot: The team figures out that the hackers were kidnapping babies to hold an international online baby auction for parents who were frustrated by the legal adoption process, and they use a thumbprint from the diaper of one of the stolen babies to track down low-level baby thieves Vikki and Ricky, both of whom are killed by a sniper on a dirtbike immediately after Avery and Mundo arrive, and the former of whom used to smuggle drugs into the country inside her breast implants, which was revealed by a virtual autopsy that looked like this… 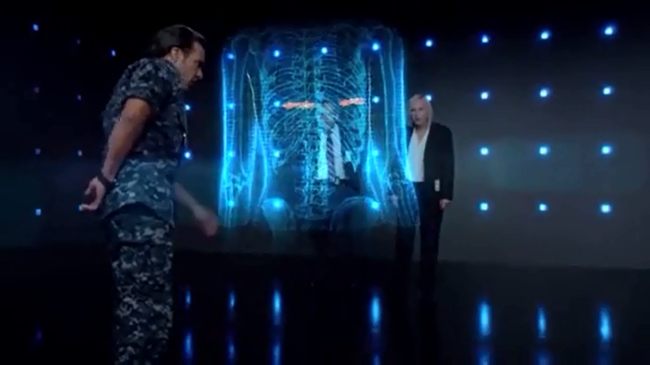 … and eventually — with the help of a reverse-hacked gaming system that was playing a fictional video game called “Assassinites” — led the team to a warehouse filled with baby-stealing hackers that they busted into moments after having Elijah Mundo heave what appeared to be a Nerf ball with a camera inside it through an open window to perform surveillance. Again, incredible.

This brings us to the video. Bow Wow — excuse me, Shad Moss, in character as young hacker Brody “Baby Face” Nelson, who is working with the FBI to avoid a five-year jail sentence, and who at one point delivers the weapons-grade burn “Hey chubby, keep my name out your mouth. I’m not your braces” — figures out that the head hacker’s tattoos of the death dates of his loved ones will unlock the 20-digit passcode for the computer system, which reveals the location of the baby they’re looking for. Avery and Mundo set out to retrieve the baby, which leads to a high-speed chase through the woods of New Jersey between them and a man who looks like if Matthew McConughey and Wynn Duffy from Justified had a baby, which leads to WHEEEEEEEEEEEEEEE…

… EEEEEEEEEE. Yup, that’s a four-door family sedan launching like 20 feet into the air and 60 feet into the middle of a pond as though it was screaming down a twisting dirt road at speeds approaching 300 mph. The whole thing is basically a scene from Dukes of Hazard, but replace the trunk filled with crates of illegal bootlegged moonshine with one (1) adorable stolen baby buckled into a car seat in the back. I mean, look at it. Look at it. I could watch that GIF for hours, and I probably would if not for the fact that we need to press on because there’s now a baby inside a car that is sinking to the bottom of a gross pond and Special Agent Elijah Mundo is ON IT.

This is 100x funnier if you pretend that is Dawson Leery from Dawson’s Creek sprinting into that pond to rescue a stolen baby, presumably after giving up his big Hollywood career for a job with the FBI. And changing his name to Elijah Mundo. And no one brings it up. Ever. Work with me here.

Anyway, he dives into the water and smashes the rear window open with his elbow and pulls the baby out, and it leads to maybe my favorite television GIF since the time Judith Light did giant lines of cocaine at a rodeo on TNT’s updated version of Dallas.

And speaking of people dying, THE BABY ISN’T BREATHING. WHAT ARE WE GONNA DO?

Ladies and gentlemen, I give you ACADEMY AWARD WINNER PATRICIA ARQUETTE performing mouth-to-mouth CPR on a baby that was just recovered from a sinking car by James Van Der Beek after it had been stolen by hackers who used hijacked baby monitors to spy on it and who outsourced the theft to a drug mule who hid narcotics inside her breast implants on

of a CSI spin-off titled CSI: Cyber. What a wonderful time to be alive.