The Latest ‘Game Of Thrones’ Theory Involves A Fart, And Video Evidence Seems To Support It 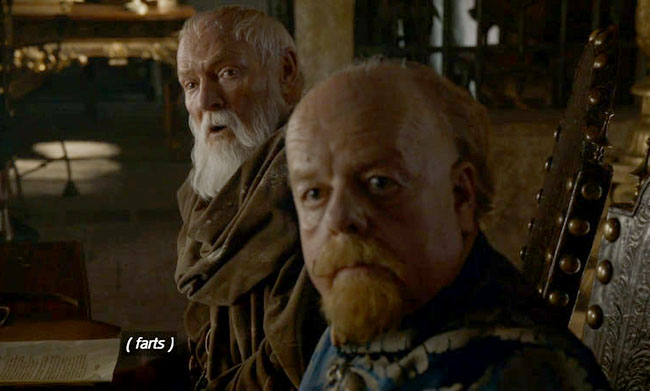 While the big moments from this week’s Game of Thrones included the writers once again pulling a Lucy and yanking the football out from under us just before we were to finally, finally learn the truth about the R+L = J theory, Jon Snow giving Olly and the other traitors the what’s for before quitting the Night’s Watch, and Dany getting sent to Khal widow prison, one other moment had the internet on fire. When Cersei and Jaime, accompanied by zombie Mountain, attempted to stage a coup in the middle of a council meeting — only to have the meeting disband in front of them — some viewers noticed an audible squeak when the camera panned to Grand Maester Pycelle and Mace Tyrell.

Was it a chair? A door squeak? Or did Game of Thrones really make a fart joke? Suffice to say, people definitely noticed.

Did someone just fart on Game of Thrones? That was a fart, wasn't it? #GameofThrones

Did they really use a fart track in Game of Thrones?

Did they just edit a fart noise into this episode of Game of Thrones? Was that really a choice that was made?

Did anyone else catch that fart in this GoT episode? What is happening to Game Of Thrones????

Took Game of Thrones 53 episodes to make a fart joke… and it was worth the wait.

Is it just me or is Game of Thrones getting funnier? Not in a "this is dumb" way, but in a "they just put a fart joke in this episode" way.

WE ALL HEARD THAT SQUEAKY FART DURING THE INNER COUNCIL SCENE ON GAME OF THRONES. WE ALL HEARD IT.

Your ears did not deceive you, because thankfully KFC over at Barstool had the good sense to record video, and that was definitely a fart.

For what it’s worth, this actually isn’t the first fart ever to make an appearance on Game of Thrones, although this one from season two had a bit more, uh, build up: