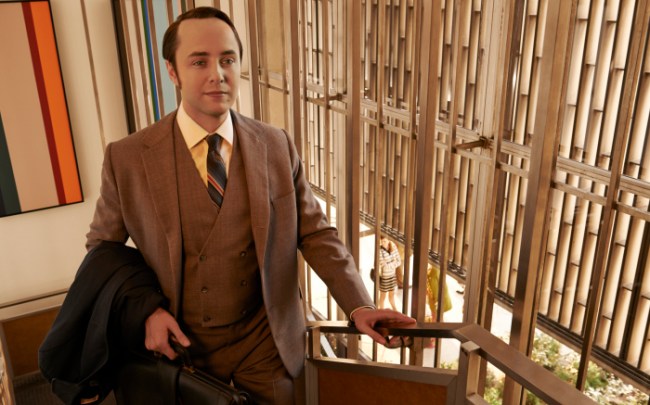 The final seven episodes of Mad Men are humming along, doing Mad Men-y things as we zero in on our end date. Don is making googly eyes at his daughter’s friends and humping ghost waitresses in dirty New York alleys, Stan has a beard and is humping 60-year-old sexual carnivore photographers, Joan is handling accounts on both coasts and humping grumpy retired millionaires, Roger has a mustache and is humping demanding French furniture thieves, etc. etc. etc. The usual. But as we wind down toward the finale and all it holds for the employees and associates of Sterling Cooper & Partners, I would like to take a moment to remind everyone of one important thing.

It is not too late for Pete Campbell to get eaten by a bear.

Not even close. There are four episodes left. That’s like 170 minutes of actual screen time, and maybe more if AMC lets Matthew Weiner supersize an episode or two. That’s PLENTY of time for a bear to maul and consume Pete Campbell. I mean, how long does a bear attack even take? Sixty seconds? They could do it coming out of a commercial, flash forward to the funeral, flash forward again maybe a week to have Meredith say, “I can’t believe that bear ate Pete. Anyway, Mr. Draper, your 2:30 is here. Shall I tell them you’re indisposed?” as Don grunts out a yes and a thick vapor of lunch scotch, and then roll right into another break. Bingo bango. Eight minutes and done. Everybody wins. Except Pete.

Actually, that brings up another point, and it’s one I touched on in my season preview. Do… do we even still want Pete to get eaten by a bear? I mean, do we, really? Sure he’s still kind of a walking turd weasel, but in the two years since I wrote my original bear-mauling plea, his edges have softened a bit. Maybe mine have, too. It was probably the thing where his overbearing mom got hucked over the edge of a cruise ship by a duplicitous male nurse. Mix that in with a few seasons of everyone from coworkers to train commuters socking him in the face for various crimes of douchebaggery, and part of me feels like the universe might have corrected things enough that bear violence isn’t necessary. Heck, he even stuck up for Don back when Jim Cutler tried to force him out. Pete’s, like, kinda okay now.

Yup, disregard that entire paragraph. Bear mauling is back on.

But how? How can we get Pete Campbell eaten by a bear? My original plan involved a bear in a trench coat strolling straight into the office and getting all the way to Pete without raising suspicion because people would just think it’s Stan. That’s not gonna work anymore. I mean, have you seen Stan’s outfits this year? No way a bear pulls them off.

And Pete’s not in California anymore, either, or going out on Michigan hunting trips with the Chevy yahoos. Those would have been so easy. For the love of God, California has a bear RIGHT ON ITS STATE FLAG. It was right there in front of you, Weiner! God! Now what do we have? Just Pete harumphing around the office with stupid fancy non-bear Stan, only venturing outside the safe confines of Manhattan for the occasional golf trip with clie…

Picture this: Pete steps up to the 13th tee. Par 5, dogleg left. The round is not going well. Don showed up drunk in a tuxedo, played the entire front nine with only a 3-iron and pitching wedge he grabbed out of the lost and found, and still somehow made the turn at +1. The clients love it, and Don, and Pete is ready to scream. He took lessons. Lessons. From a common club professional. The indignity. And in his still boiling rage he slices the ball 20 yards into the woods on the right.

He traipses through the trees and brush to find his ball, as the sounds of Don announcing, “I think I can get there in two. I got a great lie” from 50 yards ahead in the fairway reach his ears. Just then he hears a low rumble. What was that? A passing truck? Distant thunder? Wait, no. It’s not thunder. It sounds… primal. Hungry. Like a growl from a mighty beast. He looks left and sees it immediately. A bear. Staring at him with its teeth bared. He raises the top-of-line driver he purchased from the golf pro after his lesson, the one that got him into this mess (“I’ll have that charlatan’s job as soon as I gets back to the city,” he thinks), and brandishes it in self-defense.

The screams filled the air for minutes. Some say they can still hear them, even today, 45 years later, emanating from what is now referred to by locals as Dead Dummy’s Woods.

Don made birdie on the hole and then passed out in the bunker, to the delight of the clients.