Last night’s Mad Men ended with Don Draper headed west, no doubt to California, where his “heaven” awaits him, and his end point, Paradise, comes ever closer:

The coast, the beach, the ocean: This is how Don Draper described “heaven” in the sixth season premiere of Mad Men, and that’s exactly where Don is headed. But just as there was ambiguity in the ad that Don pitched to the Sheraton people in that sixth season premiere, there’s still some vagueness about Don’s fate. We know where he’s going, but don’t yet know if he’ll die a literal or a metaphorical death.

In last night’s episode, “Lost Horizon,” Don Draper drove to Racine, Wis. — where he was unable to locate Diana — and continued heading west (toward St. Paul with the hitchhiker). He’s headed to Los Angeles.

In the 7B premiere of Mad Men, Rachel reminded Don, “I’m supposed to tell you, you missed your flight,” and the plane that Don saw flying overheard during a pitch meeting at McCann clearly reminded him of that. He may have missed the flight, but he’s not going to miss his destination.

Weiner has been teasing California and the water for several seasons now. The question — again — is whether the “heaven” that Don described is “heaven on Earth” or the afterlife?

Recall, also, in the sixth season premiere of Mad Men when Jonesy the doorman died for a moment. Don asked him what death was like: “Was it like hot, tropical sunshine? Did you hear the ocean?” Don wanted to know if death was like paradise.

Also of note is that he also wondered in his pitch meeting with the Sheraton people in that episode why they’d confuse it for suicide a la A Star is Born. The man is not dying. “That’s not what this means.” He’s going to heaven, Don insisted. 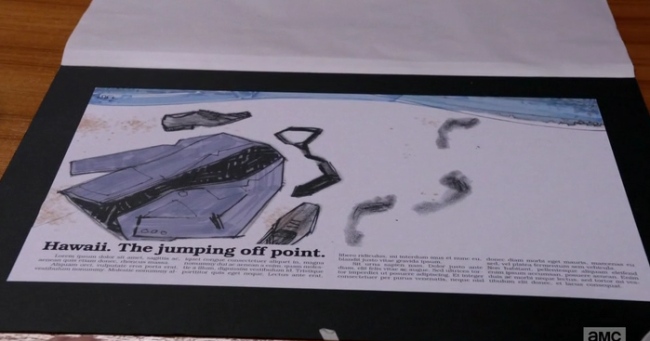 In that sixth season premiere, what Don was also reading Inferno, which we now understand foreshadowed the final two seasons and Don’s tour of Hell:

The three part of the Divine Comedy were the Inferno (or hell) (Don being suspended, losing Megan). He then ascended to Purgatory (Don’s time at Sterling Cooper before Satan (McCann Erickson) swallowed it); and Paradise, which is where Don is headed now.

It’s also where time will cease to exist:

How long has Weiner been teasing this fate for Don Draper? Look back as far as Season 2, the first time Don went to Los Angeles. There, he lost his luggage. It took him a while, however, but he eventually took off his suit to get into a hot tub with a woman. “Who are you?” Draper asked.

We know Don will die in the finale, but we don’t know if that will be a physical death or simply the death and the rebirth Dick Whitman. I still feel that it’s the latter: He gets rid of the suit. He gets rid of Don’s job (it appears that he’s already left McCann Erickson, and I doubt we’ll see him there again). He’s homeless (next week’s episode is called “The Milk and Honey Route,” a reference to a Nels Anderson handbook for hobos); he’s divorced Megan. He said goodbye to Betty (“Bye Birdie”). He’s a free man, headed west, like Kerouac in On the Road: “Whither goest thou, America, in thy shiny car in the night?”

He’s done with New York. He’s done with advertising. He’s done with Satan (Jim Hobart). He’s done with Don Draper. But while Don Draper drowns, Dick Whitman survives. “We’re not just selling a place,” Don says of “Paradise” back in the sixth season. “You are different… the soul can go in and out of the body, but it usually leaves from the leeward point, into the ocean.”

“The copy is all about the Hawaiian legend,” Don continues. “‘Aloha’ means hello (Dick Whitman) and goodbye (Don Draper).'” 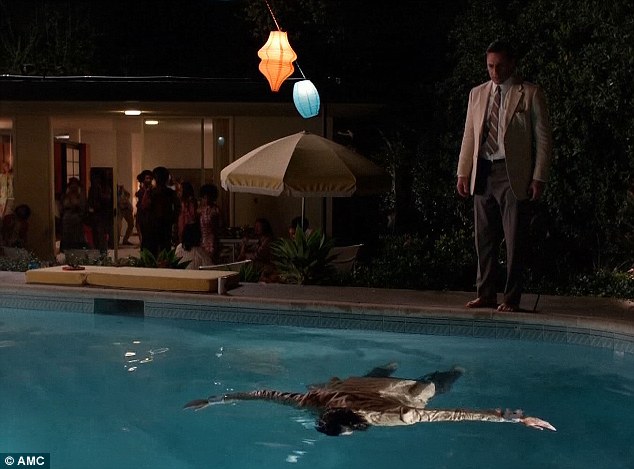 “How do you get to heaven?” he adds. “Something terrible has to happen.” That “terrible” thing was Sterling Cooper being dissolved by Satan/McCann. And now, Don is going to heaven.

“A picture of a hotel, even yours, is easy to ignore,” Don told his Sheraton clients, and Matthew Weiner may as well have been speaking to the viewers at home about his finale. “This (a man walking into the ocean), or some version of this, demands your attention.” Weiner was warming us up for a finale that sees Don, on the beach, walking into the ocean. Or maybe just his footprints headed into the water.

Does he die, like James Mason at the end of A Star is Born? “No, that’s not what this means.”