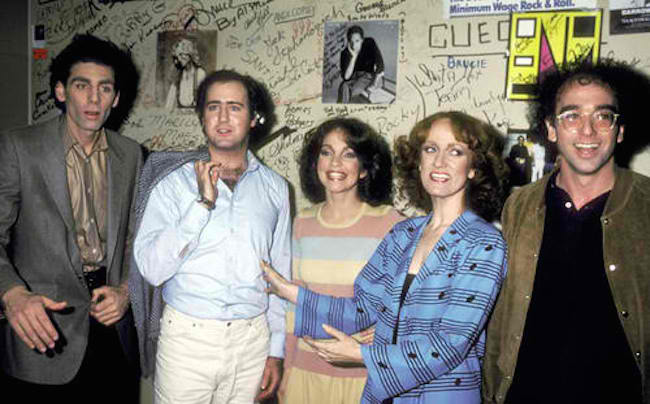 Let me take you folks back for a moment to the early 1980s. The original cast of Saturday Night Live had left the show, Lorne Michaels had taken a hiatus from the series, and it appeared as though SNL was vulnerable. Enter ABC, who attempted to take on SNL with an edgier and more ambitious sketch show. In fact, for a brief time, Fridays was considered a better sketch show than SNL, which had fallen precipitously after the departure of Michaels.

Among the cast members of Fridays were Larry David and Michael Richards (who would team up together again many years later on Seinfeld). Most of what aired on Fridays is forgotten now, unfortunately, because of a stipulation in Richards’ contract that said no episodes could be released on home video.

However, some of those sketches have made it on to YouTube over the years (and apparently, a DVD of the series was finally released earlier this year), including one of its most famous, described as the “Andy Kaufman Incident.” In the sketch, two couples go out on a dinner date, and one of the diners would occasionally sneak off to the restroom to smoke a joint.

However, when it came time for Kaufman to go, he demurred. He broke character and refused to read his lines. What happened next was amazing live television: Richards got up, grabbed the cue cards and threw them on the table. Kaufman responded by throwing a glass of water on Richards, and then all hell broke loose, as other members of the cast and crew on Fridays got involved, and a small brawl broke out. On live television.

Though the incident was staged, according to co-creator John Moffitt, it created so much press for the show that it managed to get Fridays renewed for one more season (it was ultimately cancelled after three seasons in 1982).

If you’ve seen the Andy Kaufman biopic, Man on the Moon, you may have also seen this scene reenacted with Jim Carrey and Norm Macdonald (playing Michael Richards).

For the latest viral stories burning up the Internet…