‘You Don’t Have To Go Home, But You Can’t Pray Here’: 8 Questions We Have After This Week’s Insane ‘Preacher’

This week’s episode of Preacher, “Sundowner,” began to bring much of the insanity that the series promised in the pilot episode, here in the form of a 10-minute opening scene featuring three dozen corpses and no dead people. We also got answers to some of the burning questions we’ve had all season long, and by the episode’s end, the series had begun to explore in earnest one of the spiritual questions driving the series.

There are only four episodes left of the season, and Preacher has rounded the corner and is sprinting toward a wild season finale. Here’s what we learned in “Sundowner.” 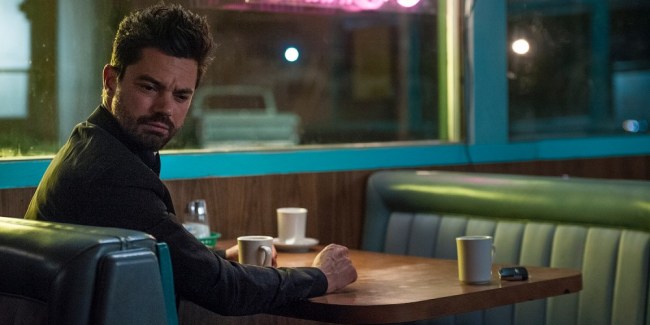 We finally know what the spirit possessing Jesse is. It isn’t God. It’s a mistake. It’s the product of an Angel and Demon who fell in love during the endless war between Heaven and Hell. Genesis was a thing that was never meant to be, an angel-demon baby with enough force to shift the balance of power and threaten the entire creation.

In other words, it’s a very big deal, and the angels and demons want the power for themselves, so they can use it to win the war between Heaven and Hell.

What is a Seraphim?

According to the dictionary, a “Seraph” is an angelic being, regarded in traditional Christian angelology as belonging to the highest order of the ninefold celestial hierarchy, associated with light, ardor, and purity. According to the show Preacher, Seraphim are also angels of the first order, but they also seem to be God’s bounty hunters, capable of extreme violence. They are the guardians of Heaven. All they want is order and peace. The blonde woman with a never-ending supply of bodies is a Seraphim, as opposed to Fiore and DeBlanc, who are Adephi Angels — they are administrators, in this case put in charge of containing Genesis. This particular Seraphim has been ordered to go back down to Earth to retrieve Fiore and DeBlanc, who left Heaven without permission.

The Seraphim also doesn’t know about Genesis. Yet.

The power of Angels — Seraphim or Adephi — to regenerate with an apparent endless supply of bodies. Reinvigoration doesn’t hurt. It just happens. Sometimes, the new bodies appear immediately where the old ones died, and sometimes they reappear further away after a longer period of time has passed. The only way to prevent reinvigoration is to restrain the angel, rather than kill her. In the case of this particular Seraphim, Fiore disarticulated her to restrain her. In other words, he separated the bones at the joints.

What is the “other option”?

After Jesse told Fiore and DeBlanc to stay away from him, Fiore mentioned the possibility of another “option” to retrieve Genesis. What is that other option? I’m not sure, but it’s likely the Saint of Killers, that Cowboy from 1881 who we have met on a couple of occasions. That may be how they bring The Cowboy into present time.

Are Tulip and Emily friends now?

Sort of? They both clearly have affections for Jesse, which they can bond over. However, this friendship is almost certainly self-serving for both women. Tulip can find out more about Jesse’s present from Emily, while Emily can learn more about his past from Tulip. The two will likely use that information to continue their pursuit — romantic and otherwise — of Jesse.

We also found out that Tulip once had a daughter, a piece of information that helps Emily to bond with her. The story about that baby might also play into her history with Carlos, the man she is trying to recruit Jesse into helping her kill. Jesse may have been the father.

Who is the ‘mean old lady’ who gave Jesse his back tattoo?

An otherwise throw-away line probably means something to readers of the source material. The “mean old lady,” to whom Jesse was referring was likely Marie L’Angell. Her storyline likely will not arrive until season two.

What was the ‘right’ choice for Miles Person?

Why did Eugene ask Jesse to ‘take it back’?

The bigger question, really, is whether God’s will is being served through Jesse’s powers of commands by virtue of God supposedly choosing Jesse as the vessel for Genesis? Or is God’s will being better served by guiding Jesse’s congregation and letting them see the light themselves? As Dominic Cooper explained to THR: [Eugene is] more truthful. He’s more honest. He gets it better than Jesse. He gets why Jesse shouldn’t be doing these things. You can’t force someone to change their lives. You need to learn these lessons yourself. You learn how to be forgiven, or you get forgiveness in a different way. You can’t force it.”

It’s a debate that Jesse will likely wrestle with often in the first part of the series, but it all may be moot once Jesse finally realizes that God did select him as the vessel for Genesis, that God in fact had no say in it. Genesis isn’t God. Genesis is a “mistake,” and that mistake chose Jesse. God didn’t. None of this is the will of God, but it may be the will of something more sinister, and the way that Jesse is using it may play right into Genesis’ hands.