In the five years that it’s been on the air, during which it became the most-watched show on television, The Walking Dead has never received an Emmy nomination outside of the technical categories. No director has ever been recognized, no episode has ever been extolled for writing, and no actor has ever had his or her performance singled out for Emmy recognition. The Academy of Television Arts & Sciences has a blind spot when it comes to The Walking Dead, one stemming from the assumption that a show about zombies isn’t worthy of being recognized for its creative and acting efforts.

That may have been true in the Frank Darabont years, when the series slogged through the forest and the actors delivered heavy-handed lines, often awkwardly. It may have also been true during the Glen Mazzara era, when The Walking Dead overcorrected and became an action-heavy series that frequently sacrificed character development for shocking moments.

However, under the current showrunner, Scott Gimple, The Walking Dead has become something far more than a zombie drama. It’s a show of substance, one about characters who evolve and who are transformed by their experiences. It’s a show about dread, heartbreak, and occasionally the joy of living even in the midst of desperate times. Gimple has built layers into the storylines, brought more humor to the series, and even dropped the occasional literary or Biblical reference.

Gimple’s The Walking Dead also explores weighty themes, chief among them the question surrounding what it is that makes us human, and how do these characters hold on to that in a world overrun with non-humans? That theme, again, is at the forefront of The Walking Dead as season six opens. Rick, on the cusp of losing his own humanity at the end of last season, comes face to face with a man who once lost his, Morgan (Lennie James), as Rick witnessed the last time the two were together in season three’s “Clear.”

From a storytelling perspective, it’s no coincidence that Morgan would reappear in Rick’s life now. Rick began his journey in the post-apocalyptic world with Morgan. Morgan nearly ended his own journey with Rick before Rick brought him back from the edge. “You can come back from this. I know you can,” Rick told Morgan three seasons ago. “This can’t be it. It can’t be. You’ve gotta be able to come back from this!” 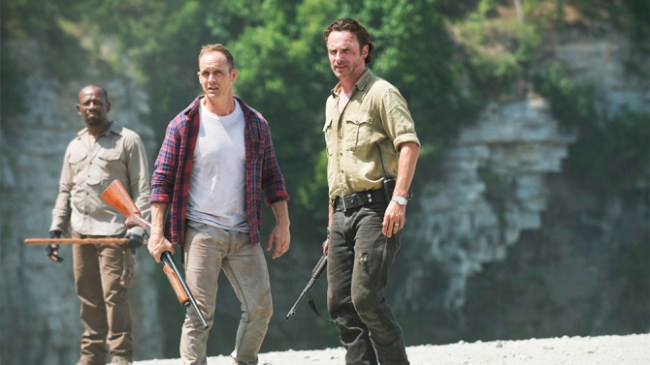 In the sixth-season premiere, Morgan makes reference to that conversation twice, the implication being that Rick can also come back from the edge of a nervous breakdown. In flashbacks, season six picks up where it left off at the end of last season, with Morgan having witnessed Rick put a bullet in Pete’s head. Rick Grimes has gone full Ricktator again, and while his followers warily stand back and trust in their leader, many in the Alexandrian camp continue to fear Rick. The last time many had seen him, after all, he was waving his gun around and raving manically before Michonne shut him up with the butt of her gun.

However, the now Zen-like Morgan sees something in the unhinged Rick that he recognizes. Rather than being confrontational, however, Morgan acts as a calming influence on Rick. Morgan is there to save Rick before Rick finally does something that he can’t take back. “You can come back from this,” Morgan seems to be saying to Rick, as Grimes faces one of his most difficult challenges: Winning over an entire community of people who fear and distrust him, some of whom want him dead.

That’s the backdrop against which season six plays out. I wouldn’t dare spoil the storyline that unfolds in the opening episode, except to say that it almost feels as though Gimple and Robert Kirkman saw the “Hardhome” episode of Game of Thrones and said to themselves: “Let’s do that!” At the center of the episode is what I can only refer to as a zombie caper, more massive than anything that the series has undertaken so far. It’s epic in scale, and rich with visual effects. This colossal zombie heist offers two paths: Will the existing members of Alexandria bond with Rick, Daryl, Michonne, Carol and the rest as they attempt overcome their biggest, most dangerous threat, or will their differing philosophies pull them even further apart?

The premiere also pulls together many of the threads left dangling at the end of season five. How will Nicholas and Glenn get along? Can Deanna continue to be an effective leader after the death of her husband? Is Sasha still feeling suicidal? How will Tara cope with the death of Noah? Is there still a flicker of attraction between Rick and Jessie, after Rick killed Jessie’s abusive husband? Will Eugene ever find someone who understands his mullet? (Yes, yes he will!) Several new characters are also seamlessly introduced as Alexandrians who had been there all along. We simply had not met them yet.

I am mindful that overhyping the premiere could create expectations that the episode may not ultimately be able to live up to, but I’m not worried about that here. “First Time Again,” co-written by Gimple and Matthew Negrete, is a phenomenal episode, one of the best of the series. It advances the plot, develops the characters, and perfectly blends huge zombie action sequences into the mix. Moreover, it features the kind of Andrew Lincoln performance that ought to get him notice from Emmy voters. He has to walk a fine line between unhinged and sympathetic, and he pulls it off brilliantly.

If the premiere episode is anything to go by, the series is only continuing to get better. If Gimple can successfully catch all the balls he throws in the air in the premiere, The Walking Dead has a good chance to be more than one of the highest-rated series on TV. It can also be one of the most critically beloved series on television.