We’ll Do It Live: 10 Open Questions We Have After The Season Premiere Of ‘The Walking Dead’

The Walking Dead returned with a ferocious season premiere on Sunday night, introducing the most massive zombie threat of the series and laying out several of the potential storylines this season.

1. Who blew the horn in Alexandria?

The obvious answer here is that it is the Wolves, which makes sense as a callback to last season’s finale, when Morgan dumped the unconscious bodies of two Wolves into a car and honked the horn. There are other possibilities, however. It could be Father Gabriel, who is not exactly thrilled with Rick. It could also be Ron, in retaliation for Rick killing his father. Or it could be any number of Alexandrians using a horn to beckon Rick and the rest of the Alexandrians back to the community, where the Wolves could possibly be invading, taking advantage of the fact that the strongest members are out diverting zombies.

In any respect, the Wolves are almost certainly involved.

When I floated this idea in the episode recap based on the fact that Glenn wanted Maggie to stay behind, it felt like a long shot. However, the only other time Glenn asked Maggie to stay behind was when they thought she was pregnant in the fourth season. Moreover, several other outlets have arrived at the same conclusion.

(Comic book spoiler: In the comics, there is a pregnancy plotline involving Maggie that unfortunately coincides with the arrival of Negan and the demise of Glenn.)

3. Will Carl lose his virginity and/or something else this season?

There’s the potential of a comic-book plot line (spoiler) coming into play for Carl, where he loses a certain body part this season. The way he has been canoodling with Enid, he may lose something else before the season is out. He apparently gets to deliver his best line ever this season, and how appropriate would that be coming right after he beat Eugene (probably) in the race to get laid?

4. With Carter dead, is that the end of the potential coup to take out Rick?

When Carter attempted to lead a rebellion against Rick in the season premiere, the other Alexandrians didn’t seem that interested, but they also didn’t shut him down, either. With Carter out of the way, will there be more attempts from within Alexandria to take out Rick? Andrew Lincoln, after all, notes that the fallout from the scene in which Rick takes a gun away from Carter and points it at him will reverberate throughout the next seven episodes.

5. Where is Rick’s head right now?

The reason others — including Morgan — may ultimately turn against Rick is because he’s losing touch with humanity. On the porch scene in the season premiere, Morgan seemed to suggest that the real Rick is the one that didn’t pull the trigger on Carter. However, is the Rick who lets the weak die any better than a Rick who would kill the weak? What happened to the Rick who wanted to make the weak strong?

Rick’s become an enforcer, not a leader. He’s a bully now, and that’s bound to catch up with him.

6. Will Rick and Daryl come to blows?

The tension is beginning to build between Rick and Daryl, who have been close for seasons. Now Daryl wants to go out and recruit — and save — others, while Rick is more interested in self-preservation. Again, this conflict is likely to play out all season long. Rick is only interested in protecting his people, even if that comes at the expense of others. There has to be a better balance.

7. Will Rick and Jessie scuttle any immediate Richonne plans?

Outside of Maggie and Glenn, The Walking Dead hasn’t really dabbled in romance too much. However, it’s obvious that Rick has a thing for Jessie, and Jessie is intrigued, but afraid of Rick. How does this play out throughout the season? Is the lure of Jessie enough to soften Rick? Or, if Jessie continues to thwart him, will that push him over the edge?

8. When will Carol be outed? 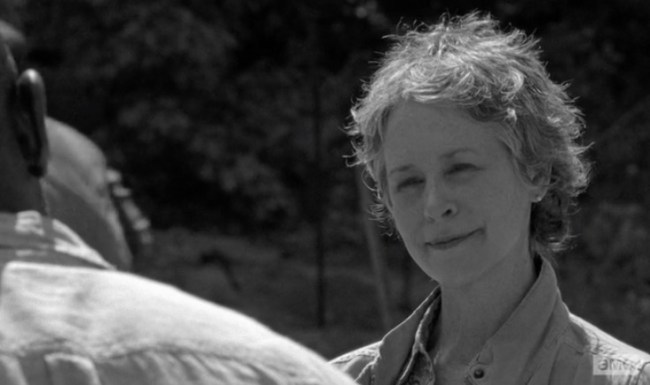 Jessie’s youngest son, Sam, knows the truth about Carol — that she’s not the den mother she’s pretending to be. How long does that stay a secret? If the camp divides among alliances, Carol is going to side with Rick, undoubtedly, and that may prompt Sam to reveal that secret if it’s not obvious to everyone else by then. Morgan already seems to know that she’s not who she appears to be, after all.

9. Who will present the biggest challenge to Rick’s authority?

It could be Morgan. It could be Daryl. However, I like what’s being hinted at with Maggie. She’s interested in aligning with Deanna, and if Deanna breaks from Rick, she and Maggie could make for formidable opposition. She has the experience out in the world, but she’s not hot-headed. She also has alliances with Glenna and Tara, and by extension, Eugene. I could envision a scenario in which Maggie and her alliance makes a power play against Rick and Carol.

The series likes to knock off those who have completed a redemption arc, which makes Father Gabriel or Nicholas (or both) as the most likely victims, should they decide to sacrifice themselves for redemption in the next episode or two.