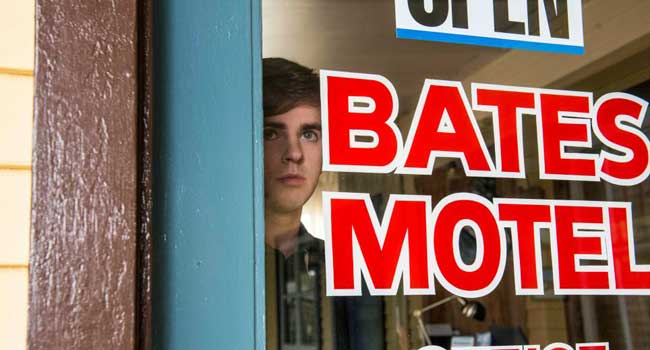 Bates Motel (A&E, 9:00 p.m.) – Everyone’s favorite incestuous duo is back, and after almost offing himself last season, Norman’s as psycho as ever. Apparently, Norma has finally clued in to her son’s special brand of crazy and is currently trying to rein it in. (It’s a little late for that, lady.) According to executive producer Kerry Ehrin, Season 3 will be delving into the Psycho mythology even more, so get ready to be terrified of taking a shower all over again.

The Following (Fox, 9:00 p.m.) – In this episode, Kevin Bacon boxes, wears a FBI jacket, continues to obsess over a killer he’s put behind bars, deals with another psycho murderer who’s still hung up on his mother’s death and does his best to make us forget about this:

2 Broke Girls (CBS, 8:00 p.m.) – We learn two valuable lessons from tonight’s episode. Lesson one: When a hostage situation interrupts your impending nuptials, it might be time to rethink the whole “getting hitched” thing. Lesson two: Criminals never make for good cupcake shop mascots.

The Bachelor (ABC, 8:00 p.m.) – Chris takes two ladies back to Iowa to meet his family and decide which one he’ll propose a temporary engagement to.

The Originals (CW, 8:00 p.m.) – It always sucks when the body you’re inhabiting comes complete with a pack of vengeful witches. Rebekah enlists Marcel and Elijah to help her deal with her host’s questionable past, while Klaus tries his hand at this new co-parenting thing with his hybrid baby mama and her werewolf husband he had hoped would be dead a couple of episodes ago.

The Voice (NBC, 8:00 p.m.) – After weeks of waiting, the blind auditions are finally over, and the contestants are treated to actual industry advice by artists who understand that mentoring means doing more than just sitting in a chair, pushing a big button and making goo-goo eyes at Adam Levine. Ellie Goulding, Lionel Richie, Meghan Trainor and Nick Jonas serve as tonight’s advisers.

WWE Monday Night Raw (USA, 8:00 p.m.) – Wiz Khalifa proves what we’ve suspected all along; he’s a fan of watching men slathered in too much baby oil touch each other for three hours. In other news, John Cena finds out if he’ll get his WrestleMania match.

Jane the Virgin (CW, 9:00 p.m.) – Jane gets the romance writing bug when her favorite author comes to town – she’s also not getting any bedroom action herself so that might be a factor in her newly discovered desire to write a bodice ripper – and Rafael might be popping the big question. I feel like that should’ve happened a few episodes ago. I mean, you did accidentally artificially inseminate her and then beg her to keep the baby. It’s only fair you put a ring on it.

Swamp People (HIST, 9:00 p.m.) – “Alternative forms of bait are used by the hunters.” Maybe they’ll feed Jeromy to the gators. (Just kidding… that guy is annoying though.)

Scorpion (CBS, 9:00 p.m.) – The only thing preventing the start of a third world war is a socially awkward super genius, his rag-tag group of socially awkward friends and their team’s nanny, a former diner waitress.

Eye Candy (MTV, 10:00 p.m.) – Things get real when Lindy’s sister is kidnapped (because the murder of her ex-boyfriend just wasn’t a serious enough warning to never sign up for eHarmony again).

The Returned (A&E, 10:00 p.m.) – In the show’s season premiere, a small town is thrown into chaos when its deceased citizens start turning up, considerably less dead than they used to be. Spooky? Yes. Original? Eh, you can watch its French predecessor on Netflix if you don’t mind the subtitles.