I may have had a lot of annoyances with this week’s episode of True Detective (20 annoyances, to be exact), but I will not deny that underneath the convoluted plot, some overwrought writing, and some irritating character tropes, there is quite a compelling mystery brewing. Who killed Ben Caspere, i.e., who is the Bird Killer, is the major question mark this season, but there’s another murder mystery that may ultimately prove pivotal.

Who is Stan? That’s a question I spent some time trying to figure out after the third episode of True Detective aired, but now I have another question, the one posed by Vince Vaughn’s character, Frank Semyon:

What does Stan mean to anybody?

This guy, the Russian? Osip?

I don’t see it. He may be a long shot for the death of Caspere, so thinks Frank…

… but what’s he got to gain by killing Stan? He’s pulling out the deal, not trying to come after Frank. That makes no sense even if Osip is half-anaconda, half-great white.

I don’t think it’s Santos or any of his former criminal associates, either. Not only would they have nothing to gain, but, as Santos learned, getting Semyon involved in his criminal past again only hurts them.

As best I can see it, there’s really five people who have the most to gain by killing Stan.

1) Frank killed him. It’s a very long shot, but by killing Stan himself, Frank gives himself an in back into his criminal past; he takes down Santos, puts the fear of God back into his old criminal associates, and reintroduces an old revenue stream (as he did by shaking down the contractor). Going straight hasn’t exactly worked out for Frank. Maybe this is how he earns back the money he needs for the land deal.

2) Lady Semyon is another improbable suspect, but, assuming she could could foresee that Stan’s death would give Frank back his vigor and boost his confidence — as beating up Danny Santos has clearly done — then Jordan Semyon is not totally out of the question. After all, she did “stay up” for him, with the expectation that they’d be having make-up sex when he got home (she was sadly disappointed). She wants to make a baby, Frank can’t get it up, and after that papier-mâché speech, maybe she thought her husband needed a confidence booster. It’s exactly the kind of thing a Lady MacBeth (or a Gemma Teller Morrow) might do. 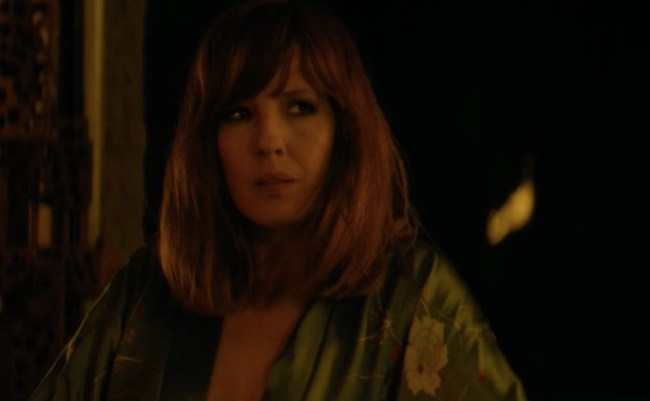 3) Mayor McCheese may have been trying to send a message to Frank, about not “pulling down walls,” as Frank threatened when the Mayor of Vinci pushed Frank for the $10,000 in kickbacks that Frank owed him for the poker room. (Another related but very remote possibility is a guy named Gene Slattery, who we haven’t met. He was the guy that Frank took the poker room from six years ago, and maybe Slattery has revenge on his mind).

4. Bart Sallis, i.e. the contractor that Frank has decided to shake down again. He’s certainly got motive to come after Frank because Frank has decided to return to his criminal past — and extract money out of Sallis’ vertical mall project — but he also fairly amenable to Frank’s demands. Also, given the implied threat that Frank made toward his family, I doubt that Bart would come after Frank indirectly.

5. Ray Velcoro is my favorite suspect. I’m not saying it’s highly likely that he killed Stan, but I am saying that Ray definitely had something to gain by doing so. Recall that we’ve only seen Stan twice in the series. Once, he maced a bookie in the face, and the other time? — in the first 10 minutes of the series, in a flashback.

He was there when Frank told Ray who raped his ex-wife. He’s one of the few people who knows, and therefore knows Ray murdered the rapist. Ventura County is coming after Ray hard, and Ray is terrified (which is why he wanted to know from Ani what the state had on him). As we learned from Ray’s ex-wife, the feds are also digging into that murder. Ray — who we know is capable of murder, and hasn’t rolled over on giving up custody of his son — may want to get rid of anyone who could implicate him in that murder. Stan may have been a message to Frank’s other henchman to keep their mouths shut. Or he may be the first to die. He could also be sending a message to Frank, a message that basically says, “F*ck you, I don’t owe you anything anymore, and you can’t hold that murder over my head any longer.”

Recall also that Frank did threaten to turn Ray over for the “dumping the body” of the rapist. “Meaning you’d consider life in prison, what? A positive?” Frank threatened. Also, who is more angry at Frank than anyone right now? Ray. Remember, he’s “apoplectic.” He’s so mad, in fact, that he turned down a drink. For Ray Velcoro? That’s a big deal. “Booze tends to take the edge off. I want to stay angry.”

Angry enough to kill Stan? Maybe. After all, he thinks Frank sent him to a trap in Caspere’s sex dungeon. Ray has a violent temper. He is not above murder. He has a motive. And if he had enough time to go out and get his Dad a bag of weed, he had enough time to track down Stan and kill him.