Welcome back to our various stages of reopening reunion! Phase (insert whatever numerical reopening stage where you live is at) friend? Testing out new things to call you, dear reader, as well as what we’re seeing from players in this column.

I have to level with you: It was my hope to cover everything in NBA isolation until that isolation ended, either with the season being called, resuming, or, in a perfect world, shifting directly into NBA summer vacation. But starting this, there was no way to see ahead to now with messy things have gotten. We’ve lost the initial equalizing experience of the pandemic, and in their return to play and staggered arrivals to Orlando or seasons ending, basketball players have, too.

So how long does this go now? Will you trust me when I say until it feels right to gently close the gilded cover on this scrapbook of basketball in a pandemic? Yes? Thank you.

Beal marched on Juneteenth in Washington this week. John Wall, Rui Hachimura, and Ian Mahinmi all went with him. Beal also spoke about the significance of Juneteenth and called for accountability from police all the way up through every level of government. Without getting too ahead of ourselves, and shifting attention from where it needs to stay (justice and equality for Black lives), this tragic and powerful past spring into summer has amplified player’s voices in a very tangible and necessary way, and there’s no going back from it.

Rating: It has also shown there is no way in good conscience to ever trash talk the Washington Wizards again. 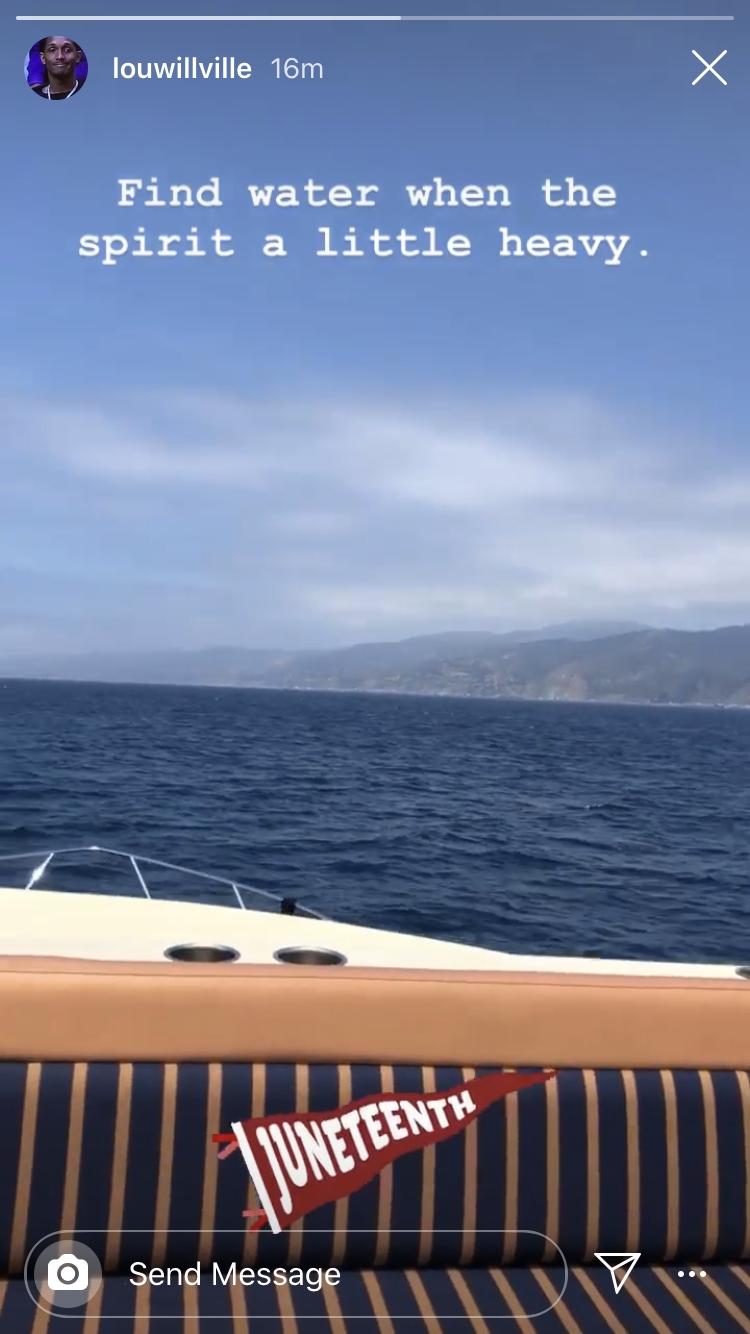 Williams hit the water on Juneteenth and offered some advice for anyone feeling overwhelmed, worn down, or otherwise carrying a lot of psychic weight. It’s good advice. There are plenty of studies that show even a prolonged bath, if you can’t make it to open water or a pool, is good for the human brain as a stress regulator. So take it from Williams and science, please.

I couldn’t tell you if Rozier just got this, or he’s had it all along and only now decided to match his outfit to this gigantic jeep and strike a pose on it in the sunshine, but both are well beside the point. Take it from Terry and find joy where you can, folks.

Rating: And include your friends if you can, even if it is them pointing at you like, “Get a load of this guy.” 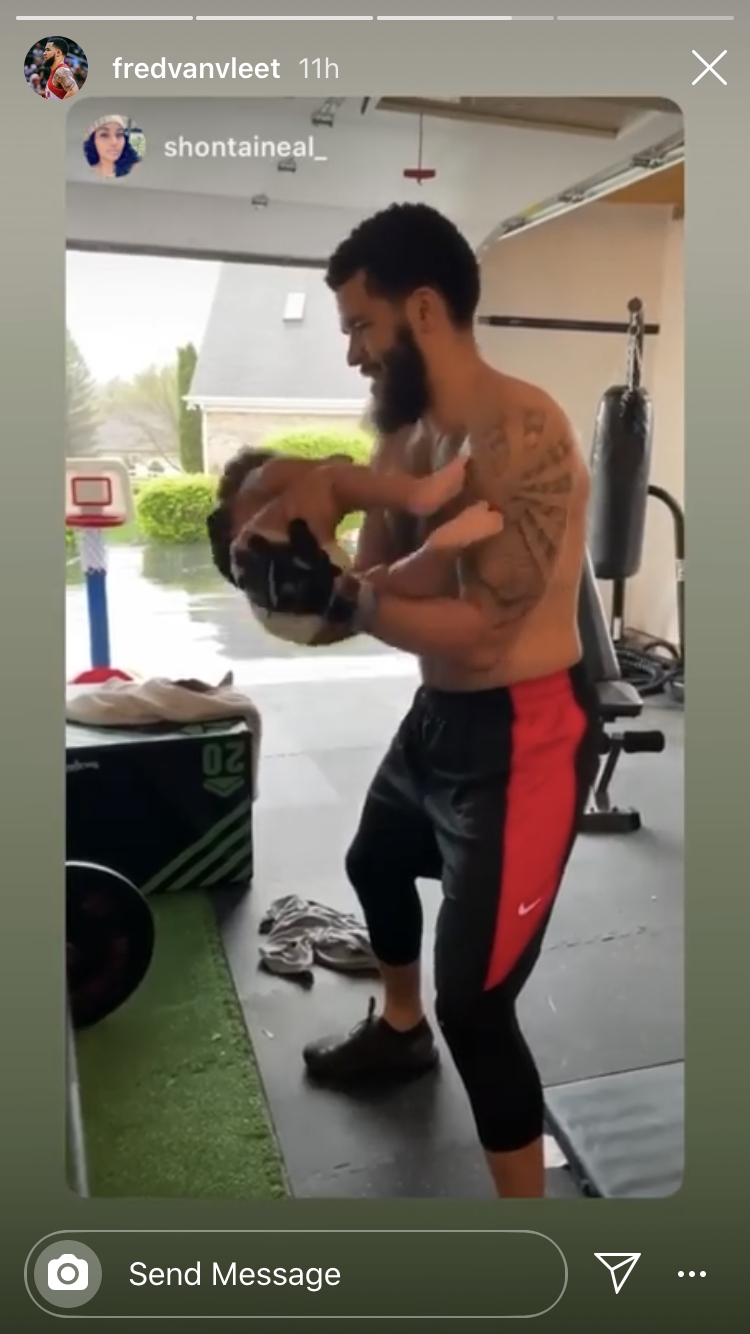 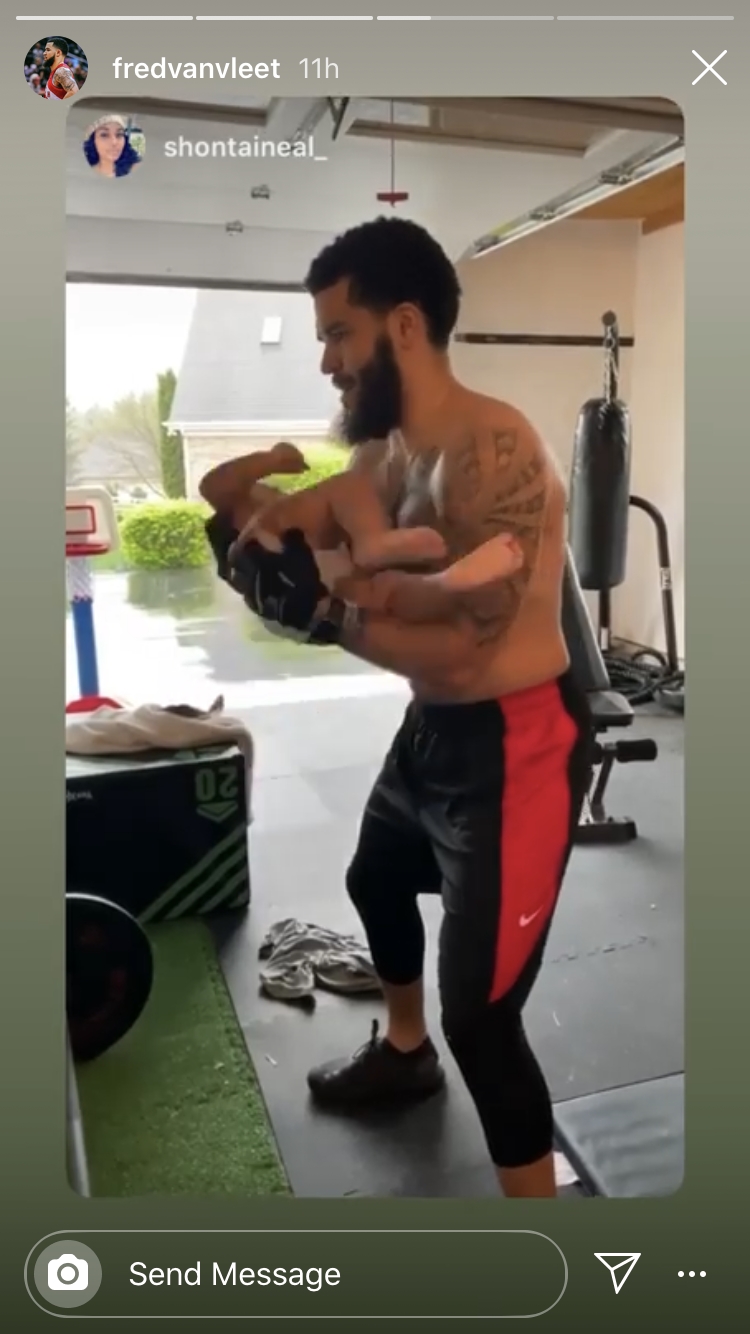 For Father’s Day, VanVleet carefully curled his one year old son as a very cute and powerful weight. Fred Jr. was born last year during the Eastern Conference Finals. Everyone knows the boost he gave to his dad in slaying the Bucks, and he is putting forth that protection now as VanVleet heads to Orlando early with the Raptors.

Rating: Cute and strong, a motto for living. 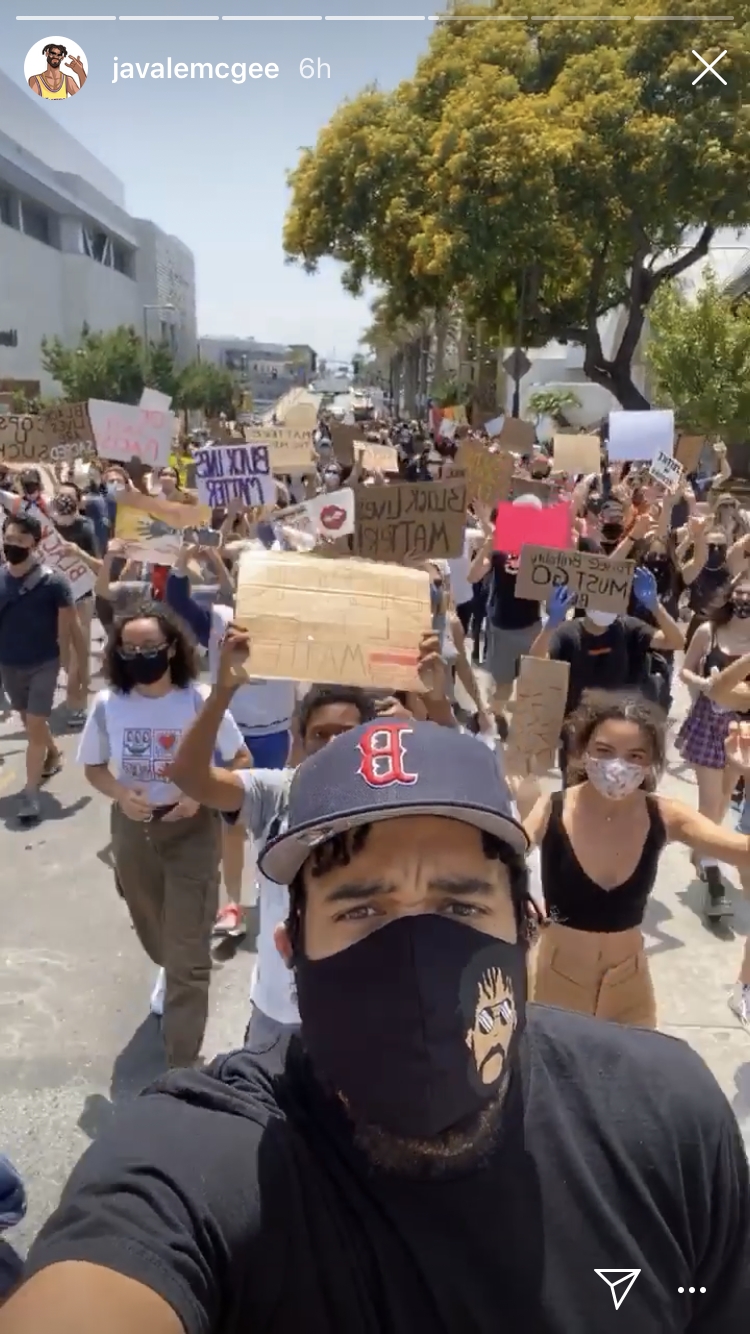 McGee marched this week in a Juneteenth rally in L.A., masked up with a pair of the most expressive eyes in the league imploring you, the viewer, to keep the pressure and support on where it counts.

Rating: I question greatly your capacity for compassion if you are able to ever let JaVale McGee down and sleep at night. 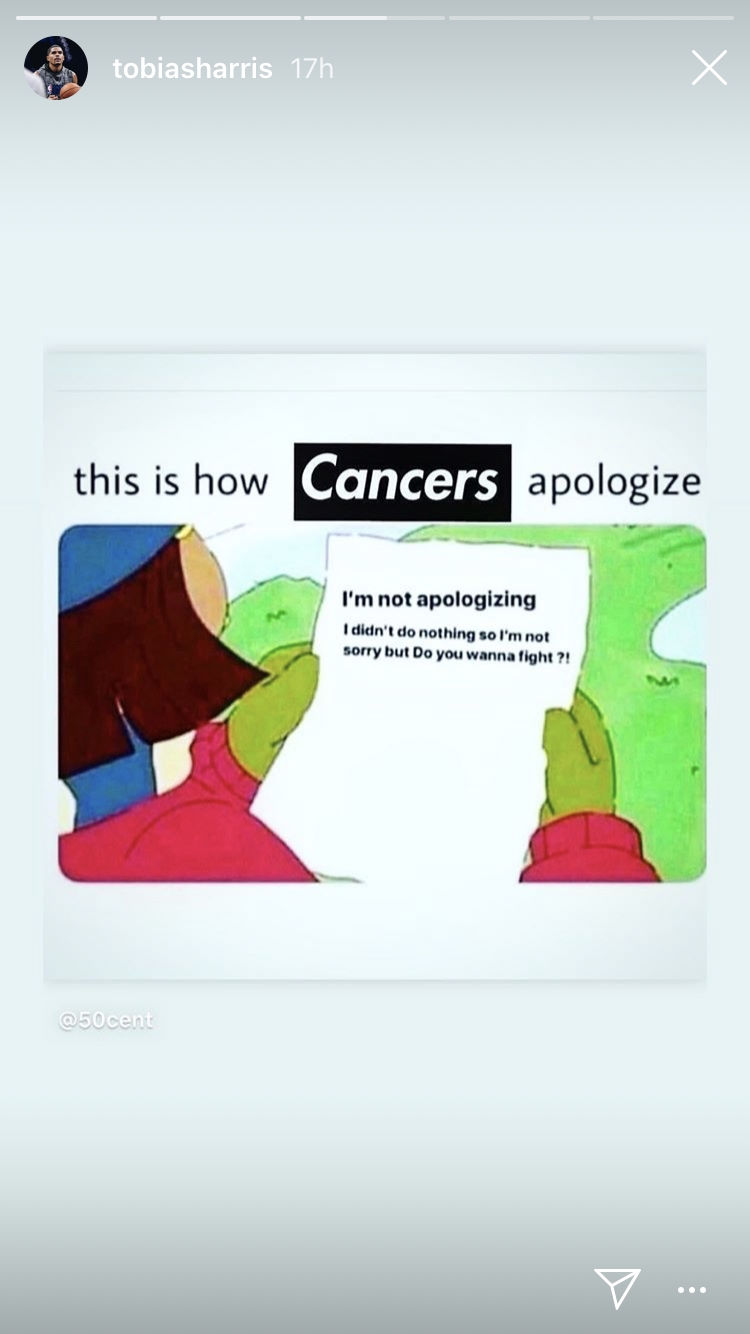 Have we shared posts of players sharing astrology memes here yet? It was a matter of time. If you hadn’t — how? — heard, it’s Cancer season. Overall that means it’s a sensitive time where a groundswell of change is possible but only if we are open about our vulnerabilities and shortcomings. Cancers, how do I put this, not always the best as embodying this? Anyway this is a pretty good meme. 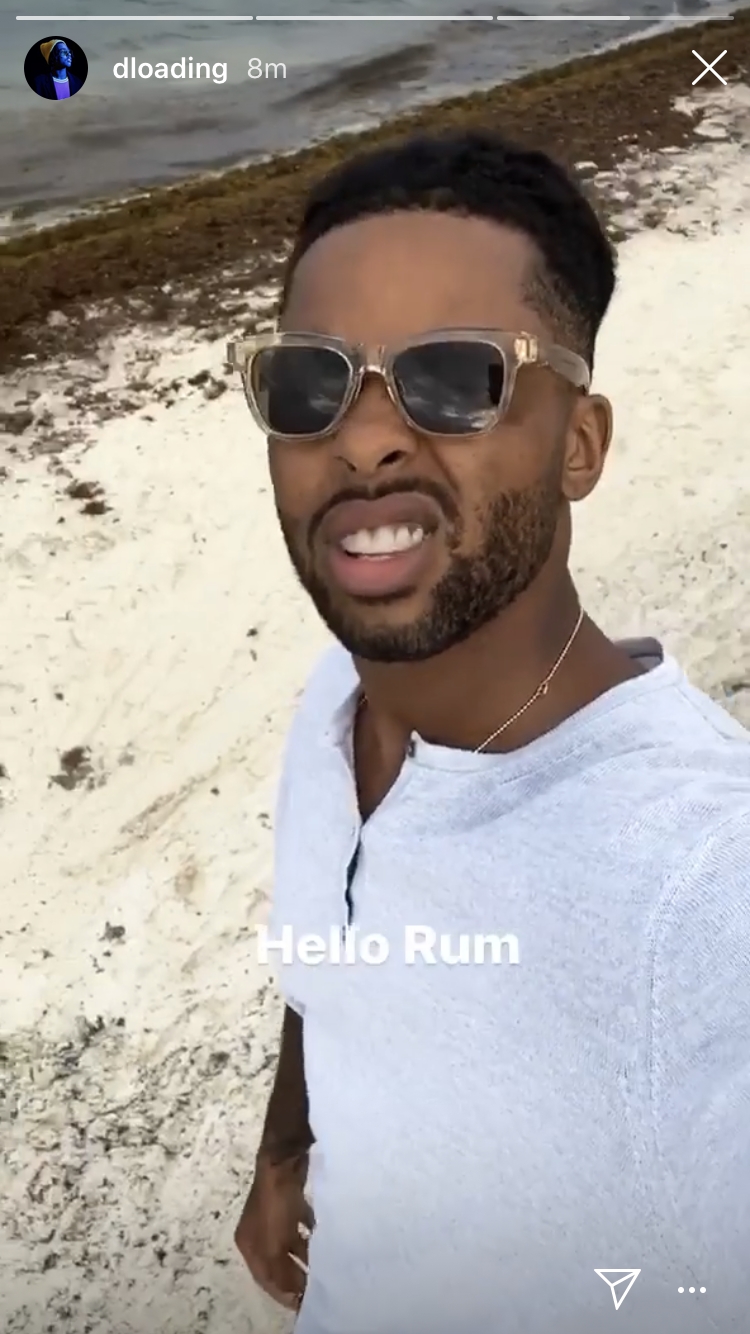 D’Angelo Russell took a trip to Mexico this week and despite the caliber of his on camera expressions, seems to be having fun. He arrived, greeted “rum,” took a plane ride, piloted the small craft (apologies for this very stretched out version of his face, maybe something to do with flight speed and Instagram?), and attempted to s’more. 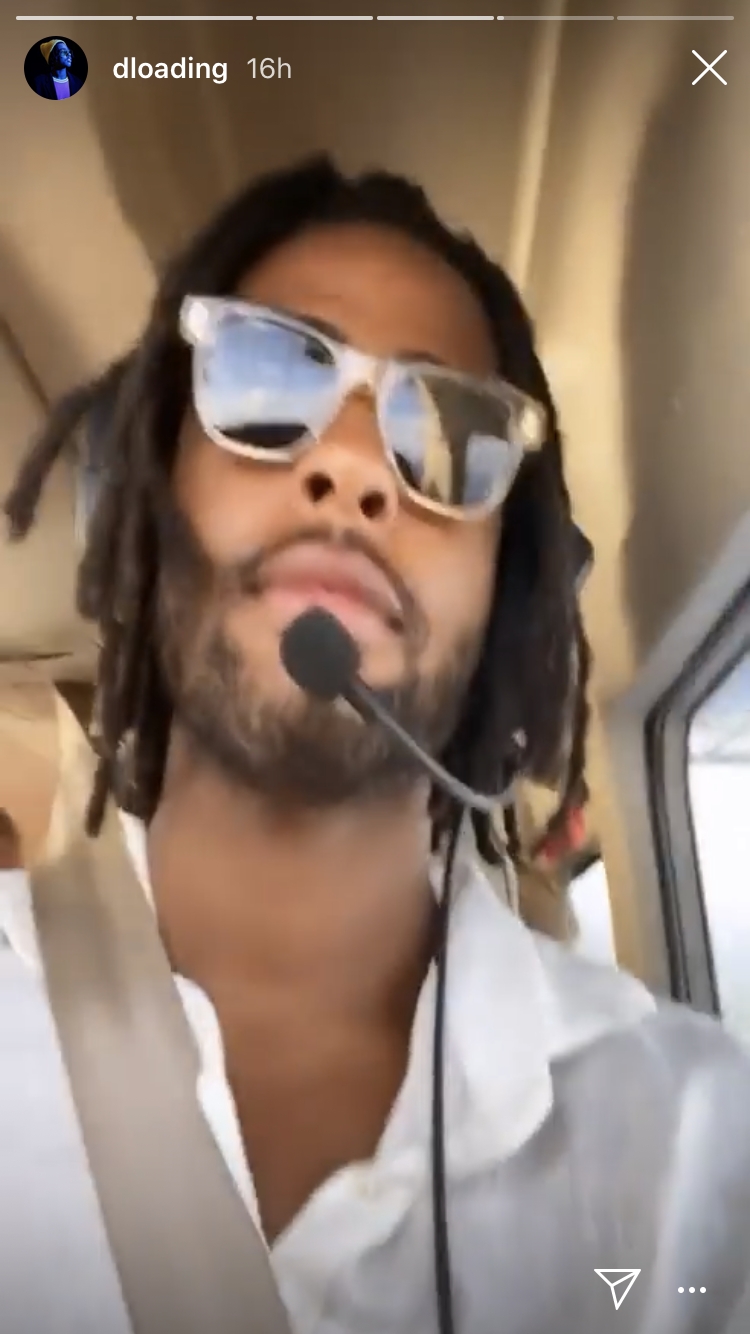 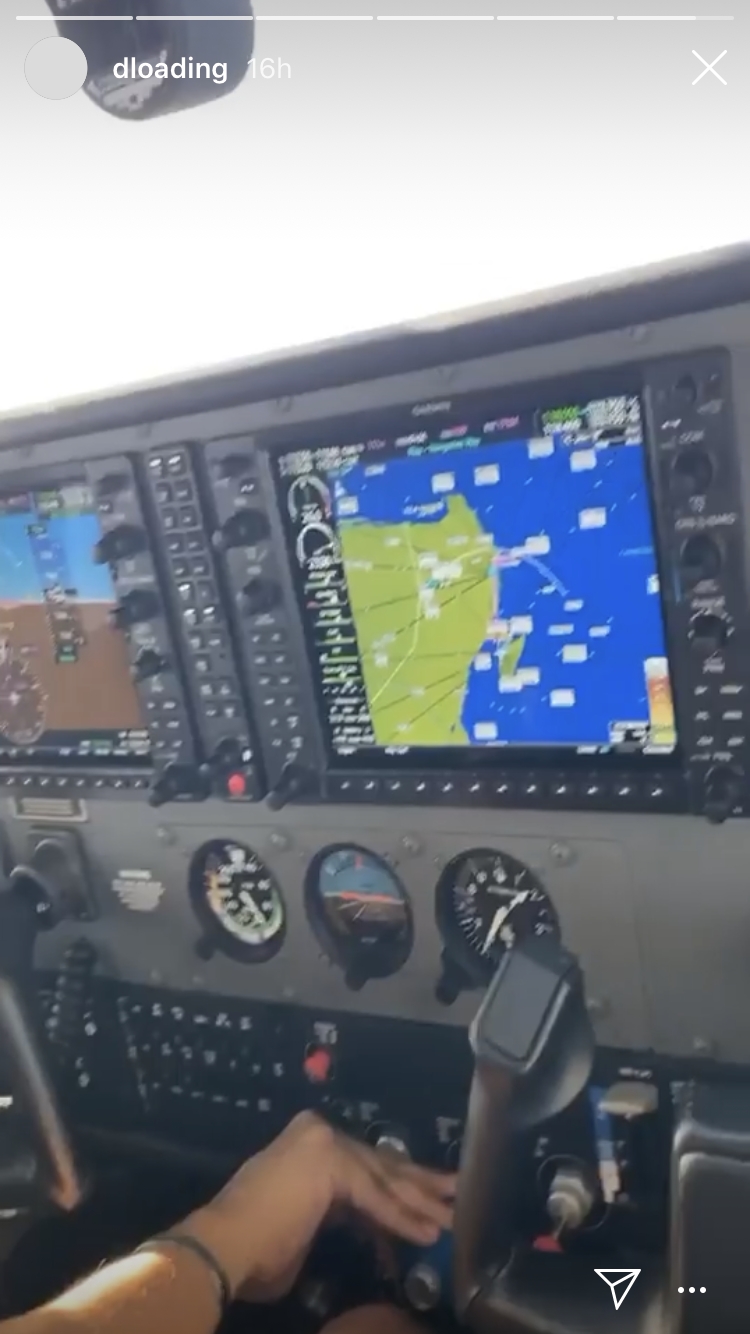 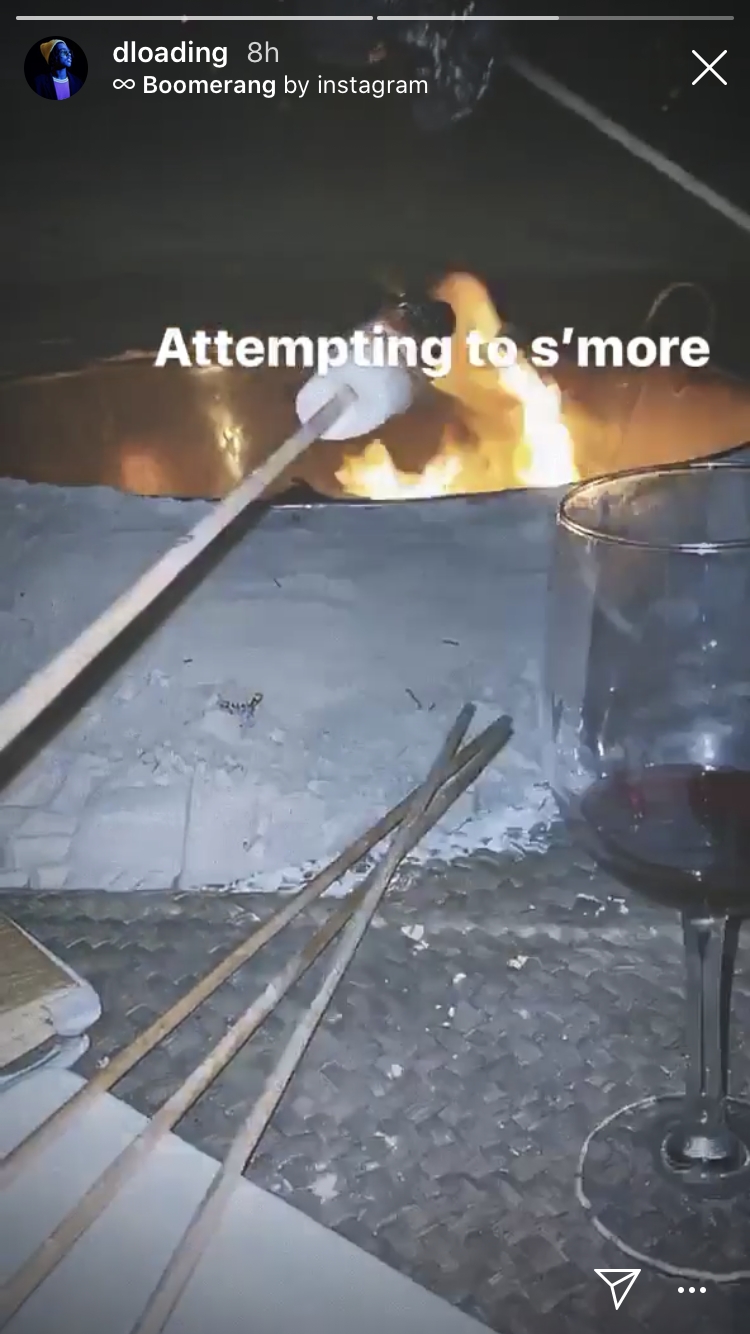 I hope he was successful in that attempt because this is one dude who could use some sweetness in his life, don’t you think? 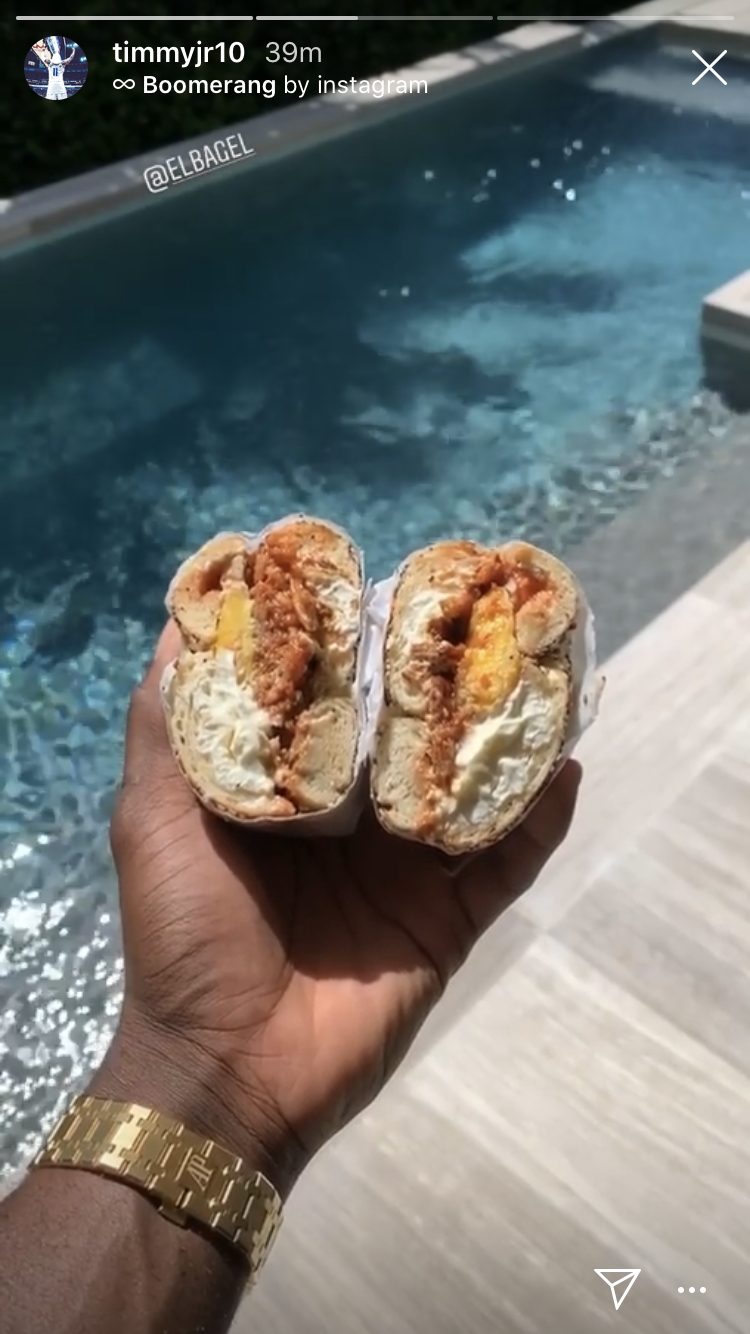 I’ve said it before, I’ll say it ten million more times until you listen to me, but man, does Tim Hardaway Jr. know how to ride out a pandemic. This time, poolside with a loaded bagel made just for him.

Rating: Petition to demote the old, angry, quite short Bagel Boss and replace them with relaxed, quite tall Tim. 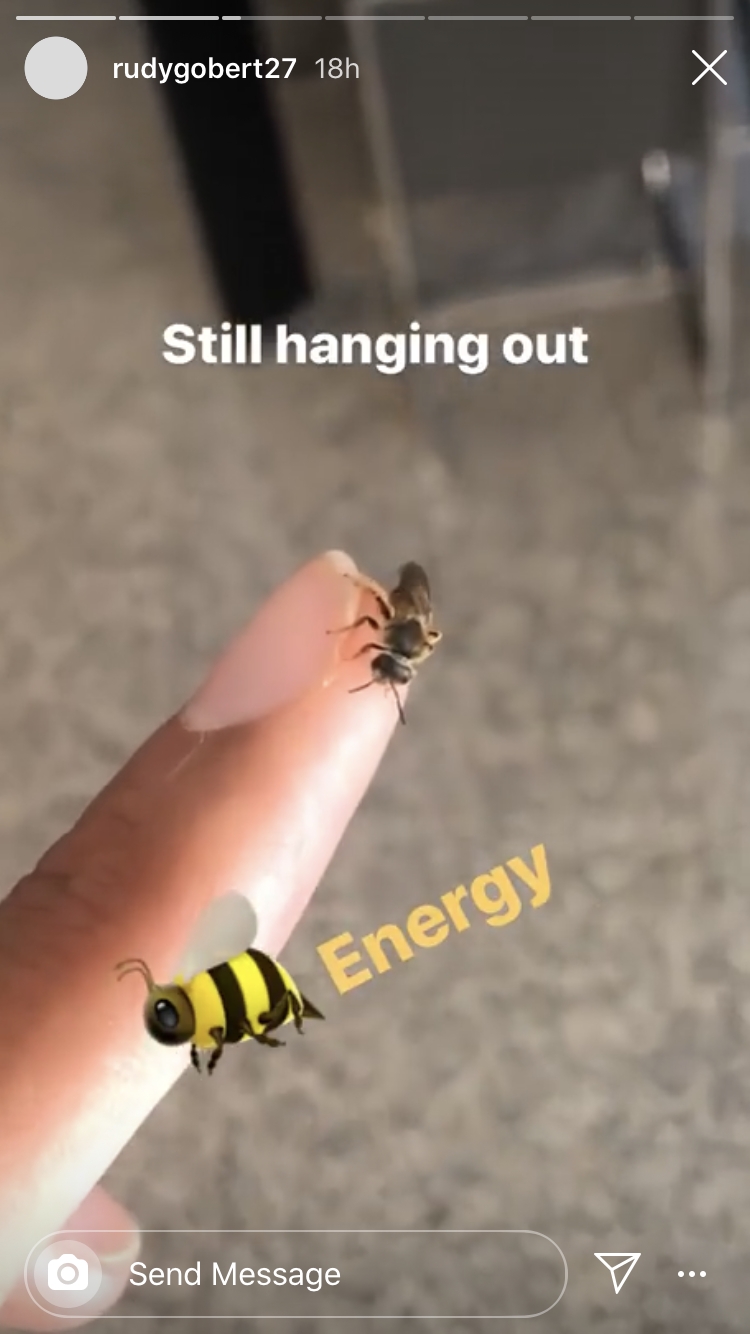 Ever since he went and got the league shut down, Gobert has been facing some warranted criticism and what seems like more than the pandemic-mandated social distancing. Like, he doesn’t seem to have many friends, I mean. This fact was exemplified anew this week when Gobert befriended a tiny bee. We get the sense from his caption that they have already been spending a fair amount of time together when this was recorded, we also get the sense that Gobert is trying to get something called “Bee Energy” off the ground.

Rating: It won’t fly and I have to wonder how long this new friendship lasts before Gobert is told, once again, to buzz off.

Confession: I miss Delon Wright. He was part of Toronto’s inaugural Bench Mob and thrived alongside the once-upstart Raptors now at the core of the team. I’ve watched his career, since he was sent to Memphis and now Dallas, with a lot of hope and a little anxiety. Seeing these photos of Wright atop his convertible in a pink shirt was like finally getting a postcard that’s been lost in the mail…

Rating: …but like one of those ancient portrait photographs on a postcard where people didn’t smile in pictures yet. 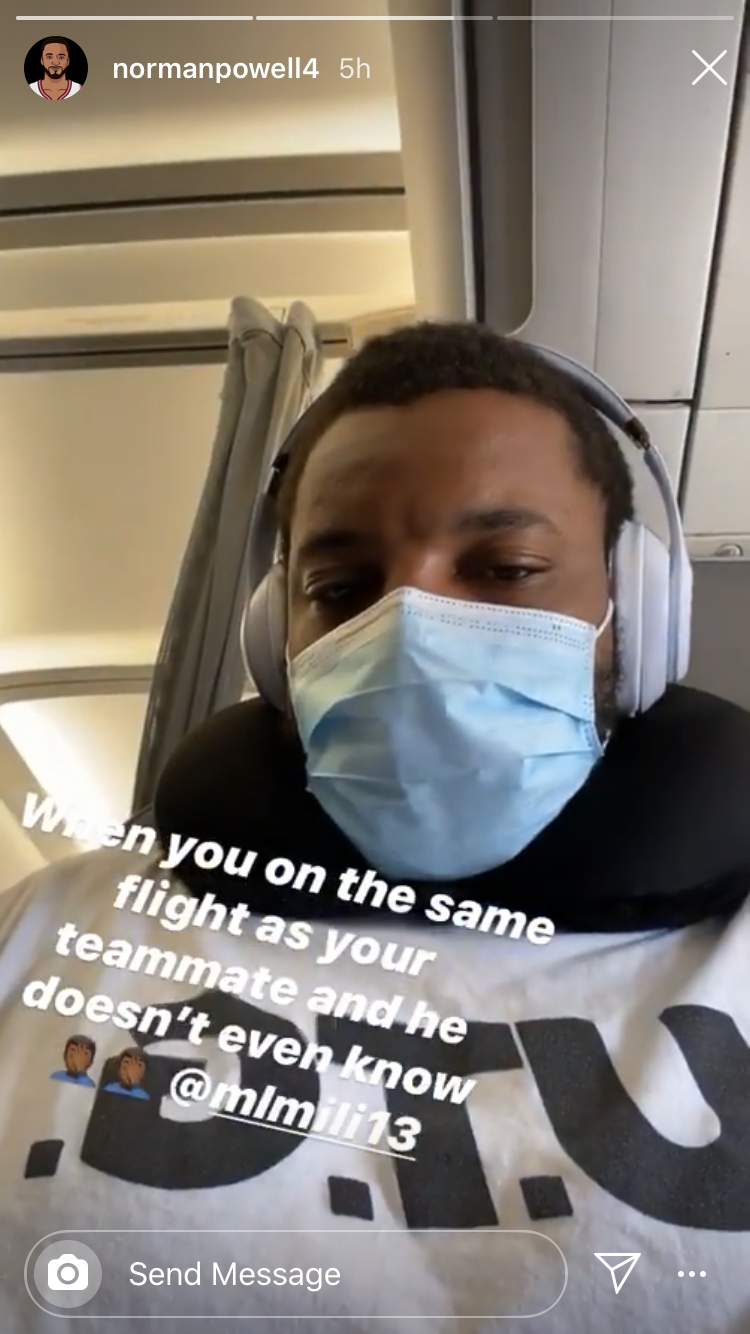 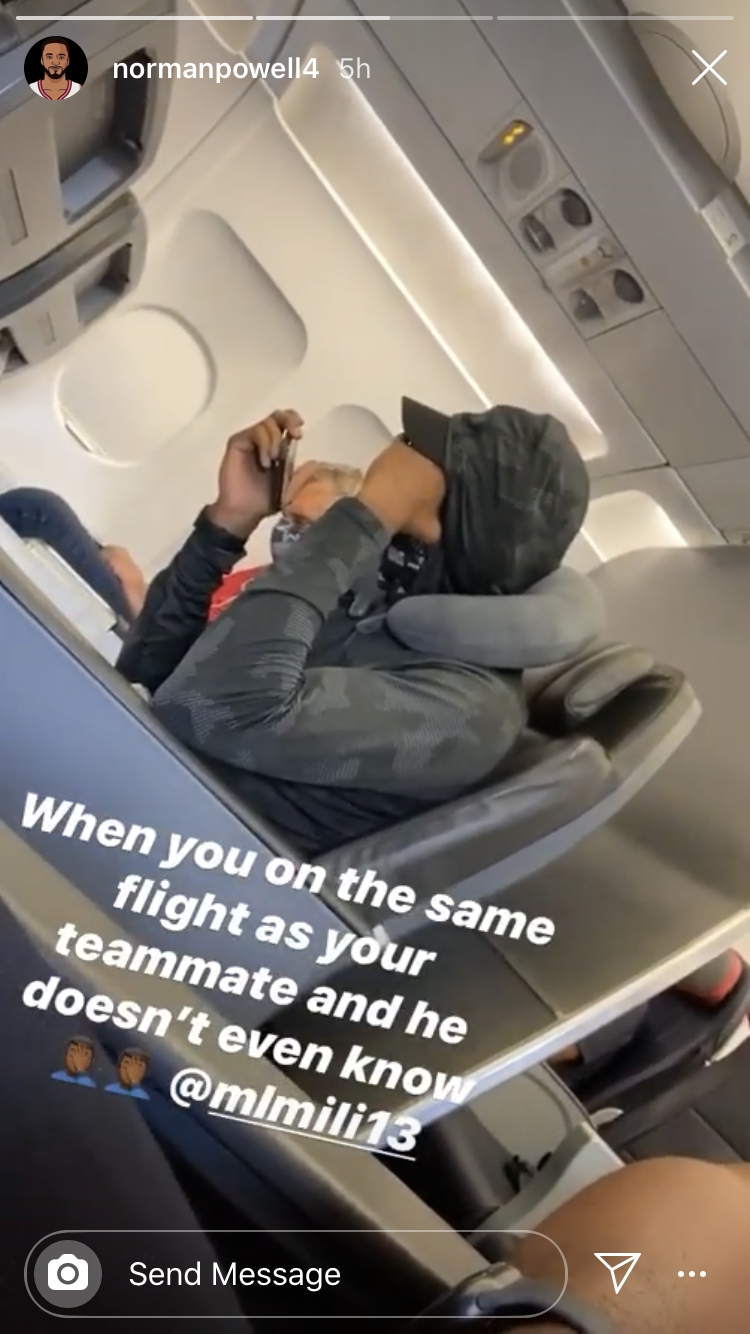 Powell headed to Orlando this week to join the Raptors as the first team entering the bubble and/or “mesh hat.” Partway into his journey, he realized he was seated beside Malcolm Miller, who did not yet recognize Powell. It’s one thing if the mask on Norm’s face confused Miller but the Understand The Grind t-shirt really should have given it away.

Before this flight, just to further break your heart, Miller had to say goodbye to his very cute dog, North. She was bummed out. 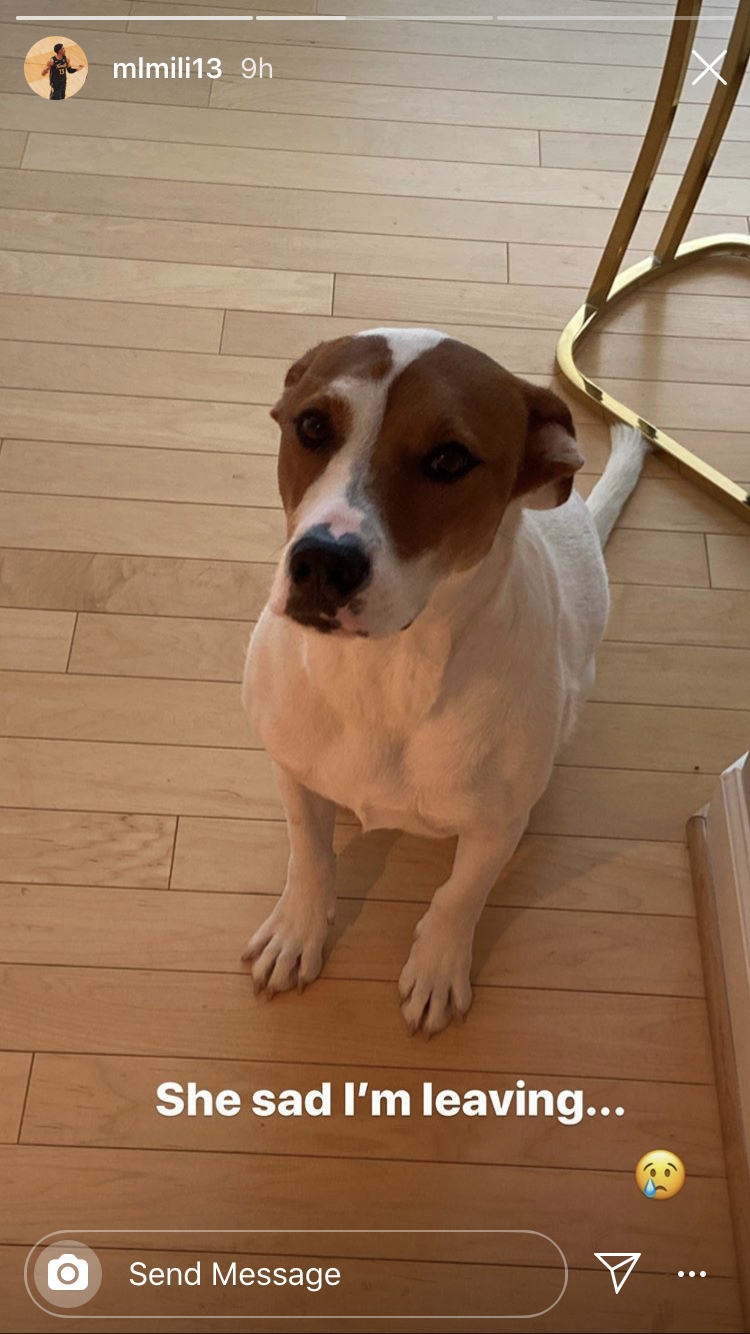 Rating: Proof that it’s not just you, it really has been 80 years since basketball. Championship teammates no longer recognize one another. 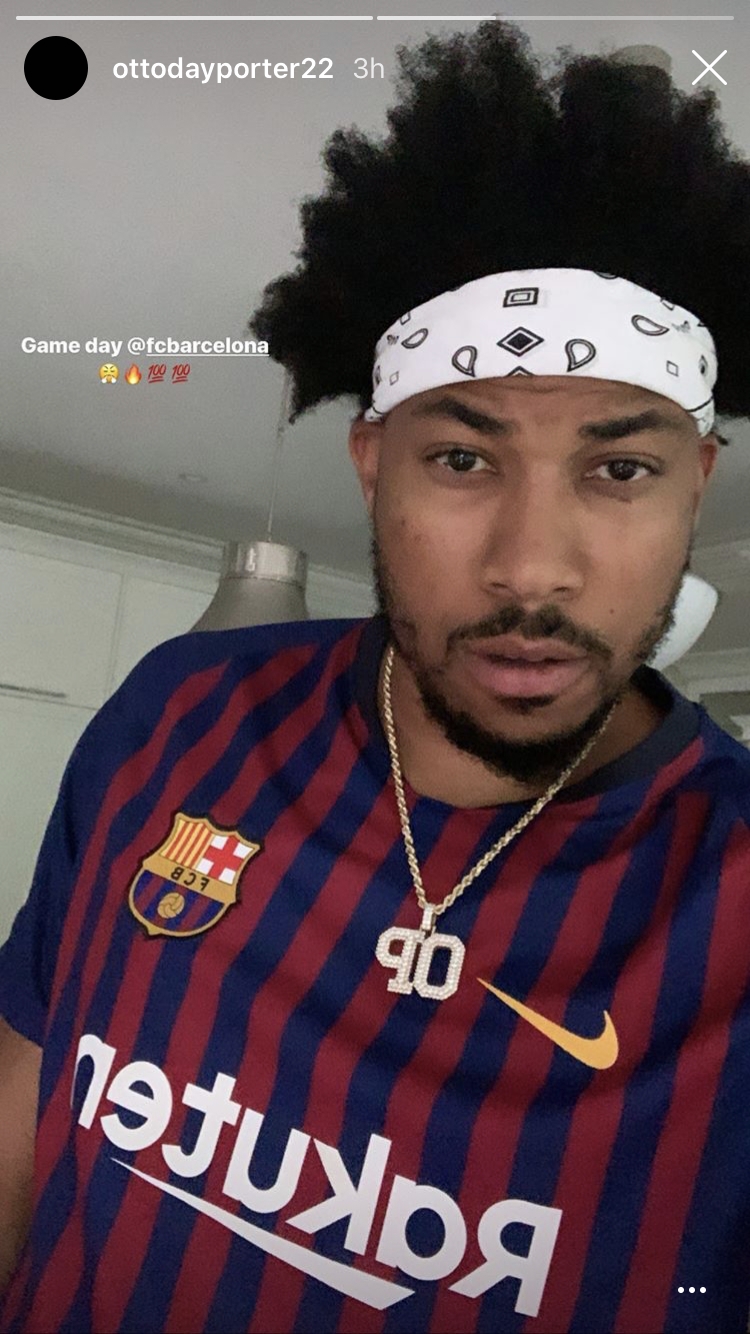 Porter Jr. got up bright and early and put his kit on to watch the match, this week. Do you think he enjoyed a nice jambon and potato bombas? Do you think he pronounces Barcelona with a th every time he cheers?

Rating: Look, this isn’t La Liga Self-Isolation Watch, I do what I can.

After a couple weeks away from destroying his appliances Kanter is up to his freak test kitchen tricks again. I would not consider injecting peanut butter into a ball of cookie dough with a medical-grade syringe “starting slow” for everyone, but trust me, he’s easing back into it here.

Rating: Maybe he finally ran out of waffle irons to wreck. 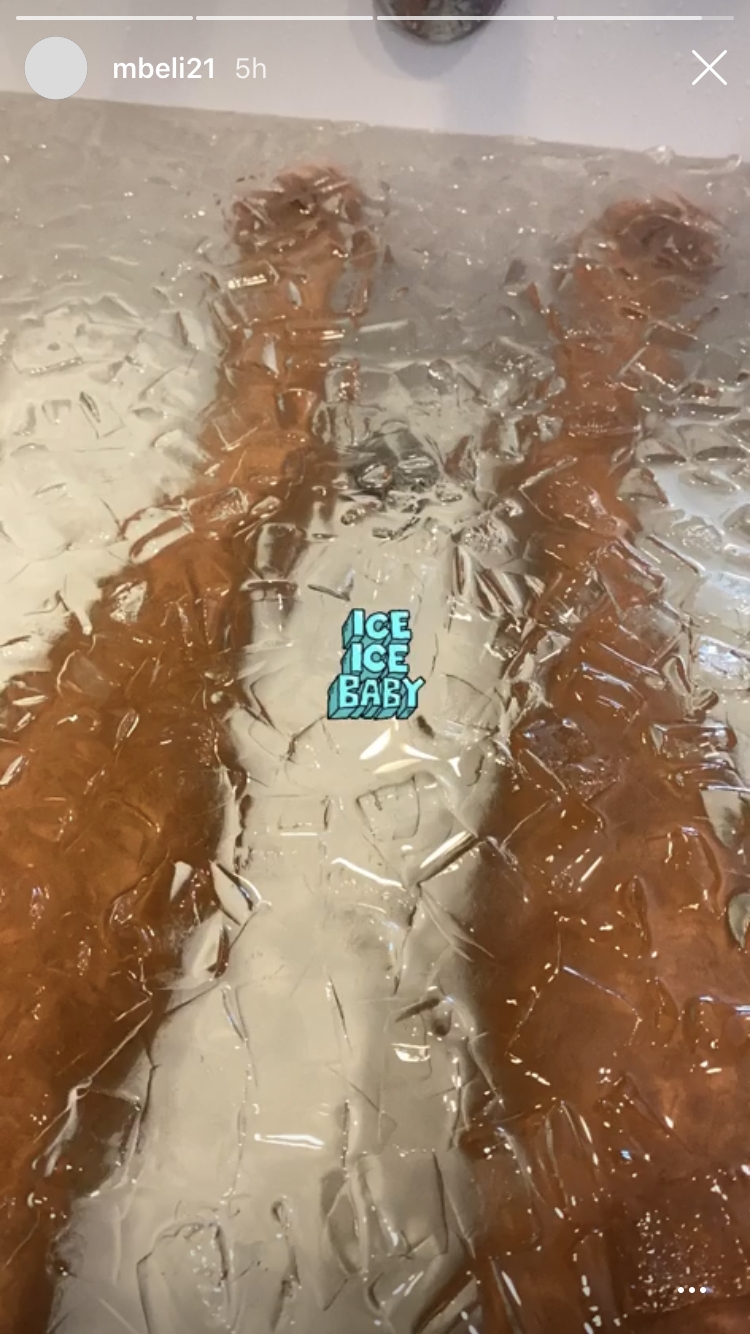 Like the longest day of sunshine signifies the solstice and the official start of summer, Marco Belinelli submerging himself into an ice bath marks the Spurs entering into the preparations for the closing of another just fine season in the western conference.

Rating: Something about Belinelli’s very reliable legs encased in a loose ice bath is very comforting, though.

The Tsunami Papi was seen out and about this week but the thing he wants us to note most closely, by the pointing and the several photo gradual zoom in, is that his sunglasses spell “NO”..

Rating: Contrarian shades, maybe even a sporty wraparound version that says NOPE, here for it. 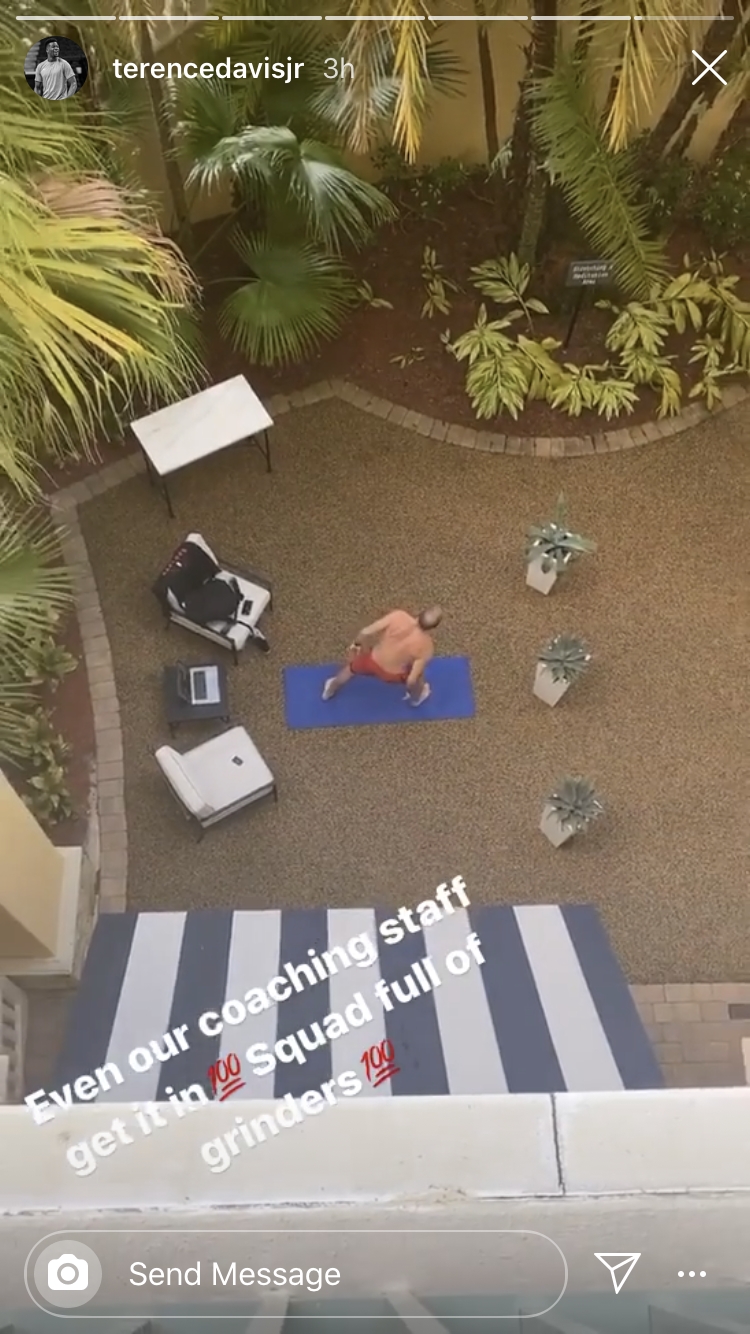 In continuing Raptors-heavy content this week, Davis did a friendly spy sesh from his balcony upon arrival in Florida. He peered birdseye down at assistant coach Jim Sann (thanks to prominent Raptors insider, Blake Murphy, for the help on positive ID via top of head shape), doing some stretches, who eventually sensed he was being watched and looked up to be cheered on by Davis. This team is full of angels and if anything happens to them, I can’t even let myself go there. 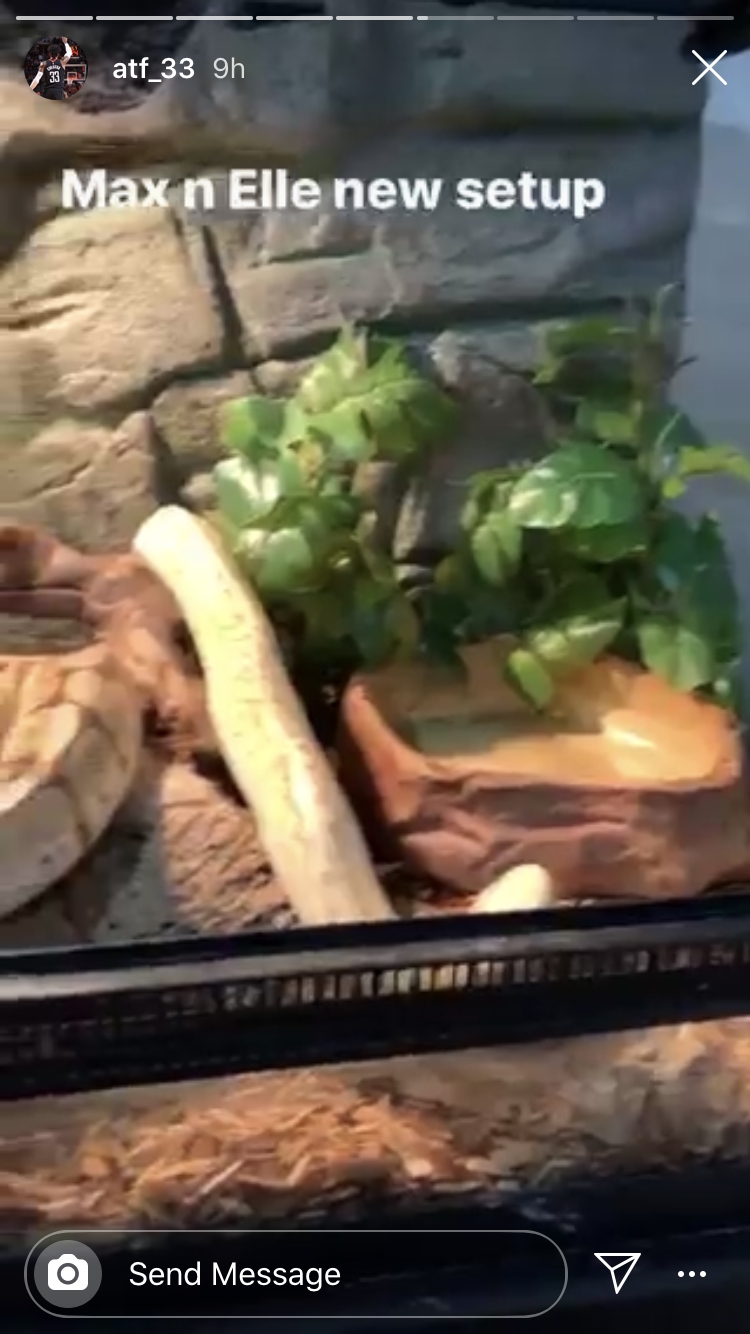 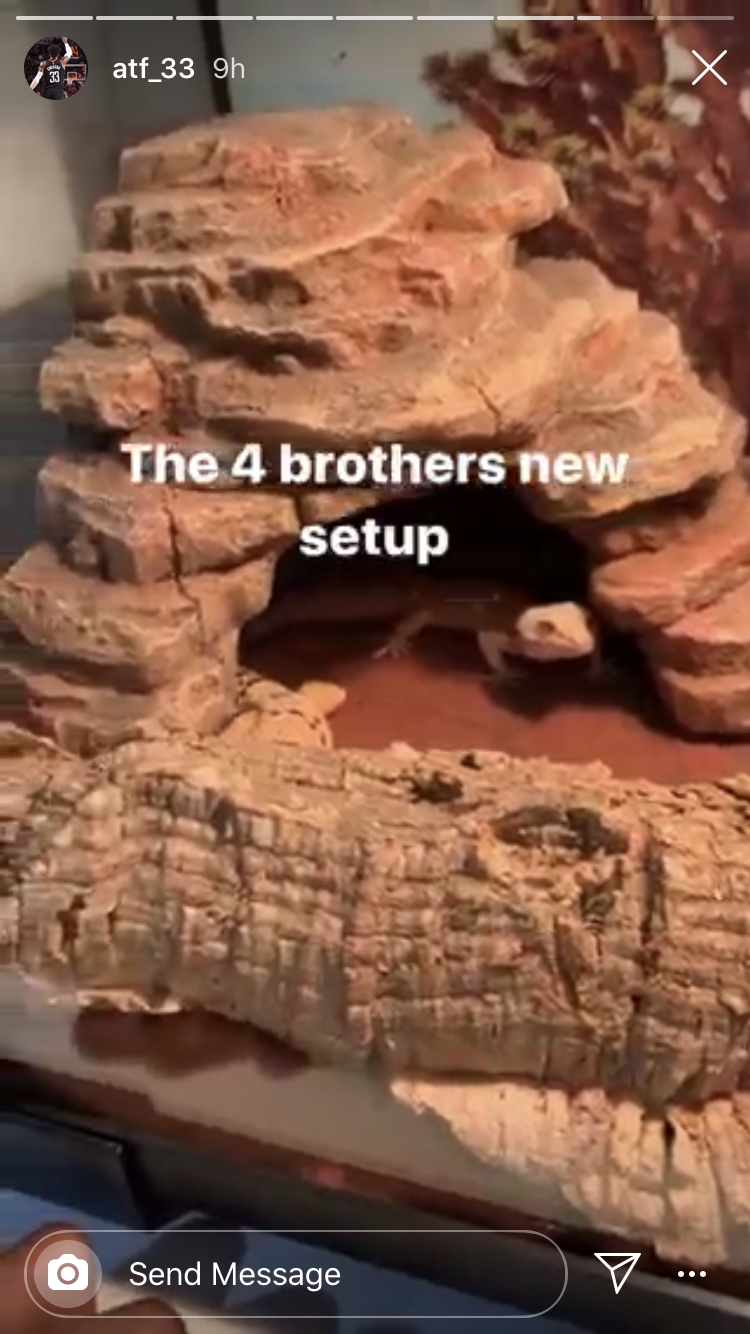 Excuse the blurry capture but reptiles in repose are difficult to display. Covington showed off the new digs for his two pet pythons, Max and Elle, as well as for his geckos? Medium sized lizards? The “4 brothers.” If cold-blooded creatures can be happy, then these ones are stoked.

Rating: Or should I say, sssssstoked. 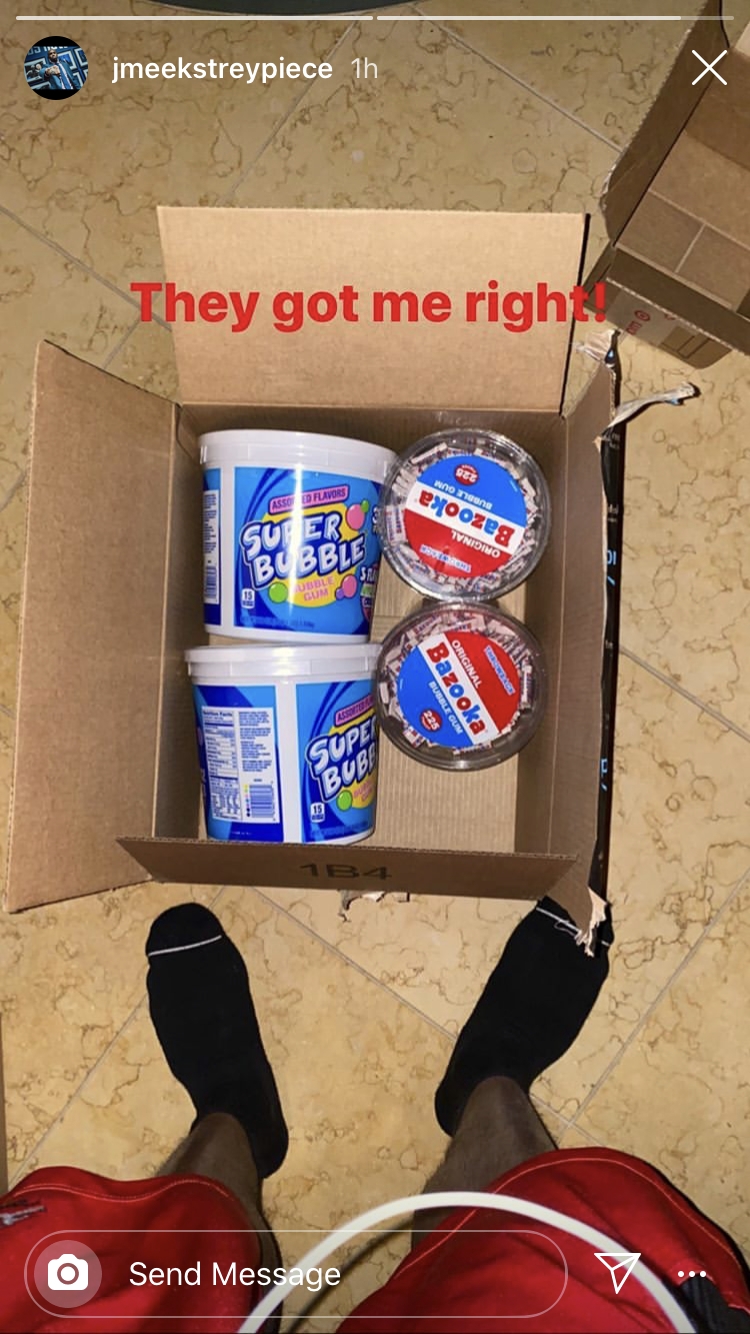 Meeks had a good mail day this week.

Rating: Champs deserve all the bubble gum they want! 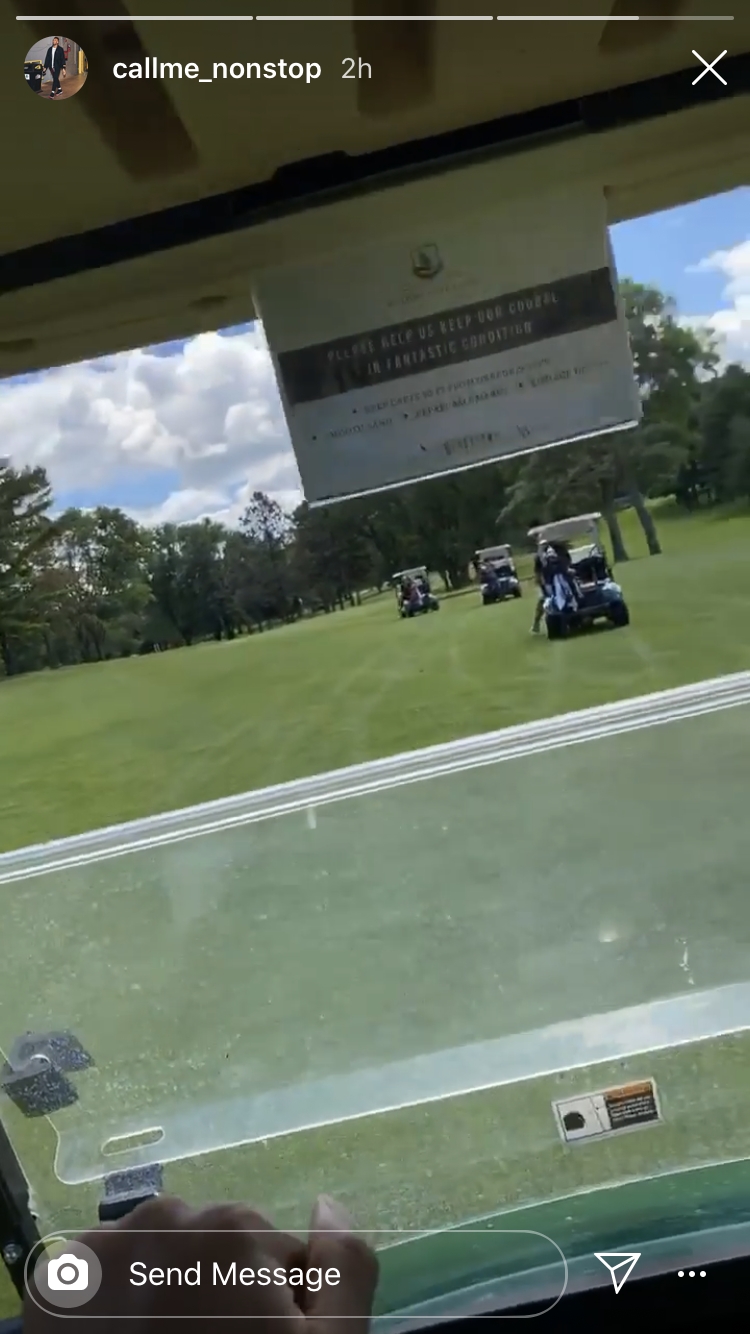 Okogie took to the links this week in a great big little convoy of golf carts really ripping around. His summer vacation begins somewhat abruptly now and I hope he enjoys himself.

Rating: How fast can your standard golf cart typically go? This is a question for Dime Deputy Editor and resident benevolent golf expert, Robby Kalland. 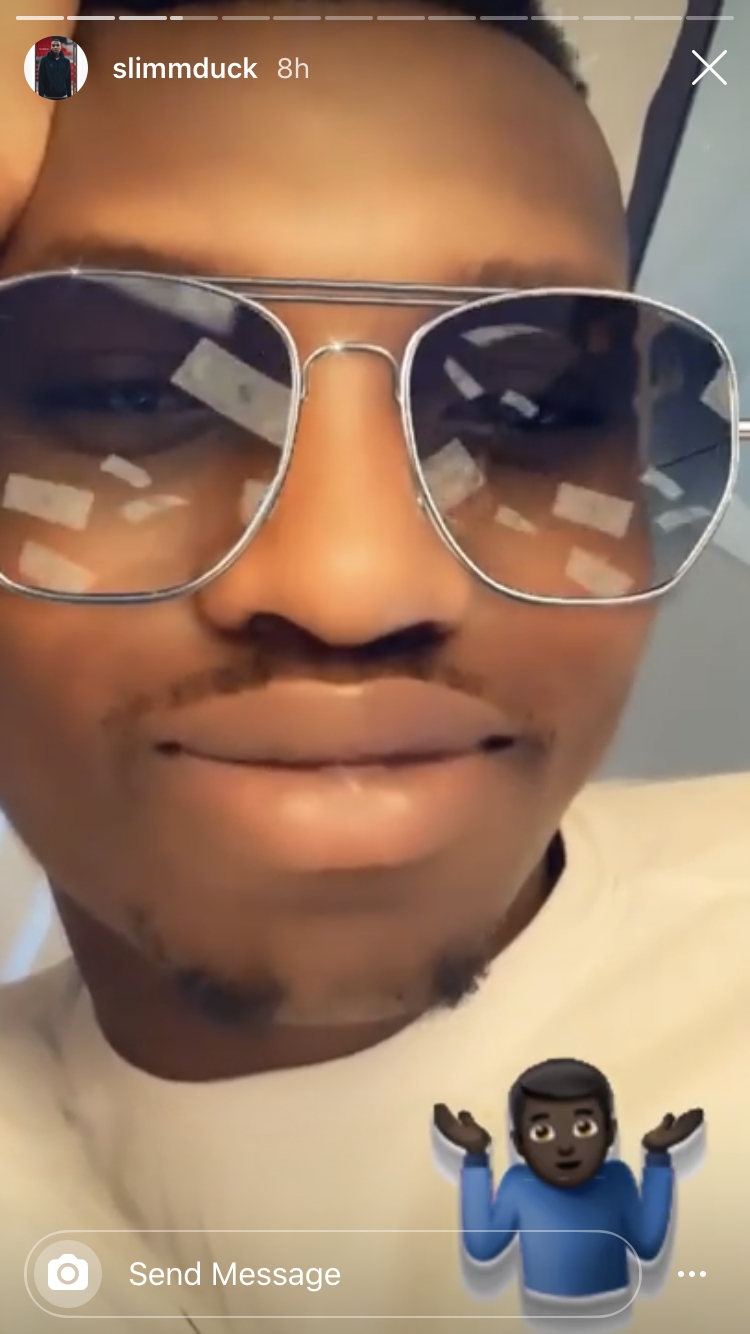 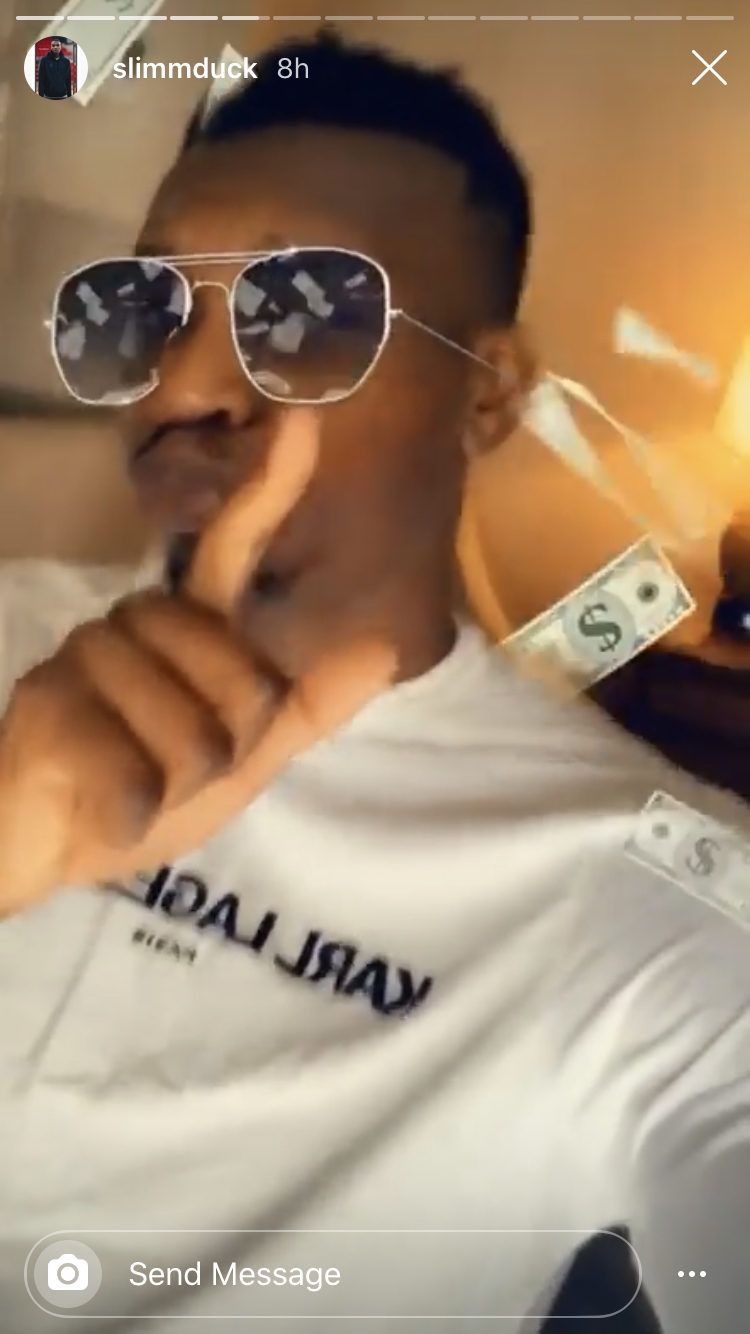 Boucher is in Florida and already having a good time, indoors, thank god. He tested out a few Instagram filters before he settled on this one, which he really liked, because he recorded three videos simultaneously, his dancing growing more unrestrained by the second.

Rating: Keep this energy and self-containment please Chris, no sneaking out to go to the grocery store this time.