NBA Self-Isolation Watch Week 1: Getting The Band Back Together

Greetings, my fellow global citizens of basketball. I’m probably not going to be the first to tell you, but we’re going through some unprecedented times. A week ago, you probably wouldn’t have been able to easily draw a line between the NBA and a pandemic but now, the two are going to be forever tied when it comes to COVID-19. Sorry, is your pulse getting jumpy? I promise I’m getting to something here meant to do a small measure of soothing.

Is basketball important now, in the grand scheme? Not really. Is it ok to still want to keep up with it, even with much bigger things opting for our energy and attention? Absolutely. In the best of times, basketball is an outlet, a social generator, a stress relief valve, an emotional connector, a source of entertainment and, occasionally, a form of art. In the worst of times we want to look to it for these things too. The way COVID-19 intertwined with the league may have started a little earlier than it did for the rest of us, but we’re all in the same strange boat now. Like us, players are practicing social distancing, self isolation measures or self quarantines, depending on where they are and how they’ve been affected, and like us, they are all reacting in real time to what that means and how it feels.

A little bit of background: for three summers now, I’ve had a weekly column called NBA Summer Vacation Watch that chronicles the summer vacations of players in the off-season and ranks them arbitrarily. There are loose rules like, working out on the beach, no matter how beautiful, does not count as a vacation. That’s actually the only real rule. This season, while in a state of suspension, isn’t over yet, so this isn’t going to be set up exactly the same. What this is going to be is a weekly, gentle chronicling of what players are getting up to in their varied states of isolation, what isolation trends are going around to pass the time, who is taking it well and who is taking it less well, with the understanding that there’s not really a bad way to take all this. We could all use the levity, the acknowledgement of overall strangeness, plus it is nice to check in on people. Please, join me.

This ladies and gentlemen is why we all need basketball back… @Giannis_An34 🎸😂 pic.twitter.com/9F4aJIOIiW

A few real keeners out there have been clamoring that in times of great human crisis, the resulting art has been just bangin’. While I was fairly skeptical on the timeline, like it would at least take a little while to get COVID-19’s version of King Lear, here came the Greek Freak laying down his interpretation of perhaps the greatest riff of our time — the opening cords of “Smoke on the Water” by Deep Purple. Along with new art we also got a strong contender for a powerful new PSA: Stay in and shred.

Rating: One hundred thousand times better than self isolating celebrities singing “Imagine”, and in a fraction of the time.

I’m also free and available for any group in need of a guitarist. In box me for booking 😂😂@Giannis_An34 pic.twitter.com/ehyVy29FLd

Readers of NBA Summer Vacation Watch (NBA SVW) are familiar with Mills, who is a reigning SVW MVP and just an overall skilled participant in the off season. Is it any surprise, then, that Mills has decided to step up during these difficult times and remind us not only his summer vibes but his musical talents?

Rating: The rhythm may still get you in self isolation.

Brahms, Liszt, Chopin, all of them could tickle the ivories in ways that might destabilize an ancient colonial power by making the wrong Duke go for somebody else’s Duchess, but they couldn’t hoop for shit and thereby pale in comparison to the Canadian virtuoso, Jamal Murray. Murray has been polishing the keys at home while in isolation and lucky for all of us, he’s taking requests.

Rating: Nobody asked for a quarantine basketball band but congratulations, we’ve got one.

Roll over Beethoven, because JaVale McGee is in the studio and is about to chop and screw your ass.

Rating: Nobody asked for a remix of the first track that the quarantine basketball band drops but congratulations, we’re going to have several.

Elite athletes, they’re just like us and stress eating through their emergency stores! Kanter has been spending extra time in the kitchen this pandemic, offering cooking tutorials while holding, inexplicably and adorably, a tiny little kitten.

Rating: In all sincerity, this is a time when the NBA, along with the rest of us, should do our utmost to stay soft.

You might say that self ISO has the king of ISO himself thirsting for something, but in this case it should be more easily solved then when James needs to take matters into his own hands on court. In this case, he just wants a friend to drink wine with! Surely, Dwyane Wade cellars, and DWade himself, can’t be that far away? Like I am surprised there isn’t some kind of underground tunnel linking the two properties already?

Rating: As NBA Self Isolation watch evolves so too will LeBron’s quest for a friend (and more wine naps).

The inspiration to turn to music in times of social distancing continues, now in the dulcet tones of Akon as interpreted by the Hawk’s small forward, DeAndre Bembry. This is almost verging into theatrical art, and I would not be surprised if we have some crossovers — off court, artistic in nature — soon.

Lockdown is more or less business as usual for Butler, who spent his first few days of social distancing working out in his tropical backyard without the distractions of teammates who might rather be gaming, say. But his routine took a turn when Goran Dragic came over to kick a soccer ball around. Did Dragic go on to do an NBA PSA after this about staying home? Yes. Was he home at the time of this filming? No. But we are all imperfect beings trying to do our best.

Rating: Breathe a sign of relief because Jimmy will probably go back to working out alone after Dragic insisted on showing off like this.

Young put on his All-Star jersey, which is sort of enough to break your heart already, and lined up a whole bunch of balled up socks like he was in the three-point contest. More beautiful, crushing things include: Young’s little hops as he gets lined up for each toss, the follow through of his shooting arm, the genuine disappointment when he (spoiler alert) misses one sock, and the way he points up toward an invisible jumbotron after he clears out the “money ball” sock rack.

Rating: Basketball is beautiful, even when it doesn’t presently exist.

The Raptors big man has been handling his 14 day quarantine with the rigour and discipline you’d expect from a man who does art, in all things. Ibaka has released a short video every day thus far giving a diligent glimpse into how he’s spending his time as well as a spin-off to his hit show, “How Hungry Are You?” with “How Bored Are You?” — a hero!

Rating: If you haven’t yet experienced how soothing it can be watching a 7ft man load a dishwasher, please.

Kuz demonstrates how you can still stay active while keeping a respectful social distance. It’s not clear whether he actually rode the bike, but that was probably for the best considering the Lakers moved into official quarantine protocol after this was taken.

Rating: It might feel like you’ve forgotten how to ride a bike after all this is through but remember, you never do. 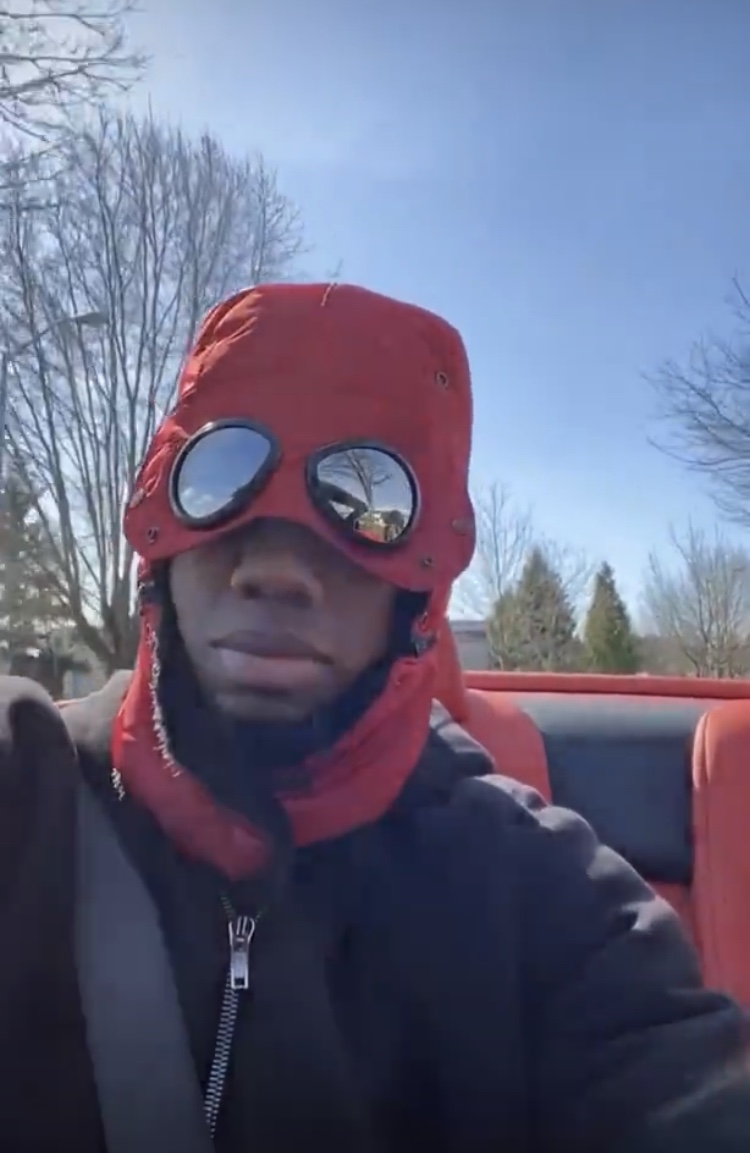 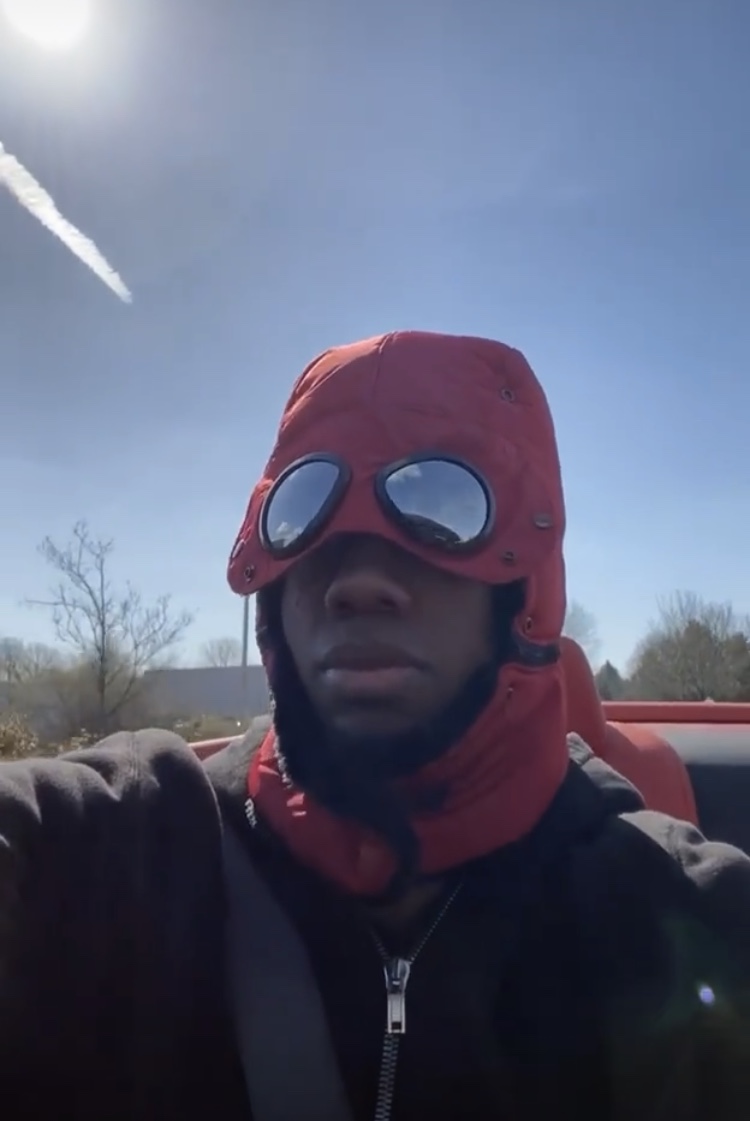 An act in three parts: Whiteside, feeling cooped up, likened himself to that famous, also cooped up horse, staring longingly out at the world. Whiteside emerges, in a convertible with its top down and a driving hat apparatus on that serves to maybe also pay tribute to Donovan Mitchell, first in the league to test positive for COVID-19 and go on lockdown (he’s fine!) I would feel better if this thing had a mask but you figure you want to feel the wind and the sun somewhere, if not in your hair, right?

Rating: Hopefully he just did a couple loops around the block and didn’t actually get out of the car. 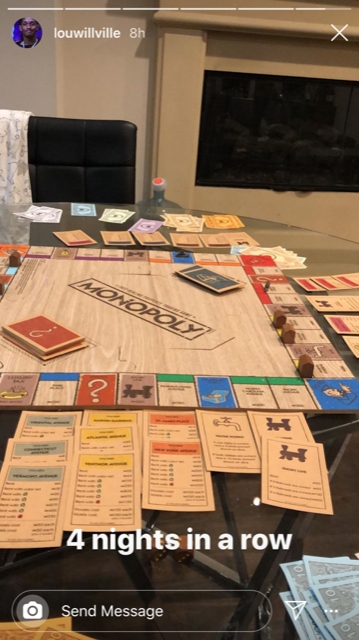 Lou’s been playing some board games. 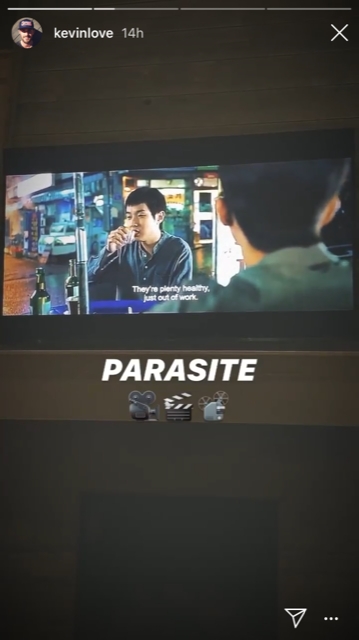 Kevin’s been watching some movies.

Rating: Very good choice of still to capture, maybe too on the nose. 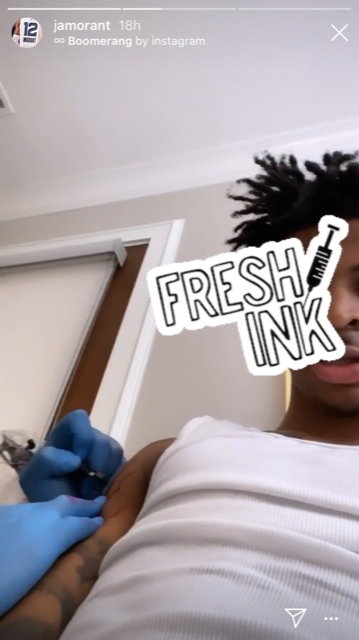 Ja had someone swing by to give him an in-house tattoo. 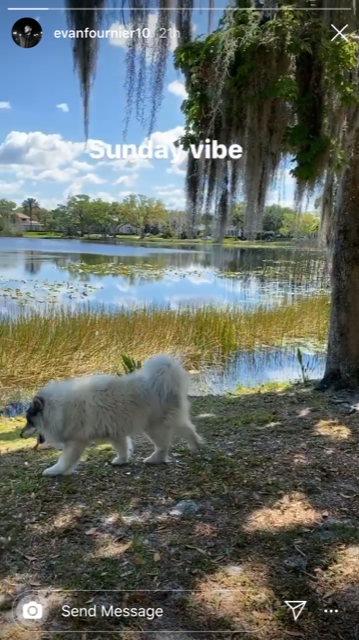 Evan took a nice, leisurely walk around a picturesque swamp.

Rating: Stretch your legs but if you can, do it in a place with less gators. Nobody needs any extra stress right now. 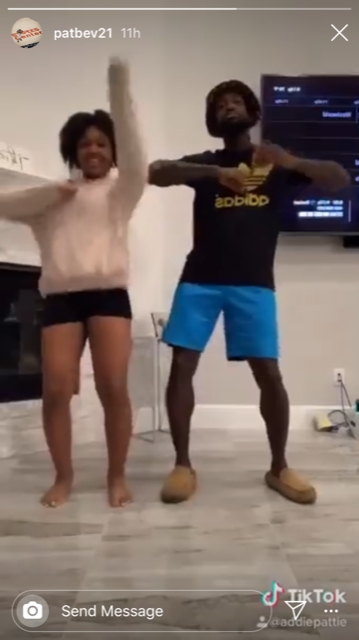 Pat did some indoor dancing with a very strong look. Bucket hat, comfortable slippers, electric blue shorts, there’s no reason to throw sartorial sense out the window just yet. 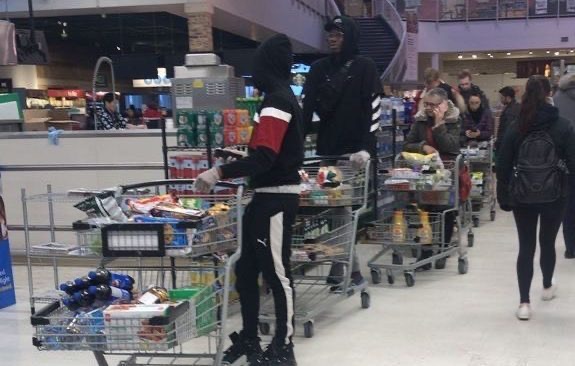 Boucher busted out of the Raptors 14 day quarantine to take a trip to a Toronto grocery store chain called Loblaws. Surely, it must be a well-stocked paradise if such a thrill, a momentary lapse in judgement was worth it, is probably what you’re asking. I’m afraid to tell you no, Loblaws sucks and is never worth endangering yourself or others for, but hopefully this was the last big rush the Slim Duck needed before hunkering down.

Rating: I’m not sure a Dr. Oetker is the medical professional anybody should be endangering themselves to see, right now. 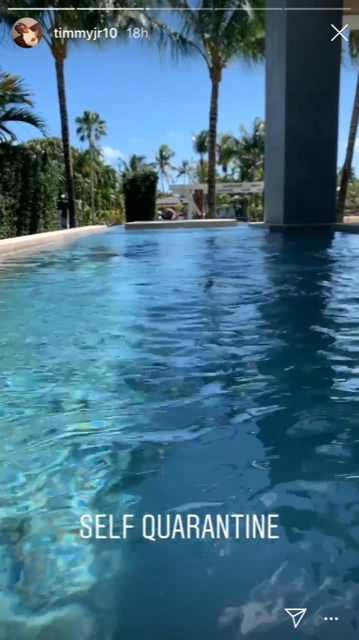 Rating: This technically could count as early NBA SVW and NBA Self Isolation Watch crossover content but I’m still holding out for a traditional offseason in these trying times. 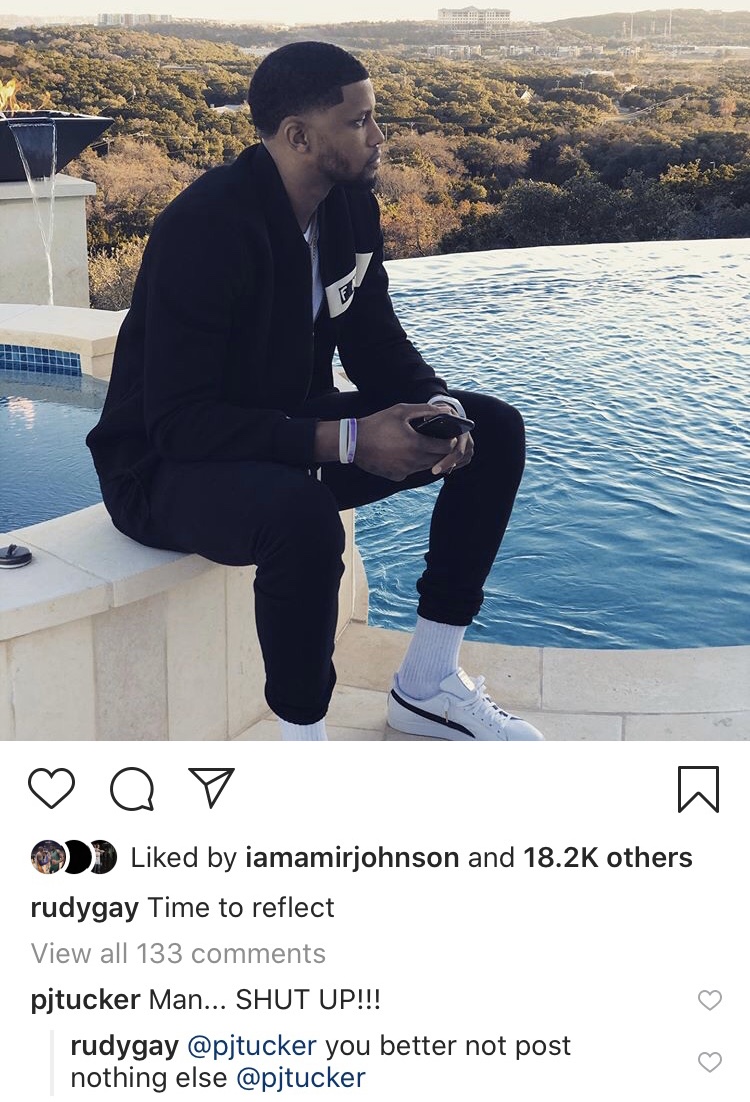 Rudy is right, but so is P.J. Tucker in the comments, playing the role of that one friend we should all be checking in with to set us straight when self-isolating gets a little too inward.

Rating: Frankly as long as P.J. Tucker isn’t worried neither am I. 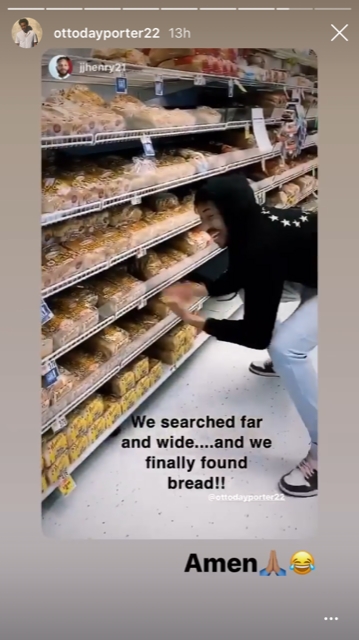 Otto Porter Jr. and his friend demonstrated the weird and wild state of things and also demonstrated the appropriate attitude to take when navigating them. Supply chains are sorting themselves out but in the meantime be nice, also it’s fine to feel like you overcame great odds just in finding a load of bread right now.

Okay, I really hope this doesn’t turn into a Marie Antoinette “Let them eat cake” kind of thing, but, a few players all did this challenge with each other where they kicked a roll of toilet paper around like a soccer ball. Larry Nance Jr.’s dog intercepted his, and I think Boban kicked his in the pool, but Bam Adebayo kept a great handle. I both hope this lasts but also that the toilet paper supply picks back up so this isn’t turned into an essay on privilege and excess. 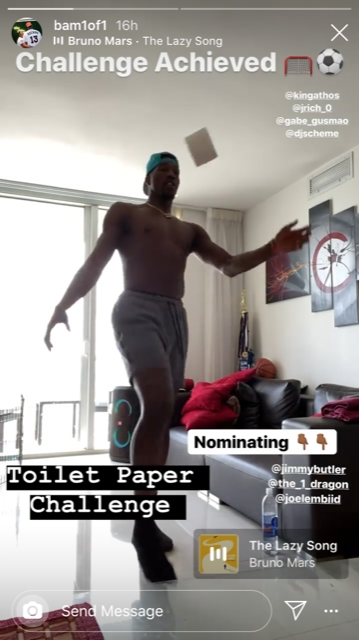 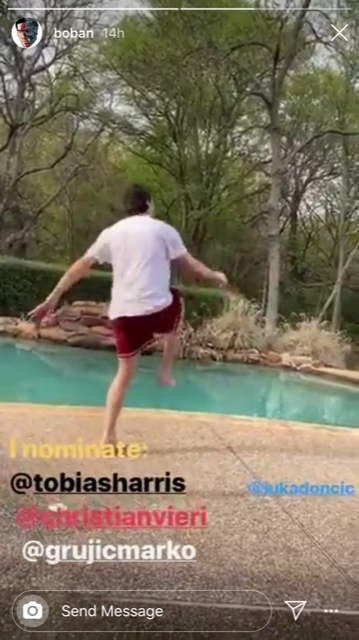 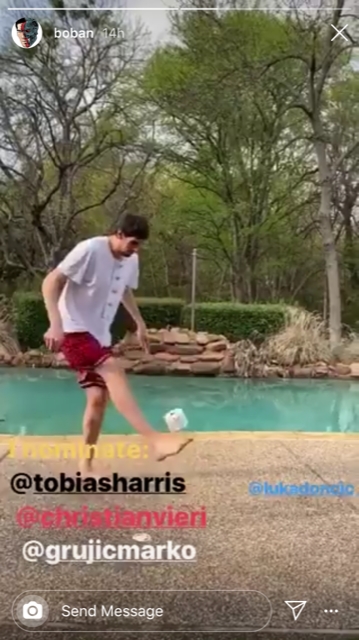 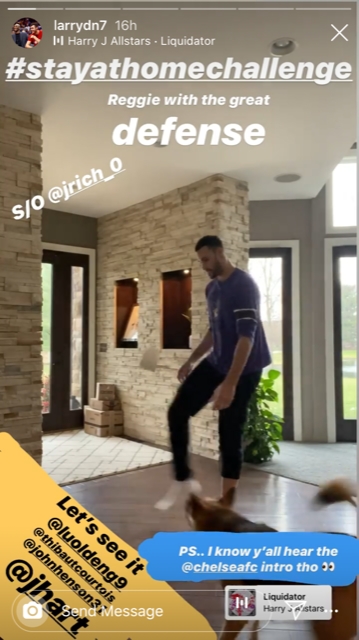