Pull up a dang chair cause we’re still going strong here, wobbling very capably along the tightrope between NBA self-isolation and NBA semi-isolation in the big Orlando bubble, aka Bummer League.

This week featured heavy on activities — team focused but not necessarily mandated, like covering Lou Williams in long range paint projectiles. Plus the first team to arrive in Florida, the Toronto Raptors, hitting the green, the tennis court, and the homesickness pretty hard. There were also some birthdays! Isolation is both over and not over? Slowly shifting into the bubble, conjoining to make another, bigger bubble than just the concentric bubbles of physical distancing? You know we love to get metaphysical here. 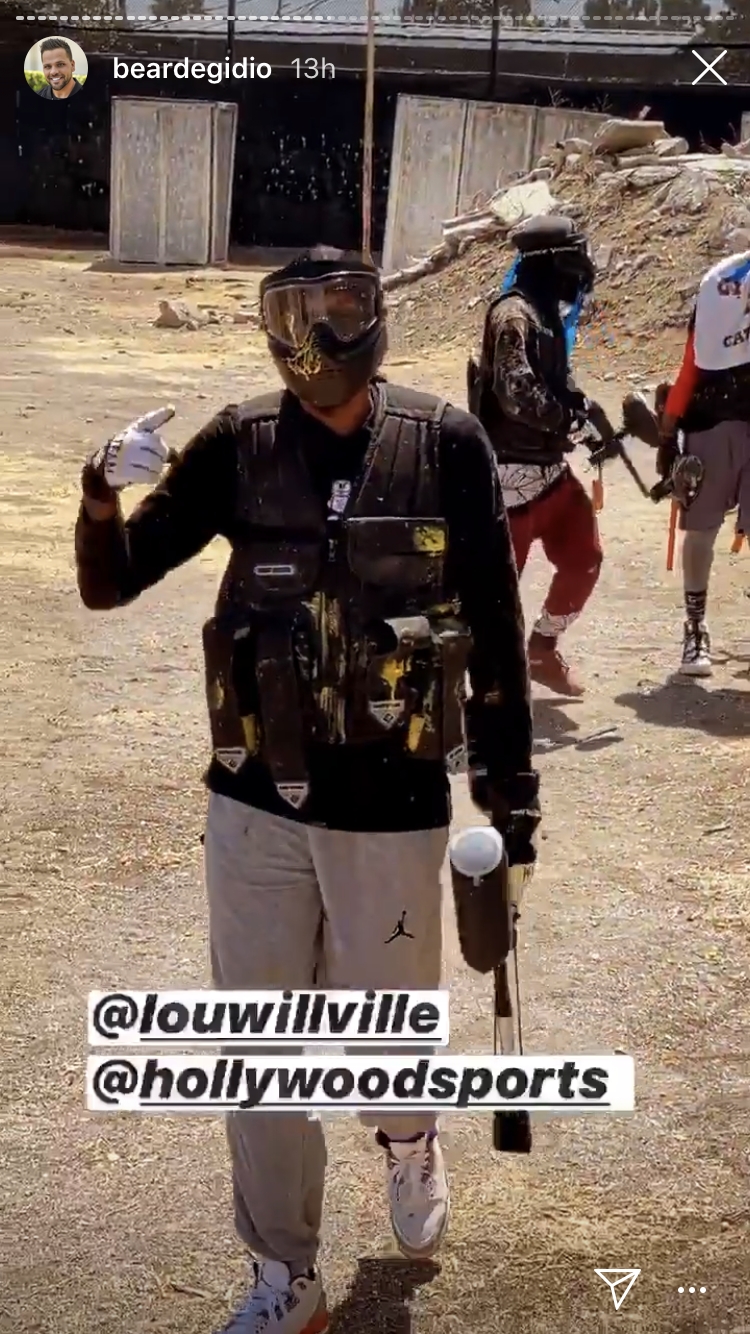 You gotta hand it to paintball, the pastime, for emerging as the preeminent safe team-building pandemic activity given that you can be both locked with the rush of nailing people you care about with small pellets of paint and loaded with PPE. Paul George, Patrick Beverley, and Lou Williams hit the dusty battleground? Arena? Why are these spaces always so post-apocalyptic or bust? Anyway, they spent a rollicking afternoon at a high velocity Color Me Mine and Beverley didn’t even cover his arms up.

Rating: The Clippers hang out a lot, they had that deep-sea fishing day trip back before the season started in September, and if you want to look at teams that are going to be problems I think an advanced stat you should be looking at is FRIENDSHIP. Thanks! 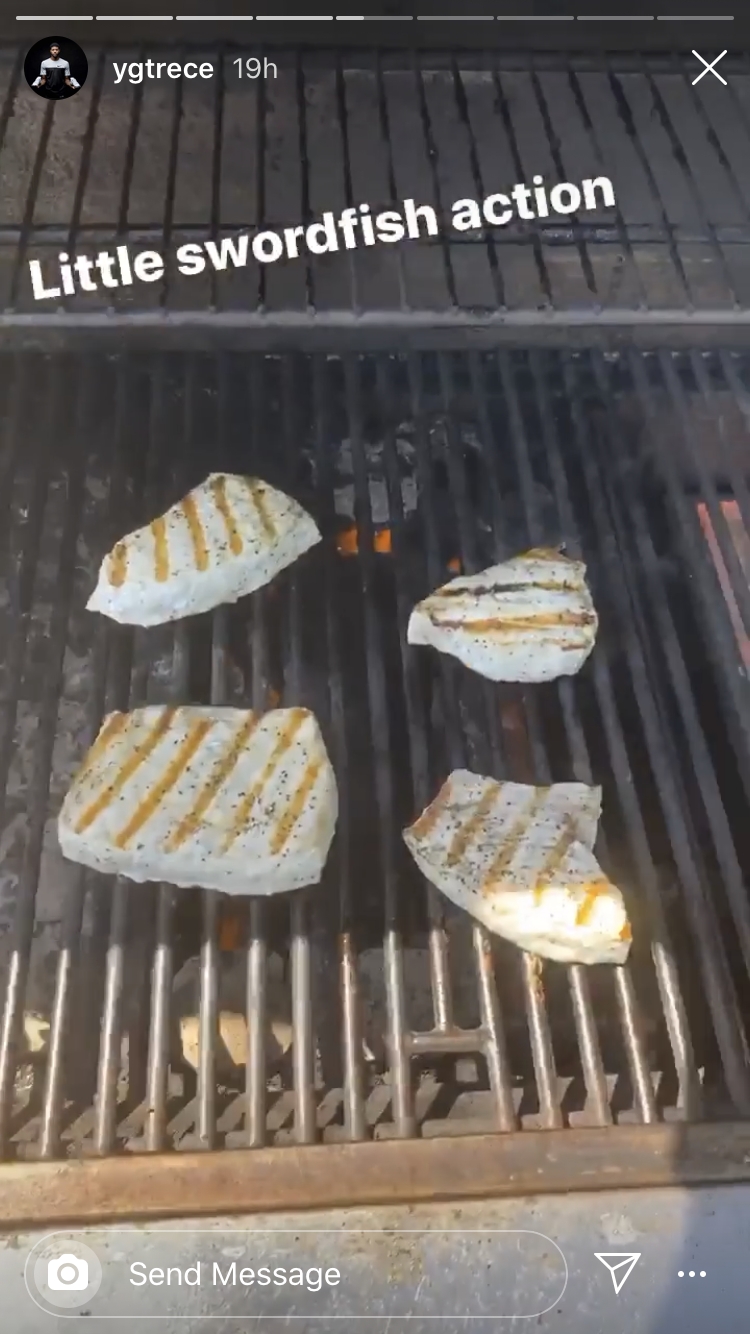 George kept it cooking this week post-paintball, this time with a “little swordfish action.” He was panning all over the place here, pretty excited for a few nice pieces of fish.

Rating: No idea if he caught the fish these are from himself, or merely hooked them at his local fishmonger. Support local businesses. Thanks! 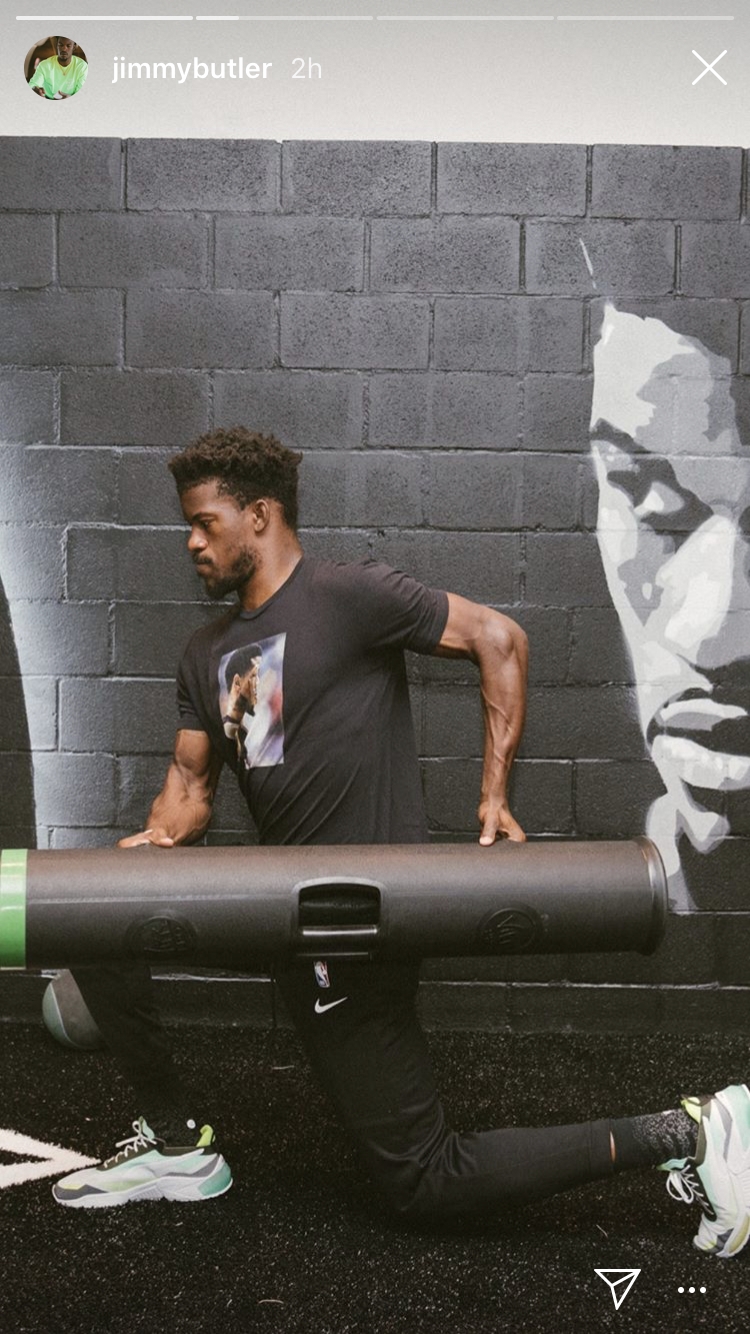 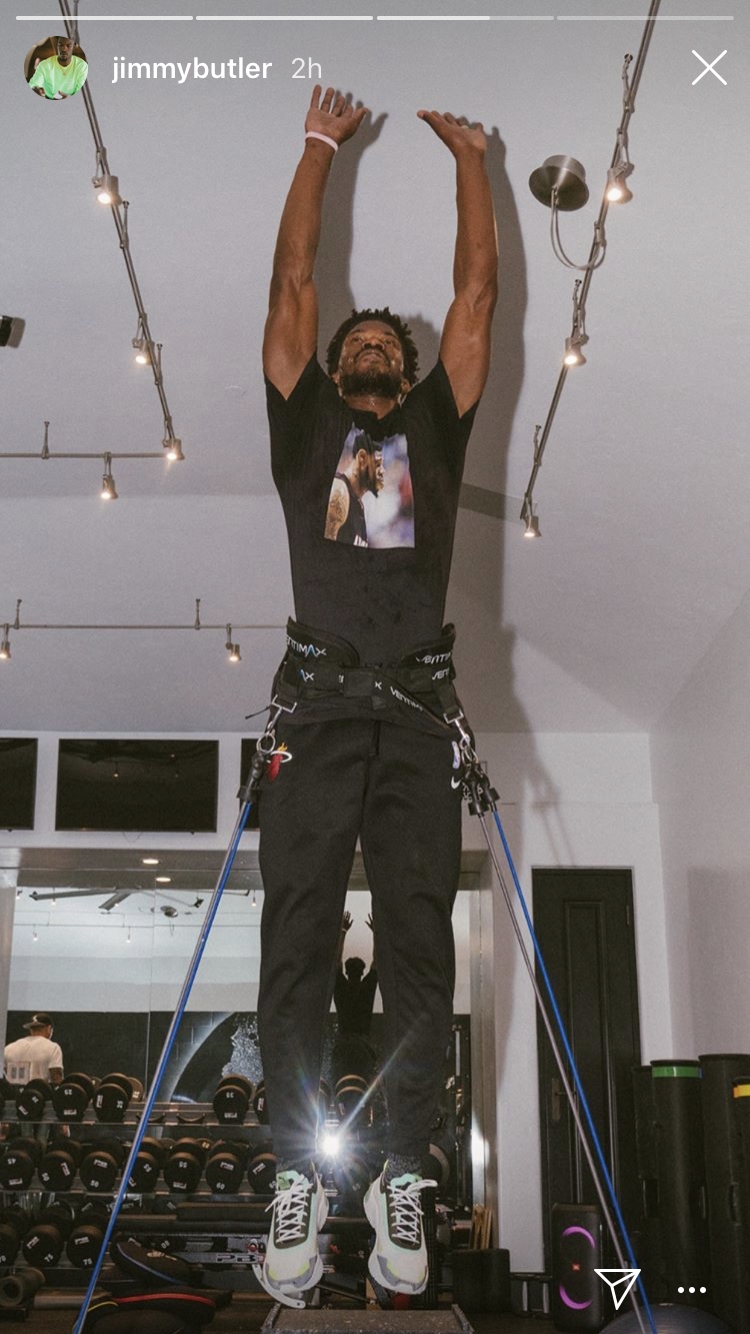 Sometimes when you’re working out — or maybe not even working out, maybe just performing a routine task that needs to get finished, like rounding up another week of NBA Self-Isolation Watch when it seems like the week prior just melted into this one (???) — you might want to stop for a minute, catch your breath, or shift your attention elsewhere. In those lapses, it would be helpful to have a stern, monochromatic mural of Jimmy Butler just over your shoulder, urging you on. Jimmy Butler has one of those murals. But the difference is that Jimmy Butler is the one that turns around and tells his mural its slacking off.

Rating: Another incredible achievement for Jimmy Butler here this week, he’s thwarted gravity once and for all. His trainer had to in fact tether him to the floor to keep him from blasting up through the ceiling. 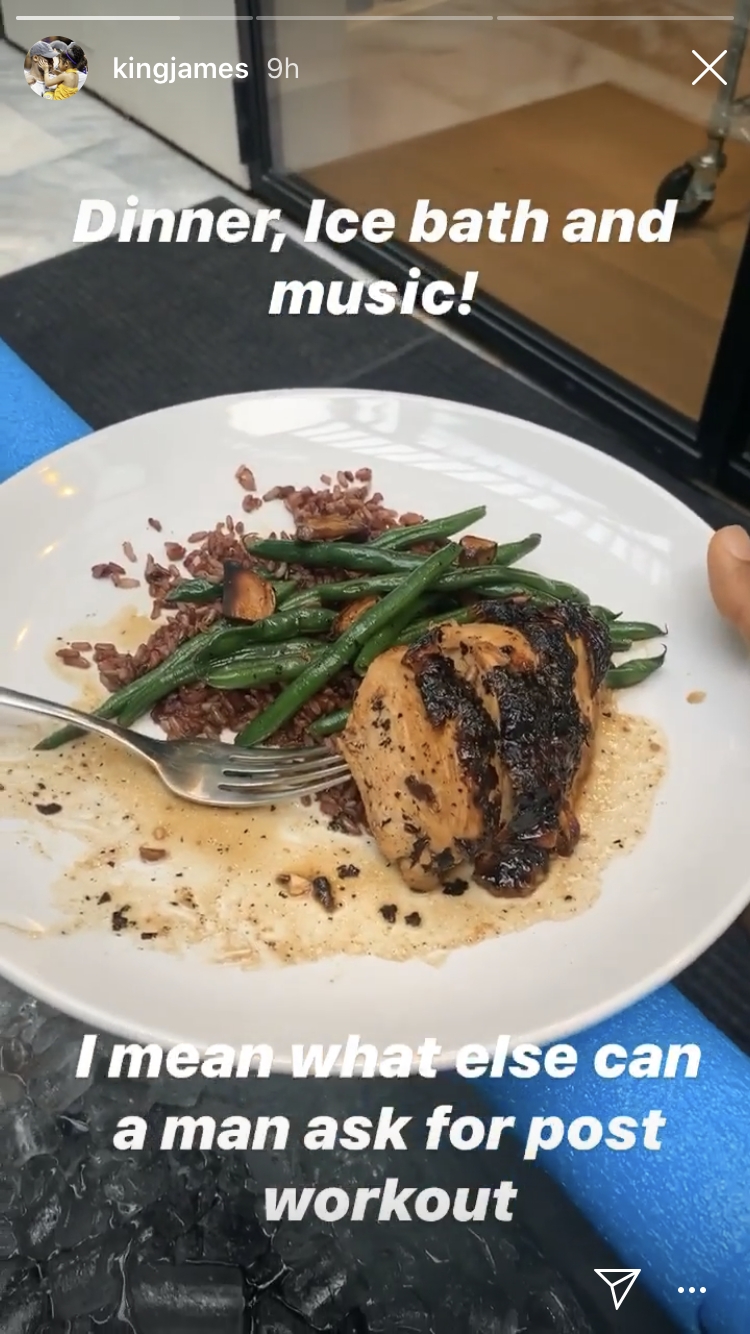 Let it never be said that LeBron James doesn’t know how to relax and have a little fun! This week he balanced his balanced meal on the lip of his ice bath and showed up to the Lakers practice facility at the crack of dawn before anyone, even the people who hose down the basketballs in Lysol, got there. 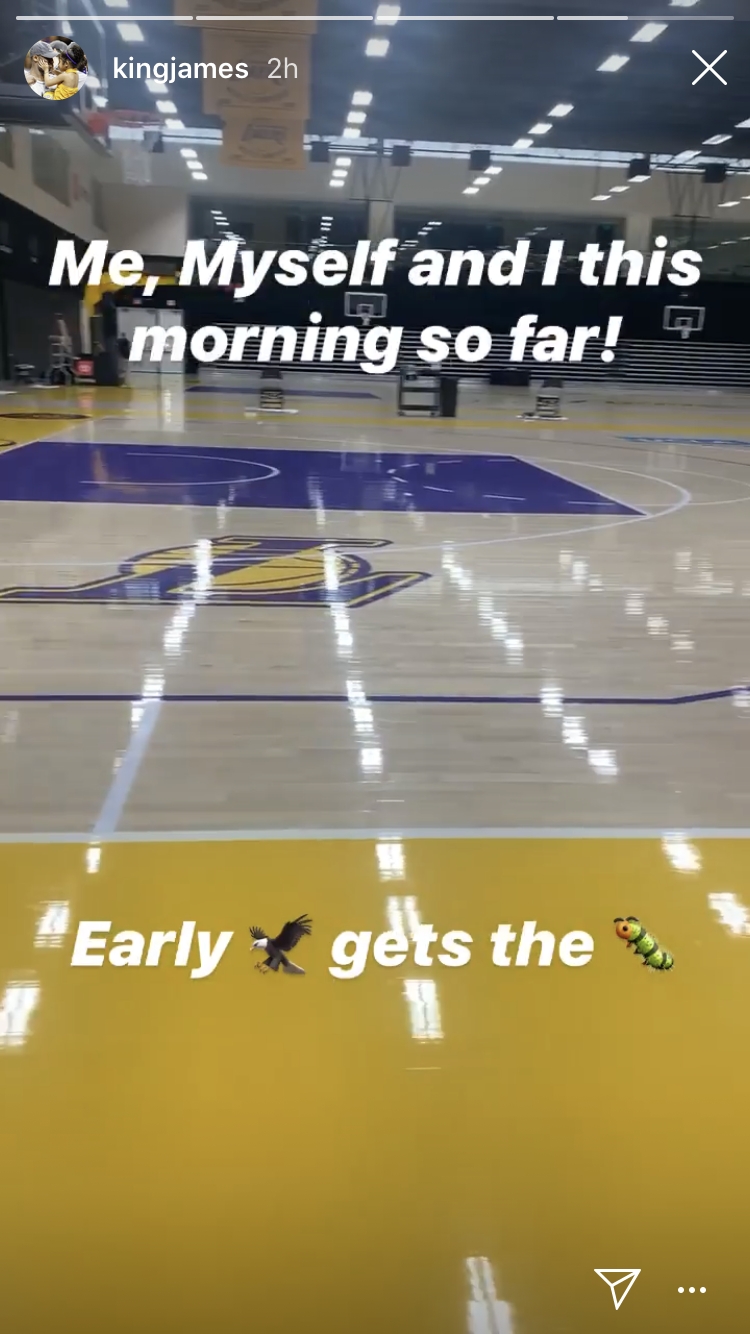 Rating: What music do you think he was playing while in the tub — Ultimate Gregorian chants or the Smallfoot soundtrack? 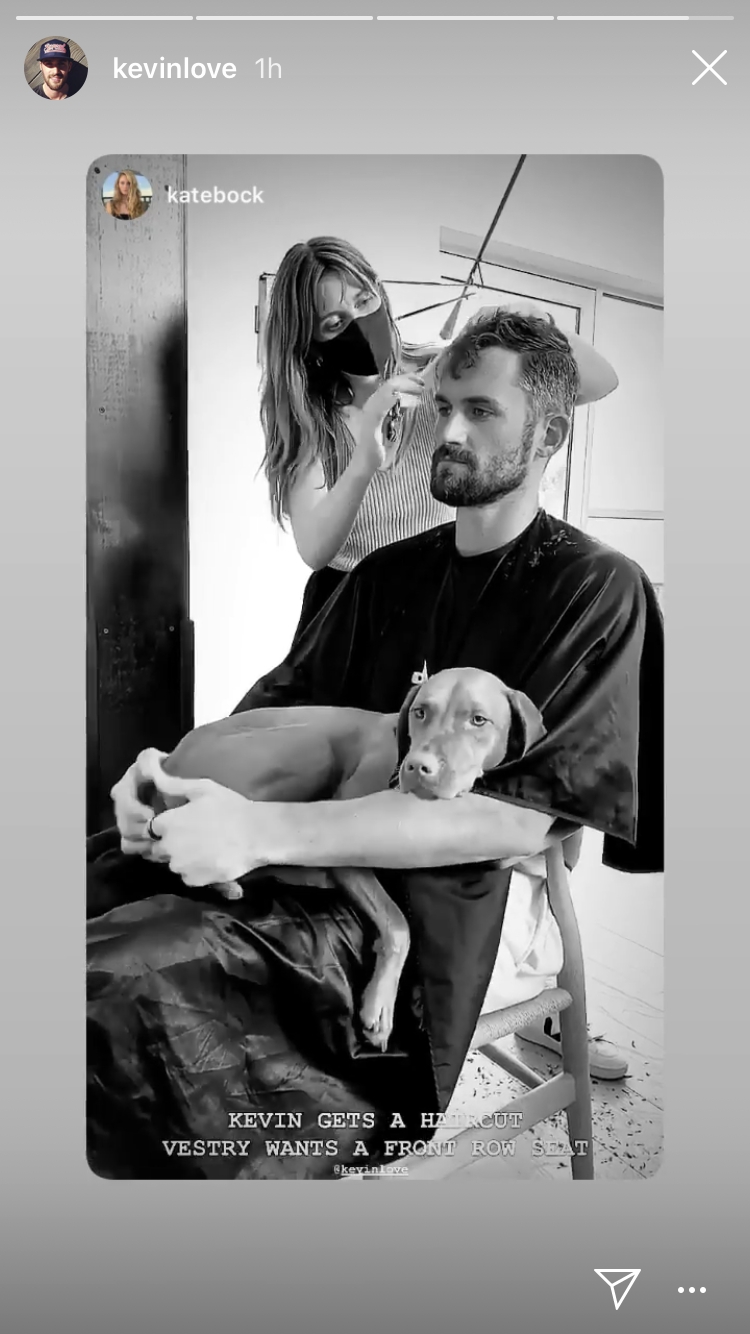 Love got a haircut and his little dog Vestry supervised. Actually I can never tell if this dog is your average medium dog size made small by Kevin Love, on the same token it could be a gigantic dog made to look regular.

Rating: You don’t have to let me know, for I enjoy the mystery. 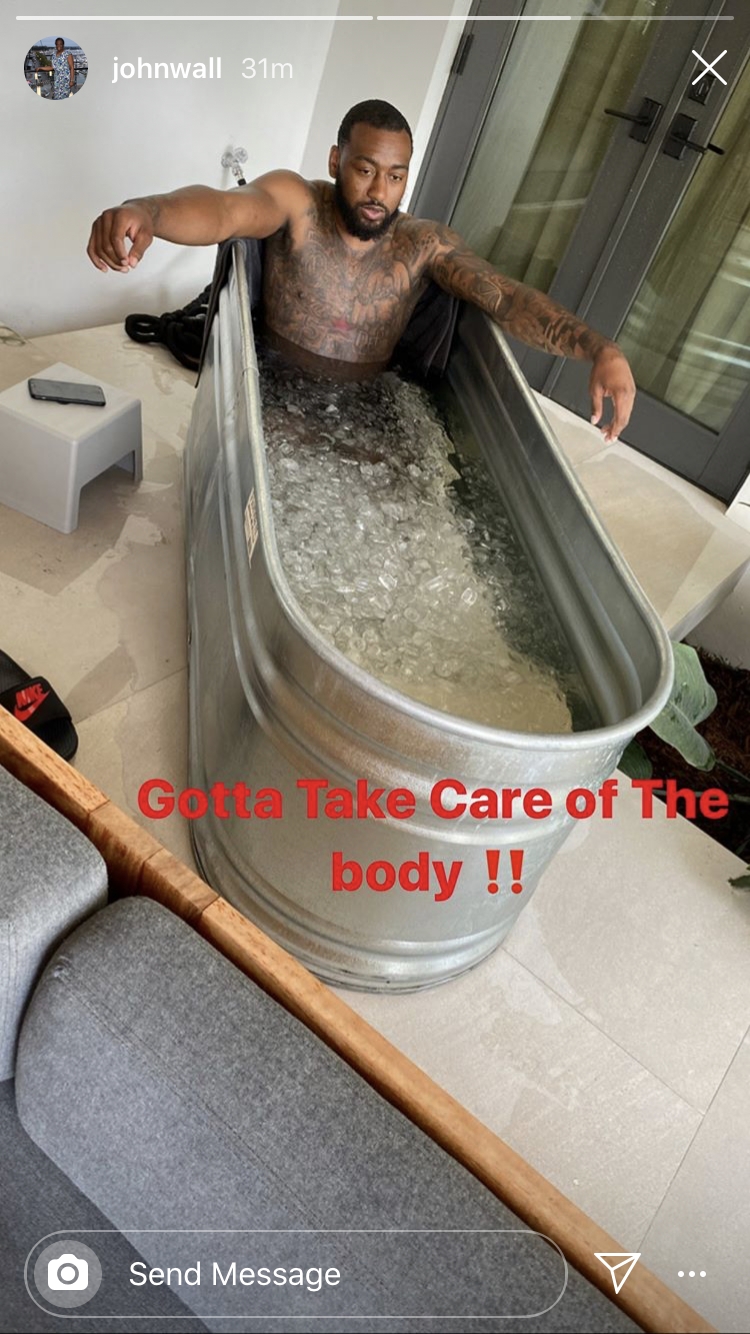 Ice baths were big this week and Wall saved all the excitement for his caption here instead of for his face. 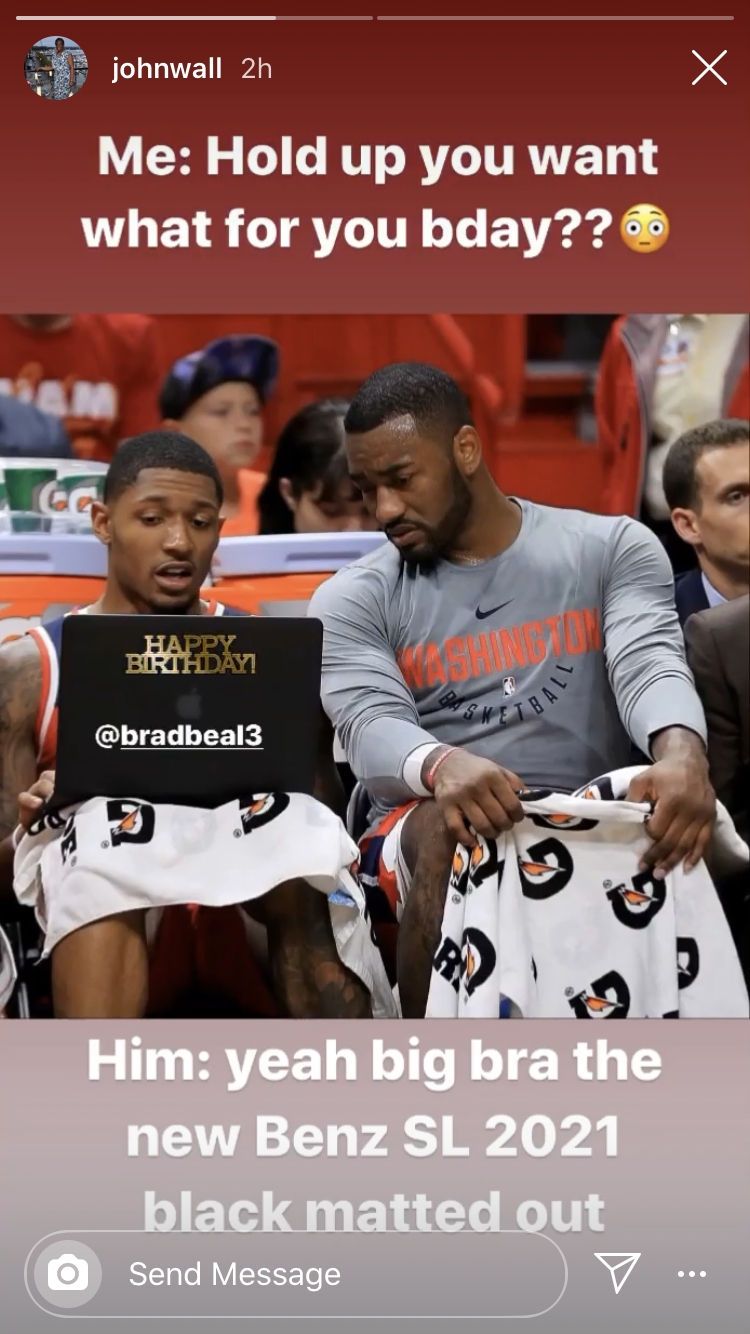 John Wall and Bradley Beal are like best friends. To wish Beal a happy birthday Wall made his version of a meme to tease him. They’re lucky and so are we. Thanks!

Rating: Jk, we all know he is entering the higher meditative plane of hooper Valhalla in that tub, thinking about the nice Beaujolais he’s got waiting for him.

Here’s a chill Adebayo ostensibly in his Miami backyard, letting the picture speak louder than words when it comes to the activity he is practicing that is best suited and most responsible for quarantine.

Rating: Do you see anyone in his physical proximity?

And here’s Tyler Herro, one day later, with a confusing slideshow of yes, what is probably a beautiful basketball court, but endeavoring his utmost to say the quiet part V E R Y V E R Y L O U D.

Rating: And I guess the loud part even L O U D E R. 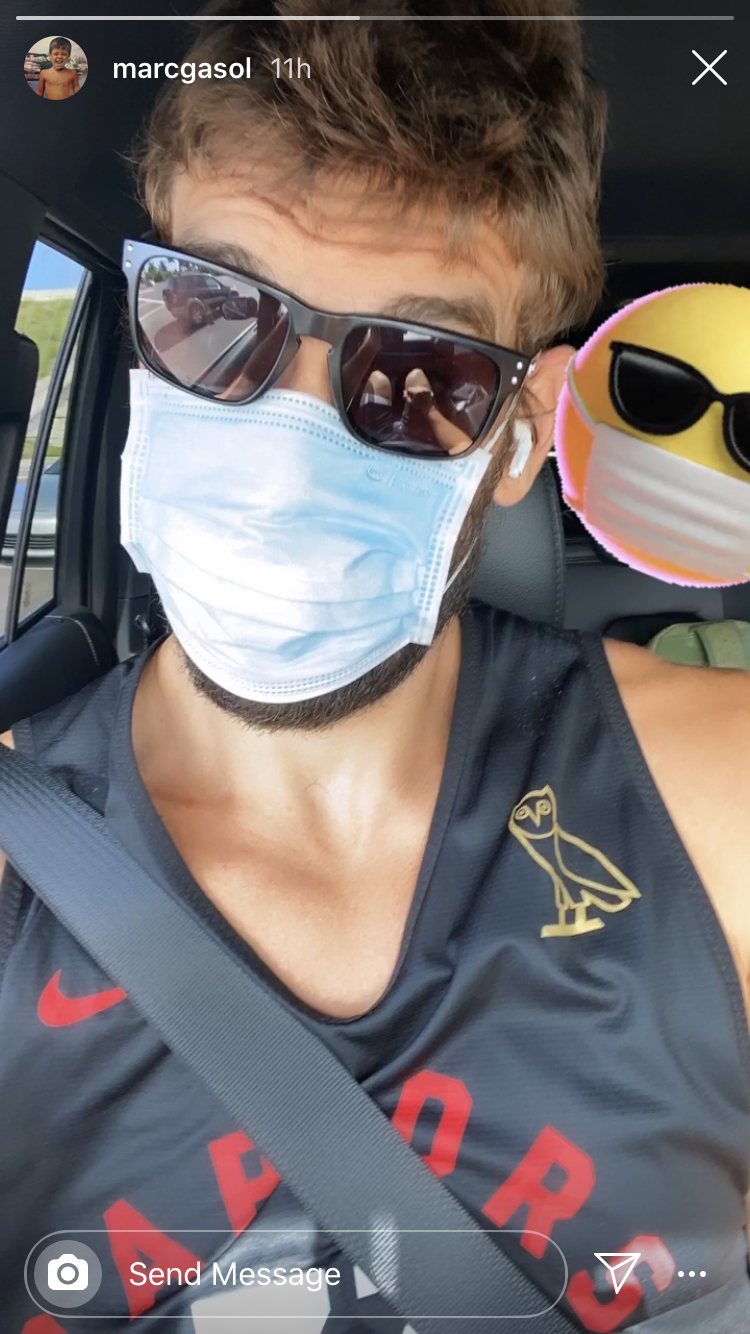 Gasol’s been getting a lot of close looks lately on account of his incredible Andalusian tan coming in hot and how svelte he seems. You know what? So long as Gasol is happy, that is all that matters. And if it makes other people nervous, how defined his collarbones or how carefree his demeanor, and what it all means for the Raptors chance for a two-peat, well, who am I to judge?

Rating: But I do really need to understand how long his torso is, in yards. 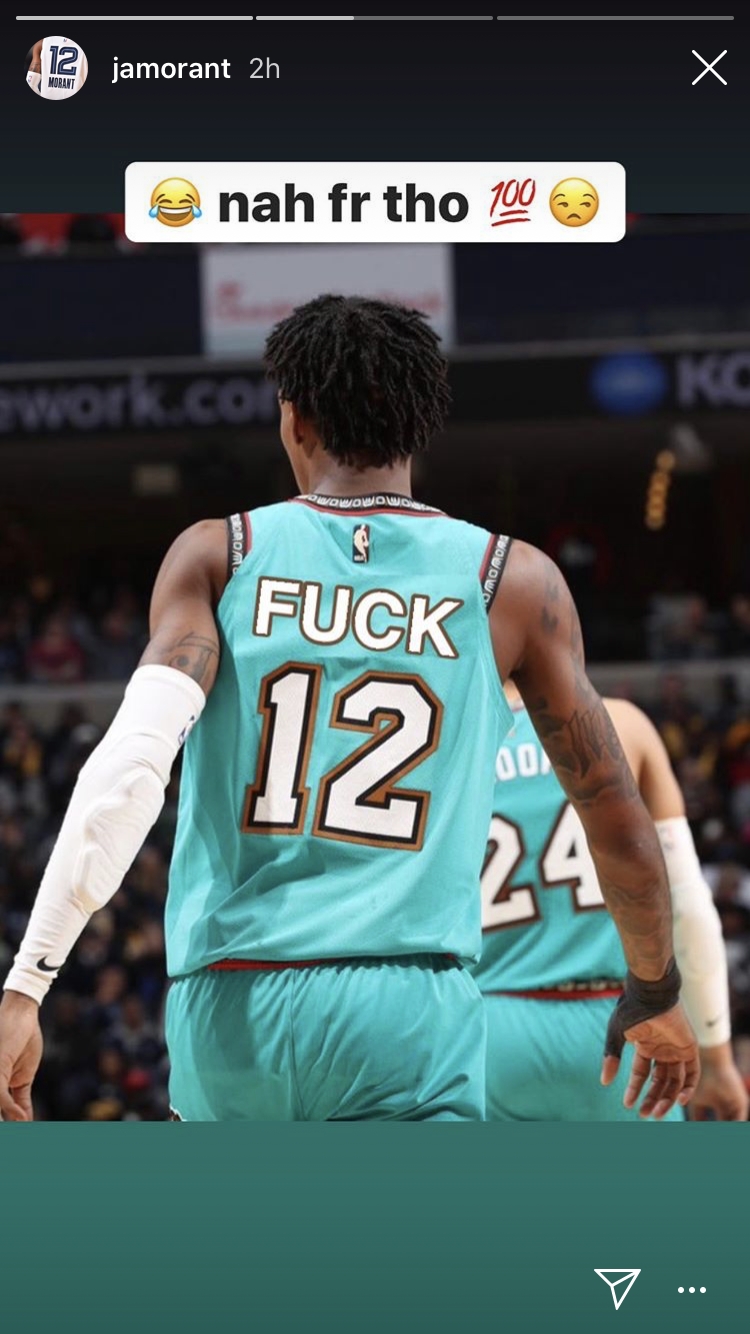 Out of the mouths of babes, you know?

Rating: Morant is a treasure and we are lucky to have him. Arrest the cops who killed Breonna Taylor.

Just wanted to take a moment to thank you guys for the love and positive energy sent my way. Very grateful for the people around me and the people that strive to make this world a better place everyday! Always stay true to yourself! 🙏🏽🦀🔮 #28 #morelife

It was the bee king’s birthday this week! The bee king is Rudy Gobert. Remember, last week, when he revealed his only friend in isolation was a tiny little bee? Well, that little bee came back to wish Gobert bonne fête. 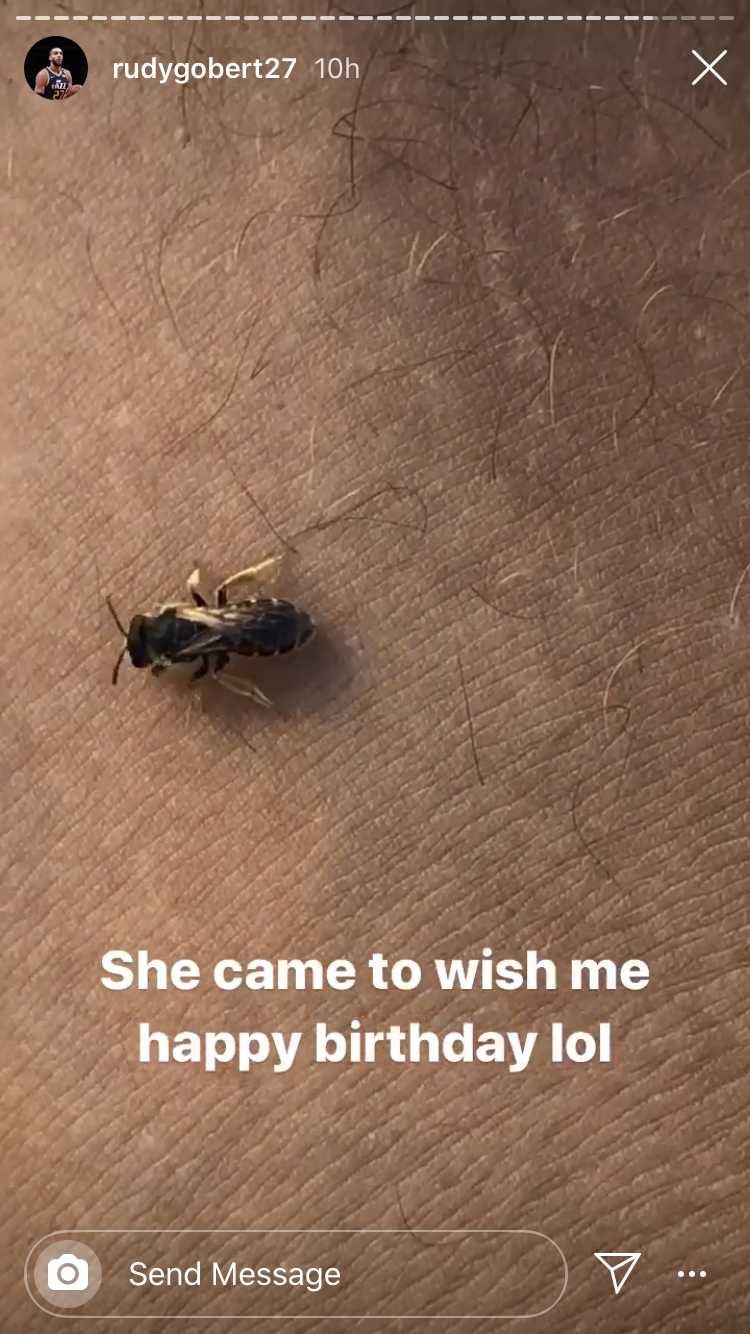 Rating: That bee also took this picture, and painted the painting of Rudy Gobert that a one year older Rudy Gobert is smiling under. 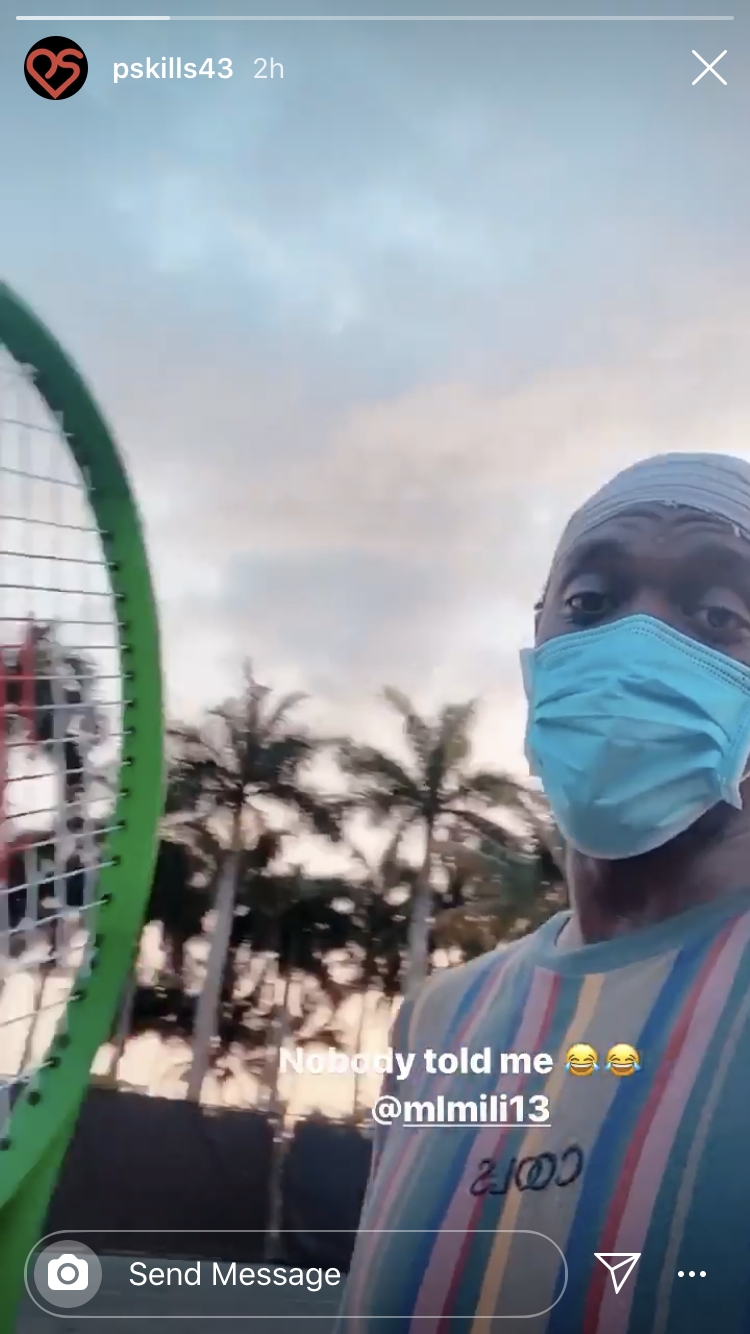 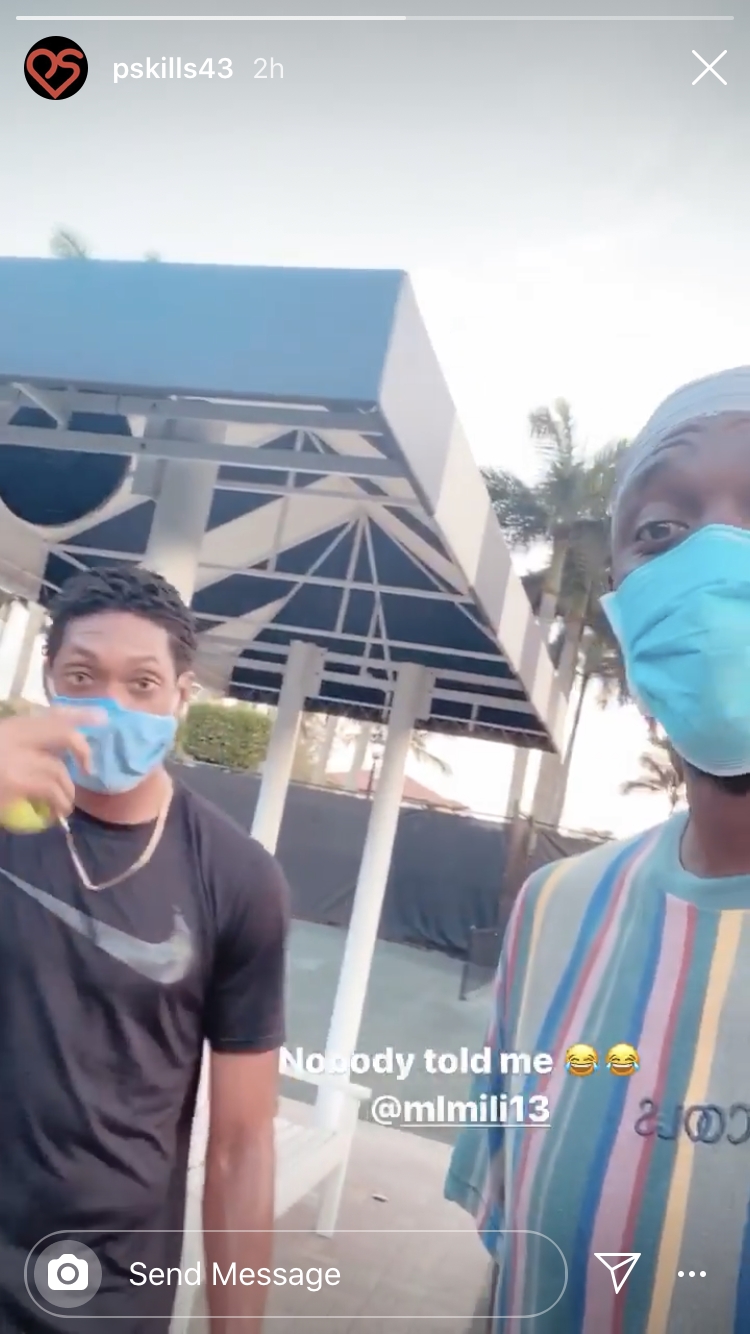 Siakam arrived with the rest of the tender (as in their capable hearts, nothing to do with their game-readiness) Champs in Florida this week, and hit a different kind of court with Malcolm Miller, who is actually pretty good at tennis. That’s what Siakam was lamenting. 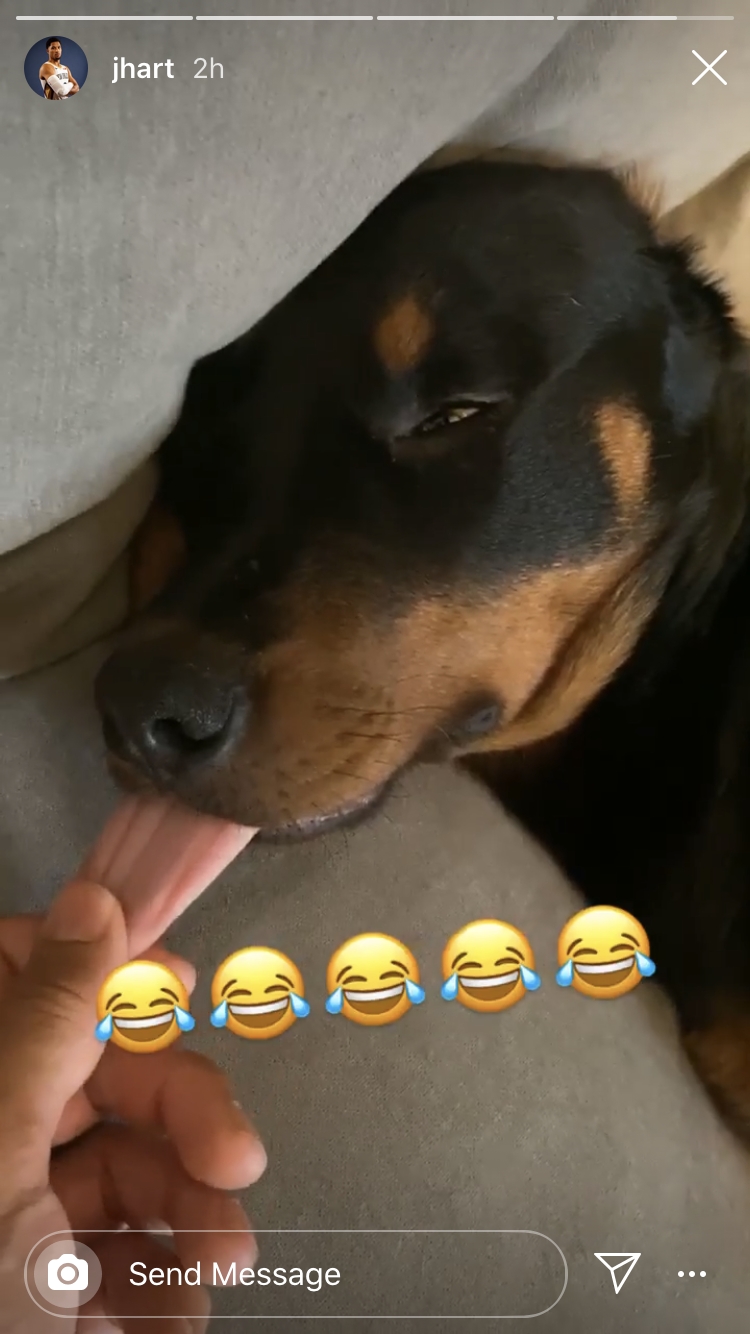 Don’t worry, I’m here to assure you that this is A Thing™ Hart does with his very patient dog. He gently pulls on its protruding tongue as it sleeps, like really very softly, until it is well out of its mouth, then he slowly brings it back. They love it!

Rating: But this dog is probably ready for Hart to start practicing again, all the same. 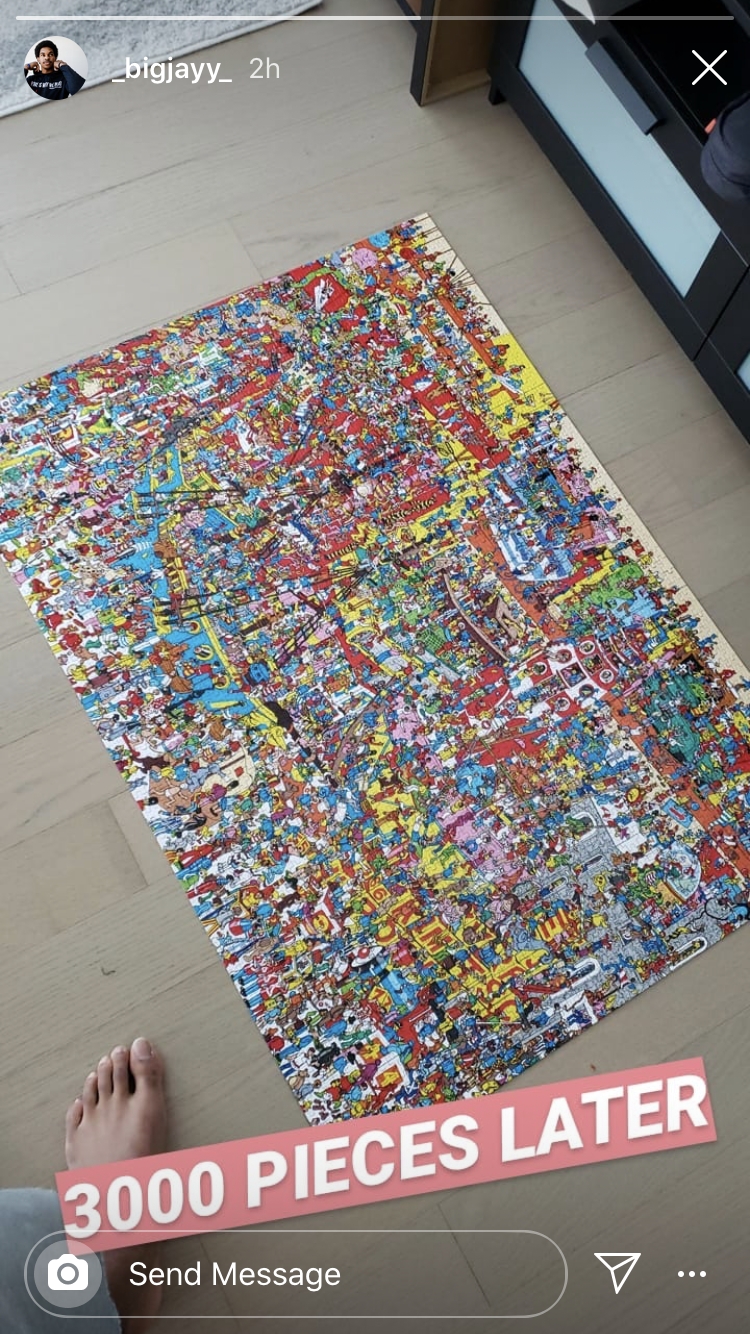 Sweet genius, notable would-be rocket scientist and the Nets truest hope, Jarrett Allen, completed a 3,000 piece puzzle this week of, I think, a Where’s Waldo scene. What? Did he find Waldo? I’ll ask that you please leave. Waldo was the piece Allen started with.

Rating: What’s not pictured is the quantum science calculations Allen was casually drafting up on the side as he did this. 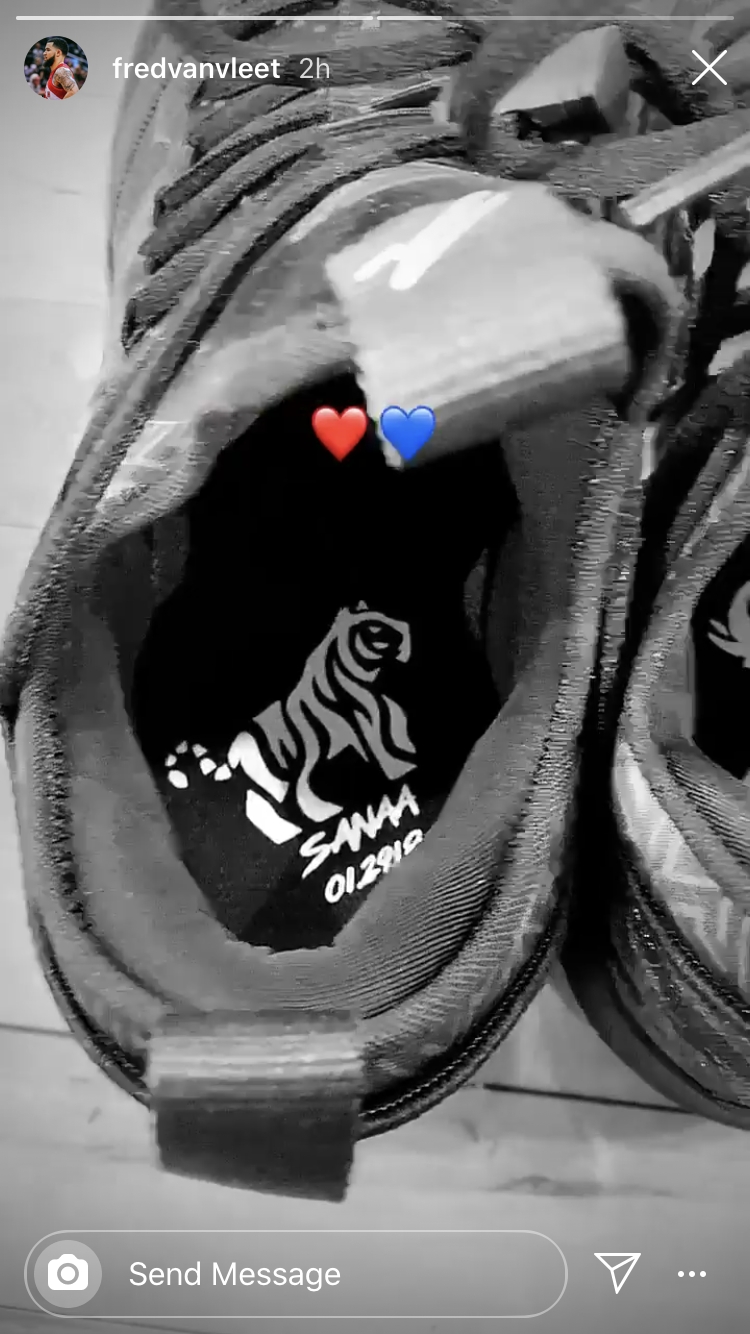 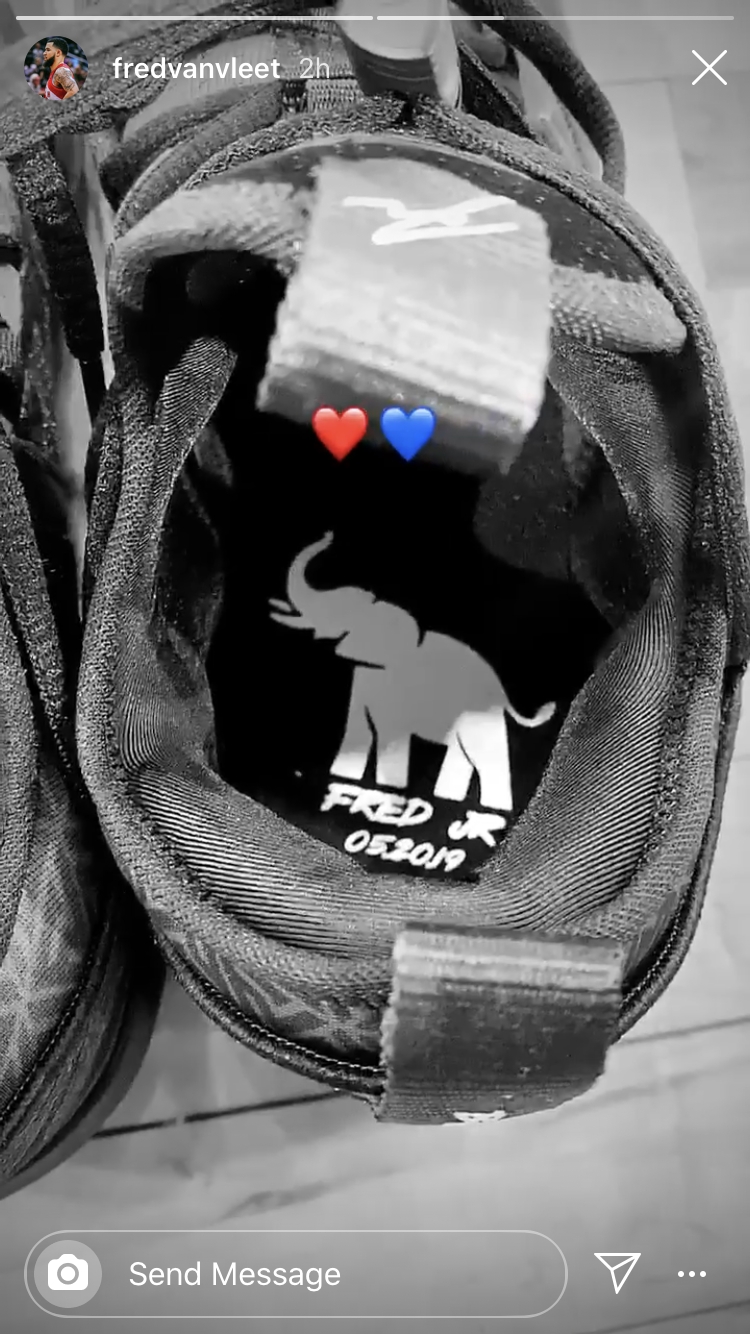 Ooooh buddy this is going to break and make your heart. Fair to say that VanVleet’s been missing his family a lot, since he was one of the first players to get down to Florida. First, he shared the inside of his custom shoes, in one the name and birthdate of his daughter, in the other the name and birthdate of his son. Both have outlines of the animals he’s said in the past he associates them with. Are you feeling a little woozy? Ok, come back. 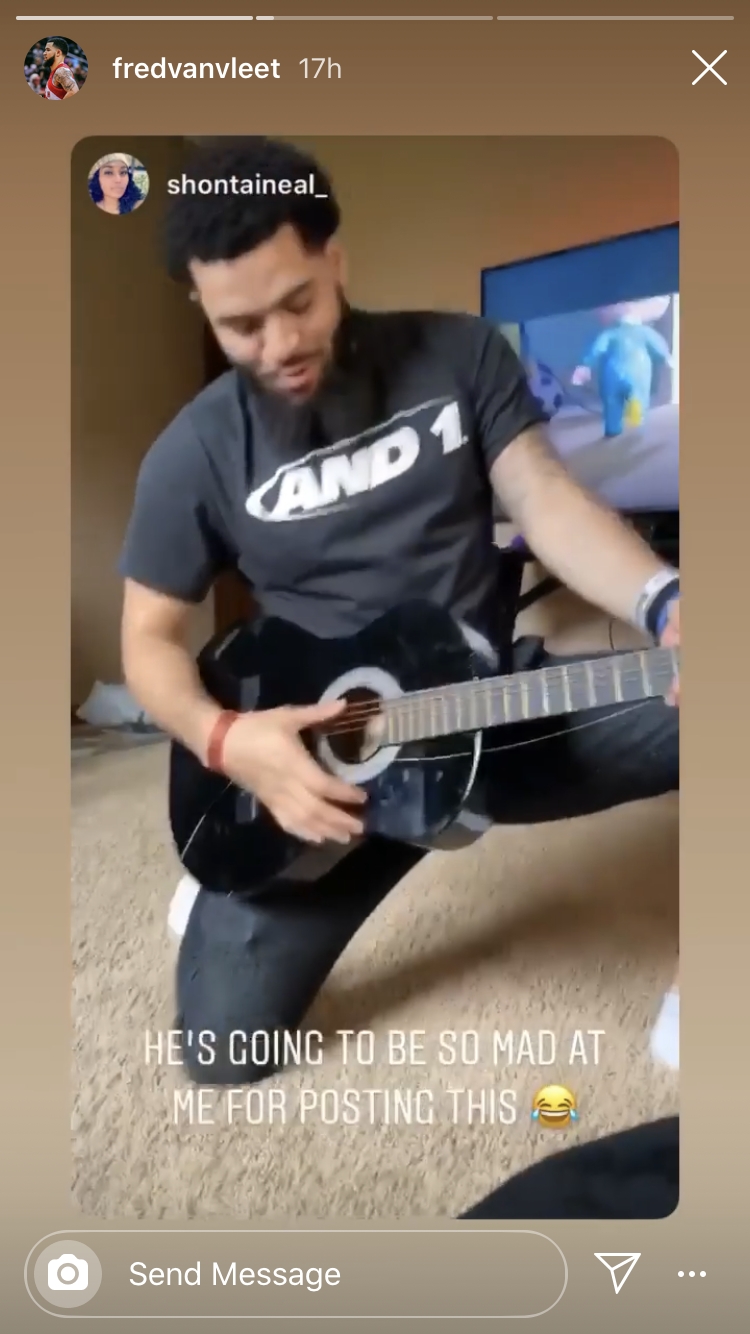 Later in the week he shared a video his wife, Shontai Neal, took of him doing air guitar and nailing a really good-bad impression of someone singing “Sweet Home Alabama.” He only did about two lines before he cracked up.

Rating: Build you up to break you down that’s basketball in the bubble, baby! 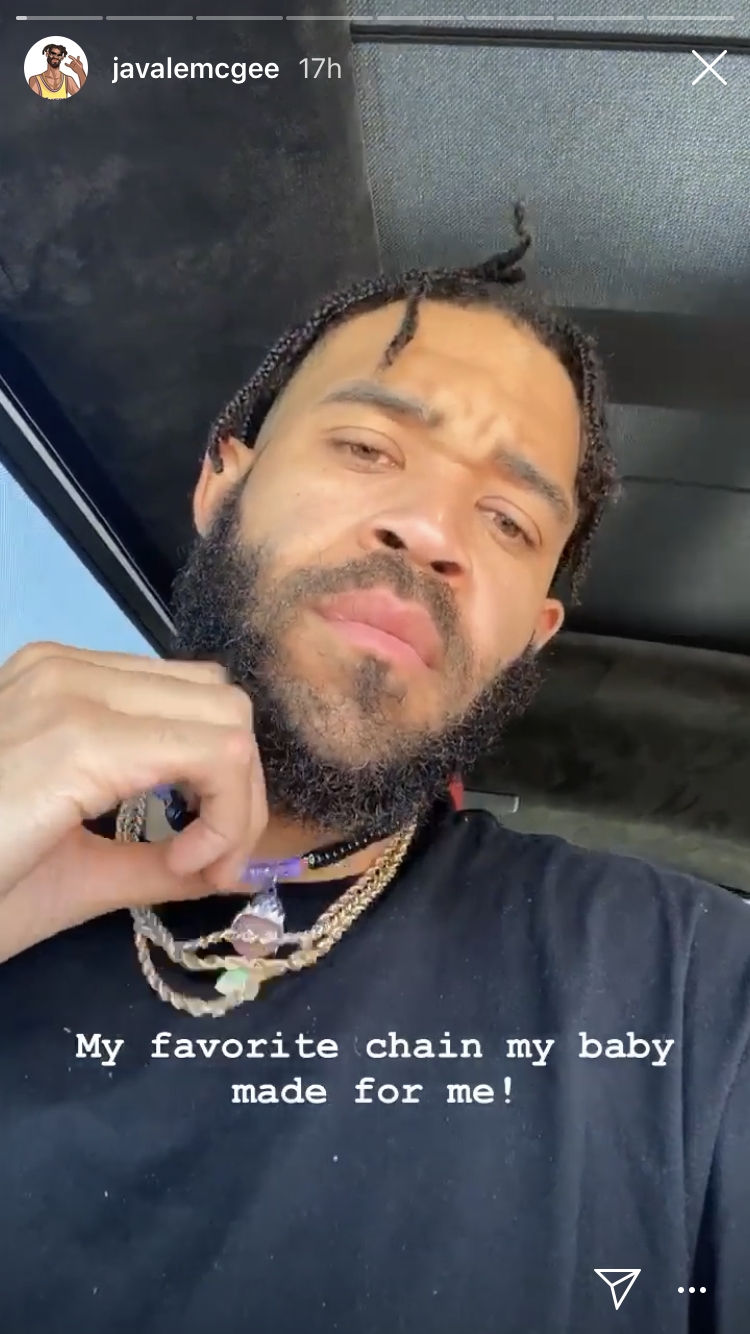 McGee shared a closeup of his most precious piece of jewelery, a necklace his daughter made him.

Rating: We’re not sure if there’s an official, league-sanctioned award for Most Valuable Dad yet but we’re looking into it.

Ingles shared some personal news. Not about him though, about the teen he caught on camera peeing on his driveway.

Rating: This seems impossible but the permanently hallowed place skaters have held in my heart took a scorching off this roast. Ouch. 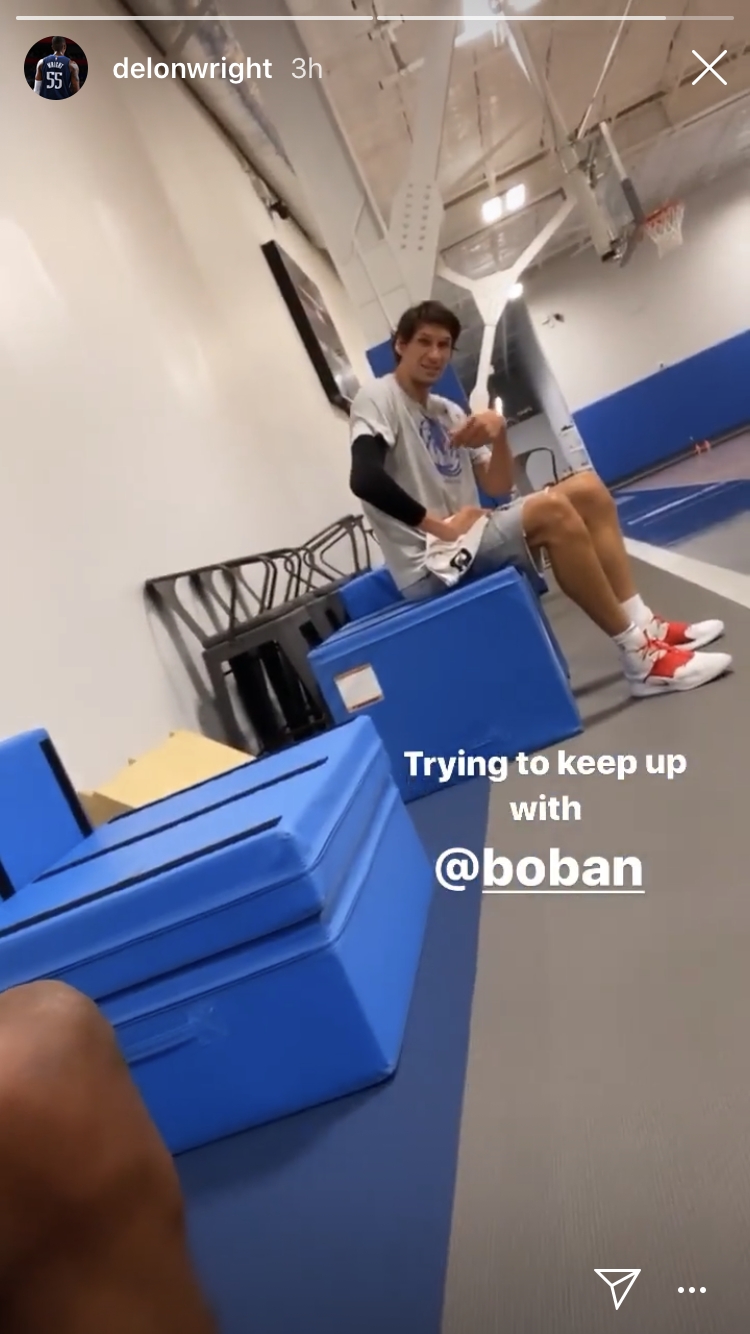 There’s a lot of genuine excitement, no matter your feelings on the bubble or the return to play, that players have in getting back on the court and seeing their teammates again. I don’t know what could much better encapsulate that feeling than an ecstatic Delon Wright giggling his butt off at seeing Boban again, and Boban, egging him on.

Rating: Also it must be fun to hang out with a guy who got to pretend to fight Keanu Reeves in a library. 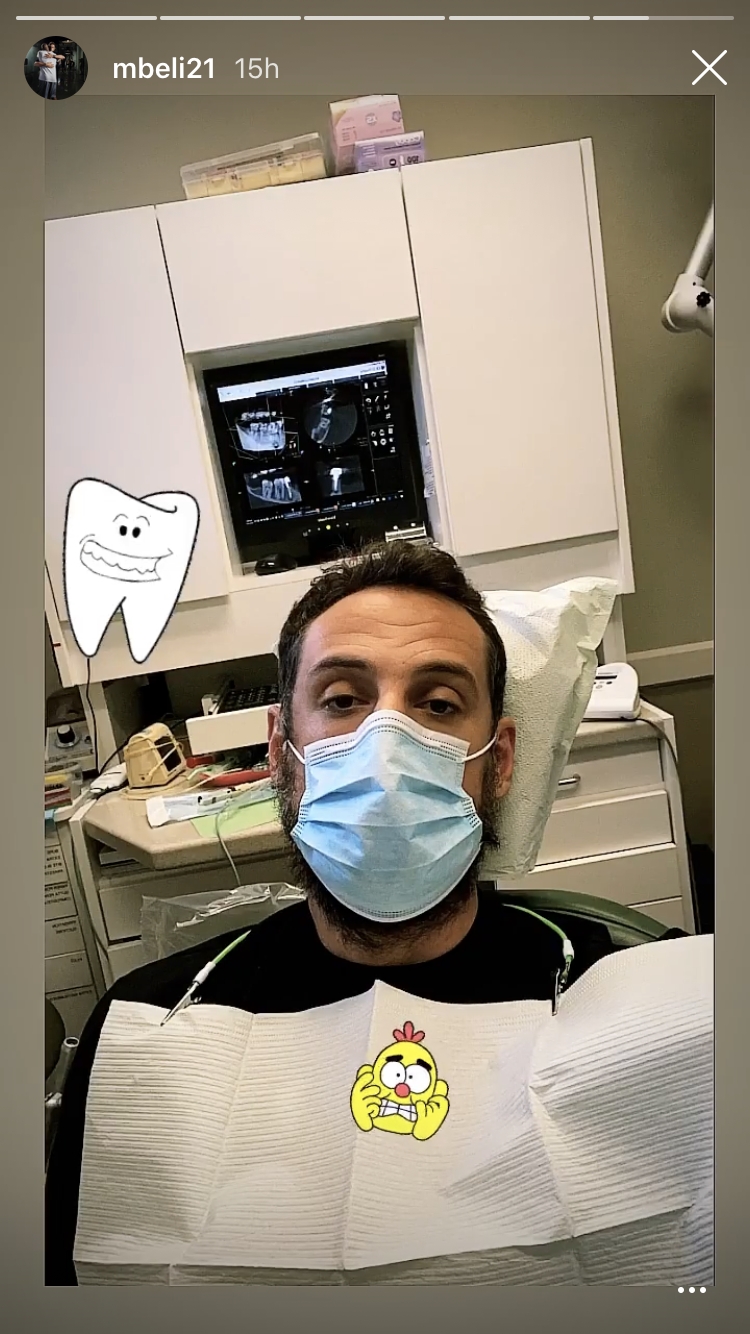 Even if its professionals were on a hiatus, oral health doesn’t take a break for anyone. Belinelli had to hit the hot seat of dentistry this week and he was nervous! Also look at how big his teeth are back there! He’s not on relaxants, those are just his smoldering, Italian eyes. 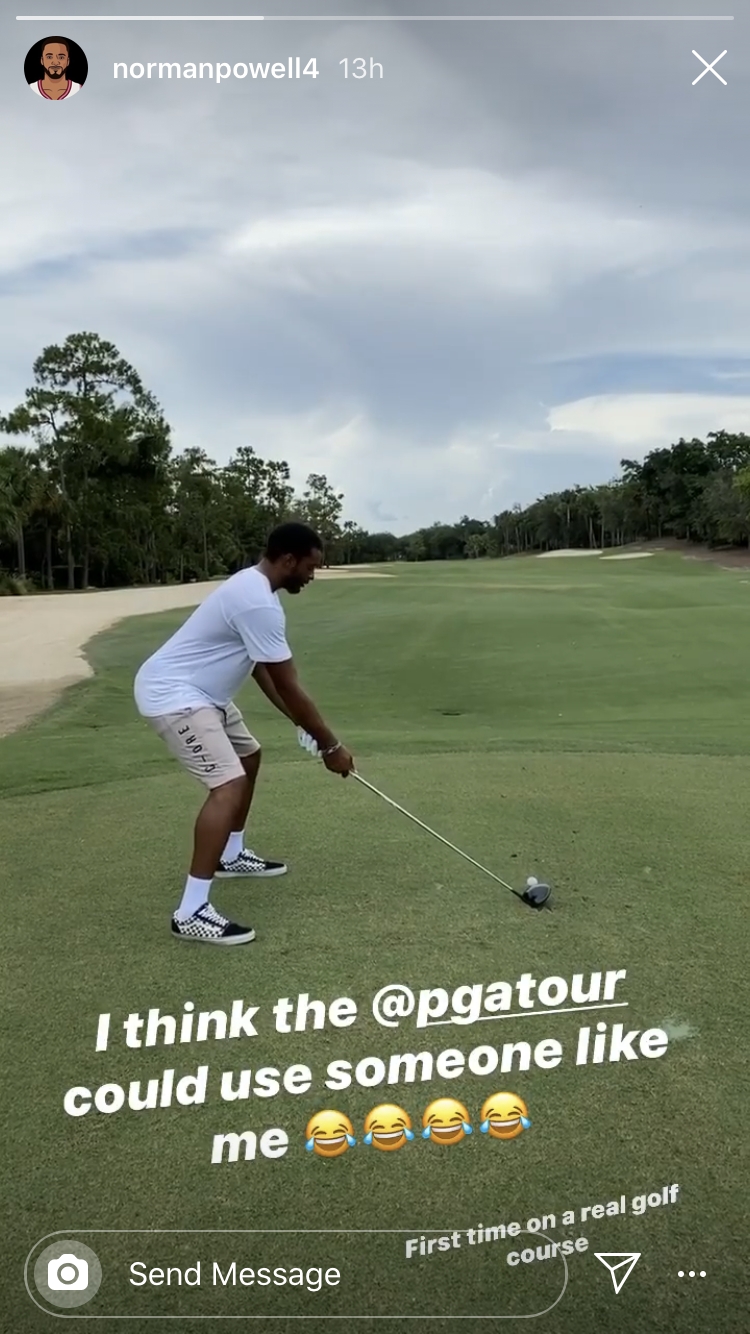 Like his teammate Siakam, Powell took to alternate avenues for sport on his arrival in Florida this week. He admits it was his first time on the links but, and I know truly nothing about golf, this seems like a really natural stance to me.

Rating: PGA could stand for Powell Gets Albatross 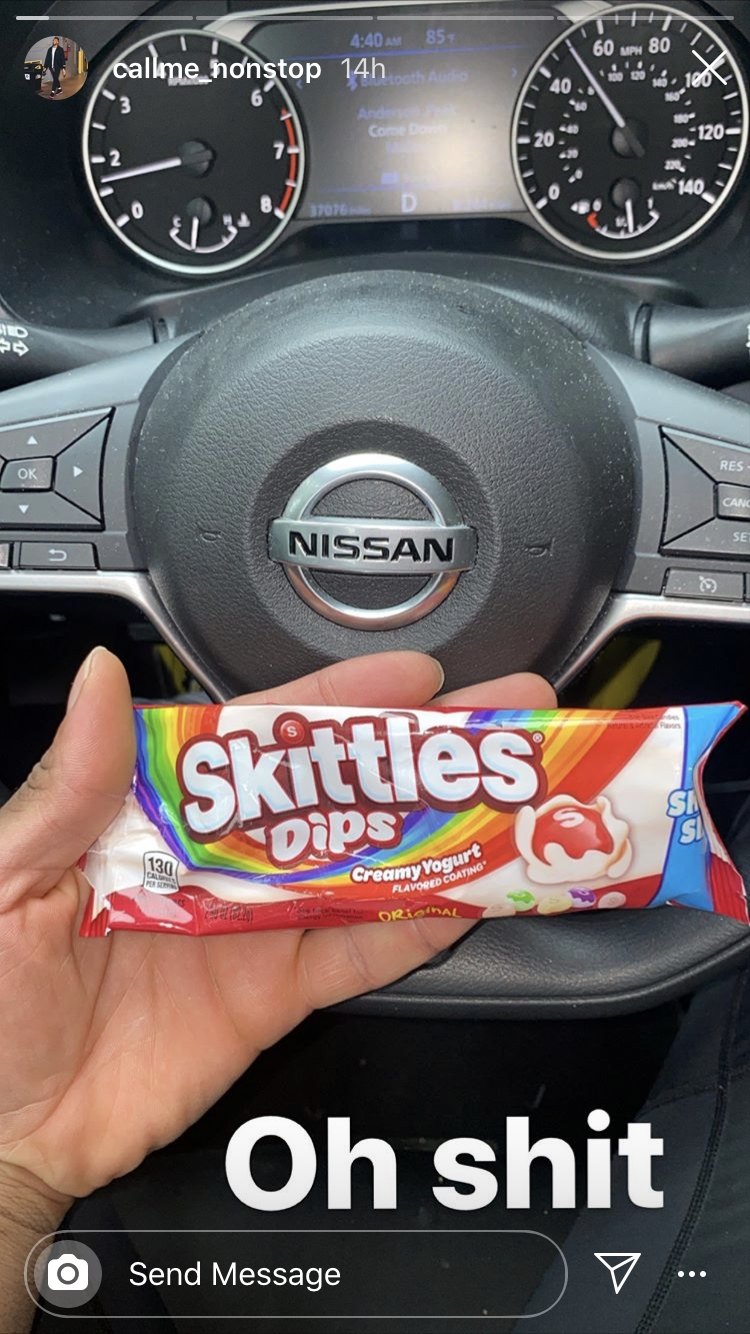 Man, my reaction was the exact same to Okogie’s when I saw this picture.

Rating: I picture his face as happy as the two eyes the dashboard instruments look like, the nose the steering wheel sort of appears as, and the mouth the bag of candy resembles all combine to make.

Loyd aka “random guy in a suit” from the infamous Kawhi shot photo, finally got his championship ring! By his reaction, he had maybe forgot it was coming or else gave up watching the tracking on this precious cargo. He’s been playing in Europe this year so the other possibility is that when it arrived he was sleeping or just woke up, the time zones being their own entire damn thing.

Rating: What kind of tracking do you think was on this bad boy? 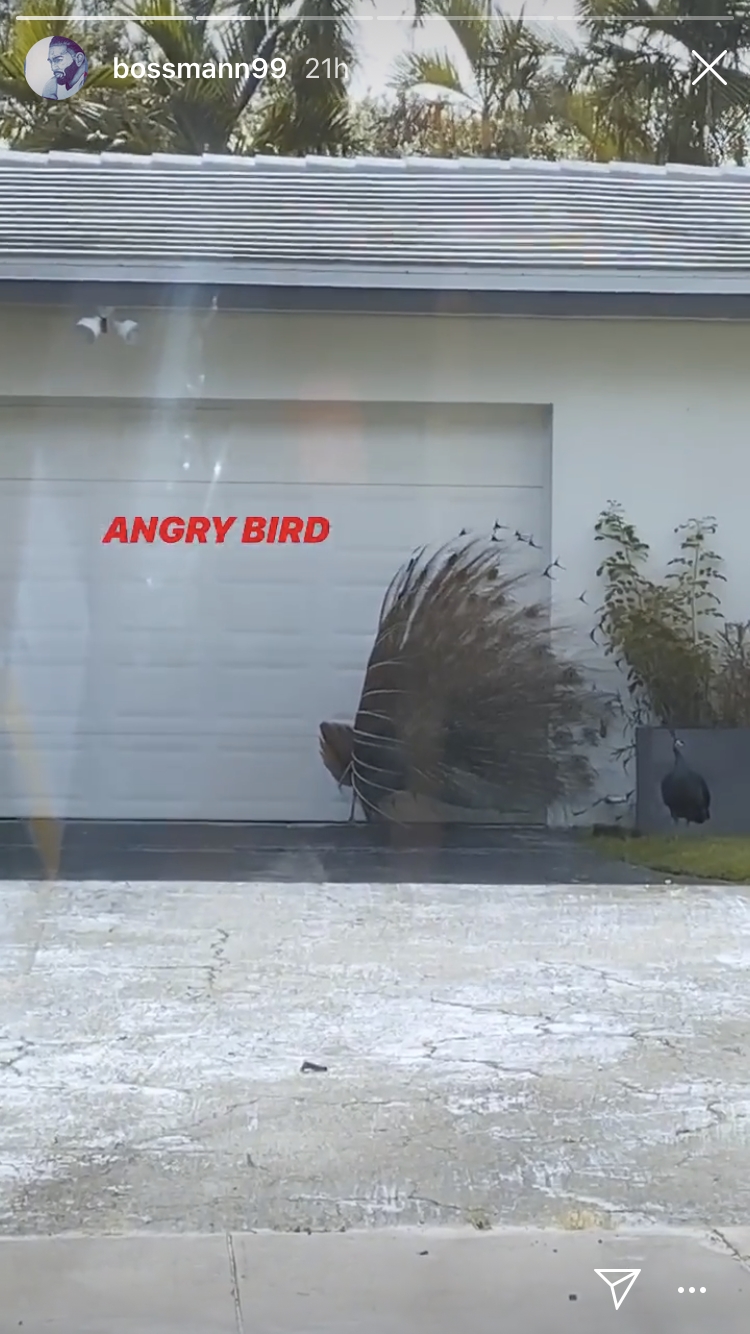 Crowder called this one exactly right.

Rating: The red text was a very nice touch.

Arrival in saint martin, the best feeling is to discover the land in the distance….

Look I know he’s off many of your radars, but allow me to place him firmly back on. Boris Diaw is currently sailing the high seas, poetically summarizing what it must have felt like to be a pirate or else Tom Hanks in Castaway. He’s even got Manu Ginobili in the comments, asking for Diaw to get his gear ready because they’ve got some “sunken schooners to explore (bug-eyed winking tongue out emoji).”

Rating: Gino and Bobo in the remake we need of Fool’s Gold.