The Wizards could be in a very different position right now.

After last season ended in a rather non-competitive first round exit at the hands of the Sixers, there were calls to tear things down completely. They could have chosen to trade Bradley Beal when pressure, at least from the outside, mounted for them to do so once Russell Westbrook put in his request to leave the nation’s capital a year after he arrived in a trade shipping out longtime face of the franchise John Wall.

That transition from Wall to Westbrook, with all of the financial burden attached to both players, felt like a desperation play, one last effort to salvage things before entering a rebuild. Instead, they managed to seize opportunity when it presented itself, appear to have nailed their coaching change from Scott Brooks to Wes Unseld Jr., and restocked the roster with talent and depth in a way few could have foreseen six months ago.

Similar positions have doomed other franchises, pushing them towards a full teardown and a long rebuilding process. The Wizards, in every sense, resisted that path and appear to have come out better for it. At 10-4, Washington is tied for the best record in the Eastern Conference, alongside the Nets, fueled primarily by the league’s third-best defense, according to Cleaning The Glass. It’s the franchise’s best start since 1974-75, which has resulted in contract extensions and promotions for much of the organization’s front office, including general manager Tommy Sheppard. It feels like a new beginning for a team that desperately needed one.

How the Wizards got here did require some luck. When Wall tore his Achilles in the middle of a massive contract extension, that could have been the end right there considering how important Wall has been to the franchise since 2010. Flipping Wall and a first-round pick to the Rockets for Westbrook was another risk that could have not worked out. At the time of the deal, Westbrook had three years left on his supermax contract, and when they traded for him, they had to at least expect — if not assume fully — he’d be a Wizards for the rest of the deal.

Westbrook’s brief tenure had its ups and downs, including a tear at the end of the regular season to drag Washington to the playoffs. That performance raised his value and the Lakers, desperate for a third star, provided them with an out, fueling a roster overhaul over the summer that has given Washington its best supporting cast around Beal in some time. Turning Westbrook into Kyle Kuzma, Montrezl Harrell and Kentavious Caldwell-Pope was a coup. Add in being able to sign-and-trade for Spencer Dinwiddie, a more flexible backcourt partner for Beal, after dealing Westbrook, and it looks even better.

There was luck involved, for sure. They don’t get that chance in a world where the Lakers dealt Kuzma and Caldwell-Pope for Buddy Hield instead. There’s nothing that Sheppard really did to manifest this directly, but his recognition of the need to get a deal done and not get hung up in the weeds on draft compensation or whatever else when opportunity came knocking is the kind of initiative that can change the direction of a franchise. It’s the kind of deal that the Trail Blazers weren’t able or wiling to make to better support Damian Lillard this summer, and are probably paying for now as they struggle through this season.

The result is a team with depth, balance, and versatility that hasn’t been seen in Washington in some time. Under Unseld, Washington is playing connected team defense where everyone is playing in sync covering up each other’s weaknesses. This kind of scheme probably wouldn’t be tenable with Westbrook at the point of attack. He’s a gambler, often living in his own world on defense instead of playing within a defined role. The Wizards, as we know them so far, would not exist without the scheme they are playing, and the personnel to execute it.

Deni Avidja, last year’s top pick, developing into a legit wing stopper as the youngest player in the rotation has been key. Harrell’s energy in the frontcourt has been contagious. Kuzma and Caldwell-Pope were important cogs in the Lakers title team that defined themselves on the defensive end, capable and willing to fill the roles asked of them and work within the system. Daniel Gafford continues his development as an anchor in the middle, rewarding the team for putting their faith in him with an extension this offseason.

There’s also some reason to think the Wizards should get better on offense. Currently, they are 17th in offense according to Cleaning the Glass, and that’s with Bradley Beal shooting a career-worst percentage from the field (40.7 percent, down from a career average of 45.5 percent) and from three (25 percent, down from a career average of 37.4 percent). Beal is particularly struggling on catch and shoot three-pointers, where he’s shooting 21.2 percent on 3.3 attempts per game after shooting 38.7 percent on the same volume last year. He’s also seen his efficiency dip at the rim, falling from about league average to well below. 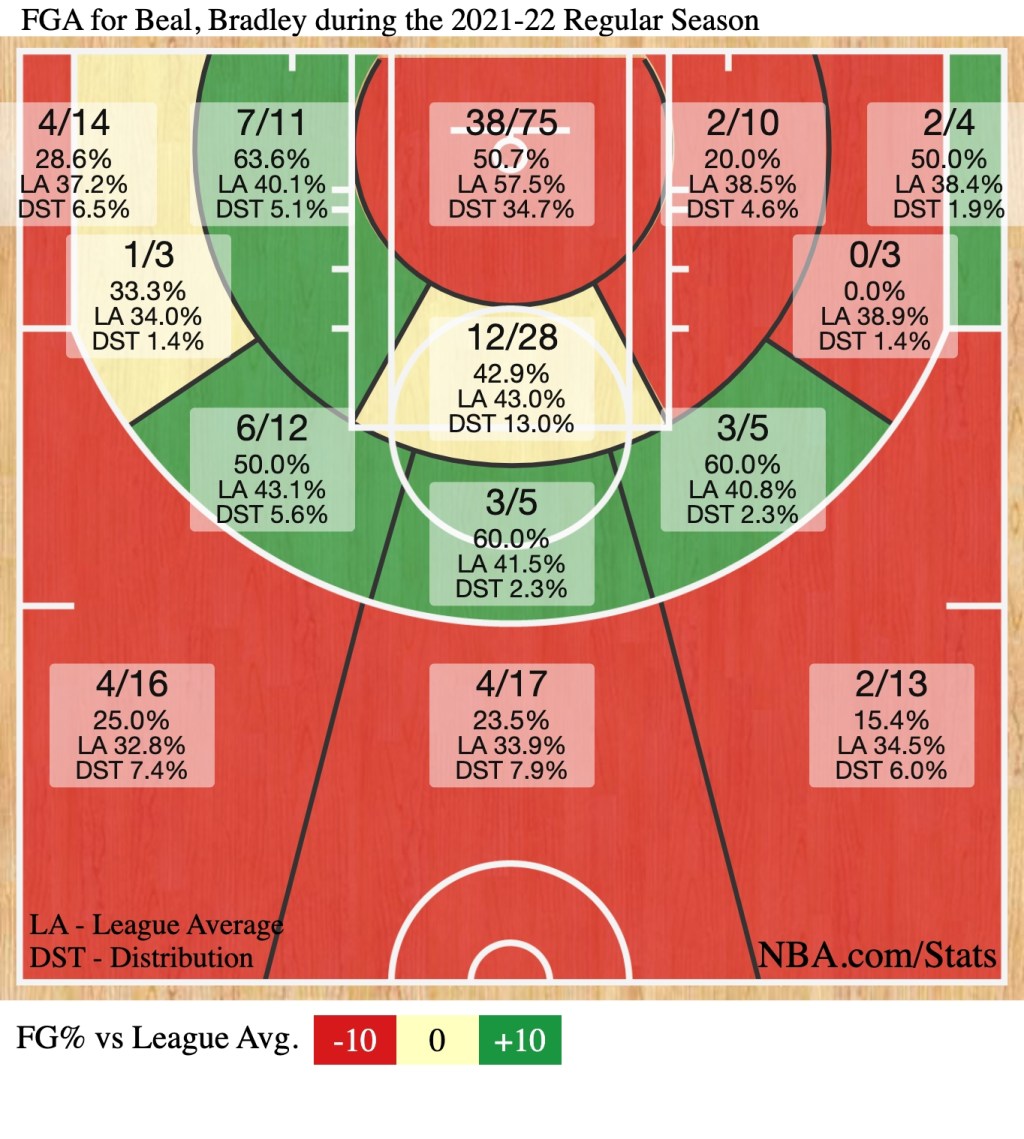 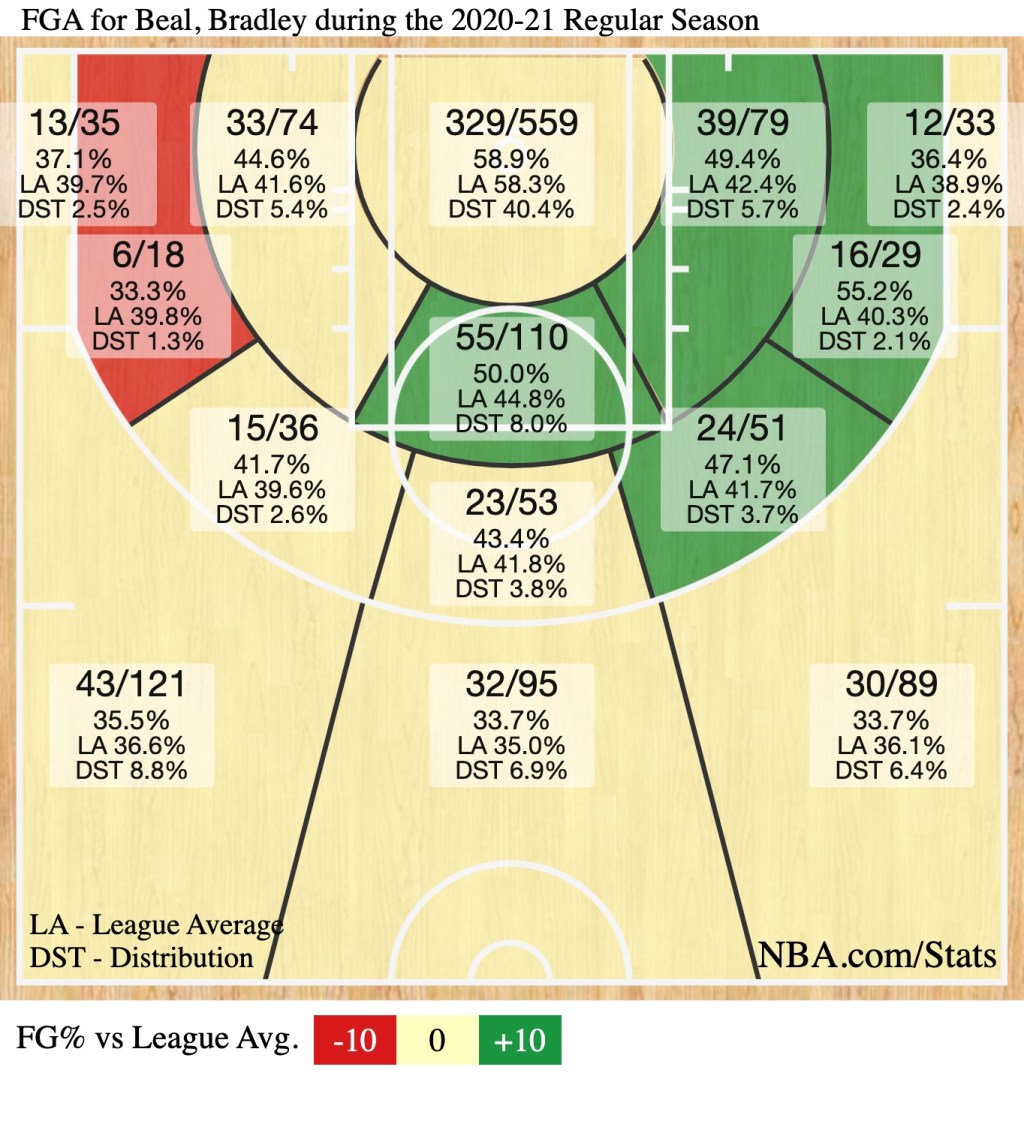 As he works his way back to normal and grows more comfortable with the new pieces around him, the offense is going to be better — that’s the benefit of holding onto an All-Star who averaged over 30 points a game last year, but doesn’t need to now. And whenever Rui Hachimura comes back, they’ll add more scoring punch to the rotation.

Avdija and Hachimura are two pieces worth considering in thinking about where the Wizards are. In another world, where they did decide to start over, they’d be pieces they’d be evaluating in suboptimal context as the team loses a lot and adds even younger talent over a few years. Instead, with the Wizards winning, they get to contribute to something now, play in roles more suitable to their current skillsets rather than being thrust into leading roles, and continue growing in a positive environment.

Not every team has the ability to emerge anew from a situation like the one Washington found itself in this summer, but credit to Sheppard and the organization for recognizing an opportunity for a reset rather than rebuild this offseason and pouncing. From the new coaching staff to roster moves, it’s hard to imagine a better offseason and the results are bearing that out early on the floor.