‘Point Break’ At 25: Is It A Great Bad Movie Or Just A Great Movie? 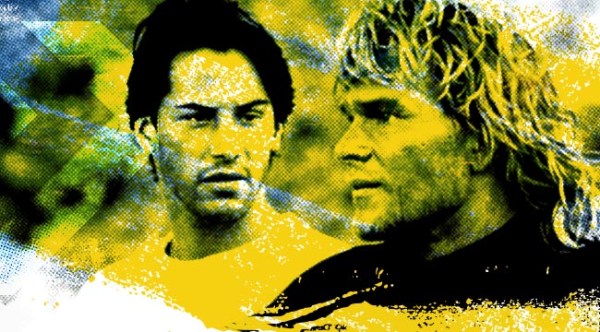 Point Break was released a little more than 25 years ago, becoming a weirdly-enduring pop culture touchstone from a time that wasn’t still the ’80s but didn’t yet quite feel like the ’90s (“Smells Like Teen Spirit” wouldn’t hit for another two months).

No one could’ve known at the time. In fact, it was only the fourth biggest movie of that weekend, which also included Boyz In The Hood, 101 Dalmations, and Regarding Henry, and came just a week after the opening of Terminator 2, the biggest film of that year (directed by Point Break director Kathryn Bigelow’s then husband, James Cameron, who also helped Bigelow rewrite the ending of Point Break). Point Break eventually grossed a respectable $43 million in the US, not quite double the budget, but it wasn’t as if it had “legs,” even by 2016 standards. By August 1991, it was out of the top 10. Even if we look back on it now as a kind of breakout role for Keanu Reeves, at the time it played second fiddle to Bill and Ted’s Bogus Journey, which came out the very next weekend and had a bigger opening ($10.2 million to Point Break‘s $8.5). Maybe both studios screwed themselves by splitting the Keanu ticket? Who knows.

But even if it got lost at the time, Point Break feels like it’s outlived anything else that was happening at the time, at least as a cultural reference point. Edgar Wright’s Hot Fuzz included an extended Point Break homage.

Point Break Live, a silly stage production of the film, has been running for 13 years. Terminator 2 was still releasing sequels as of last year, you say? Well Point Break got a remake (which was better), and that’s to say nothing of The Fast and the Furious, a billion dollar franchise currently in its eighth installment that began as a ripoff/homage to Point Break.

To what can we attribute Point Break‘s amazing longevity? Surely, part of it is novelty value. For all its merits, Terminator 2 doesn’t have any B-movie lines as beautiful as “speak into the microphone, Squidbrain,” or “I was taking shrapnel in Khe Sanh when you were crapping in your hands and rubbing it on your face!†”

I’d be lying if I said Hot Fuzz and Point Break Live didn’t enhance my enjoyment of Point Break, but both bits rely on people’s love of the original. The question that’s much harder to answer: is Point Break a great movie or a great bad movie?

If Kathryn Bigelow hadn’t gone on to make The Hurt Locker and Zero Dark Thirty (best picture winner and best picture nominee, respectively), I’m not sure we’d even be having this conversation. No one goes around quoting “I! Am! An FBI! Agent!” because Keanu’s line read was so convincing. We quote it because it’s not. While Keanu is a pretty decent actor these days (or at least, he and most of the directors he works with are aware enough of his strengths and weaknesses to utilize him well), in Point Break he did seem like… well, kind of like if Ted from Bill & Ted tried to play an FBI agent. Most of the Keanu scenes in Point Break, we’re laughing at him, not with him. But even if we don’t buy Keanu, does that mean we don’t buy the movie?

Oddly, for a lot of critics at the time, Keanu’s performance was what they liked most about it.

Reeves is a perfect choice for the youthfully malleable Utah; as an actor, he seems perpetually on the verge of a thought that can’t quite work its way to the surface. He’s charismatically puppy-brained and, watching him, we get caught up in the slow-motion meshing of his mental gears. -Hal Hinson, Washington Post

A lot of the snap comes, surprisingly, from Mr. Reeves, who displays considerable discipline and range. He moves easily between the buttoned-down demeanor that suits a police procedural story and the loose-jointed manner of his comic roles. -Janet Maslin, New York Times

Okay, so that last one wasn’t entirely a compliment, but still. As for whether it’s good or bad-good, though, they seemed as split on it at the time as we are now.

“Point Break,” director Kathryn Bigelow’s foray into the cosmic cult of surfer banditos, is an exercise in stylish lunkheadedness. It’s gorgeous but dumb as a post; watching it is a bit like shooting the tube and then getting cracked on the head by your board. -Hal Hinson, Washington Post

Director Kathryn Bigelow is one of the new-style action wizards who’ve never quite mastered the nuts and bolts of telling a story. …when the action isn’t pulsing, the movie goes limp. -Owen Gleiberman, Entertainment Weekly

A hare-brained wild ride through big surf and bad vibes, Point Break acts like a huge, nasty wave, picking up viewers for a few major thrills but ultimately grinding them into the sand via overkill and absurdity. -Variety

This turns out to be one of those beach bum-cosmic high armed robberies with which Southern California F.B.I. agents are no doubt constantly plagued. And Johnny turns out to be the perfect candidate for the job of surfing detective. -Janet Maslin, New York Times

Bigelow and her crew are also gifted filmmakers. There’s a footchase through the streets, yards, alleys and living rooms of Santa Monica; two skydiving sequences with virtuoso photography, powerful chemistry between the good and evil characters, and an ominous, brooding score by Mark Isham that underlines the mood. The plot of “Point Blank,” summarized, invites parody (rookie agent goes undercover as surfer to catch bank robbers). The result is surprisingly effective. –Roger Ebert

Janet Maslin clearly had some fun with it, but I think Ebert gets closest to the “truth” of Point Break. That it’s a strange and confounding mix of the patently ridiculous and the technically transcendent.

One of the reasons I think it’s so hard to decide between good-good and bad-good is that there are at least three distinct acting approaches in Point Break. There’s Keanu Reeves, who’s game, but in over his head, whose performance ends up being unintentionally funny (bad-good). I never believe Keanu as a surfing FBI agent, but it’s fun watching him try, like a cute dog wearing a sombrero. See: “Sir, I take the skin off chicken.”

Then there are Gary Busey as Johnny Utah’s partner, Pappas, and John C. McGinley as Utah’s hard on boss, Harp. Busey and McGinley both play Point Break like the silly, pulpy B-movie it probably looked like on paper. Not believable, necessarily, but broad in that perfect, cheese-pulp sweet spot. With lines like “the air got dirty and the sex got clean,” and “why don’t you astonish me, shitface,” it makes perfect sense why they’d choose to play it this way.

And, especially in Busey’s case, it works. Pappas steals every scene he’s in. From “crappin’ in your hands and rubbin’ it on your face” to “I could eat the ass end out of a rhinoceros,” to “this Calvin and Hobbes is FUNNY,” I’m convinced Gary Busey ad-libbed half his lines. At least, they sound so much like things the real Gary Busey would say that either Pappas is the character Gary Busey was born to play, or playing Pappas altered Gary Busey’s very consciousness. Either is equally plausible.

If everyone in Point Break had played their roles like Busey and McGinley (assuming Keanu had been competent enough to, which he wasn’t, though I’m pretty sure he would be now), it probably would’ve been an enjoyable, B-movie romp. But I doubt it’d be as memorable.

Because then we get to Patrick Swayze, and he’s playing Point Break deadly serious. He’s playing it like he’s in The Hurt Locker, or Zero Dark Thirty, even though they hadn’t come out yet. Like Matthew McConaughey in the first season of True Detective, I don’t entirely believe Bodhi, but it’s clear that Bodhi believes Bodhi. The premise is so patently ridiculous, but Swayze plays it so entirely straight that you start to believe it. He’s an incredible surfer, a natural leader, he’s great at karate (“back off, War Child”), and, inconceivably for a spiritual surf bro, apparently has an encyclopedic knowledge of college football, knowing the exact quarter when Johnny Utah blew out his knee in the Rose Bowl against SC a few years back. Who wouldn’t have a man crush on this guy?

One minute I’m laughing at Keanu’s line reads and the next I’m wondering if I can run off and join Bodhi’s surf gang. Help “show those guys that are inching their way along the freeways in their metal coffins that the human spirit is still alive,” and whatnot.

Where Busey and McGinley were playing the B-movie in the script, Swayze (and to some extent, Lori Petty, though she doesn’t get as much screen time) was playing the badass action movie Kathryn Bigelow (possibly our most baddest ass action director) was directing. How did he know? Was pure, fully-committed earnestness Swayze’s only gear, or did he have some kind of perception and foresight that gave him access to a world the rest of couldn’t see? (You know, sort of like Bodhi). The more I watch it, the better he gets. The look of balled-up fury on his face when the off-duty cop points a gun at him, and he has to kill a guy… I honestly think it’s one of the best action-movie performances of the entire ’90s.

I think part of what makes a cult movie a cult movie is that you can’t quite wrap your brain around it on the first go. Cult films have that scab-you-can’t-stop-picking quality to them that compels you to rewatch. The Big Lebowski is a perfect example, where you watch it for the first time, and even if you’re one of the few who really liked it the first time around, you’re still not entirely sure what just happened. That’s not to say Point Break is dense with meaning like The Big Lebowski or that any of it flies over your head — it’s not, and it doesn’t. But it is a strange mixture of tones. In such a way that upon first watch it might seem inconsistent or confusing, but upon further review actually makes it more compelling. I can never quite decide whether Point Break is bad-good or good-good, and that’s part of why I keep watching.

†The first few times I watched this scene, I loved it mainly because Keanu’s acting was so bad and Gary Busey’s lines were so incredible. That will probably always be the main draw. But upon this latest watch, it finally dawned on me that Johnny Utah is a quarterback. And so the tone of the scene isn’t just the old, “don’t throw in the towel, old man!” It’s that, plus, the quarterback trying to pump up his team before the last big drive (the pump-up scene in Revenge of the Nerds comes to mind). Gary Busey can’t help looking like the ex-jock he is (he went to college on a football scholarship), and Pappas totally falls for Utah’s meathead mind games. Makes so much more sense now, doesn’t it? Anyway.

Vince Mancini is a writer, comedian, and podcaster. A graduate of Columbia’s non-fiction MFA program, his work has appeared on FilmDrunk, the UPROXX network, the Portland Mercury, the East Bay Express, and all over his mom’s refrigerator. Fan FilmDrunk on Facebook, find the latest movie reviews here.