This Week In Posters: Horses, Blake Lively, And The Rock

NOTE: Yes, I have formatted this post as a slideshow. Not because I’m trying to squeeze more page views out of you, this particular format just seems to work best for these posts. If you prefer a single page version, you can view that here.

Yes, This Week in Posters is back. Try to control your excitement. We begin this week with Horses, which appears to be aimed at viewers who loved War Horse, but thought it could do with less war. One of the reasons I don’t get horse people is that there seems to be a weird sexual component to loving horses. Like, I’m a dog freak, but if you wanted to sell me a dog movie, you wouldn’t need some dog running through a dewy meadow with it’s fur backlit by a morning sunrise like Fabio on the cover of a romance novel. In fact you’d be better off making a Vine video of a pug with a KFC bucket stuck on his head. Horse people, I can never tell if they want to pet the thing or get f*cked by it.

This is the first of nine posters for The Age of Adaline (don’t worry, I won’t include all of them). They all star Blake Lively in different outfits!

I guess the point is that the film is supposed to be about time travel, but unless you look closely, it just looks like the calendar from Zoolander, where it’s not a movie so much as Blake Lively with the same never-changing facial expression in a series of different outfits.

It’s 1931 now, and guess what! Blake Lively is still pretty!

Quicksilver is so fast he always has time to eye f*ck you. Is anyone else surprised that Fox and Marvel managed to not get into a protracted legal battle over Quicksilver being part of both The X-Men and The Avengers?

I also hope they explain why his outfit has handcuff sweatshirt sleeves. Is it cold on your fingers when you run fast? Otherwise I have to think he’s going to have stuff slipping out of his hands from the lack of palm friction with those things. Doesn’t seem worth it, you ask me.

It seems like Marvel has about four pose options that they cycle through for all promo material. There’s the tripod landing, the heroic “come at me bro,” and this, which they usually reserve for the female superheroes, who want to look tough, but still show off their glutes. Anyway, sick delts on that robot, he must do hydraulic military presses or something.

As always, I can’t see Susanne Bier’s name without instantly thinking of Lars Von Trier talking sh*t on her during his famous Nazi speech. “I love Jews! Well, except for Susanne Bier, she still sucks.”

You know what’s a fun game to play? Check out the bad reviews of Susanne Bier’s latest film and imagine Lars Von Trier reading them, pinching his nipples and giggling. I still haven’t seen one of hers, but I have to admit they do look pretty sh*tty. This poster doesn’t help. I call this design “Instagram filter with horror movie font.”

At the very least, they chose a great pull quote for this one. “The less you know in advance, the better,” does help you give it the benefit of the doubt, that maybe they chose this boring a poster design to keep from ruining the movie. Otherwise it just looks like “Strong Woman In Headscarf Faces Adversity Part 27.” I see one of those at every film festival. Critics can’t get enough of it. Can you believe one of them described this as “subtle?” Shocking.

*Saves to Movies To Recommend For Mom folder*

You really don’t need much more than a pissed off Henry Rollins scowling and some bullet holes to sell a movie to me. This one proves that much.

I can tell this is going to be sexy, because it’s called “Honey Trap” and the title looks like it’s both referring to and censoring the actors’ genitals. Also, she’s wearing leopard print pants, and only the sexiest ladies wear leopard print.

Oh boy, Sean Penn tells us about all the chemicals that can kill us. Perfect choice, he brings such levity to serious subjects. I hope you can actually hear all the cigarettes he smokes while he narrates this.

I hope this actor doesn’t get typecast as “sad baby” his whole career.

Inside Out continues to look like the most boringly-animated Pixar project of all time. What happened here? How the hell did these boring Barbie dolls with different colored hair come from the people that gave us Wall E? Is this a movie or a line of troll doll ripoffs?

I didn’t even notice the diagonal titles in the last one. 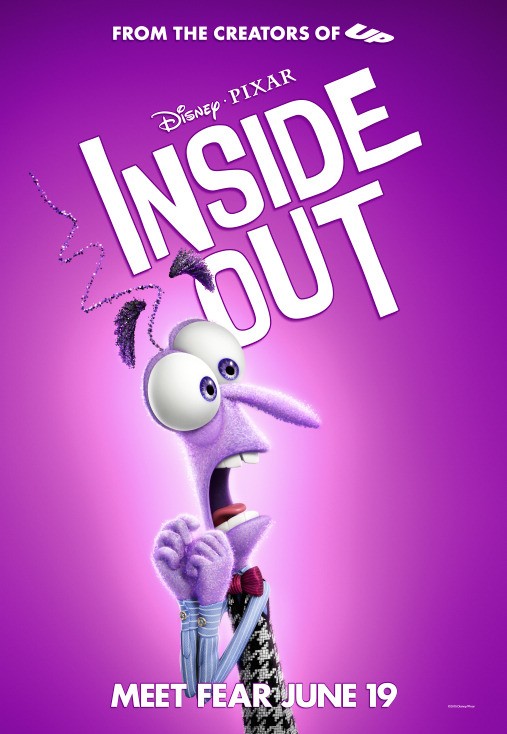 This is the best of the character designs so far, but even this looks more like a toy than a character.

Gotta love the throwback poster for It Follows. Not that It Follows is at all a throwback movie, it’s just an awesome one.

I assumed that this was a movie about Jim Morrison at first, I’m not sure if that’s what they were going for.

A Welsh teenager will become the cool kid of the town if a deal is made with his new American neighbour.

Apparently this was written and directed by the kid from Submarine, who is 24. Jerk.

This poster gets my vote as this week’s coolest design.

Two brothers tour Charlie Manson murder sites. One is a devoted family man. One is devoted to The Family.

Aw crap. It sounds more like an indie comedy than a movie about an actual Manson Family member. I was hoping for acid trips and naked hippie chicks and murder, but I guess Mark Duplass whining is cool too. Still a great poster.

This poster illustrates that the key to the YA market is fluffy hair, and literally everything else is secondary. Is one of these Ansel Elgort? Ansel El Groot? Ansel Smellcore? Hansel Hell Gore? Hansen Egg Sore? Pantsless Melbourne? Sorry, I always do that in my head whenever I hear Ansel Elgort.

I think the poster designer here just thought “guns” and “money” were symbolism enough and we’d just fill in the blanks for them. Wait, so the gun represents “offshore havens” and the money represents “our middle class?” Wait wait wait, no! I think the money is supposed to be the silencer, because the havens are silently killing the middle class. I honestly didn’t get that until I started to break it down. I think I was confused because at first glance it looks like a gun pooping money. Like this gun just sat down and took a big steaming money turd. Anyway, lots to ponder.

This poster’s okay, I guess, but I really think it could benefit from a giant silhouette of The Rock’s head. The selling point isn’t so much the earthquake as The Rock reacting to an earthquake.

It looks like Jennifer Aniston’s doing a Marvel tripod pose here. Either that or trying to sh*t in her purse. I could see that being a theater exercise. Is this a movie about Jennifer Aniston sh*tting in a purse? Because I have a very specific fetish. Anyway, this poster looks like something a Wes Anderson character would draw, accompanied by harpsichord.

A movie called “Sweaty Betty” about a 1000-pound pig that lives in the hood? Yes, please. I don’t know if this is the most visually stunning poster this week, but it’s definitely the one that most makes me think “you’re goddamned right I will watch this movie.”