‘Ant-Man’ Has Big, Funny Moments But Plays It Safe A Little Too Often 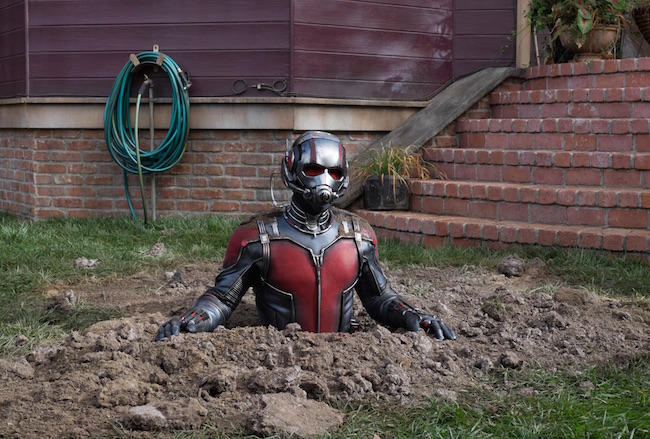 Part of me thought everything about the Ant-Man movie was just an elaborate and very long prank — we’d been hearing about this movie since before even the first Iron Man was released! Then, year after year, we’d get a steady stream of updates like, “It’s coming along,” and, “Edgar is still working on it.”

That Edgar in question is, of course, Edgar Wright: a director who seems to specialize in the genre of “cult classic.” Even when directing a movie that should be a surefire hit – like Scott Pilgrim vs. The World, which really should have made a lot of money – it still somehow becomes a cult classic.

I was in Hall H at Comic-Con in 2012 when, without much of an introduction, Edgar Wright walked on stage during the Marvel presentation and showed some test footage. After six years of production, we were still only at the test footage stage. Again, this all seemed like a big prank. I think I said out loud to the person sitting next to me, “Ant-Man will never be a movie.”

A year later, Ant-Man was officially added to Marvel’s schedule. A year after that, Edgar Wright was gone and Peyton Reed was sitting in Hall H, trying to win over a wary, pro-Wright crowd. It didn’t seem like so much of a prank anymore, but it did feel like a looming disaster. Not that Reed wasn’t capable (he very much is), but more that Ant-Man felt like a movie that was deep-fried in bad karma.

When I spoke to Peyton Reed last week, he said he feels like this movie is “a miracle.” As far as movie productions go, this isn’t really that hyperbolic. After Wright left, many people just assumed that Ant-Man would be shut down. Marvel certainly didn’t need an Ant-Man movie – it was doing just fine without one. Instead, Marvel brought in Adam McKay who (along with star, Paul Rudd) reworked Wright’s script and made something that’s … well …

Look, the fact that Ant-Man is at least serviceable seems like a testament to everyone involved. It’s certainly not bad – and there are great moments. It just feels patchwork at times, which I suppose is pretty much what anyone should expect from a script that’s been gestating for nine years and now has four credited writers that are all famous people.

We meet Scott Lang (Rudd) as he’s just getting out of prison. He’s a thief, but not just any thief – he stole from evil corporations and gave the money back to the people who were scammed out of their money. So, it’s not quite “saving the cat,” but we are establishing that Scott is a good guy, even though he’s a skilled burglar.

Scott also misses him family. Scott’s ex-wife (Judy Greer, who is in every movie this summer playing this kind of role) won’t let him see his daughter until he gets his life in order. But Scott can’t get his life in order because no one will give him a job because of his criminal record. (One of the funniest scenes in the movie involves Scott briefly working at a Baskin-Robbins.)

After receiving a tip about a loaded safe, and with no other options, Scott returns to a life of crime. After breaking into the safe, which turns out to be owned by a millionaire physicist named Hank Pym (Michael Douglas), Scott discovers there’s no money in it, just some sort of suit. (A suit, as it turns out, that can shrink a human to the size of an ant; hence the name of this movie.) This all turns out to be a very elaborate setup by Pym, because he needs Lang (after being trained by Pym’s daughter, Hope, played by Evangeline Lilly) to break into his old company in an effort to prevent Darren Cross (Cory Stoll) from mass producing shrinking suits that can be used by the military for nefarious reasons.

The problem with a movie like Ant-Man — the 12th movie in the Marvel Cinematic Universe — is that even though it sounds admirable to try and make this a true standalone movie, that’s now impossible. Guardians of the Galaxy came close because it’s set in outer space, and it was all the better for it, but even that movie had to bring in Thanos to set up the eventual big bad for the next Avengers movie.

Edgar Wright, a fan of the first Iron Man, didn’t want to connect his story to the rest of the Marvel universe yet. Marvel, realizing it’s impossible to just ignore the events of both Avengers movies, needed it to tie in. The problem is that they are both right and there’s really no great solution. When Hank Pym explains to Lang the repercussions of Pym’s technology being unleashed into the world, Lang’s first response is, “We should tell the Avengers.” Well, yeah, of course you should! Pym comes up with a half-baked reason why they can’t do that, but this is a problem that will plague these Marvel movies now that there’s so much interconnected story. Story, I should add, that will be well-known to any new character because these are always huge world events. If today a sentient robot lifted an entire Eastern European city into the air, we would all know about it.

(At one point, Ant-Man does meet a character that has been in other movies. I will not spoil who this character is, even though some television commercials have already done that. I found myself really enjoying this scene because it shows how Ant-Man will play with others in future movies and, as it turns out, it’s a pretty great dynamic.)

At the same time, Marvel has created what is essentially a serialized television show, only at the movie theater. This has turned out to be very popular, to the point that pretty much every other studio is trying to do the same thing with their properties. When Sony couldn’t do it with Spider-Man, they basically asked Marvel, “Hey, can we just join yours?” It’s become difficult for me to separate these movies from the rest of the series – and not in style or in a mean, “all Marvel movies are the same,” kind of way – but because this is a serialized story. How does this fit in? What Wright wanted is impossible.

And while watching Ant-Man, it felt like watching an episode of a television series – only it’s an episode I didn’t like quite as much as the others, even though I still find myself enjoying it at times. There are scenes that are legitimately some of the funniest that have been in a Marvel movie (the already much talked about battle that takes place in a child’s bedroom is a hoot) and Paul Rudd is impossible not to like. But even with such a weird concept about a guy who can shrink and then communicate with ants – seriously, there is a lot of ant action in this movie, probably too much; at one point the movie is convinced that you care about the well being of the ants – there’s way too much that feels familiar here. It probably needed to be much weirder, or not weird at all. Instead, we have something that’s in the middle. It’s a strange thing to accuse a movie about a shrinking man that can talk to ants of being “safe,” but there’s something that feels very safe about this whole thing. Then again, after this movie’s long and arduous road, it’s hard to blame anyone for just wanting to finally get this movie made.