‘Office Space’ Is Still The Best Portrayal Of Corporate Angst 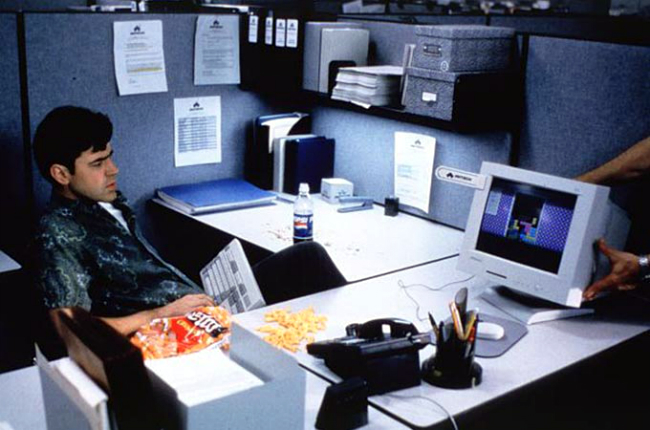 1999 was a strange and glorious year for movies. We collectively experienced peak philosophical script writing, present in such classics as American Beauty (for existentialists), Fight Club (for Nietzsche savants), The Matrix (for dystopian cyberpunks, and The Sixth Sense (for budding child psychologists?). These movies certainly expanded your consciousness, but they weren’t really… relatable.

Enter Office Space. This Mike Judge-directed comedy was more of a fantasy ride than the race scene in The Phantom Menace. Because sure, floating through space with robot aliens and Natalie Portman might be fun, but in day-to-day life, beating the living crap out of faulty computer equipment and setting your office on fire sounds a lot more satisfying. Peter Gibbons’ journey from depressed desk jockey to someone who gleefully does nothing for a living is a dream come true. Judge, known mostly for Beavis & Butthead at the time, created a cult classic with his first foray into live-action film.

The movie’s extremely quotable lines, delivered by fantastic actors such as Ron Livingston, Gary Cole, Jennifer Aniston, and Diedrich Bader, are part of what has kept it such a beloved film 16 years after its release. Check out these quotes that made it one of the meme-iest movies of all time.

On a late Friday afternoon, our office anti-hero, Peter Gibbons, tries valiantly to make a quick escape without catching the attention of his boss and villain, the droll Bill Lumbergh, hoping to avoid working on Saturday. Unfortunately, he fails at this task and is not only asked to work Saturday, but Sunday as well! Gary Cole’s portrayal of Bill Lumbergh has now become legendary.

“Uh-oh. Sounds like somebody’s got a case of the Mondays.”–Temp

This quote from Office Space exemplifies the spirit of the entire movie in one line: the horrifyingly obvious case of depression representative of a meaningless corporate existence, dismissed in one foul swoop by a well-meaning, overly cheerful co-worker–who you secretly want to strangle. ESPECIALLY on Monday. Who does this lady think she is? Garfield?

This bit in the movie, chronicling the miseries of a paper-pusher who happens to share the name of a famous soft rock singer, has continued to get laughs. So much so, in fact, that the real Michael Bolton did a Funny or Die sketch in which he portrayed the Michael Bolton of Office Space.

At the beginning of the movie, Peter Gibbons is seeing a therapist with his then-girlfriend, Anne, when he comes to the realization that every single day is worse than the one before. And even the therapist thinks that’s pretty messed up. So the therapist hypnotizes Peter to put him in a state of ecstasy and joy…and then the therapist clutches his heart and dies. Peter, still in a trance of happiness, decides he’s no longer going to work for “the man.”

“Well you don’t need a million dollars to do nothing, man. Just take a look at my cousin, he’s broke, don’t do shit.”–Lawrence

Despite being a blue collar construction worker, Peter’s neighbor, Lawrence, is the smartest character in the movie. When they discuss what each of them would do if they had a million dollars (to which Lawrence replies “two chicks at the same time”) Peter says that he’d just like to do nothing. But Lawrence knows you don’t need money to accomplish that goal.

“Michael, I did nothing. I did absolutely nothing, and it was everything that I thought it could be.”–Peter Gibbons

After following the advice of beer-guzzling zen master Lawrence, Peter decides to forgo his responsibility, unplug his phone and his alarm clock, and do nothing. For an entire weekend. It sounds like pretty much the best thing ever. Why isn’t Ron Livingston getting more high-profile work?

The mumbling character of Milton, played by Stephen Root, is actually the inspiration for Office Space. A few animated shorts of Milton aired on MTV and Saturday Night Live in the early-to-mid ’90s. In a supporting role in this movie, he is continually degraded, ignored, and dehumanized. Milton determines that if one more goddamned bad thing happens to him at Initech, like being the only one who doesn’t get a piece of cake for the second time, he’s going to set the building on fire. Who could blame him?

“Yeah, I just stare at my desk; but it looks like I’m working. I do that for probably another hour after lunch, too. I’d say in a given week I probably only do about fifteen minutes of real, actual, work.”–Peter Gibbons

Initech hires consultants to interview all the employees and evaluate the company’s efficiency and figure out who they can afford to fire. Peter Gibbons does something unprecedented: he tells the truth about how he spends his day. The results? They think he’s an excellent candidate for upper management!

Jennifer Aniston was starting to take on more and more movie roles in the middle of her Friends career, and her impeccable timing in Office Space certainly helped cement her role as a comedic leading lady. Haven’t we all fantasized about “expressing ourselves” to our boss like this before?

“I did steal something.” – Peter Gibbons

Anyone who has ever worked an office job has had visions of this scene running through their mind as they’ve gone about their day, dealing with malfunctioning computers and copiers and printers. After being fired, Peter, Michael, and Samir are being forced to turn in all their security details–as if they would steal something! But Peter has a surprise waiting in his trunk.

I’m pretty sure it’s against the law to write an article about Office Space quotes without including this line.