Why Is Boba Fett So Popular? And How Can A Boba Fett Spin-Off Movie Even Work? 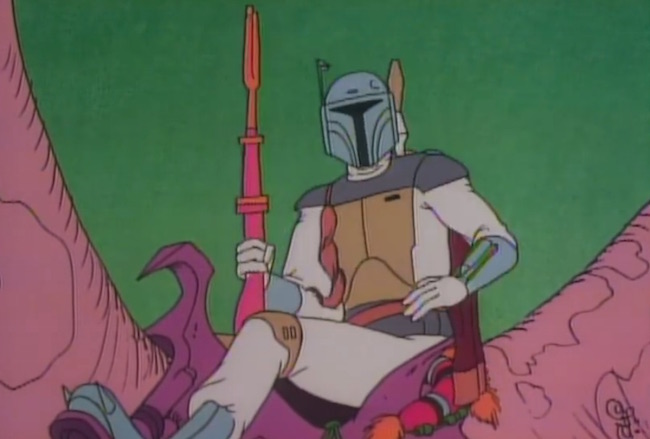 In 1979, a year before The Empire Strikes Back was released in theaters, Kenner released a mail-away offer for a new Star Wars character, Boba Fett. Originally, Fett was to feature a rocket shooting out of his jetpack — there’s a picture of a strange-looking Fett with this function on the back of some late ‘70s Star Wars action figure packaging — but this idea was allegedly scrapped over safety concerns. Later, to hide the depiction of a rocket-firing function that would never exist, Kenner placed a giant sticker over this promo, offering details about this new character that, until now, had only been seen briefly in an animated segment of the ill-fated 1978 Star Wars Holiday Special.

I’d argue that description — basically a way to hide a marketing recall — was the spark that fueled the almost incomprehensible love for Boba Fett, a character that does a lot of nothing in the actual Star Wars movies. A love so deep, that now it’s being reported that Fett is getting his own “origin” movie.

For people who don’t understand the love for Fett, yes, a lot of it does come from that action figure. First, the action figure looks cool — a design created by Joe Johnston, who would go on to direct Captain America: The First Avenger — and, more importantly, kids everywhere had an entire year to create their own adventures with this cool-looking bounty hunter that was a threat to everyone’s other favorite character, Han Solo. I promise, Fett had plenty more exciting adventures in the childhood bedrooms of Gen Xers than he ever did in the actual movies.

(In The Empire Strikes Back, Fett tracks Han Solo to Cloud City and alerts the Empire. Then he takes a couple of blaster shots at Luke Skywalker and misses. That’s pretty much it. In Return of the Jedi, he gets eaten by the Sarlacc.)

To get another opinion, I emailed Boba Fett aficionado and noted super-fan of The Empire Strikes Back (oh, and the co-creator of Lost), Damon Lindelof, to try to find out just why Boba Fett became so popular. Lindelof answered, “Four words: Star Wars Holiday Special.”

Lindelof continued, “I think I was too young to process what a hot mess it was (Bea Arthur… I mean… guys… BEA ARTHUR?!?!), but the standout was the Boba Fett cartoon. Forget about how cool he looked … but the sense that I was giving a glimpse at a character who was going to be in the NEXT movie in a day and age where the word ‘spoiler’ didn’t even exist yet. God, it just about blew my mind. Proofs of purchase were collected immediately.”

As Lindelof said, the first actual appearance of Boba Fett was during a short animated segment of the Star Wars Holiday Special. In this story, Han Solo and Chewbacca are in peril, so Luke Skywalker, C-3PO and R2-D2 attempt a rescue mission. This brings everyone to a planet seemingly covered in red goo – it’s here the Luke meets Fett, after Fett saves the trio from some sort of alien dinosaur-looking creature. Fett attempts to befriend Luke — to the point he keeps referring to Luke as “friend”; never a good sign — before eventually betraying Luke when it’s discovered Fett is working for the Empire. At the end, Fett escapes on his rocket pack. In the 10-minute running time of this animated short, Fett gets to do more than in the entirety of the six feature films. But, in a weird way, the less we knew about Fett, the better. The mystery of who he might be was far more interesting than who he truly was.

(In the ‘90s, there was an expanded universe story that identified Fett as a man named Jaster Mereel. This was later retconned that Mereel was not Fett. Then the entire expanded universe was rendered null and void, so none of this matters.)

And then Attack of the Clones happened.

This isn’t as much yet another diatribe on the problems with Attack of the Clones or the problems with the prequels in general, but more just pointing out how much of a corner this new Fett movie has been painted into by the events of Attack of the Clones. A year ago, I had had heard rumors that, indeed, a Boba Fett spin-off movie was in the works, but the problem was cracking the script. First of all, making a movie in which the protagonist is primarily known as the villain is always difficult. Second, even though we’ve barely seen Fett in action, after Attack of the Clones, we know way too much about him.

We know that Boba Fett (played by Daniel Logan in the film; who will turn 28 soon, if you want to feel old) is the cloned son of Jango Fett (who actually does have a pretty nifty fight scene with Obi-Wan Kenobi during Clones), so according to canon, this means that an adult Boba Fett has to look exactly like Temuera Morrison, who played Jango Fett in Clones. This is so deep in canon now that Morrison redubbed Fett’s lines in Empire, replacing the voice work of Jason Wingreen (who, with Fett, is probably best-known for playing the doctor at the Mayo Clinic in Airplane!, and, at the age of 94, is still with us), which is why it makes no sense to see that actors like Aaron Paul and Michael Fassbender are rumored to be sought after to play Fett. How in the world would that work? I’ve seen some suggestions that the actor could just keep the helmet on the entire time, but no one pays a big name actor for a big budget movie just so they can wear a helmet and have a voice that has to sound like Temuera Morrison. (Yes, Fassbender wore a big giant head in Frank; Frank is a low budget indie film.)

Even as much as the new Disney-owend Lucasfilm has retconned the Star Wars universe – Han shoots first again, eliminating the expanded universe – there’s not much they can do about the events of the prequels. We are pretty much stuck with what we learned about Fett in Attack of the Clones. So, how does the movie address this?

A popular solution seems to be something along the lines of the cloned Fett is killed, then someone else takes over for him. I suppose Fett’s voice in Empire could be redubbed yet again, but all of this seems so convoluted. The best solution is probably to hire an actor that somewhat resembles Morrison, but this would eliminated all of the Big Name Actors being thrown around.

Regardless, as someone who grew up with the many imagined adventures of Boba Fett, I’m excited for what Lucasfilm might be doing here (even though they no longer have a director; would it be the worst thing to give it to Joe Johnston, the person who actually created Fett?), I just don’t quite know how you make a good Fett movie based on the limitations that Attack of the Clones brings. Which, yeah, is frustrating because this used to be a character that had endless possibilities.