It’s kind of hard to believe Tommy Boy came out 20 years ago today. It has aged incredibly well, you can still toss out a quote from it – even a throwaway line – in a room, and odds are really good not only will someone recognize it, they’ll be able to say the next line. The premise was simple. Two coworkers need to go on a road trip to save one coworker’s recently deceased father’s business. It lent itself to riffing and did what a lot of comedy movies fail to do even today: it allowed its main characters to be themselves and stayed out of its own way.

Chris Farley had a presence that made every bit he was in immediately funnier just by the sheer fact that he was standing there. You knew he’d do something that’d make you double over laughing. He even gave cues to when it was coming through that little smirk he had or the way he’d tossle his hair a bit or shrug his shoulders. It was like Randy Johnson standing on the mound and starting his delivery. You could know the fastball is coming. You could know exactly where it’s going to be and focus in on that exact spot. And you’d still end up blown away.

Farley wasn’t just a supremely gifted physical comic, he was also a pretty dang good athlete. He played defensive line in high school in Wisconsin, and he showed real grace in his stunts for his size.

As Tom Farley Jr. wrote in The Chris Farley Show, his biography about his brother Chris, “Growing up, we didn’t have a lot of choices: you played sports. But at Marquette a dean said to Chris, ‘Why don’t you try out for one of the plays?’ Chris was like, ‘Guys don’t do that.’ But he did it anyway and eventually found out that he wasn’t an athlete who happened to be kind of funny. He was an actor who happened to be very athletic.”

This allowed for him to really shine any time a scene needed an extra burst of physicality or athleticism. Here are a few of my favorites.

This post could end here and still be a perfect representation of how amazing Farley was. He completely owns this scene. When we were discussing which clips to include, Dime Mag managing editor Spencer Lund said, “Chippendale’s is the greatest thing Patrick Swayze has done — that’s how good Farley is in the sketch. I say this as someone who has watched Road House and Point Break well over 20 times each.”

So Spencer isn’t exactly the only person out there who shares this view.

Aside from being the sole reason why any time I hear the words “Sloppy Joe,” “Navy Beans,” or “Meatloaf Sandwich” I start singing this song in my head, this is another example of Farley completely capturing the scene through dance. It isn’t all that sophisticated a concept – Farley dresses up like a lunchlady and dances around. But it didn’t have to be. Farley just needed to be on stage to be funny.

The ad agency did their job on these. You have a great concept which is Chris Farley acting out memorable college basketball moments. So they left it alone and didn’t try to overdo it. And it worked really, really well. I wish there was one of these for every great shot in history.

Farley did this interview from Hilton Head, where he was at a diet clinic, and he overcomes terrible questions by the call-in viewers and some ribbing from Miller to steal the interview with nothing but the weight room that he is conducting the interview from.

You also get to see Farley working out, where he casually puts somewhere between 225 pounds up and does a few reps while he’s talking as part of a comedy bit like it’s nothing. 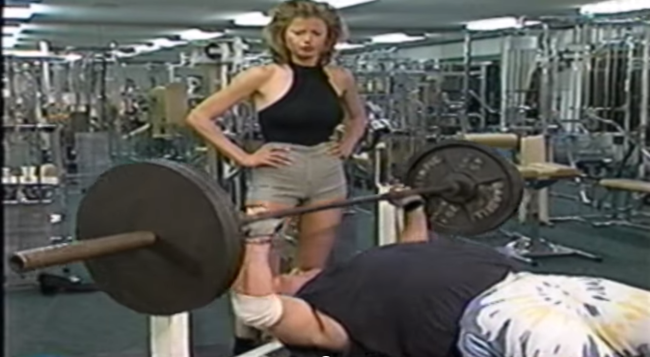 Although most of the stuff Farley, Adam Sandler, Kevin Nealon and Mike Myers are doing at the gym would technically be frowned upon, if I saw this in person I’d probably have dropped a 45-pound weight on my toe from laughing so hard. When they show Sandler squatting and slowly pan down to Farley who is actually leg pressing Sandler (and has been for about a minute straight), I lose it.

Farley and David Spade teamed up once again for Black Sheep, a movie where they’re touring around (again), but this time as Farley’s brother in the film is trying to run for governor. At one point in time they stop by a Rock The Vote concert, and Farley gives a speech. His flailing and yelling have so much sheer power, even if his final line didn’t exactly help his brother’s cause.

A skit that hits a little too close to home what with a majority of my family being originally from the Chicagoland area, the Superfans would have absolutely crushed it in the Twitter era. Any time you can get Norm from Cheers, Mike Myers, Farley and Robert Smigel using Chicago accents, eating sausage, talking about Da Bears and having heart attacks, well, it works.

In what really should’ve been a forgettable sketch from Nickelodeon’s All That, Farley popped over to Keenan Thompson’s recurring cooking show segment “Cooking With Randy,” and absolutely owned it. The only real props are a cart full of ketchup and a giant cake, and he just keeps going with it. Of course Thompson would eventually end up on Saturday Night Live himself for a lengthy tenure (and recently hosted a cooking show once again in a sketch when The Rock hosted).

Farley did this bit a bunch of times in a bunch of places, including a frenetic appearance on Conan O’Brien, but the original skit was written while Farley was on Second City. The character was created by Farley and Bob Odenkirk from Mr. Show and Breaking Bad/Better Call Saul and was modeled somewhat after Farley’s father. You’ve probably heard “Living in a van down by the river,” thousands of times if you were born any time before 1995.

What is remarkable about the skit is no matter what the location – an improv stage, the SNL stage, a talkshow set, Farley still made it his own. He used the space flawlessly and was always exploring the boundaries of where he could go and what he could do.

And Matt Foley seemed to be a Wisconsin Badgers fan, too.