Fact Check: Did Elton John Really Turn Into A Human Rocket Like He Did In ‘Rocketman’?

Watching Rocketman – the new Elton John biopic – was a wonderful experience, and how could it not be with that catalogue of music at its disposal? But while watching, there were a couple of moments that really gnawed at me – you know, that feeling where you think to yourself, “That just doesn’t seem right.”

And look, I know that you have to give biopics some leeway to tell a narrative story, so not everything is going to be 100 percent factually accurate. But we also expect at least somewhat a semblance of the truth. So, with a heavy heart, I’m just going to come out and say it: I have my doubts that, during a concert at Dodger Stadium, Elton John transformed himself into a rocket, blasted off into outer space, and exploded into a firework.

To settle this one way or another, I did some research. That concert happened in October of 1975 and, from most accounts, was one heck of a show. But in all the write-ups of this show, there’s not one mention of Elton John transforming into a rocket, blasting off into outer space, and exploding into a firework. I’m sorry, but if this actually happened, it would have been mentioned.

Looking at the setlist, Elton John did perform “Rocketman” that night – the song in which, if we believe the movie, Elton transformed into a human rocket – so at least that part is true. Searching the internet, there are numerous performances from that concert to watch. For instance, here’s “Goodbye Yellow Brick Road.”

But, unfortunately, Elton John’s performance of “Rocketman” from that evening doesn’t seem to be online. Though, “Goodbye Yellow Brick Road,” was performed after “Rocketman.” So, explain to me how Elton John could transform into a rocket, then explode into a firework, then come back to perform the rest of his set. I guess technically it’s possible, but it’s highly unlikely. Usually, once people explode into a firework, that’s it for their night.

So, did Elton John really transform into a rocket, launch himself into space, then explode into a firework? Sorry, but I’m going to have to say this never actually happened.

Did Elton John Transform Himself Into A Human Rocket: Probably Not 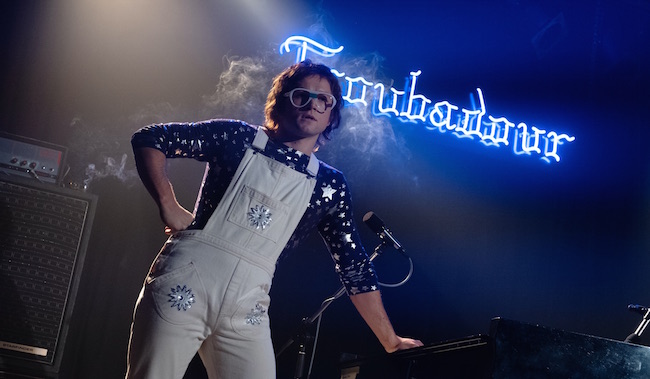 One other scene caught my attention as may be being factually inaccurate. Early in the film, at Elton John’s historic 1970 show at the Troubadour, as John performs “Crocodile Rock,” gravity ceases to exist as both John and the audience start floating toward the ceiling. Now you’d think if such a seismic occurrence had happened during this show it would be mentioned in the reviews. But, again, no.

The L.A. Times recently republished Robert Hilburn’s review of that very show and not once is it ever mentioned that gravity stopped working. Um, I’m sorry, but if gravity ceased to exist, even for a few seconds, I’m fairly positive it would have been mentioned here. And just to be sure, scouring some almanacs from 1970, not once is there a mention of a seismic or supernatural loss of gravity.

Look, I hate being nitpicky with this kind of stuff, but I’m highly skeptical this actually happened. And if it had, it certainly would have been reported in some way. So, unfortunately, it doesn’t appear like gravity didn’t, briefly, ceased to exist as Elton John played at the Troubadour.