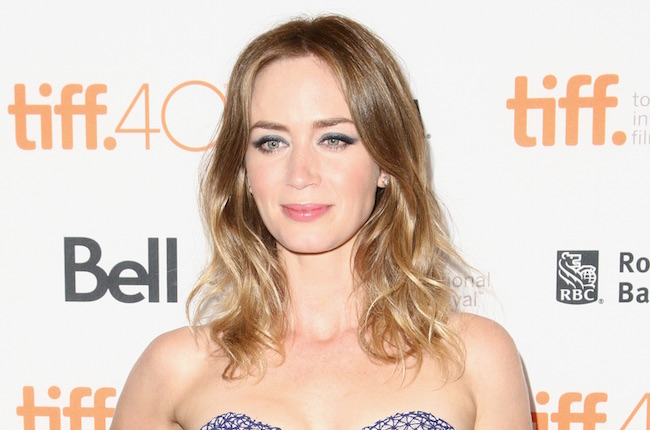 When you talk to Emily Blunt about her role in playing “strong” women in movies, she, at the same time, seems honored and hesitant – hesitant only because people like myself who bring this up are talking about roles in two specific movies: Edge of Tomorrow and Sicario, which is currently playing at the Toronto International Film Festival. Both roles feature Blunt carrying around a gun; so, naturally, she wants to know what someone like me means when we say the word “strong.”

In Sicario, directed by Denis Villeneuve (who directed Prisoners and Enemy), Blunt plays an FBI agent who is recruited by a cocky government official (Josh Brolin) for a top secret and very vague mission involving Mexican drug cartel leaders. As this morally ambiguous film goes on, Blunt’s character starts to question just whose side she’s on, if anyone’s … especially when she learns the true nature of Benicio Del Toro’s character’s role in all of this. Sicario is a very tense movie.

I met Blunt at her hotel in Toronto to discuss Sicario and where it fits in with the narrative of her playing strong woman. And we also discuss Tom Cruise and Chris McQuarrie’s recent comments that they have a perfect idea for a sequel to Edge of Tomorrow. Blunt hasn’t heard this idea yet, but she is certainly interested.

(When I first meet Blunt, her publicist and I start talking about Garbage Pail Kids for reasons that are too long to explain here.)

[Laughs] I love that!

I’m so happy you are working with Denis Villeneuve. Over the last few years, when I hear you are in a movie, you’ve gone from, “Oh, she’s always good,” to me being actively excited.

But he doesn’t have any of the tendencies that you hear, personality-wise, that come with being an auteur.

I do, too. But he can be intimidating. But with Denis…

He’s so not intimidating. He’s completely delightful and I find it interesting he explores the dark side in nearly all of his films. And, yet he’s an absolute peach of a person.

This is a tense movie.

He never wants to spoon-feed the audience. Actually, Fincher gave me my favorite quote recently. He said, “I just feel all films these days are so obsequious: do you want an explosion? You’ve got it. Do you want them to kiss? You’ve got it.” And they just follow a pattern and everything is quite derivative of something else that someone crunched numbers on because it worked.

And Roger Deakins shot this movie.

He’s the DP every actor wants to work with. The first thing Benicio Del Toro said walking on set the first day was, “I can’t wait to shake the hand of Roger Deakins.”

I won’t give it away, but by the time we get to the last scene, I had no idea what was going to happen.

How was it written?

I can’t say because it would be wrong … but we had an issue with the scene. It had a sort of slightly romantic feel to it.

Was it a alternative version of what we see, or completely different?

But what we see, there really is a feeling of anything could happen.

What’s very upsetting about the scene … what I felt in that scene is such a betrayal and what he’s asking me to sign away is everything I’ve ever believed in.

When I saw this movie, people were cheering at very inappropriate times. This is such a morally ambiguous movie, I think people just want to latch on to anything.

Yeah, I think so. I think, unfortunately, we have become … and I think America especially – has become completely anesthetized to gun violence as well, which is another issue. So, I don’t know if British audiences are going to react in the same way.

You’ve become front and center when it comes to a person who plays strong women characters in movies.

My issue with that is I don’t know what the definition of “strong” is. And the two characters they are talking about is where I’m wielding a gun. So, I take that with a real pinch of salt. I don’t necessarily see it as something I celebrate.

But the men have guns, too, so that kind of becomes a wash. And in both Sicario and Edge of Tomorrow, she’s an equal to them.

I know, but I don’t think Josh Brolin And Benicio Del Toro are getting asked about being a strong character. Do you know what I mean?

They aren’t, because we see strong male characters in every movie.

You see it a lot…

We don’t see strong women characters all the time, so that’s why people are mentioning it. And I think people are happy about it.

Oh, I think so, too. I think it’s great and I’m happy to contribute. It’s more of an anomaly to see a woman like that, so I think it’s a bit easy to say, “Oh, you’re so strong” — whereas I’m playing a character who is completely vulnerable throughout the course of the film.

She is vulnerable, but not in the usual way we see in the tropes that are used in movies.

I spoke to Chris McQuarrie recently about this and how he wanted Rebecca Ferguson to be an equal to Tom Cruise in Mission: Impossible – Rogue Nation and you to be an equal in Edge of Tomorrow.

Yeah, and I think my advice to writers and when I’m working with a writer on changing stuff – and I said this to Chris, too – I just said, “Write me as a guy, and leave the girl stuff to me. Write me as at fault and as interesting and as complex as you would a guy.”

He also said it would have been easy to have Tom Cruise rescue her to wrap the story up, but he refused to do that.

I think we are all programmed to seeing dynamics between men and women on film in a certain way. So, I think to break the mold with a film like Sicario or a film like Mission or a film like Edge of Tomorrow, I think it’s exciting. And I think the reason people are responding to it and are excited by it is because maybe it represents more of the reality of it.

But when we first started talking about it, you seemed a little miffed by how the subject is brought up.

Well, I think because I’ve heard it a lot now. “Oh, you play these strong women.” And I think it’s an easy thing to say.

Because the person who is asking it needs to understand what that means.

I think so, too. And I think people mean different things by it. But I think I’m probably getting those questions because it is not the norm, these women in these roles.

People are latching on to you about this. Do you not like that?

No, I do. I’m really flattered by it. [Laughs] But, at the same time, I’m slightly worried that I’m being put into a position where I might have to go to the gym a lot more. Which is what I don’t want to do! Which is probably why I’m playing a schlubby alcoholic next in The Girl on the Train.

Well, it has to be weird to be anointed.

I don’t want to be anointed that way just from two movies. I’ve done a lot of movies.

But there are two movies that are very conscious of what they are doing. I don’t think it’s false narrative.

No, I don’t think so. But I think maybe those roles stand out because it’s the more unusual dynamic to see. So, that’s why I think those are the roles people are associating with me. And I guess they stand out more to people.

Tom Cruise said he has an idea for Edge of Tomorrow 2. When I spoke to Chris McQuarrie he said he didn’t want to hear Tom Cruise’s idea because that movie was hell to make.

Yeah, that movie was so hard. And I don’t know what the idea is!

But Cruise told McQuarrie the idea and McQuarrie loves it. I’m under the impression you love that movie.

I would for sure! But the idea would have to be good; it would just have to be a great idea. I don’t want to dilute how great the first one is with a second one that’s not as good. I’m terrified of sequels, to be honest with you.

[Laughs] Well, we will see!

Yeah, I just did it. We just finished it in July. It’s really good, actually. It was really great to do. I played a villain for the first time. I played the Ice Queen.

No. I mean, The Devil Wears Prada was kind of a villain, but not really.

She was just a stressed out person. And once you get to know her you like her?

[Laughs] Maybe a little bit? She’s kind of hard to like. But this character is a villain with a lot of tendencies.

Did you get to ham it up?

Oh, my God! Charlize and I were ridiculous on set, it was like the crown-off that was going on. When the two queens were on set, everyone was like, “Ohhhhhh.” We were trying to overact each other. She’s the best, by the way.

I interviewed her once.

It’s funny you say that, because she does cuss a lot.

And when you thought of her, you cussed.

Is there a movie that’s on cable more than The Devil Wears Prada? It’s so rewatchable.

[Laughs] When I first met John (Krasinski, her husband) we were at his house and The Devil Wears Prada came on and I was like, “Don’t watch The Devil Wears Prada.” And it was the montage where Annie is in all the different outfits. And he sat down and goes, “that’s my favorite outfit.” He was waiting for it! Because he had seen it so many times!