In ‘Gods Of Egypt’… Does Geoffrey Rush Fight A Space Cloud Slug?

This weekend, you will be given the opportunity to see a movie called Gods of Egypt in exchange for whatever your local currency might be. This movie stars Nikolaj Coster-Waldau and Gerard Butler as rival gods fighting for power. Should you fight the crowds (of people in line for Deadpool) to see Gods of Egypt? Ahead, we answer every question you could possibly have about Gods of Egypt.

Q: In Gods of Egypt, is there a scene where Nikolaj Coster-Waldau turns into a gold bird and flies into space to meet Geoffrey Rush on a space station, who is fighting a cloud slug?

A: Yes. In Gods of Egypt, there is a scene where Nikolaj Coster-Waldau turns into a gold bird and flies into space to meet Geoffrey Rush on a space station, who is fighting a cloud slug.

Q: Why is Geoffrey Rush fighting a cloud slug?

A: Geoffrey Rush plays Ra, who must keep Earth safe at night, which is when the space slug comes out to fight Ra.

Q: So, Ra fights the cloud slug every day?

Q: So, where’s the sun during all of this?

A: Geoffrey Rush has the sun chained to his space station. It’s his job to drag it around Earth (which is flat, by the way). When Rush’s Ra passes under Earth, dragging the sun with him, he fights the cloud slug.

Q: When Gerard Butler read that part of the script, what was his reaction? 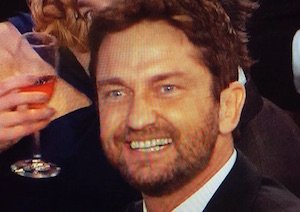 A: It’s a picture of Gerard Butler watching Jennifer Lawrence and Amy Schumer at this year’s Golden Globes. I like this picture because I’ve never seen anyone in my entire life with a more dazzled look on his or her face.

Q: Is this one of those movies that begins with long and boring voiceover exposition, filling us in on the entire story that’s happened up to this point?

Q: So wait, why are Gerard Butler and Nikolaj Coster-Waldau’s characters fighting?

A: Butler plays Set, a god who kills his brother and takes the throne to the Egyptian empire away from its rightful heir, Nikolaj Coster-Waldau’s Horus.

Q: That does sound bad.

A: Well, yes. But it also takes away Horus’ power to turn into a giant mechanical gold bird.

Q: How does Horus plan on defeating Set?

A: A thief named Bek (Brenton Thwaites) – who got his girlfriend, Zaya (Courtney Eaton), killed during a robbery – makes a deal with Horus: the one eye he already stole in exchange for Zaya returning from the dead.

Q: Does this work?

Q: Tell me more about the cloud slug.

A: Because the cloud slug is so weird and dumb it’s kind of great, but it’s one scene out of a movie that needed many, many more cloud slugs.

Q: So, what’s the plot of this movie?

A: I’m not 100 percent sure. I know at one point Chadwick Boseman’s Thoth gets his brain stolen by Set. That causes some strife.

Q: What the hell?

Q: So, is Gods of Egypt weird enough to justify buying a ticket?

A: You know, I almost want to say “yes.” But it’s not. It’s mostly just a February studio movie that is so, so close to being one of those movies you see projected onto brick walls at cool rooftop parties.

Q: But what if I want to see Geoffrey Rush fight a space cloud slug?

A: If you go in understanding that this is a very small part of an over two-hour movie, then fine: Go watch Geoffrey Rush fight a space cloud slug.

Q: Did Gods of Egypt deserve the criticism it received for not hiring actual Egyptian actors?

A: For the most part, yes. This is a real problem. But, any Egyptian actor who may have been up for a role in Gods of Egypt probably dodged a bullet by not being in it.

Q: Should I see Gods of Egypt?

Q: What if I did a drug before I saw Gods of Egypt?

A: What kind of drug?

Q: I have some Benadryl.

A: I’m not sure that will do much for you.

Q: If you’re going to be blurbed in this weekend’s commercials for Gods of Egypt, what quote do you think will be used?

Q: From now on, whatever movie you watch, will you just assume that Geoffrey Rush is in space, protecting us all from the cloud slug?

A: Yes. In The Big Short, as the financial institutions are destroying the world’s economy, I take some solace knowing that at least the space cloud slug won’t be hurting them on that day.