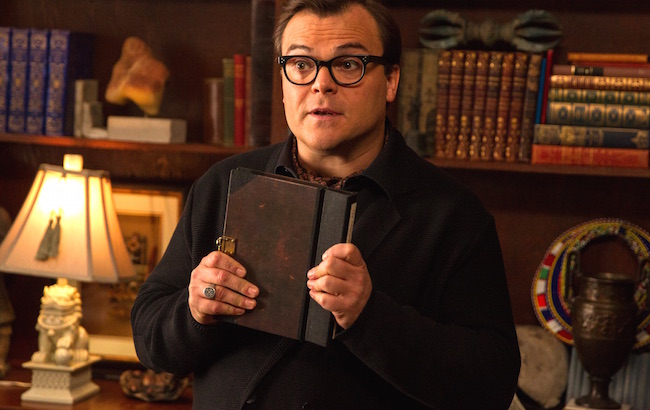 I barely missed Goosebumps. There are people who are only a bit younger than me who just love Goosebumps, yet I have gone these now-23 years since its first book without knowing really anything about it (except for that spooky font used for the word “Goosebumps”). It’s a true cultural blind spot.

Before seeing the new theatrical version of Goosebumps, I did the bare minimum of research (I read one Wikipedia page) so that I wouldn’t be completely lost. As it turns out, this is not a book series about a dashing hero named Cody Goosebumps, or whatever — but, instead, it’s a series of sort of unrelated stories. So now I had more questions: Which story would the movie be about? Do I need to be familiar with that story? Why is Jack Black playing the author of these stories, R.L. Stine? Is he going to be the narrator?

It’s sort of ridiculous, but seeing Goosebumps was really stressing me out.

So, as it turns out, the cinematic version of Goosebumps has very little to do with the book series (and, at the same time, everything to do with it).

Zach Cooper (Dylan Minnette) and his mother (Amy Ryan) are new in town (Ryan’s character has taken a new job with the local school system). Zach is a lonely boy and makes friends with the girl who lives next door, Hannah (Odeya Rush). But the house Hannah lives in is mysterious! There are always weird noises emitting and a strange man peering out of the window. Zach and his new friend, Champ (Ryan Lee), investigate and learn that the mysterious man who lives next door is the famous author, R.L. Stine. This is where everything starts becoming very fun.

To put it bluntly: Jack Black plays R.L. Stine as a dick. He’s a raging egomaniac who brags about his book sales and can’t stand to hear Stephen King’s name. At one point, Zach references the amount of books Stine has sold. Stine corrects Zach, explaining the difference between domestic and worldwide sales. Everything about Black’s R.L. Stine is wonderful.

Oh, yeah, how does this tie into Goosebumps other than it features an exaggerated version of the books’ author? The books themselves are supernatural – the entire series. If a book is opened, the creatures from that book will come to life. Fortunately, none of the books are opened during the course of this movie and everyone involved lives a peaceful life. (That last sentence is a lie.)

Slappy, a marionette-type of a ventriloquist dummy (and a very sarcastic creature to boot) becomes the leader of the creatures who wreck havoc on this small, sleepy town. They don’t have much of a motivation other than terror and mischief. And it’s up to Zach, Hannah (who has secrets of her own) and R.L. Stine to figure out a way to get all of the creatures back into the books. It’s fun!

Goosebumps is incredibly accessible to people like me who know nothing about Goosebumps. “Accessible” probably isn’t a fair word, because it doesn’t quite capture how entertaining this movie is. Look, I’m open to the fact that my expectations were something along the lines of, “a kids movie with a lot of inside references I won’t understand,” so, yes, I was pleasantly surprised, which always make a person like something more. I honestly have no idea how hardcore Goosebumps fans will react. Would they rather have each individual book turned into a movie? How would that be done? There are so many! The draw here for a novice like me is Jack Black’s pompous R.L. Stine, and good for the real Stine for being okay with all of that.

As it turns out, my anxiety was unwarranted. Goosebumps is a fun and sometimes scary (“scary” in the way an early Harry Potter movie is scary) movie that doesn’t punish the viewer if he or she knows nothing about the worldwide phenomenon known as Goosebumps. Hey, and from now on, when I have friends talking about Goosebumps, I’ll at least have a somewhat vague idea of what they are talking about. (Or, at the very least, I’ll be able to correct them if they confuse R.L. Stine’s domestic and worldwide sales.)