When we think back to the days long before the Internet existed (at least for public consumption), there are quite a few mysteries surrounding how society ever got by. Like, how did anyone find anything without a maps app? (I lived during this time on Earth and I don’t even quite remember; I don’t recall really ever using a paper map.) Or, how did anyone ever figure out what that song is they like that is playing at the bar? (The Shazam app is a miracle from the future that we don’t talk about nearly enough.) Most importantly, without the Internet, how did anyone publicly complain about Star Wars?

The problem for the editors of that original series is that they had absolutely no idea what was coming in the upcoming movies, so there was no way for them to steer the characters toward the events of the next movie. Also, Lucasfilm was fairly strict with what could happen to these characters, so no major events could really unfold, so this led to Luke, Han and Leia hanging out with human-sized rabbits. (And, worse, between Empire and Jedi, arguably the best character, Han Solo, was out of commission and relegated to flashbacks.)

Without an Internet back then to complain about Star Wars, people would write letters to the editor. In this case, people would write letters that were printed in the back of the Star Wars comic book in a section called “Star Words.” And, yes, readers would notice that often not a lot was happening and that the comic really wasn’t using Darth Vader (or this puzzling proposed Vader/Doctor Doom crossover), as Linda and Carol Mullaney (both!) pointed out: 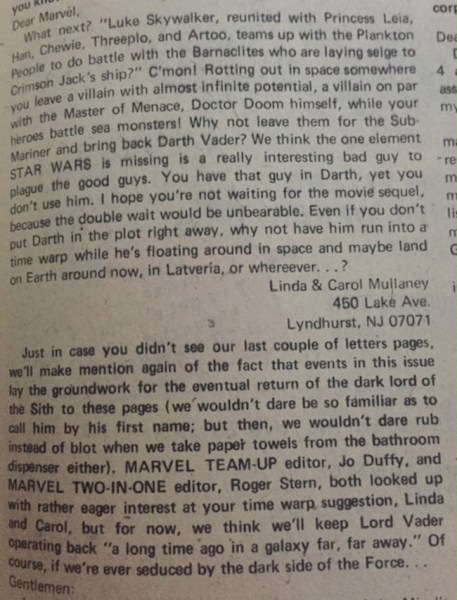 No, the Darth Vader/Doctor Doom crossover never did happen. A person named Tom Wales (who claims he’s with the Rebel Alliance) would also like to see Darth Vader return. 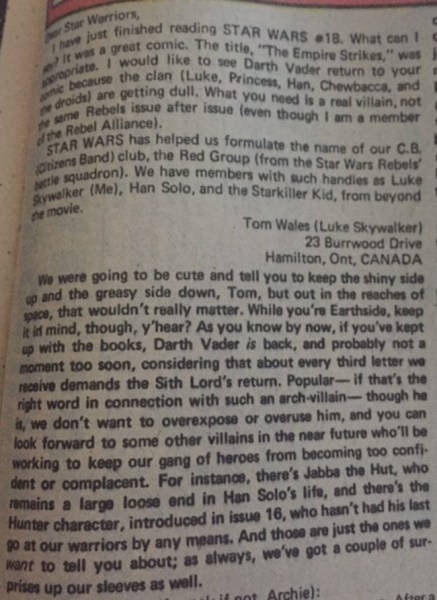 And, yes, quite a few letters were of the troll variety that we see today, like this letter complaining — not impressed at all! — about Princess Leia’s spaceship:

But the most interesting letter (a letter I tweeted early on New Year’s Day that I just then discovered probably gives more insight into my personal life than I’m comfortable with) is a complaint over the use of Luke and Leia. More specifically, that “they act more like young brother and sister than sweethearts.” Now, to be fair, this letter was written in 1979, a few years before George Lucas decided that Luke and Leia would be siblings — this was not the original plan (as our lead image confirms), nor was it the original plan for Vader to be Luke and Leia’s father; in the first draft of Empire, Vader is not even Luke’s father. But, whatever, it’s always amusing to look at something from the past that someone got wrong with a plot twist they had no way of ever possibly knowing. 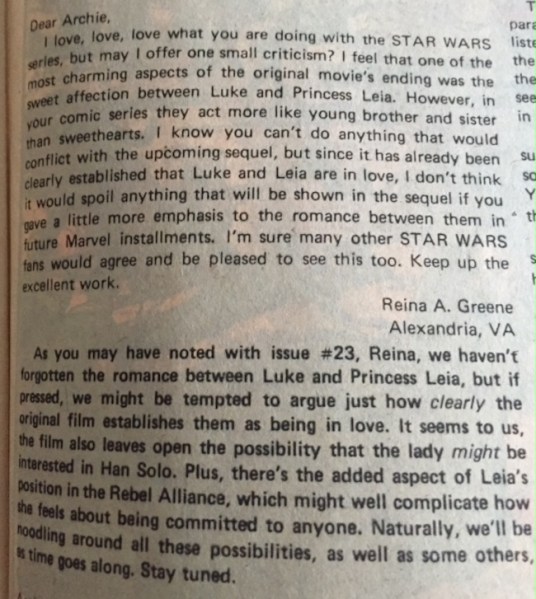 (But, hey, good on Marvel for noticing that Luke and Leia might not be in love — even though, at that point, they may very well have been in love).