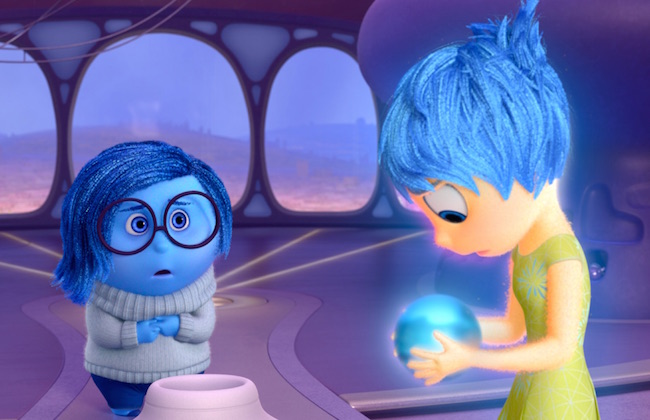 Growing up as an only child, there was nothing more terrifying for me than the specter of moving. This was something I had to do three separate times during grade school (between kindergarten and my senior year in high school, I attended four separate schools). Today, I live in New York City and stay in constant touch with my friends in Missouri because we basically live in the future, and that’s easy to do. (I know we all like to bemoan how all-encompassing current technology can be, but, boy, it really is pretty great.) But back then – and even though all four schools I attended were within the confines of the state of Missouri – leaving your friends behind pretty much meant saying goodbye forever. We could call, but it was expensive. We’d write physical letters, but that practice only lasts so long. Today, I am not in any kind of contact with anyone from the first three schools I attended. They are ghosts.

It’s no surprise that’s why Pixar’s new film, Inside Out, hit me as hard as it did. It mostly takes place in the mind of an 11-year-old girl named Riley, but Riley herself – also an only child – just moved from Minnesota to San Francisco. I was 11 years old during our second move, from a relatively small town in rural Missouri to the much bigger Springfield. That’s the move that hit me the hardest: When you’re 11, your friendships start taking on a new dynamic and outsiders aren’t really welcome. I was 7 when we moved the first time, and I remember everyone at my new school being nice. When I was 11, like Riley, we moved during the middle of the school year. Not only was I a new kid, I was the new kid. It doesn’t just feel like everyone is looking at you and talking about you, everyone actually is looking at you and talking about you. I remember wishing for another new kid to show up. Eventually, after a few months, this happened. And I remember my attitude towards him was, “Look at this poor schmuck.” Today, that boy is Leonardo DiCaprio. (Okay, that’s a lie, but it would have been a nice life lesson to learn at 11 that I missed out on being in the Pussy Posse because I didn’t befriend the new new kid.)

It’s interesting that director Pete Docter (read our interview with him here) conceived of Riley as an only child simply as a way to correct the problem of having too many characters. Originally, Riley was supposed to have both an older brother and a younger brother, but it was deemed too complicated to have insight into all of these characters’ brains – but I do wonder if the film would work as well with them. Again, being an only child, I often find myself rolling my eyes when a character in a movie is lonely, even though he or she has a handful of siblings. I understand these feeling can still happen, but it really is different to truly be by yourself.

(I admit I may be overvaluing the all encompassing relationship between siblings. I’ve met people who are close to their brothers and sisters, and I’ve met people who I’m surprised to learn later have a sister because that sister had never, ever been mentioned before. It’s kind of like when Reese Witherspoon showed up on Friends as Rachel’s sister. Like, where have you been? Why have we never seen you before and will never see you again? I know people who have Reese Witherspoon from Friends as a sibling.)

Still, the fact that Riley is alone, other than her parents, drives home what really does feel like a hopeless situation. At one point during the movie, Riley hears from her friend in Minnesota how great things are going. Nothing quite hurts like that. How dare things be going “great” without me.

In Inside Out, we meet Riley’s emotions, which are Joy (voiced by Amy Poehler), Sadness (Phyllis Smith), Anger (Lewis Black), Fear (Bill Hader), and Disgust (Mindy Kaling), and they all protect Riley’s core memories. The problem is that Sadness feels compelled to touch these memories, which forever alters how they are viewed. What used to be joyous memories of the past are now sad. They are ghosts.

Joy and Sadness eventually find themselves lost and away from headquarters, desperate to get back to Riley’s conscious. Without them, Riley is being controlled by Anger, Fear and Disgust. They do their best to fill in for Joy and Sadness, but can’t. No one likes admitting that he or she is sad. In a way, it feels like defeat. But without sadness, there can’t be joy.

I’ve obviously made a lot out of comparing Inside Out to my own experiences. People will debate if this is the best Pixar movie – What does that even mean? Why is that important? – but, for me, this is the one that hits home the most. This is what Pixar does, and people will find their own way to connect to Inside Out or they won’t, but everyone has the one Pixar that feels like it speaks to them. This one just happens to be mine.

I do wonder if things are different now. With social media and even just text messaging, if you move during junior high, is it easy to maintain those friendships that were impossible before? I suspect it’s now at least possible. But while watching Inside Out, I thought a lot about people I haven’t seen since I was in sixth grade. How people can go from being best friends to never speaking again. It’s weird I can still remember their names. I wonder if they ever think of me? (I’m guessing “no.”) Regardless, I suspect we wouldn’t have much in common anyway, but watching Inside Out reminded me of all of this. And it let me look back at these memories, these people, for the first time in a long time with joy.