Is Han Solo Stupid? An Investigation 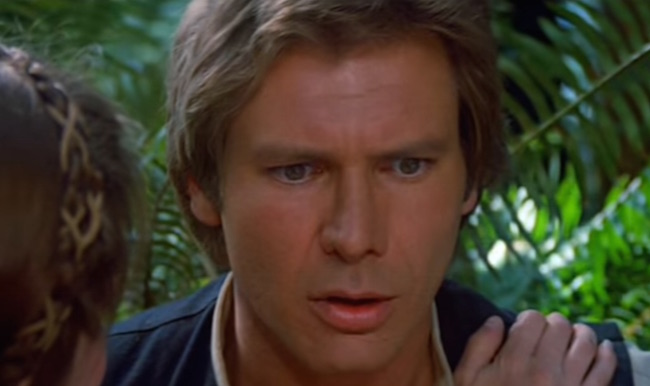 It’s been roughly three months since the dust has settled on Han Solo’s standalone movie, Solo: A Star Wars Story. And now the Lucasfilm train is rolling forward with the start of production of the untitled Episode IX – which will see pretty much every classic character returning other than Han Solo. (Though, it would be funny, after Han died basically three times in The Force Awakens, if he showed up again with no explanation: “Hey, how can I help?’ “Great to have you back, Han.”)

But the one quote I haven’t stopped thinking about since that film came out was a quote from Lawrence Kasdan that he’s been saying since at least 2015, “He’s cynical. He’s tough. He’s pragmatic. He’s not that smart.” These quotes resurfaced when Phil Lord and Chris Miller left Solo, with the point being made that Han Solo is not “funny,” but instead cynical and dumb.

Of the films in the Original Trilogy, Kasdan was only involved in Return of the Jedi from start to finish. He wasn’t involved with Star Wars at all and came on late to The Empire Strikes Back. (With Empire, Leigh Brackett wrote the first draft and it’s a fascinating thing to read and looks very little like what that movie turned out to be. Lucas then rewrote Empire himself, declining a writer’s credit. Kasdan then came on to rewrite the dialogue.)

But, here’s the question: Is Han Solo actually stupid?

Let’s go through all of Han Solo’s major moments in the Original Trilogy where he has to make some key decisions and we can decide.

Here’s where we first meet Han Solo. In this establishing scene Han is definitely overconfident and seems a little defensive when Luke and Ben had never heard of the Millennium Falcon. Han says the price for his services is 10,000, but over the course of the negotiation that figure goes up to 17,000.

Then, when confronted by Greedo, Han wastes little time dispensing of poor Greedo when he starts to seem like a threat. And then after all this, Han still escapes with all of his passengers unscathed even as Stormtroopers attack the docking bay.

Han’s moment here is to tell Luke and Ben that he’s seen a lot of strange things but he doesn’t believe in the Force. Now, in the context of the original Star Wars, the Force is a lot more mysterious than it became later. The case could be made pretty easily that it was all nonsense. As a viewer, we don’t see anything levitate until Empire, which is why it was so shocking the first time we see Luke use the Force to grab his lightsaber on Hoth. So in the context of what we know in this movie alone, Han isn’t being stupid, he’s just being skeptical.

Verdict: Skeptical, but not stupid

When the Millennium Falcon reaches what’s left of Alderaan, Han decides to follow a TIE Fighter in the hopes to destroy it, which is maybe a little stupid. But we can give Han the benefit of the doubt here that in situations like this before, not letting that TIE Fighter tell the rest of the Empire about the Falcon’s location is maybe a smart move. Regardless, once the Falcon is caught in the Death Star’s tractor beam, Han decides he’s going to fight the Death Star on his own, which is really dumb. But then Ben quickly talks him out of it and decide to hide instead. So at least here it shows Han is somewhat reasonable.

Verdict: Had some stupid ideas but didn’t really do anything stupid

For most of the Death Star sequence, Han just kind of goes along with other people’s plans. Luke is the one who comes up with the idea to pretend Chewbacca is a prisoner and Leia comes up with the whole trash compactor plan. The one decision that is actually Han’s here is the one to chase a bunch of Stormtroopers down a hallway. On the surface this is dumb, but it’s actually a smart move. If Han, Chewbacca, Luke, and Leia all run, they will be captured. But instead Han pretends that their group is much larger than it is and turns the tables on the Stormtroopers. Sure, the Stormtroopers figure this out, but Han has already bought their group a lot of needed time. (It’s this scene, more than any other, that I wish we had seen more like it in Solo.)

After escaping the Death Star (which, yes, was Vader and Tarkin’s plan all along), Han and Luke have a nice moment in the cockpit of the Millennium Falcon. Han realizes that Luke has feelings for Leia and, basically, decided to mess with him. “Do you think a princess and a guy like me…” to which Luke cuts him off and says, “no.” Han smiles because he’s gotten under Luke’s skin.

Han wants no part of an attack on the Death Star and he’s taking his money and leaving before the Rebel base is destroyed.

Assault on the Death Star

Han comes back in the nick of time to save his buddy Luke, giving Luke a clear shot on the Death Star. This is one of Han’s most heroic moments but it was also a little stupid. But here Han isn’t any more stupid than the entire Rebel Alliance.

Verdict: A little stupid but it worked out

THE EMPIRE STRIKES BACK

Han ignores the advice of that poor Rebel soldier about Taun Taun’s freezing and ventures out in the night to rescue Luke. This isn’t Han being dumb because he knows the risks, it’s just brave because he has to save Luke. And then Han is smart enough to use Luke’s lightsaber to cut open the Taun Taun and use its warmth to save Luke. Han also figures out that an attack by the Empire is imminent, resulting in an evacuation being ordered.

Han famously ignores the odds and flies into an asteroid field in an effort to escape an Imperial convoy. This feels less “dumb” and more “we are out of options.” In the end, it doesn’t really work out, but it at least buys them all some time. Also, Han tricking a Star Destroyer into thinking the Millennium Falcon is attacking, then attaching itself to the backside of the ship is very clever.

Han doesn’t fully trust Lando at first either, but succumbs to Lando’s charms. Leia even tries to warn Han that this all smells and Han just gets defensive about the whole thing. In the first two films, this is probably Han’s dumbest moment. Once C-3PO shows up in a box, they all should have gotten out of there as quickly as possible. But, during the carbon freezing scene, Han is smart enough to know that he needs to surrender. When Chewbacca starts to fight, it’s Han who talks him out of it, knowing it’s futile at this point. Han accepts his fate knowing it is the best thing for his friends.

Verdict: Han got tricked, which is dumb, but he was still smart enough to save his friends

RETURN OF THE JEDI

After being thawed out, Han tries to bargain with Jabba when he’s in no position whatsoever to bargain. When Han hears that they are being thrown into the Pit of Carkoon, he comments that it doesn’t sound that bad. Han then kind of just stand there while everyone else does the fighting. Though, Han does accidentally ignite Boba Fett’s jetpack, sending him into the Sarlacc.

Han accepts a promotion in the Rebel Alliance and, even though he’s the best pilot in the galaxy, he agrees to lead a ground strike force on a moon of Endor, making sure his greatest skill isn’t used at all.

Han does a lot of dumb things on Endor. When his team encounters two Biker Scouts, Han says he’ll handle it and of course gets caught when he steps on a loud branch and then gets punched. This results in Luke and Leia having to clean up Han’s mess, which eventually gets Leia separated from the rest of the team.

Then Chewbacca finds some meat randomly hanging in the forest and Han just looks at it like an idiot and says he doesn’t get it. It’s again Luke who has to warn them it’s bait, but it’s too late and Han and his team are captured.

At the Ewok village, Han finds Leia crying after she just found out Luke is her brother and Vader is her father, but Han can’t read the room and instead accuses her of being in love with Luke. To his credit, he comes back and apologizes, but come on, Han.

When Han and his team raid the bunker, his big plan is to do it “real quiet like.” (When did Han Solo ever used to talk like this?) Another tactic Han uses is the ol’ “tap on one shoulder but I’m really on the other side” technique. Of course, it’s a trap and Han and his team are captured, again. Then, finally, after R2-D2 is shot, Han thinks he can hotwire open a door and, instead, manages to close a second set of doors. It is actually insane that somehow, in the end, Han and his team manage to blow up the shield generator because Han Solo, on this mission, is the worst leader in the history of the Rebellion. It’s no wonder by the time we see him in The Force Awakens he’s just kind of floating through space smuggling monsters.

So the answer is that in both Star Wars and The Empire Strikes Back, Han Solo is fairly intelligent – or, at the very least, very clever. By the time we see him in Return of the Jedi he is a dumb guy who says stuff like “We’ll do it real quiet like.” The only in-story explanation is that the carbonite made him dumb.

Final Verdict: The Han Solo from Star Wars and The Empire Strikes Back is not the same character as the one from Return of the Jedi.