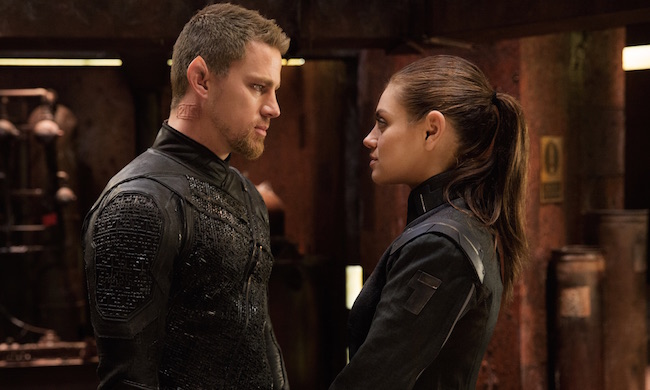 “I have more in common with a dog than I do with you.”

This line of dialogue between Caine Wise (Channing Tatum) and Jupiter Jones (Mila Kunis) is an example of something that, from the outside looking in, at least appears as if it’s fun. Especially coming from characters with names as whimsical as “Caine Wise” and “Jupiter Jones.” Instead, that line sort of embodies the entirety of The Wachowskis’ Jupiter Ascending, a movie that’s a lot less fun than it has the right to be, mixed with lots and lots and lots of expository dialogue that makes no sense. (As in this case: Wise claims he’s mostly dog, but he looks and acts almost 100 percent human except for some oddly shaped ears.)

Jupiter Ascending is perhaps the most “explainy” movie ever created that explains nothing. The more explaining that’s done, the less sense everything seems to make. This movie would have done itself a service just by explaining nothing, at least then the plot could have been debated as purposefully complicated, allowing viewers to find accidental and false hidden meanings. I may have enjoyed that; what we were given, I did not enjoy.

And the thing is, I was in the mood for a fantasy film. Any fantasy film. I’ve spent most of the last three days in bed fighting a flu I brought home with me from Sundance and mourning the loss of a pet that I had for the last 17 years who died suddenly on Monday. I do not mention any of this for sympathy. But instead to note that I was (A) already feeling emotional and (B) really in the mood for a movie to let me think about other things. Jupiter Ascending is soooo convoluted, it just wouldn’t allow me to get in that mind space that I so desperately wanted to be.

Another weird thing about Jupiter Ascending is that it presents this story as if we are already supposed to be at least a little familiar with the characters. It’s as if the Wachowskis had been working with these ideas and characters for so long they just assumed the rest of us had, too. In The Matrix, we get a chance to identify with Thomas Anderson because, before he becomes Neo, he’s just an office drone like the rest of us. In Jupiter Ascending, we witness the birth of Jupiter after her father was murdered by a highly skilled SWAT team of burglars who steal his telescope (that, of course, is never explained). So, we know something about her – and we watch her clean some toilets — but we don’t really know her before Caine Wise shows up to rescue the now-adult Jupiter with his floating shoes. (The shoes are pretty neat.)

The best way I can explain the “you should already know these characters” tone of Jupiter Ascending is as if you had never seen a Star Wars movie in your life, yet one day you decided to watch Attack of the Clones — another movie with a lot of exposition, yet very little character development. But, at least in Attack of the Clones, a fair assumption can be made that you already know who Yoda is before he starts doing somersault acrobatics. When Caine Wise first appears in this movie, it really does feel like the film wants you to think, Ah, yes, my favorite character, Caine Wise. How we’ve grown with you over the years. I hope you succeed again, old friend. The truth is, after spending over two hours with Caine Wise, I still don’t know much about Caine Wise. (We are told he’s a man/dog with a past, we never really hear about that past.)

The main thread of the plot is that Jupiter Jones has unknowingly inherited Earth, and aliens – who hide out inside Jupiter (the planet, not the person) and who use Earth to harvest youth-providing cells from our bodies — want to kill Jupiter so that she can’t inherit Earth. (As evil as these aliens are for harvesting us, they won’t dare cross the contracts of intergalactic real estate laws.) We are told that Jupiter is our queen because bees won’t sting her and bees know these things. (I have never been stung by a bee, so my hopes for being in charge of Earth are still alive.) Caine Wise is then sent to Earth to rescue Jupiter, which he does over and over and over again, sometimes without a shirt and sometimes with a shirt. Honestly, I think 80 percent of Mila Kunis’ dialogue is something to the effect of, “What’s going on?” or “Who are you?” or “Where am I?” She just never seems to know what’s going on and always seems to need to be rescued, but, luckily, here comes Caine Wise skating in on his hover shoes. Every. Single. Time. (Caine Wise comes skating in on his hover shoes to save the day so often during Jupiter Ascending that it really could be a Saturday Night Live sketch.)

I suspect Redmayne (who will most likely win a Best Actor Academy Award at the end of this month) was having the time of his life playing the main villain, Balem Abrasax. (As a side note, George Lucas doesn’t get enough credit coming up with character names that are “other worldly,” yet sound sort of normal. Lando is a good name. Balem Abrasax is not a good name.) From watching Redmayne, I get the sense he just assumed that everyone else was going to be hamming it up, too. I can only imagine his horror when he watched Jupiter Ascending and realized that everyone else is taking the material super seriously. Redmayne sort of whispers his lines in the most over-the-top way that can be done through whispering. He sounds like a more quiet version of Mathesar from Galaxy Quest. But the fact that everyone else is taking their roles seriously makes it look like Redmayne is, too, so instead of Redmayne’s performance coming across as “fun,” it comes across as ACTING. In another movie, we’d be hailing Redmayne’s work – it kind of has a weird Gary Oldman in The Fifth Element vibe to it – but in Jupiter Ascending, we cringe.

To be completely honest, I really dislike being negative about a movie like Jupiter Ascending. It’s obvious how much of the Wachowskis’ heart and soul went into this movie – and it’s always a nice thing to support original outer space themed science fiction, because it’s so rarely done. And Jupiter Ascending is an extremely pretty movie (someday it will be projected on a brick wall with no sound during a hip party that you attend). But Jupiter Ascending, with its plot asides that go nowhere and character motivations that make no sense, feels like a movie that had an hour or so trimmed from the running time. There has to be an explanation for this movie sitting somewhere out there on the cutting room floor. (Or the cutting room digital file folder, or whatever.) I can’t imagine it would have made Jupiter Ascending better, but it had to have made it more coherent. Again, I was in a place where I desperately wanted to visit this new world that the Wachowskis created – to be immersed into this world — but this movie just won’t allow it … as it endlessly explains to you why you can’t come in, even though that explanation makes no sense.