Paul Feig On ‘Spy’ And Why He Was Surprised To Hear About The Other, All-Male ‘Ghostbusters’ 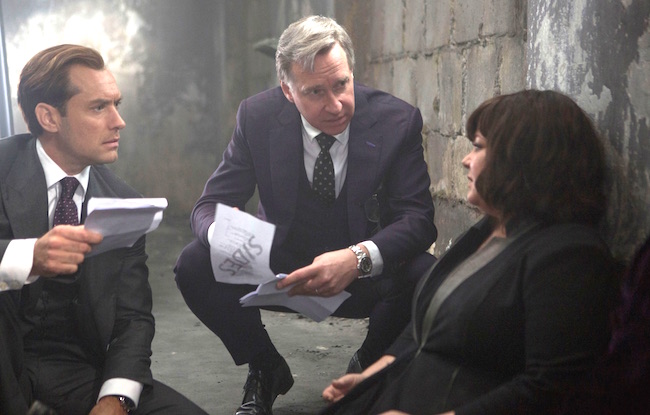 Feig’s latest film is Spy, his third directorial collaboration with Melissa McCarthy (which also includes Bridesmaids and The Heat). McCarthy plays Susan Cooper, a CIA analyst who is thrust into fieldwork after her partner (played by Jude Law) disappears. And just like McCarthy stole Bridesmaids (leading to an Oscar nomination), Spy just may very well be stolen by Jason Statham, of all people, who plays a way too overconfident CIA agent who, at best, is adequate. (It’s fun to watch Statham have fun with a comedic role.)

Feig is, of course, also directing the Ghostbusters reboot that will star McCarthy, Kristen Wiig, Kate McKinnon and Leslie Jones. A few days ago, Feig retweeted a man who wished death upon him and the cast of the movie, hoping that would stop the production of the film. Feig explains why, after a long debate, he decided to acknowledge that tweet, which is the epitome of some of the misogynistic hate he’s received since the new film was announced. Feig also talks about the other, “all-male” Ghostbusters movie that’s been reported (one Chris Pratt denies knowing anything about) and explains that he was just as surprised as the rest of us when he read those reports.

Jason Statham, of all people, is a comedic breakout from Spy.

It’s funny, I always like it when somebody is a big breakout, even if they’re famous already. He’s so good. I wrote the part specifically for him because I’ve been such a fan for so long and I was dying to figure out how to get him into a comedy. So when I came up with this part, it’s like, okay, this is exactly how we do it.

Even from the trailers, I assumed he’d be “the guy who knows what he’s doing.” You skew that very well.

You know, I look at it like that he’s not an idiot, he’s just made two very large mistakes at the beginning of the movie. One is quitting and having his earpiece person out of his ear, and the other is just he’s so off his game because this woman he just met can’t believe is doing his job is out there. So, he’s just making really bad decisions.

Is he based on anyone?

No, I don’t think so. You figure that all the classic kind of spy heroes that we’ve had in movies, they are so out for themselves; they are such alpha personalities. Originally, it was actually written that he was sent by the government to tail her and make sure everything is okay, but then it seemed like more fun to have him go rogue and he’s completely without any help from his normal team that kind of makes him look better.

What inspired Spy? It can’t just be James Bond; that seems too simple.

I didn’t want to do a spoof or a parody or anything, I just love the spy genre. So I was always like, “I want to make one of those, but I’m a comedy guy.” So, how do I make it funny and make it a real spy movie? The first thing I thought was, “What if you just have somebody become a spy who isn’t normally a spy?” That’s been done before, but I love writing for funny women and it would be fun to have a female spy go out and be completely undervalued, then see what she does. It’s an aspirational tale of all of us who worked under people in the past and we go like, “Oh, my God, they are so good and I could never do what they do.”

You’ve mentioned how you love working with funny women and it’s what you want to do with your career. Why is this so difficult to still get these movies made? When you look at Bridesmaids or even go back to 9 to 5, audiences loved that, then it stopped happening.

Yeah, everything got completely testosteroned. I mean, all it really boils down to is who is getting to write and do the stuff. You only have the take on the world that you have, and all I can think of is comedy because that’s where I’m from. There are tons of funny guys and some I know were nerds in high school and didn’t have good relationships with the girls they wish they could date, or whatever. So, when they make it big, it becomes almost like you just latch onto sort of the revenge factor. I don’t know, you can only really write about what you know. And if you don’t just, in general, hang out with women and aren’t friends with women and your only thing is like, “Yeah, I have a girlfriend, but I still have all my guy friends and she goes out with her girlfriends and I go out with my guy friends and occasionally I have to stay home with her,” you’re not going to get the most balanced review of a woman. Adverse, it’s the same with a woman writing guys roles sometimes. I mean, that’s why I think you need to have everybody in there working on stuff; it’s checks and balances against all of us doing a stereotype against the opposite sex or just somebody you don’t know.

Rightfully so, people look at you as someone who has done a lot of good getting comedies with women made. How conscious of that are you? Joss Whedon had a long history of strong female leads, but then got a lot of heat for Avengers: Age of Ultron. Do you feel you’re held to a higher standard?

Yeah, I try not to worry about that too much, just because, for me, it’s not really a political mission other than I got started out of the frustration of seeing all of these funny people who weren’t getting to work – and being really poorly used. Where an audience could watch a funny woman and not like her because he’s playing a mean character. It’s like, “Oh, this person is really funny,” but now people are walking away, “Oh, she’s terrible and she’s so mean.” I’m like, “that’s not good.” So, that’s kind of where it started: just this frustration of being told, when I would want to do something with female characters, “Well, no, they can’t be in the lead because then we can’t sell it internationally,” and that, “international markets won’t go see movies starring women.” So, you’d hear that a bunch and go, “Well, that’s the business sense, I guess that’s right.” And then you just eventually go, “Oh, so that’s it? For the rest of eternity women can’t star in stuff?” So, let’s try to change that because the only thing Hollywood responds to is financial success. They are a business, so don’t look to Hollywood for altruism, because that’s not what they do.

Well, that was the terrible litmus test that was put on Bridesmaids. That if it didn’t do well, it was going to be an example to the industry that women can’t star in their own movies and it was kind of like, “that’s f*cked.” I mean, when that comes out, there is a giant problem. We are just the tip of the iceberg on trying to figure it out.

When the cast of your Ghostbusters was announced, I was surprised at the amount of people who weren’t yet familiar with Kate McKinnon and Leslie Jones. Those people are in for a surprise.

Oh, totally. And that’s what’s exciting. That’s the fun part, having people that people know and having new people. That’s why it was so much fun putting Miranda Hart in Spy. Yeah, I like it to be a mix of discovery… the old and the new; the comfortable and the challenge. Well, not challenge, but the discovery. It’s so great. Having people you know legitimizes the presence of the people you don’t know.

So, when the news broke on this other, “all-male” Ghostbusters, were you just as surprised as we were?

Yeah, I was very surprised.

I’m still confused about this other Ghostbusters movie that was first reported as an “all-male” version. Now Chris Pratt is saying he knows nothing about it. Is this even real?

I honestly don’t know. I know they want to have this bigger Ghost Corp thing that Ivan Reitman wants to do. But, outside of that, I honestly do not know. All we are doing was trying to do our thing and we were all set with that. You know, it was sitting dormant for 25 years because nobody else wanted to do it. Then once I set it in motion, suddenly it became this storm. You know, I was proud that my idea for the studio cracked it open and got them interested. Look, everybody had turned it down. All the top comedy people turned it down because it’s a hot potato. And I did, too.

People aren’t even high on the second Ghostbusters. How do you do a third direct sequel without the full cast when the second, with the original cast, isn’t even highly regarded?

Well, that’s the thing. And it would have required the audience to have a working knowledge of both. I don’t know, after 25 years, all I can say is that the only way I know how do it, and everybody gets all mad at me on Twitter when I say that, “Oh, so since that’s the only way you know how to do it, now we’re stuck with it.” It’s like, “Guys, I don’t know what to tell you. They came to me. If they went to you guys, you could do it.”

You would think I am! I mean, my God. This weekend, some guy wished, not only me, but the entire cast would die so we wouldn’t be able to make the movie.

You retweeted that. Why give that guy his moment?

Well, we all wish you a long and prosperous life! https://t.co/hYJ1R4nfw2

You know what? I never, ever give an audience. But that one? I just found that one, man, if this is how you look at the world, I gotta call you out on it. I’ve gotta call you out on it because that’s f*cked up. Look, it’s a comedy. We love comedies! They make us happy! But you want five people to die? I never, ever do that. I debated and debated and debated and I was like, let me send him a nice little message like, “Hey, I don’t feel that way about you.” Look, I get it. People are passionate about this. I totally get that. And I know some people aren’t happy with this reboot, but again, this is the only way I know how to do it, And all I ask is that you just wait and see it and if you hate it after you see it, then sure.