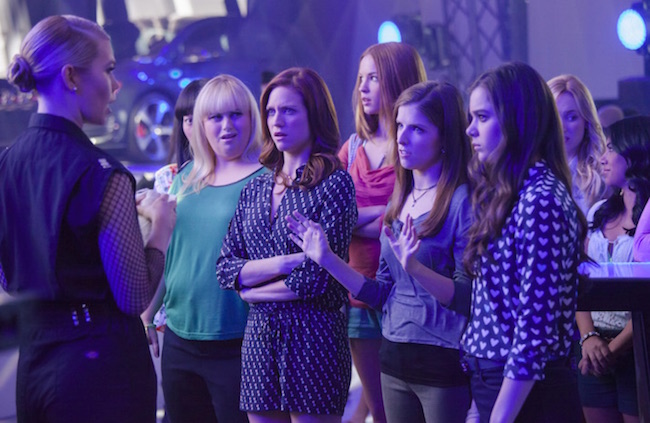 When the original Pitch Perfect was released in 2012, I was caught completely off-guard. It was one of those movies that I had just assumed “wasn’t for me,” and I found myself actively dreading the prospect of watching it. Pitch Perfect is just an honest to goodness great time at a movie theater. And I wound up loving it so much that, in my excitement, I wrote the film a literal love letter. Now that I’ve seen Pitch Perfect 2, well, I think it’s time to break up.

I have to say, I haven’t felt this deflated after seeing a movie in a long time. I had really been looking forward to Pitch Perfect 2 and I felt myself actively hating it while watching. That’s a pretty difficult trick to pull off, because when I’m anticipating a movie, I usually will try to make excuses for that movie while I’m watching it. I mean, I want to enjoy everything that I’m watching … being miserable isn’t fun. It’s only after that I have to make a critical decision. But to get me to turn so drastically while I’m watching a movie that I couldn’t wait to see? Oh, boy.

A major difference this time is that Jason Moore — the at the time first-time director of the first film, who is now in the running for the new Spider-Man film — is gone. Elizabeth Banks helms this film (she also produced the first film and this sequel), marking the first time Banks has directed a full-length feature. Yes, the first film was about music, but the plot did a good job of turning what are essentially low and somewhat silly stakes – a college a cappella competition – into something that at least felt super important. The reason the first Pitch Perfect is so loved is that the plot and the performances worked symbiotically to make something wonderful. In the sequel, everything is so scattershot — I’d argue there’s really no plot, just a series of endless subplots — it’s almost impossible to care about anything that’s happening. And even the musical performances just don’t have the oomph that they did in the first film.

When the film opens, the Bellas have just performed for President Obama (who we see in archive footage), which goes awry when “Fat Amy” (Rebel Wilson) rips her pants open during the performance, leading to a suspension of the group that makes absolutely no sense. Making even less sense, the group is allowed to perform in the World Competition, and if they win, the suspension will be lifted. But they can’t win, because everyone in the world hates America, so the Bellas will have no chance at winning. (This “hatred” is mentioned many times during the film, though we never see any actual proof of it. By the time the Bellas perform at Worlds, the audience seems to like them just fine.)

During this suspension, the Bellas are barred from accepting any new members, but they do anyway (Hailee Steinfeld) and there are no repercussions. Another subplot is that Beca (Anna Kendrick) has an internship at a recording studio, but is afraid to tell anyone in the Bellas. And once the other Bellas find out, they don’t really seem to mind that much. This entire movie is about made up controversies that either have no repercussions or that no one seems to care about in the first place. Unlike the first film, nothing feels important. And if the characters don’t seem to care, why am I supposed to care?

There’s a lot of singing in the film, but unlike the first film, it doesn’t feel natural to the story. In the first movie, characters would sing in competition or sing while practicing. Now, they just sing whenever they feel like it, as if it’s now a true musical.

About halfway through the film, there’s a scene in which the Bellas are mysteriously invited to a mansion. David Cross shows up and explains how much he loves singing competitions, so the Bellas compete against other teams in David Cross’ basement. This scene has nothing to do with the rest of the movie and just feels like one long non sequitur. Things like this happen a lot during Pitch Perfect 2, because that’s what happens when a movie has no real plot.

(I debated if I should get into the series of inappropriate and arguably offensive jokes that are told during Pitch Perfect 2. I’ll just leave it at this: The characters who say these lines are supposed to be offensive, so I completely understand what’s being attempted here, but they just didn’t land and felt out of place.)

The thing is, nothing is going to stop you from seeing Pitch Perfect 2, and I can’t really blame you for not listening to me. If I were you, I wouldn’t listen to me, either. I know how I felt before I saw Pitch Perfect 2, and nothing was going to keep me away. It’s just so disappointing that a movie that was so fun and so original is followed up with something so flat and so uninspired.